I haven’t talked too much about my time as an accountant for the city where we resided in California. The finance department of any business sees monetary impact of all the different things that go on. As a result, I learned a lot about what makes it tick. While most of what I did was based on general accounting that I knew from working as an accountant elsewhere, there were a few things unique to the city. One of the first times I scratched my head and needed to ask for further information involved an account called, “Park-in-lieu”. Whenever the city would zone an area as residential, they allocated a specific amount of space for a neighborhood park. The developers of that land had the option to donate a section of land to the city to be used as a park instead of being another house. In lieu of that, they could opt to pay a fee. There would be one more house, but one less park. Which route the developer opted to take was contingent on the demand for the property. I’ve often wondered whether there are other zoning policies that are contingent on the developer. We decided to put the development decisions in our own hands during game night by playing Zoned Out from Grey Fox Games. 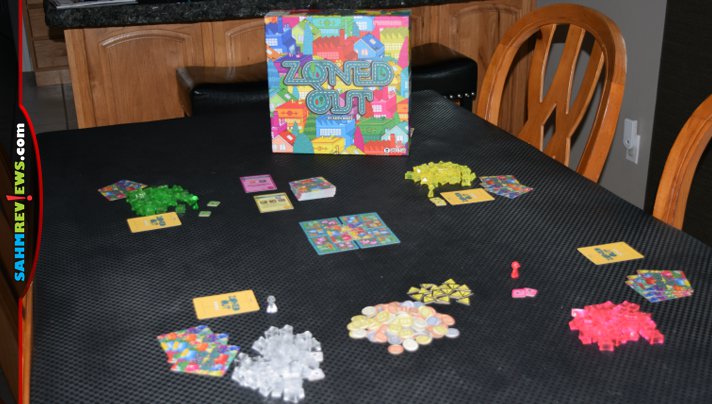 A game of Zoned Out can play up to four people. During setup, each player will select a color and take the Deed tokens, City Planner pawns and building pieces based on the number of players. Create a general pool that includes the redraw and victory point tokens. Separately shuffle the Secret Objective cards and City Cards. Deal six objective cards and return the remainder to the box. The cards are distributed evenly with remainders being placed face-up in the center of the table. The starting player will get two City cards and everyone else will get three to start the game. Four city cards from the top of the deck and the Downtown card are used to start the development.

You’re working together to zone and create a city. But don’t misunderstand, it’s not a cooperative game. You’re competing to develop residential, commercial and industrial zones, libraries, stadiums, train depots, parks and museums. In addition, you’ll deal with unwanted parking lots and abandoned buildings. Each turn involves two to four steps. The first step is to redraw and is optional. The second (playing a card) and third (moving your City Planner) are mandatory. Step four is optional based on the movement of your City Planner. The final step (also mandatory) is to draw a new card to get back to the three card hand limit. 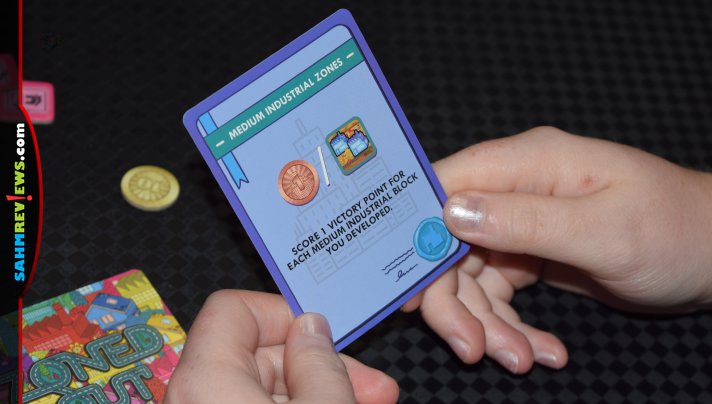 Before I explain the steps of your turn, I want to discussed the secret objective cards that were distributed during setup. These cards outline ways to score victory points at the end of the game. The ones in the middle are public knowledge, but each player also has one. Unlike other games where these secret cards are individual goals, in Zoned out, all players will score all secret and public cards. As you take your turns developing the city, keep your goals in mind and pay attention to what others are doing as well. 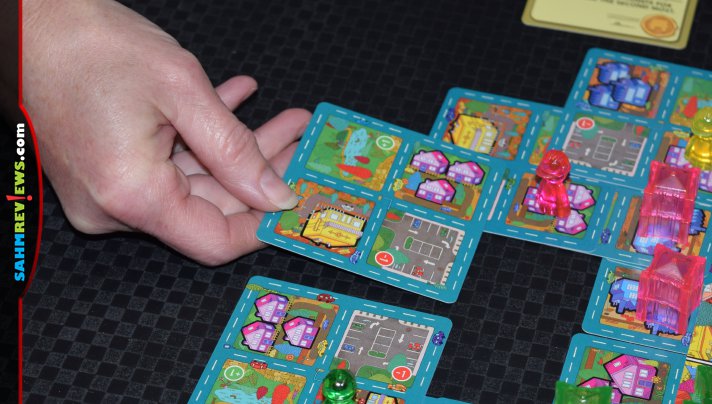 On your turn, if you aren’t happy with your card, you may discard up to three and redraw. Doing so gives you options, but it causes you to take redraw tokens which are negative points at the end of the game. Next, you’ll select a card to add to the city to rezone up to three blocks. If you’re able to connect identical blocks together then you link them into a zone. You must cover at least one block of an existing card, but may cover up to three.

Once you’ve placed your card, you move your City Planner to a residential, commercial or industrial space on the new card. If the card manages to extend your current zone then you skip to the final step and draw a new card. In the event that the card you placed doesn’t allow your zone to continue then it’s time to develop the zone you left. 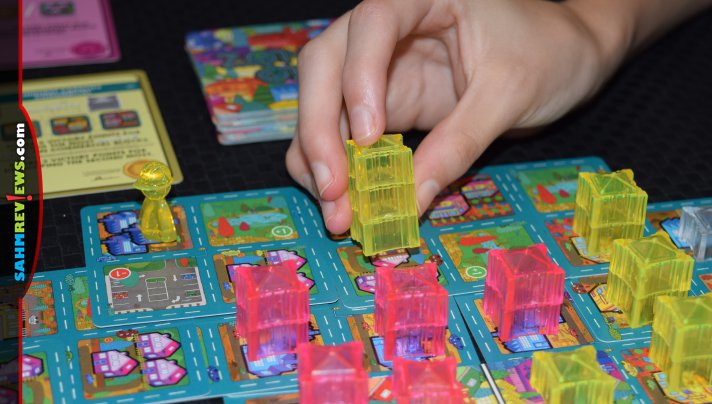 You’ll immediately earn victory points based on the number of blocks you’ve successfully rezoned and developed. The points are on a sliding scale where more spaces earns you more points. Libraries, Stadiums and Train Depots are wild for their type (residential, commercial and industrial, respectively) and increase the size of your area. Rezoning next to parks and museums gives you additional points for your development while contiguous adjacency to parking lots and abandoned buildings offers the opposite effect. Take the associated victory points from the general pool. In addition to placing your building pieces on the spaces you’ve zoned, you’ll also add a piece to the growing skyscraper on the corresponding downtown square. At the end of the game, you’ll earn victory points based on who has the most floors on each skyscraper. 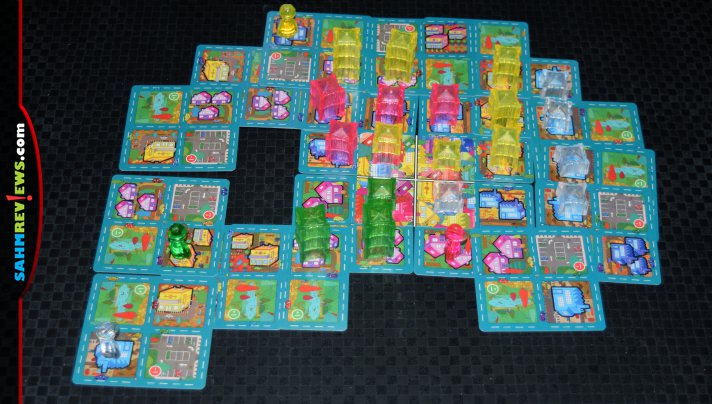 Zoned Out continues until one player has placed their last building or the draw deck runs out. All other players get one final turn then everyone calculates the points earned from the public and secret goal cards. After deducting for redraw tokens and calculated the previously mentioned skyscraper points, everyone counts up their total victory points. The City Planner who did the best job gets bragging rights. If you want to plan a game of Zoned Out into your next game night, pick up a copy on Amazon, direct from Grey Fox Games or at your local game store. Get in the zone with the team at Grey Fox Games by engaging with them on Facebook and Twitter.

Is there a neighborhood park where you live?