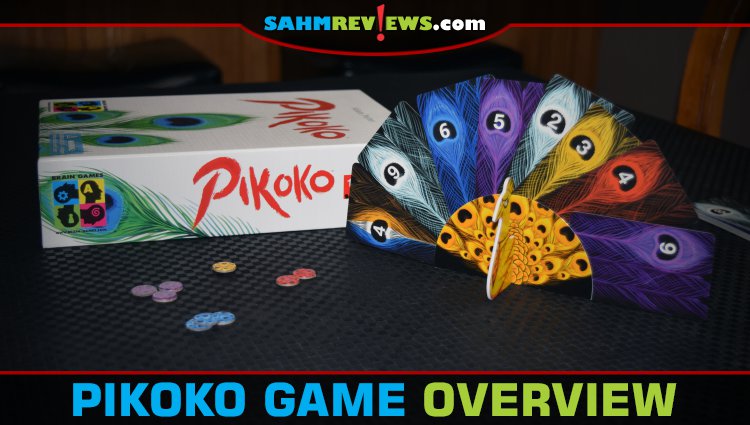 Have you ever walked by a table with people playing a game, only to have it catch your eye? Games that draw others to the table with their presence are some of the most desirable out there. We experienced this phenomenon while playtesting Hues and Cues. Every single time we set up the game in public, a crowd formed to see what we were playing.

At last year’s Geekway to the West convention, the same thing happened when we grabbed a copy of Pikoko by Brain Games Publishing from the play-to-win library. After a couple minutes of assembling and setup, the 3-D nature of the game acted like a lightning rod to other games in the hall. Before we knew it, we had at least 10 people watching our game and asking all kinds of questions about how to play! 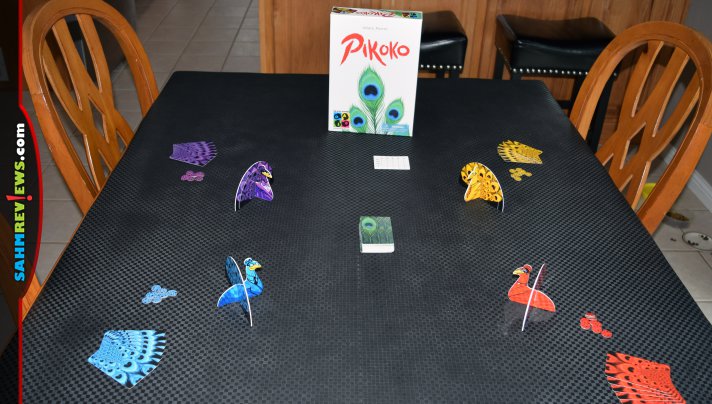 Pikoko is a trick-taking card game that plays very different than ones you are familiar with. The first (and most obvious) thing you’ll notice is the inclusion of custom card holders. These peacock-themed containers remind us of the inexpensive playing card holders you can purchase on Amazon for people who have difficulty holding a full hand of cards. Except, instead of boring blue plastic, these are full-color representations of one of the most colorful birds!

Inside the Pikoko box are these card holders, a deck of 47 feather cards, 30 confidence cards in all five player colors, 45 betting tokens and a start player token. Each player will choose a color and take the matching peacock card holder, confidence cards and betting tokens. The deck of feather cards is shuffled (after removing some cards if playing with less than the full compliment of five) and eight are dealt to each player. The remaining cards are placed in the center of the play area as a draw deck.

Instead of being able to see the eight cards you are dealt, you will place them in your peacock with the backs facing you. You will be able to see your opponents’ hands, but not your own. It sounds a little counter-intuitive, but as you’ll soon see, not knowing what your cards are doesn’t matter all that much. 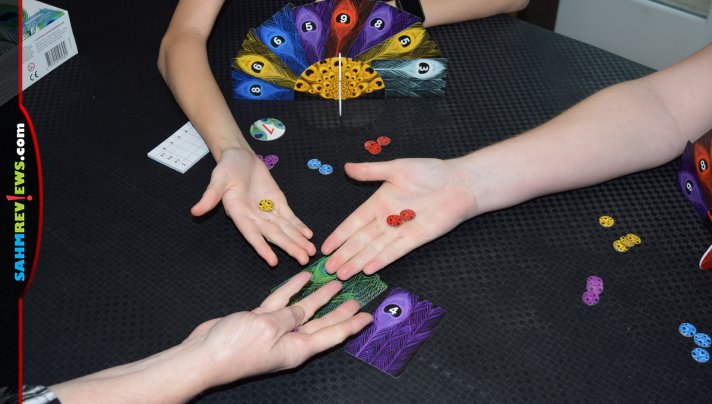 The way you score in Pikoko isn’t by winning tricks like in Hearts or Spades. Instead, you will make a wager on how many tricks each person will win during the round and will score based upon how accurate your predictions are. Beginning with the start player, all other players will secretly put bidding tokens into their hands and reveal them at the same time. The quantity of tokens is your guess as to how many tricks you think that person will win. Using the information you can see about opposing hands, make your best guess! This will continue around the table with each person making a bet about how many tricks will be won by a particular person. After everyone has tokens in front of them, players get one last chance to bet on themselves in the same manner. Note, everyone has eight cards in their hand and there are nine tokens each (one more than the number of tricks). This may play into how much you decide to bet! 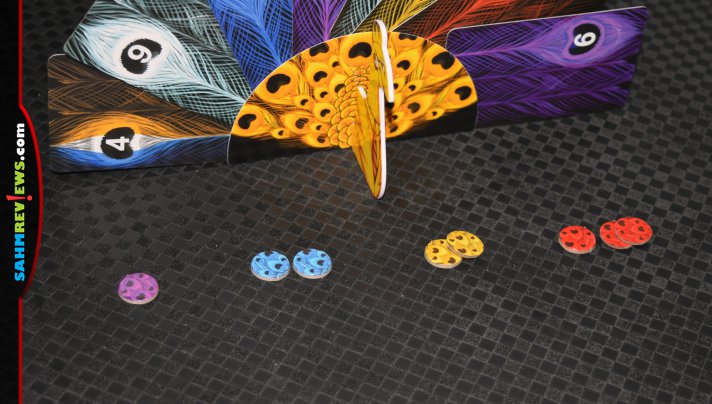 Usually there is at least one bet you’re more confident about, so that’s where the confidence cards come into play. After all bets have been placed, you will choose one card from your hand to press the bet of the one you feel is most likely to pay off. The cards are color-coded by player and you will choose one and lay it face down in front of you. If you cannot decide, you can select the sixth card, which will simply award you one additional point at the end of the round. 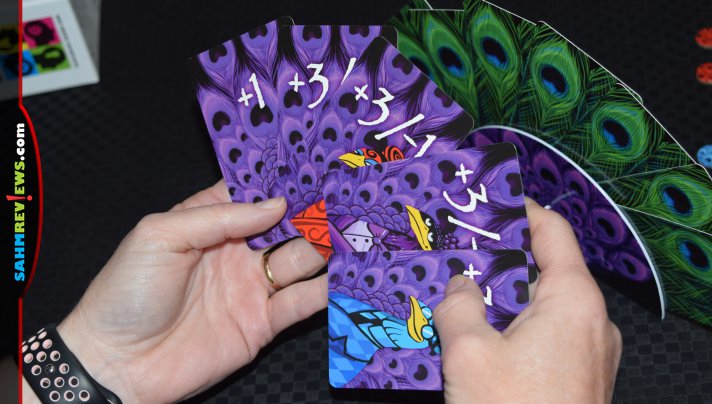 Now the trick begins. Don’t worry about not knowing what your cards are because you won’t be playing them! Each person will be playing a card from the hand of the person on their left! One card is flipped over from the draw deck to dictate the trump suit for the round, then every player takes turn playing one card. Standard trick-taking rules apply – you must follow suit if you can. If you cannot, you may play trump or any other suit. High card of the starting suit wins the trick unless trump is played. Which, in that case, the highest trump suited card wins the trick. Special multi-suited cards can be played when they match a suit, as trump when they match the trump suit or used to begin a trick with the first player choosing which suit it plays as. 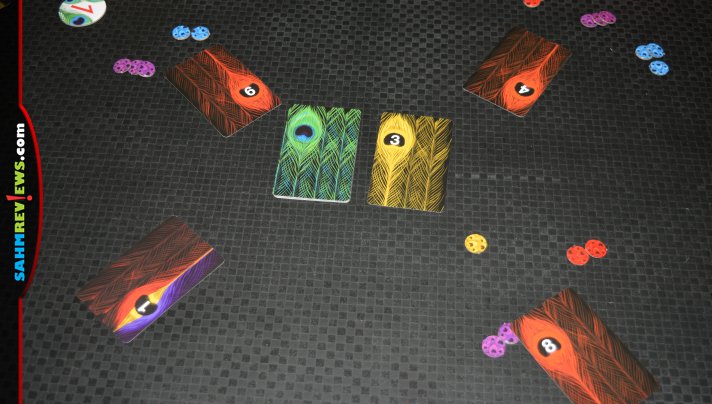 Once all eight tricks have been played and resolved, the number of tricks won by each player is compared to the bets in front of them. Anyone who predicted exactly right is awarded two points. Players who were within one token (higher or lower) gain one point. All others receive no points. Remember, zero is also a bet as it is possible that a player will not win any tricks! 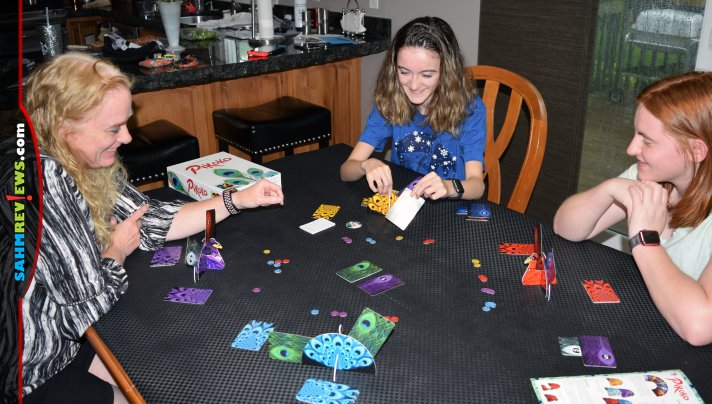 Confidence cards are also revealed at this time. If you guess the number of tricks won exactly by the player with the color on your card, you are awarded an additional three points! However, if you were off on your guess, even by just one token, then you’ll lose a point. After three full rounds (hands) are played, the person with the most total points is the winner of Pikoko!

We found Pikoko to be a VERY interesting twist on the standard trick-taking genre. It took the pressure of winning tricks off the individual players and shifted it to your ability to predict the total outcome of the hand. It may be a little daunting for younger players, so we feel the 10+ age recommendation is right on target. You can find Pikoko at your favorite local game store or via Amazon for under $30. Considering its table presence, it’s a bargain at that price.

You probably know Brain Games Publishing by their smash hit game, ICECOOL (and ICECOOL2). Learn more about their complete line of games by checking out their website and following them on Twitter or Facebook to see what they’re releasing next!

What is the most unique trick-taking game you’ve ever seen?