Looking back over the years of writing about board games, I’ve come to the conclusion that I do tend to favor a type of game without realizing it. It seems that whenever we see a game about trains it makes its way into our shopping cart. It wasn’t obvious to us until I did a search for “trains” on our site and ended up with quite a few results:

And that list doesn’t even include games that aren’t “about” trains, but have them as part of the experience (Rhein River Trade, for example)! We’ve also been known to play an 18XX game on occasion when we can budget 4-6 hours for one session! Now, I’m not going to suggest we’re experts in the field of train-themed games, but I think we’re on the right track (ha!).

As mentioned with 18XX games and a few of the others listed above, train games can sometimes take a very long time to play. That’s fine if you have the flexibility and patience, but there are other times we like to be able to play a full game in under an hour and not feel rushed with our decisions. Through an industry friend, Mr. Chris Leder (also the designer behind Trainmaker), we learned that Calliope Games has revitalized a classic train game originally published by Mayfair Games (R.I.P.) and made it available through a current Kickstarter campaign. 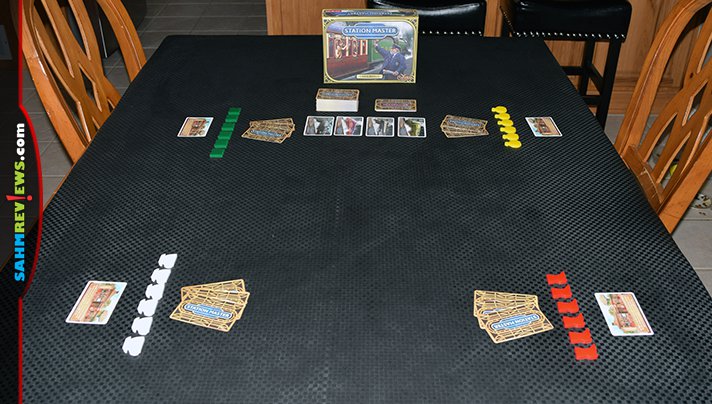 Station Master was originally issued in 2004 and quickly gained popularity due to how easy it was to learn and play, yet each turn was filled with important decisions and strategy. This updated version fixes a couple things with the original game, adds some new features and updates the artwork to today’s standards! We were fortunate to get our hands on a pre-release copy of the new edition and have been playing it all through the holiday break. We rarely feature Kickstarter games, but made an exception this time because we feel you’ll want to be able to grab one of the deluxe copies that may or may not find its way to your local game store. 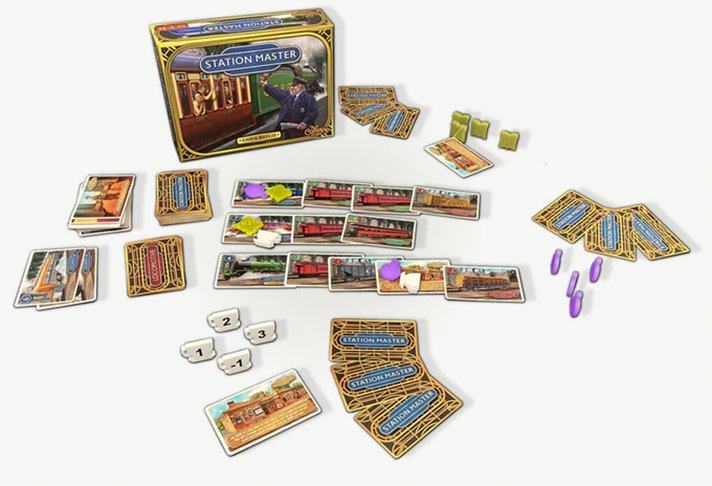 In Station Master, you and up to five other players are vying to load your passengers onto available trains, scoring points for the passenger value and the types of cars connected to that particular locomotive. Setting up the game takes only a couple minutes. First, shuffle the deck of Station Master cards and deal out three to each player. The remaining cards will be placed in the center of the play area to act as a draw pile. Then shuffle the Locomotive cards and deal out a number of them to the table equal to the number of players. These are your trains that you’ll load passengers on and add rail cars to. Give each player a set of passenger pawns, which they will keep in front of them, face-down, so other players cannot see their value. Lastly, all players also receive one Depot card which is kept in front of them and may be played once per game. 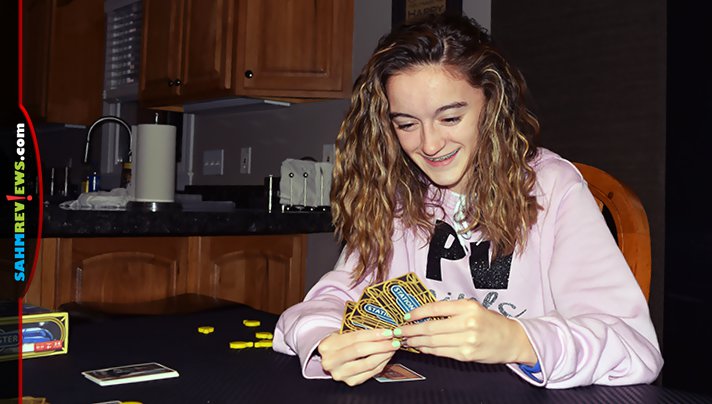 Beginning with the last player to have ridden on a train, players take turns taking one action each. On your turn you choose from two possible actions – either place one of your unloaded passenger pawns to one of the available locomotives or play a card from your hand and draw back up to three. 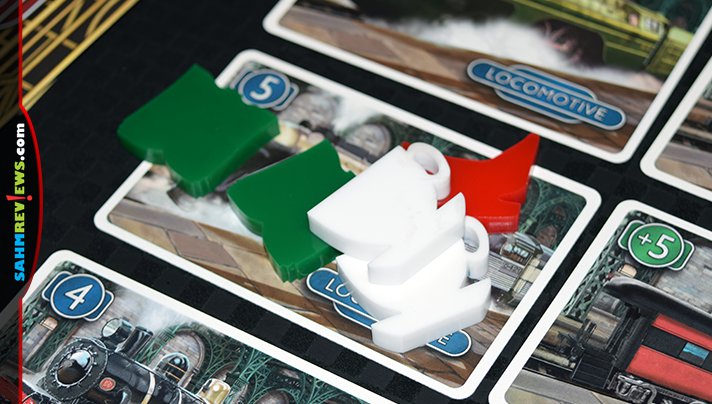 Locomotive cards feature a number in blue in the upper left corner. This denotes two things – how many passengers the train may hold and the number of rail cars the engine may pull. You may place one of your passengers on a locomotive as long as the quota hasn’t already been filled. Same goes for the rail cars – as long as the maximum hasn’t been met, you may add any car to any train. As soon as a train has a number of rail cars equal to the number on the locomotive’s card, it immediately leaves the station and is scored for all players. 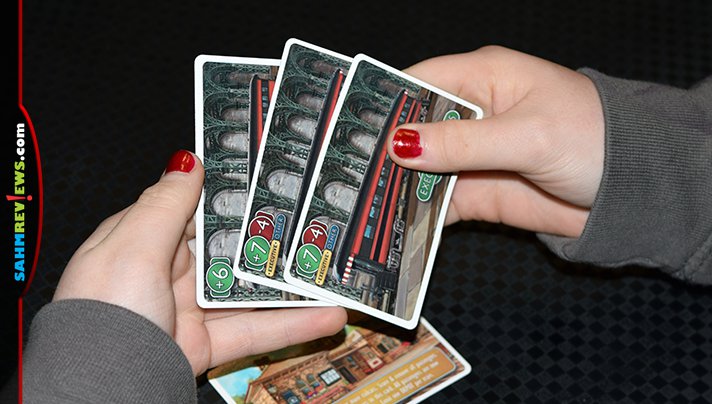 On each rail car is a number listed in green (positive – coaches) or red (negative – freight cars). These are summed up to give a value for that train, which is then multiplied by the numbers on the back of each passenger pawn. Those are referred to as “efficiency points” and each player receives them according to the pawns they played on that particular train. After scoring, the passenger pawns are returned to their owner for use on other trains, while the cards are discarded and a new Locomotive card is revealed in its place.

Adding to the complexity, certain Locomotive cards specialize in certain types of rail cars. An engine marked as “Executive Class” will award the positive points for an “Executive Coach” connected to it (Executive Coaches connected to any other locomotive are negative points). Locomotives classified as “Freight Train” switch things up by reversing the values on any attached rail cars. Freight cars are now positive points and coaches are negative, since no one really wants to travel via freight on their vacation! 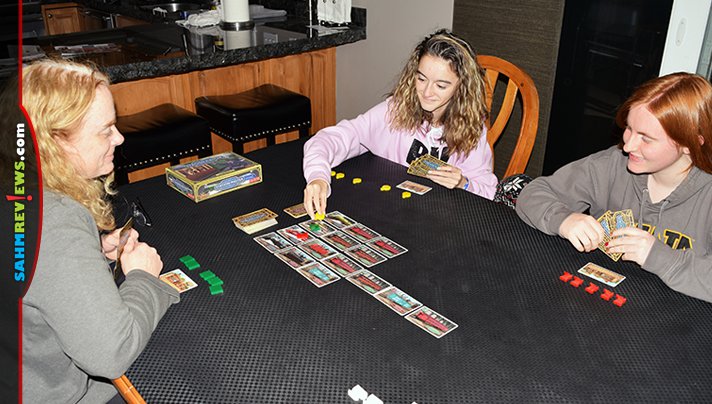 One of your passenger pawns is marked with a “-1”, which is a passenger who received his ticket comped. Placing that person on a train that has a number of freight cars (but a normal locomotive) awards you with positive points since a negative times a negative is a positive! (Did we mention you’ll be doing a little math along the way?!) 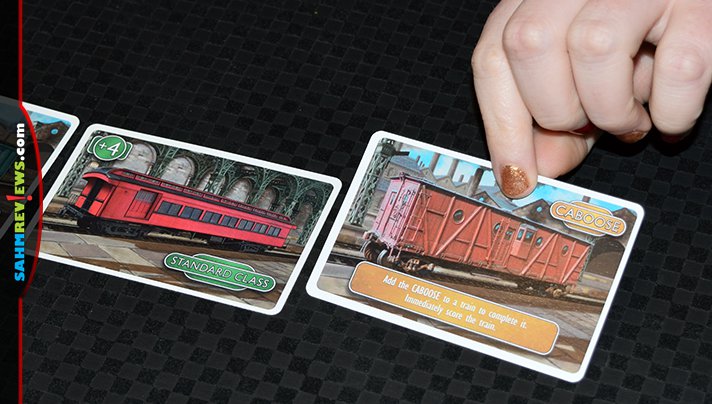 Other cards in your hand that you may play instead of a rail card are actions that are temporary rule-breakers. Some allow you to move passengers between trains, another detaches up to two cars from the end of a train while yet another is the caboose and sends the train on its way (scoring) before the maximum number of cars are attached! 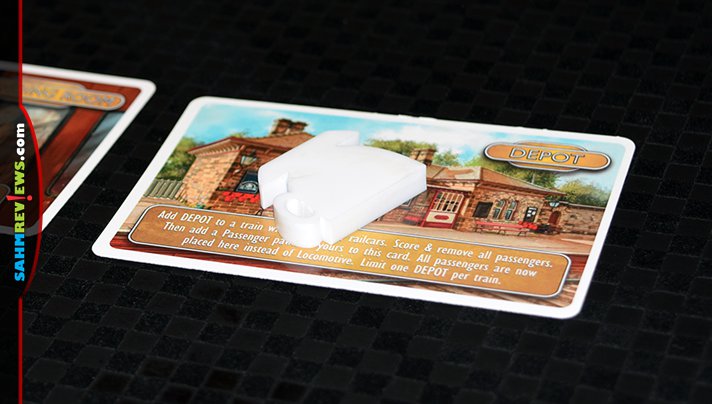 Plus, each player has one Depot cards that may be played instead of one from your hand that forces a train to be scored immediately, but it doesn’t leave the station. Instead, all passengers are removed and the active player then places one of their pawns on the newly-played Depot after scoring. This train’s passengers are now added to the depot card (up to the train’s maximum) and when the train eventually disembarks, those passengers will only receive points for any rail cars added AFTER the Depot! 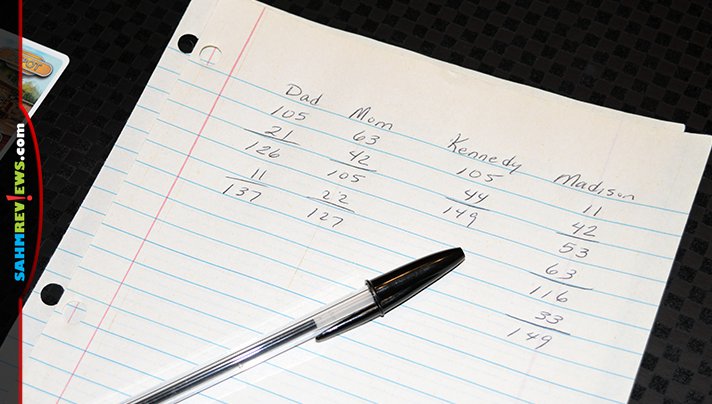 A game of Station Master ends once all Locomotive cards have been revealed, filled and have left the station. Once the final train is scored, the player with the highest number of Efficiency Points is the winner of Station Master! Scoring is kept track of on any piece of paper, but if you’re not wild about introducing 3rd grade math to your gaming session, a handy scoring app will be available for all mobile devices!

The simple concepts (and math) of Station Master make it approachable for players of all levels and is a great example of using games for family bonding. Of course, it would also be of particular interest to train aficionados. You’ll need to act quickly if you want to punch your ticket for this game since there’s only a little over a week left on Calliope Games’ Kickstarter for Station Master. You’ll want to pledge now to be assured a copy of the Executive Class version with exclusive passenger pawns, a deluxe magnetic flip-top box and a luxurious flocked insert. Better yet, take advantage of the campaign to upgrade to a Round Trip where you’ll get both the Standard AND Executive version and receive all twelve different passenger pawn types! We wonder if you can combine them and play up to twelve?!

What is your favorite train-themed game?