Do you have any idea what day (or month) it even is? Me either. We are currently keeping track of our calendar by counting how many days it is past Sunday or how many days until the next. That’s when we get together with a couple of friends and play board games. Don’t laugh. I’m not joking. Even the school days aren’t consistent enough to help figure out what day of the week it is! Anyway, last weekend we played a game that initially reminded me of the 3-D Planet tile game. Pro tip: Aside from the theme, Ecos: First Continent from Alderac Entertainment Group and Planet are nothing alike. One involves tile-laying while the other is an engine-building game! 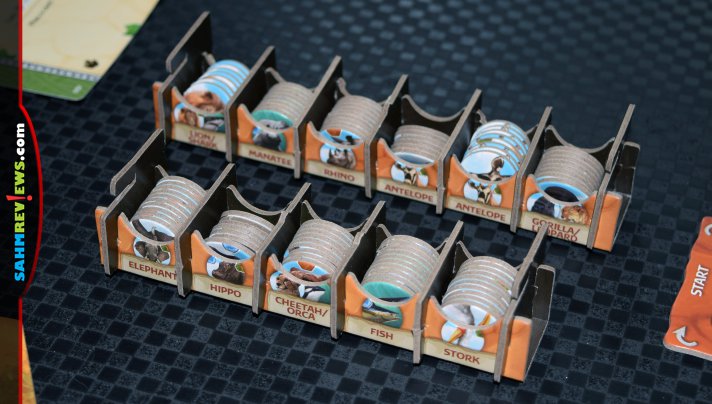 Setting up for a game of Ecos: First Continent is pretty easy once you’ve assembled the boxes to hold the components. You literally just remove the lid to each of the containers and set them alongside the playing area. Place the scoring board on the side and shuffle the two decks of cards. Each player takes the Dial token of their player color along with seven energy cubes. 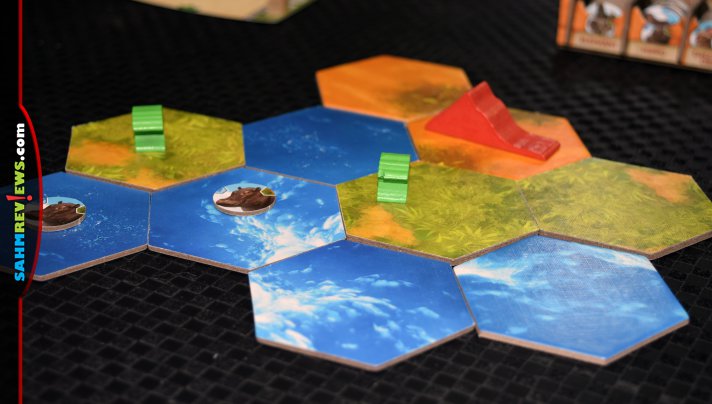 Create a general supply of forest and mountain tokens as well as map tiles. The element tokens are added to the bag and you’re almost ready to go! Leave a lot of room in the center of the table then add two water tiles, one grassland and one desert.to create the beginning of your Ecos: First Continent world. 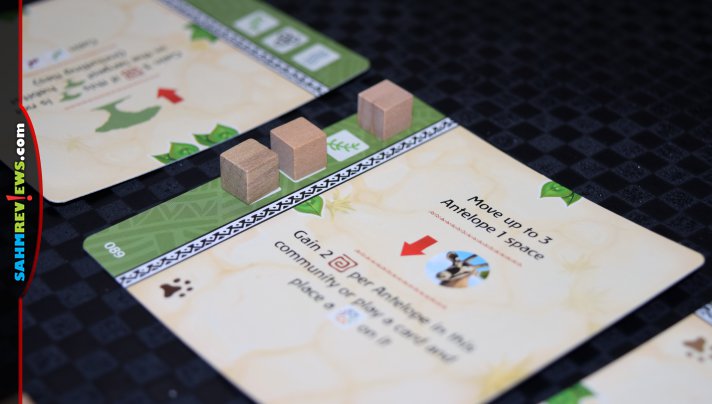 The game revolves around placing energy on designated spots on cards you have in play. To begin the game, you’ll either start with a predetermined hand or you’ll draft. The difference is whether or not you’ve played enough times to be comfortable with the actions, abilities and iconography. 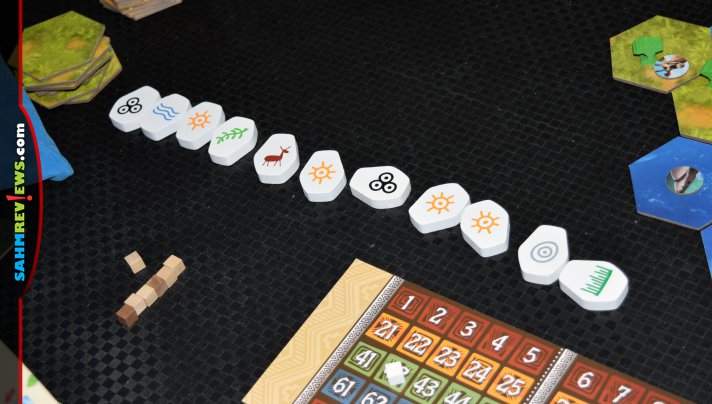 At its heart, Ecos: First Continent is an engine-building game. Players will take turns drawing element tiles from a bag. When a tile is drawn, players simultaneously take one of their energy cubes and place on the designated icon on any of their cards. Once you’ve energized all the spots on a card, you call, “Ecos” and in turn order starting with the player who drew the elements, you resolve the actions and effects listed on the card. 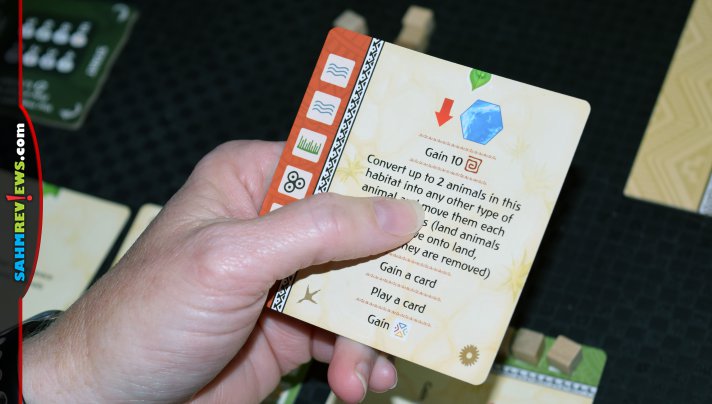 Some of the actions are simple and allow you to place a landscape tile, animal, tree or mountain. In many cases, you can gain additional elements to place on other cards. This is where it pays to build an engine with your allotment of cards. Once you’ve completed it, you rotate it clockwise for as many sides as there are leaves displayed. Once you’ve rotated it beyond the last leaf, it is removed from the game. The more powerful a card, the more energy cubes are required in order to activate it. In addition, those same cards often have few opportunities to be used before they are exhausted and out of the game. 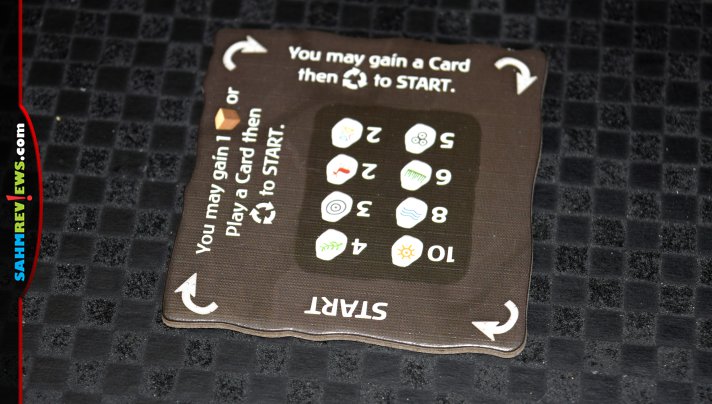 But sometimes you don’t have the element icon that was drawn, enough energy to place a cube or even may lack cards at all. When any element is drawn, you may opt to place the cube as mentioned above or simply forgo that and rotate your Dial instead. After rotating a couple of times, you’ll have the option to add new cards for your hand, gain an energy cube or play a new card from your hand. Once you’ve taken one of these actions, you rotate your Dial back to the start position. 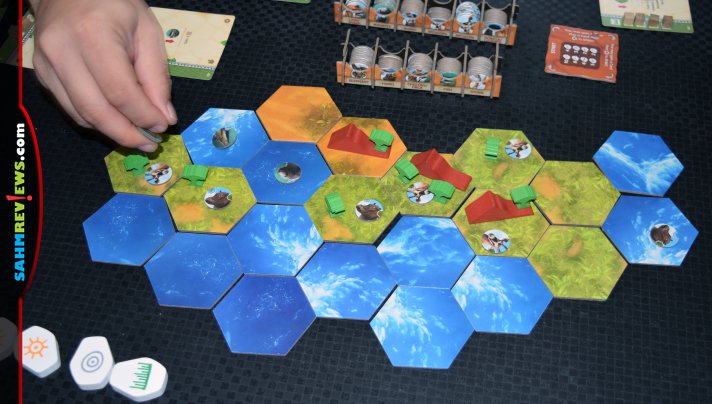 What makes Ecos: First Continent interesting isn’t just the engine-building aspect of the game. In addition to being able to lay tiles, trees, mountains and animals, there are also a lot of other ways to engage and earn points from these various components. As an example, there are limits to the number and locations for items to be placed. You can’t put a shark in the grasslands, nor can a mountain grow in the ocean. Some of the cards refer to communities or habitats as ways to earn points. Communities are a contiguous group of animals adjacent to each other on the continent. Habitats refer to groupings of mountains or trees. There are opportunities to earn points by adding these things to the ecosystem and additional ways to gain victory points by taking them away. I was racking up points putting hippos in the ocean, only to discover that a competitor’s shark cleaned house. Someone else kept earning points by moving animals across the desert. These constant changes to the board means that even if someone has a good engine going, you can thwart it by removing some of the items they would earn points from.

The player with the element bag continues to remove tiles one at a time until a wild is drawn. All players have the opportunity to select an icon of their choice to energize and if it completes their card, they proceed as they normally would when they exclaim, “Ecos.” After that has been resolved, all the elements are returned to the bag, it is passed to the next player and the process proceeds in the same manner. As the continent grows and flourishes, you’ll find more cards that work together to earn victory points. A game of Ecos: First Continent ends when a player has at least 80 or more points when a player draws their wild element from the bag.

The game play of Ecos: First Continent was easy to grasp which makes it great for a family game night. At the same time, there are options to switch it up and make it more strategic, allowing it to fit well with players who like more complex games. If you’re ready to build your own world, pick up a copy of Ecos: First Continent at your local game store, online from Amazon or direct from Alderac Entertainment Group. Visit their website or social channels (Facebook, Twitter) to check out the many other creations in the AEG line of products.

If you could design a new ecosystem, what’s the first type of wildlife you would create?