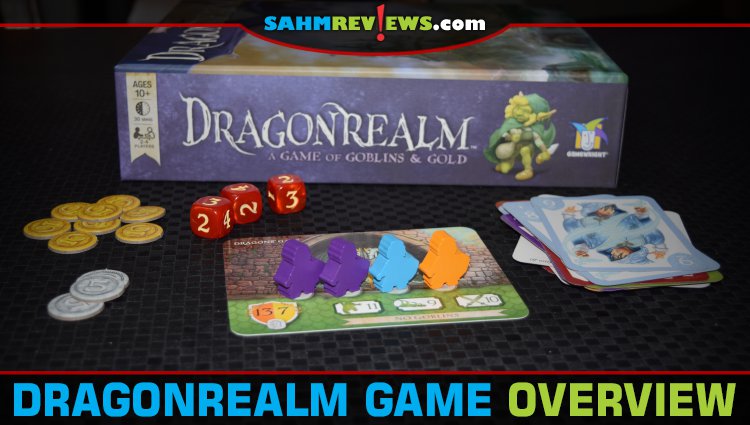 Last Thursday we featured what’s become an essential hobby game for younger players, Dragonwood. During the article, I mentioned how Gamewright has turned that card game into a series with the recent issue of Dragonrealm, the second game in the dragon-filled world. If you’re a fan of the first one, keep reading as I think you’ll want to add this one to your collection as well. 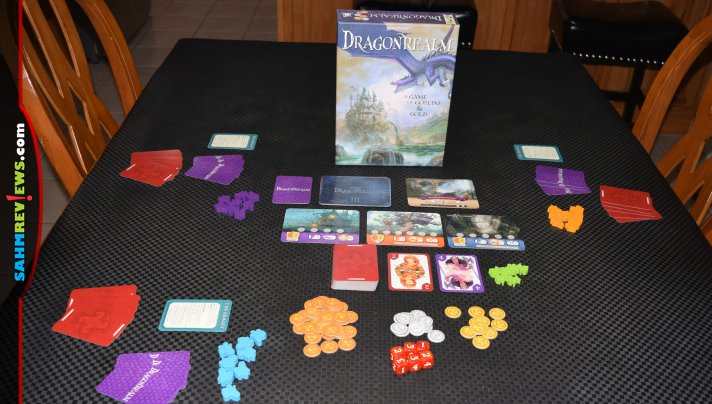 Once you play Dragonrealm, it will become very obvious how it was born as Dragonwood and grew into a slightly more complex strategy game. The main deck of Adventurer cards is the same (five suits, numbers one through twelve) and each player begins the game with five in their hand and the rest in a draw deck. Instead of Dragonwood cards featuring creatures, enhancements and events, Dragonrealm utilizes Location cards in which you will be vying for majority. These twenty cards are sorted into four face-down piles by color and shuffled. A location deck is created by starting with one face-down green dragon card and alternating cards from the other stacks, I, II & III, until you have seven total. The first three are revealed and laid in a row next to the rest of the location deck. A double-sided Adventurer’s Academy/Alley location card is also placed in the middle of the play area. 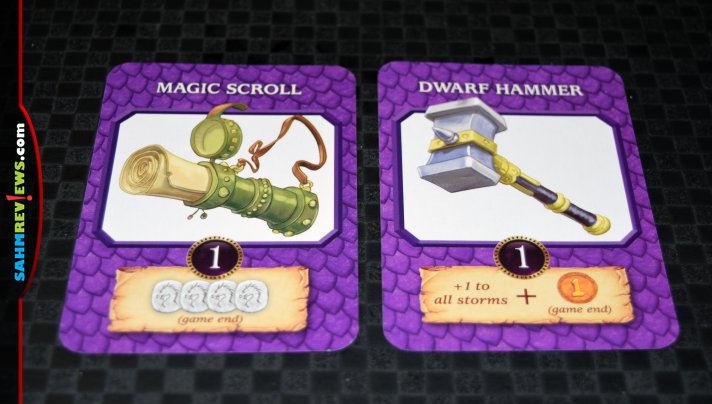 In additional to their starting Adventurer cards, each player is dealt three Enhancement cards. They will look at them and choose one or two totaling level points (two level 1’s or one level 2) and discard the rest. These are kept secret from other players and may be used during any turn as long as you declare their use beforehand. Everyone also collects the eight meeples in the player color of their choice, with the goblin meeples kept in a pile where everyone can reach. Same goes for the treasure coins and custom dice. 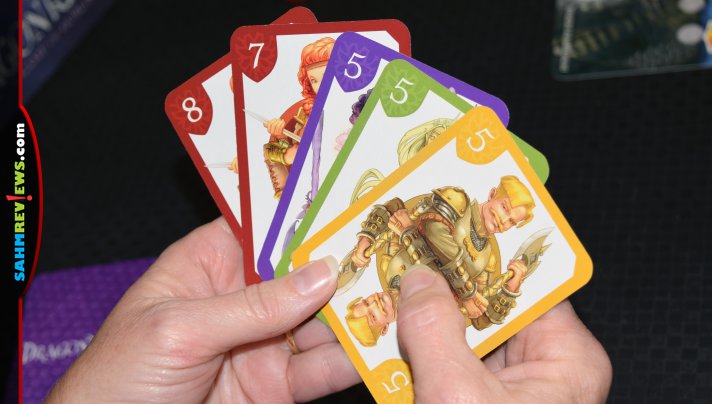 Playing Dragonrealm is very similar to Dragonwood also. On your turn you can rest and draw two Adventurer cards from the open tableau or from the top of the deck. No Lucky Ladybug cards in this game! If you draw a Goblin card, place a goblin meeple on the location listed on the card (right, left or middle). A Rockslide event forces all players to pass cards to other players, mixing up their hands unpredictably. 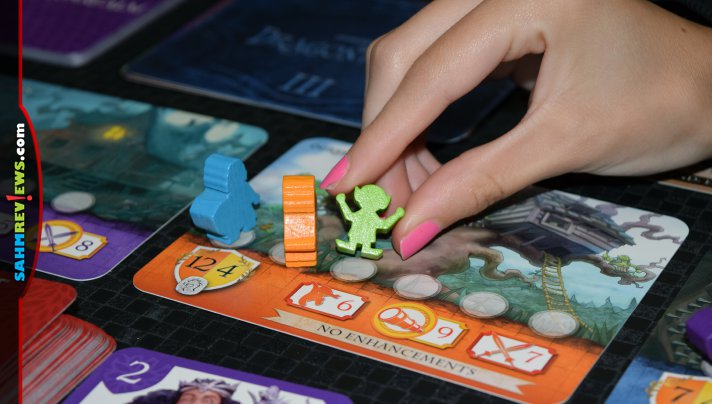 If you’re not resting, you’re exploring. This is where you’ll adventure to one of the locations and try to place your meeple upon it. In order to do so, you must play cards exactly as in Dragonwood. To Storm, you will play cards of the same color. To Search, play cards of the same number. To Sneak, play cards in numerical sequence. Each of these will earn dice equal to the number of cards you played. Then, roll the dice to try to meet or beat the number listed next to the explore type you chose. 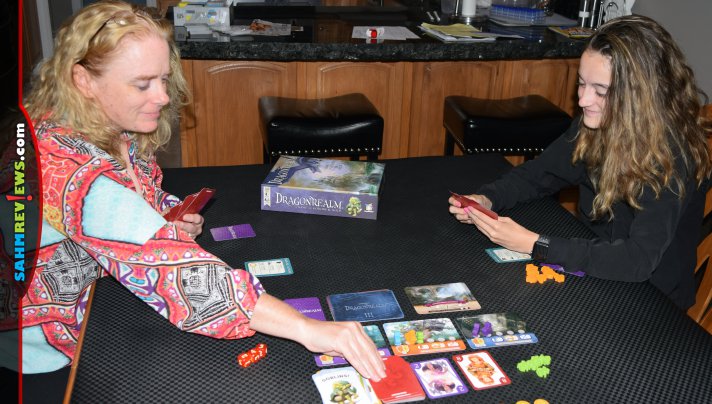 If you succeed, place one of your meeples on one of the four spots on the location card. If the explore action you defeated had a gold circle around it, place two meeples (the gold circle is reserved for the more difficult challenges on location cards). Discard the cards you used and draw one new one from the deck to add to your hand. 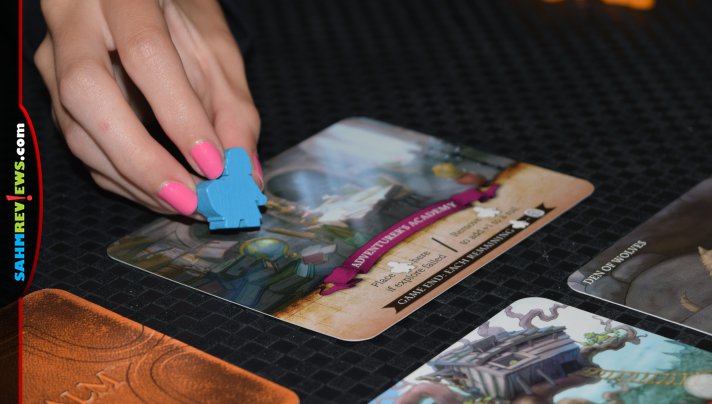 If your roll fails to meet the required total, take all the cards back into your hand and place a meeple on the Adventurer’s location card. You may spend them on a future Explore in order to add +1 to your roll and may use as many as you have on the card. Or, you may elect to leave up to three of them on the card for an end-game bonus. 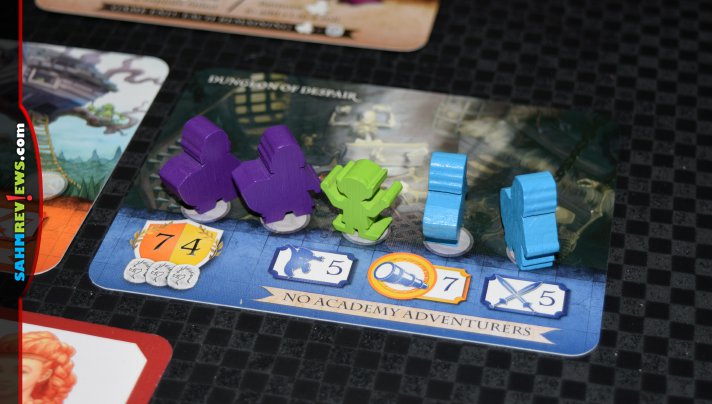 Once a location card is filled with meeples and/or goblins, it is considered complete and is scored. The player with the most adventurers on the card receives treasure coins matching the value on the left side of the shield in the lower left corner. Second place receives coins equal to the value on the right side. If only one player is on a location, they get both values! Goblins are also considered a player for this purpose, and if they were to win any coins, they are simply lost. Coins should also be kept face-down until the end of the game. The winner of the location also gets to keep the card, face-down.

A game of Dragonrealm ends when the Dragon location is completed (the last card in the deck, although it doesn’t have to be completed last). At that point the game ends immediately after the Dragon card is scored and any remaining locations are scored as if they were complete. Players then add up their Dragonstones from their collected locations, the Adventurer’s Academy/Alley and enhancement cards (symbols under the shield). The person with the most gets a bonus of five treasure coins. If tied, all tied players get three each. The adventurer with the most coins overall wins Dragonrealm!

If you’ve already enjoyed Dragonwood and are looking to take your gaming to the next level, or just want a solid title to introduce your younger players to some of the more modern board game mechanics, Dragonrealm is a very good solution. You can find copies available for sale at your favorite local game store, direct from Gamewright on their website or on Amazon with Prime delivery. Do you think they should continue with this line by making new games which are slightly more difficult each time? Tell them on Facebook or Twitter!

What is your favorite modern game to play with your family?