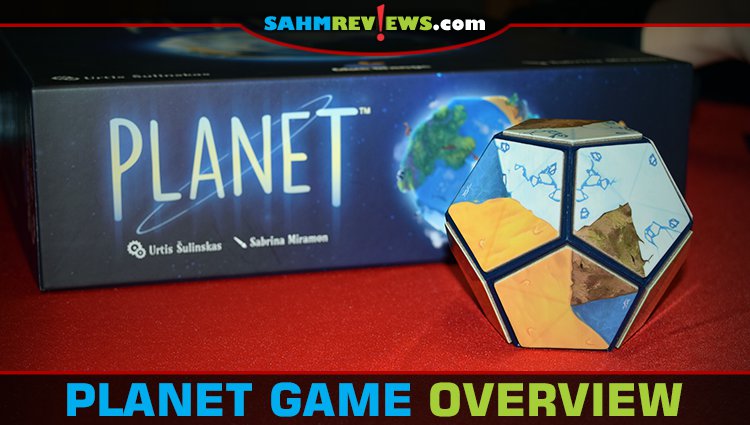 What does today mean to you? Is it all about recovering from the Easter food coma? Are you wishing your holiday weekend was a *little* bit longer? Are you counting the final days until the release of the most anticipated movie of the year? Perhaps you’re taking in the fresh air and appreciating that today is Earth Day.

In honor of this environmental awareness day, it seems fitting that we should tell you to plant a garden, save money on energy bills and play Planet, an earthly game from Blue Orange Games. For 2-4 people ages 8 and up, Planet is about strategically placing continents to create natural habitats. What’s unique about this tile game is that it doesn’t take place on a board, but rather on 3-dimensional blank cores. You’ll be creating your own planet and so will all your opponents! 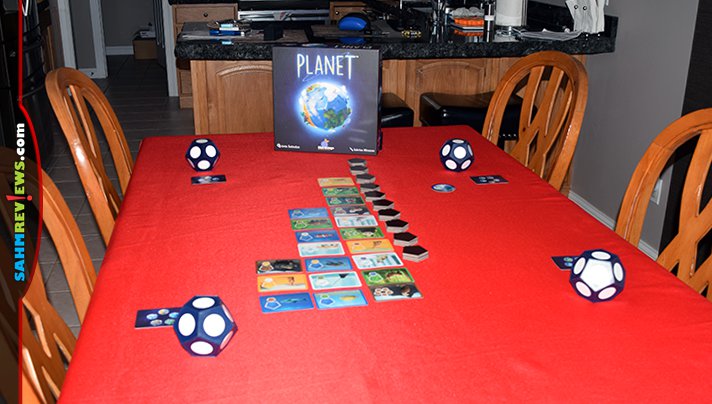 It doesn’t take six days and nights to set up Planet and have it ready to create these new worlds. Everyone takes one of the empty Planet cores. They’re made of metal plates and over the course of 12 rounds you’ll be adhering Continent tiles to them. Shuffle all the Continent tiles and place them face down in a line of 10 5-tile stacks within reach of all players. Shuffle all the Animal Cards then randomly draw 20 to be used during this game. Utilizing the sample grid in the instruction book, randomly place ten of them face up to create a row below the stacks of Continent tiles followed by a second row containing 7 cards and a third with 3 final cards. Everyone receives one “Natural Habitat” objective card for end game scoring. Make note of your secret objective then place the card face down in front of you. Finally, select a player and start creating! 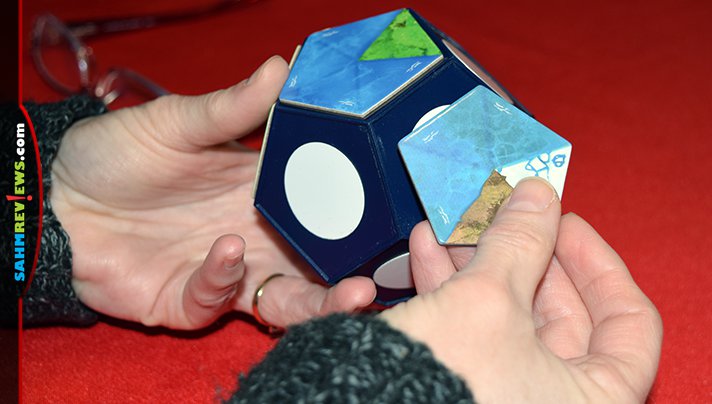 For the first two rounds, each turn only involves Adding Continents. Beginning with the third round, turns consist of two parts: (1) Adding Continents and (2) The Origin of Life. The first player grabs the first stack of Continent tiles and places them face up for everyone to see. 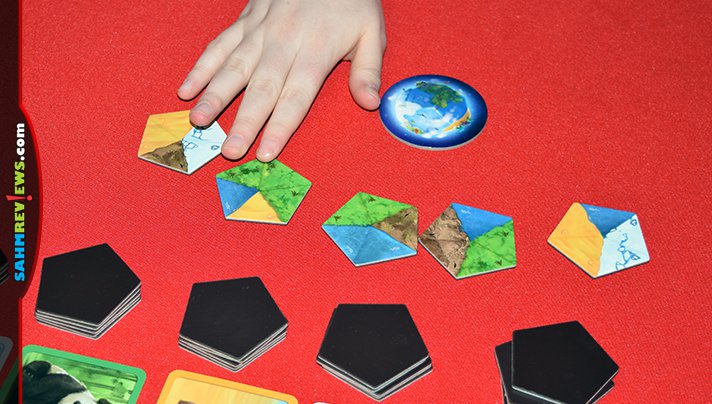 Then the first player selects one of these tiles and adds it to their Planet’s core. Moving clockwise, all other players select from the remaining available Continent tiles. After everyone has selected their tile, the remaining one(s) are placed face down next to the 10th stack to begin an 11th stack. Once it has 5 in it, a 12th pile will be created. Additional leftovers beyond that are returned to the box. These 12 piles are the round trackers. When they are depleted, the game is over. 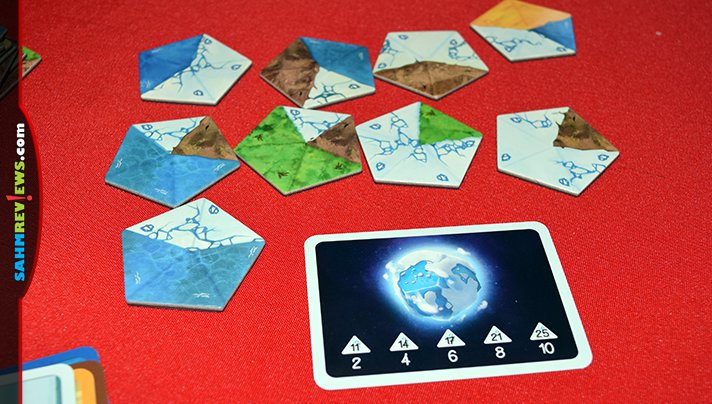 As you place your continents on your core, you’ll want to keep in mind your Natural Habitat objectives. Each Continent tile depicts a variety of five different environments: Mountain ranges, deserts, forests, oceans and glaciers. You’ll see a myriad of triangles referred to as Areas. A single isolated Area or a collection of connected Areas is considered a Region. You’ll earn points based on the Areas present on your Planet. The more you have, the greater the points you’ll receive at the end of the game. 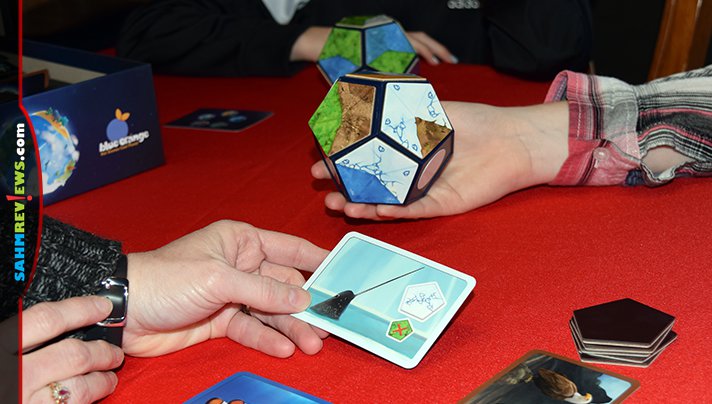 However, you’ll also score based on the 20 Animal cards that were placed on the grid during setup. Starting in the third round, we start to see signs of life emerging. Players are hoping their Planet will be the one with the best conditions present to host the creatures depicted on the various Animal cards. There are three types that will be evaluated as part of the Origin of Life phase of the round. One type rewards the player with the most of one kind of Region. All players count the number of Regions depicted on the card. The player whose Planet has the most of that type of region wins the card and the right to host that animal. A second type of Animal card seeks the biggest Region of one kind that touches a different specific type. In these situations, you’ll count the number of Areas of the designated type to find the one that creates the biggest Region that is touching the secondary specified habitat. If you have the largest Region that meets the criteria, you’ll claim the card and host the animal depicted. The third type of Animal card seeks the biggest Region which is NOT connected to the specified Habitat. This is similar to the prior example except it cannot have any part touching the secondary type. 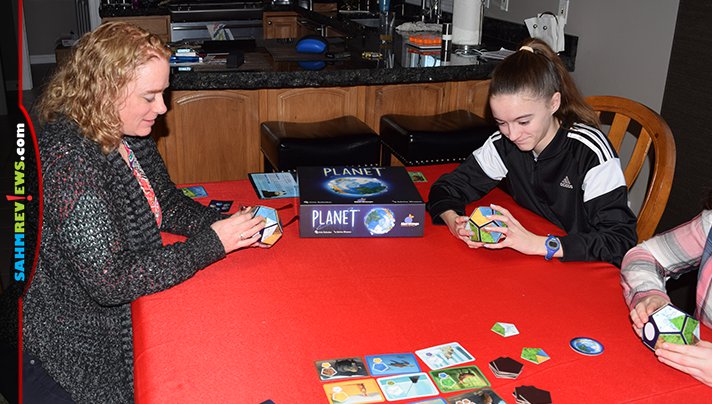 You’ll spend 12 rounds creating your Planet and collecting Animal cards when you have best met the criteria. After the 12th turn, you’ll see that your Planet is fully covered and end of game scoring begins. Everyone reveals their private objective and earns points based on how well they were able to achieve it. Then, players earn one point per Animal card whose Natural Habitat is the same as their private objective card. For each Animal card that is different than your objective card earns two points. The player with the most points wins.

With less than half of the Animal cards being utilized each game, there’s variety from one time to the next. There’s also a variation where half of the Animal cards are placed face down, giving a greater randomness to who earns the card. From a game perspective, the 3-dimensional playing fields provide an interesting twist on a traditional tile-laying game. You have to continuously check to see how your choices might impact something on the other side of your globe. I think that’s one of the reasons Planet earned a Mensa Select distinction. Additionally, the concept behind Planet opens doors to conversations about the environment and how we’re able to provide the right habitats for the animals that reside on Earth with us. The only thing the game lacks is flavor text on the cards or additional documentation that tells more about the various animals depicted throughout the game. However that’s not relevant to the game itself and simply would allow it to be utilized more in educational settings. Available just in time for Earth Day, you can run to your local game store to see this unique game in person. If you’re already sold on this environmental wonder, you can order a copy from Amazon and have it in a couple days! Stay on top of the latest news by visiting Blue Orange Games in their natural habitats: their website, Facebook and Twitter.

Which animal would you want to be the first to inhabit your planet?