A couple of years ago, we put together a list of Christmas-themed games. The inspiration for the article was that we received great responses to our articles about Marvel-themed board games, games about art, bunny-themed board games, board games for St. Patrick’s Day and cat-themed games that had posted in the prior months. While we certainly create these lists to help you find games for the theme du jour, it’s also an opportunity for us to learn about games and publishers we might not have been familiar with. That’s the case with one of the games on that list: Christmas Lights. Not only weren’t we familiar with the game, but we also had little knowledge of the publisher, 25th Century Games. Roll the calendar forward a couple of years and here we are… introducing you to that very publisher and a few games to show their diversity.

The minute I started reading the rules to Christmas Lights, I immediately thought of Hanabi. The game play is nothing alike, but the concept of playing a card game where you cannot see your cards is somewhat of an anomaly. It’s a competitive memory game for 2-6 players, but plays fairly quickly. The only objective is to put together two strings of lights that match your objective card.

Give each player a character card then shuffle the event cards and place them face-down to form an event deck. Deal two random Pattern cards face-down to each player. Shuffle the deck of bulb cards then deal five to each player, reminding everyone to fan them out facing away. Like with Hanabi, you’re never allowed to look at your own cards. 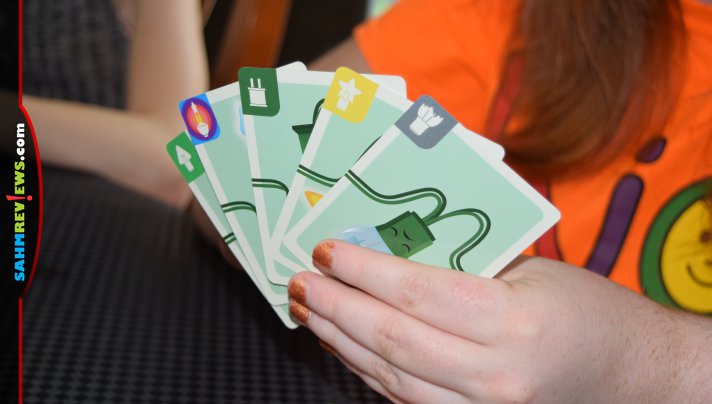 There are four actions: Play, Swap, Sale and Refill. On your turn, you must do them in that order, but may skip over one if you don’t want to implement it. When you opt to play, you’ll choose one or two cards from your hand and place them into your string. Each must match the next bulb on your pattern card or it must be discarded. The next available option is to swap a card from your hand with one from another player’s. A sale is an opportunity to gain information about your hand. Choose one or two cards and place them face-up on the table. You can offer each to any player in exchange for the answer to a yes-or-no question. The player who accepts the offer takes the card as they provide a truthful answer. Finally, refill your hand back to five. 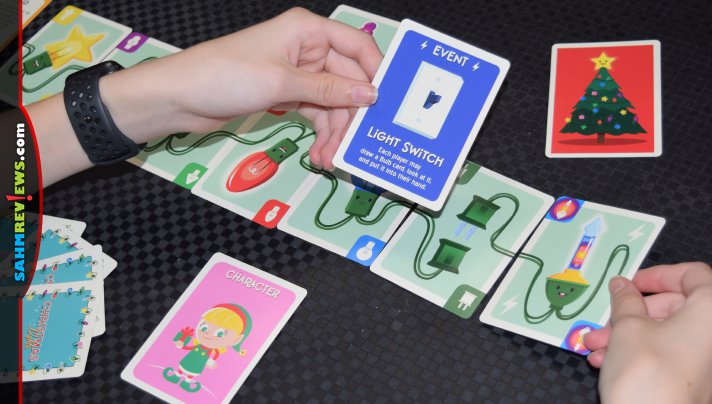 There are wild “bubble bulbs” in the deck that act as wild cards. You can add these to your string to easily complete a bulb, but it comes at a cost. Each time you do it, you must draw an event card. Event cards generally offer your opponents some kind of benefit such as looking at one of their cards or drawing a new one from the deck. When someone completes their first string of lights, they reveal their pattern card to the rest of the players to confirm it’s accurate. In order to continue on to their next pattern card, they must find a plug because the second string won’t work if it doesn’t have electricity! The game ends when one player completes both their pattern cards. The simple concept of pattern-building makes this game approachable for younger kids as long as they remember that they aren’t allowed to look at their own cards! Copies of Christmas Lights can be found on Amazon or direct from the publisher.

Cloud Control (not to be confused with Cloud City, the city-building game from Blue Orange Games) falls into the category of a party game as it can support up to ten players. Players take turns using cards to form clouds in hopes of getting other players to guess what they’re trying to illustrate. 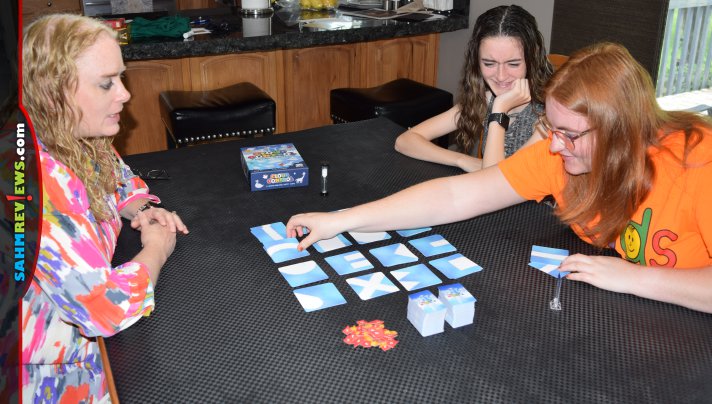 Setup is extremely simple. Create a stack for each individual cloud type and place them in the center of the table within reach of all players. Shuffle the deck of shape cards and set it and the points tokens alongside the grid of clouds. 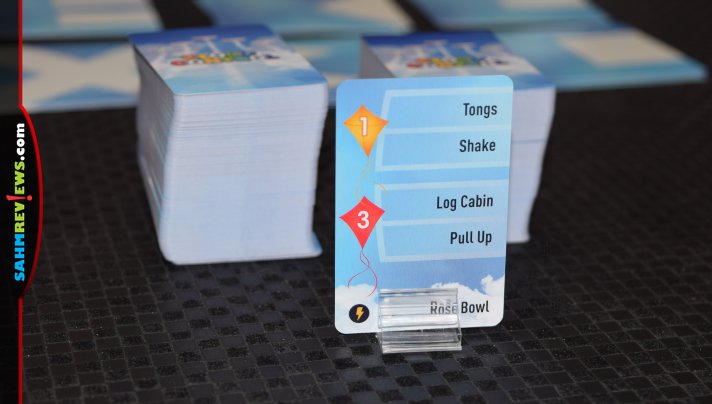 On your turn, draw a card from the shape deck. Study it carefully to get ideas on how you’ll convey your ideas using only the cloud tiles available. When you’re ready, flip the timer and go. 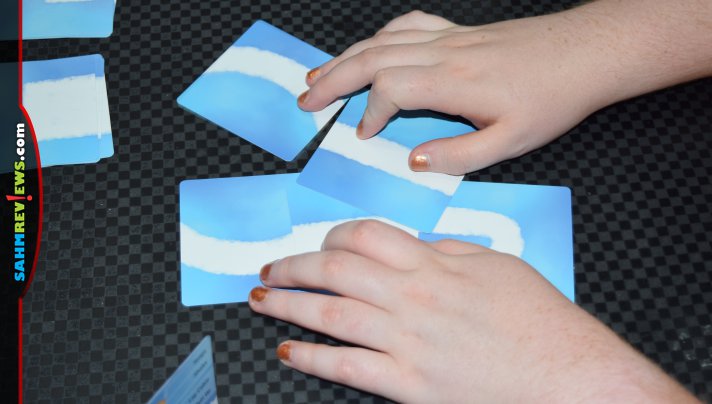 You’ll attempt to get the other players to guess as many of the four shapes on the card (one at a time). You can overlap cards and even move them around to animate the image. The only things you cannot do involve hints that don’t involve the cards. In other words, don’t speak, use sign language or create letters. When the timer  runs out, you and the people who guessed correctly first each receive points as noted on the card. If more than one person ties with their answer, each will receive a point. While light like Christmas Lights, Cloud Control is a very different style of play.  It reminds me of a cross between Doodle Dice, Stringamajig and Pantone: The Game. Add a copy of Cloud Control to your Amazon cart or order direct from the publisher.

Okay. Before I say anything about Jurassic Parts, I need to confess that I was duped by the small box. While the rules are simple, it’s certainly more strategic than I anticipated. I mean, we’re just digging up fossils. But it’s all about area control where the player with the most chisels earns the right to the lion’s share of the claim. 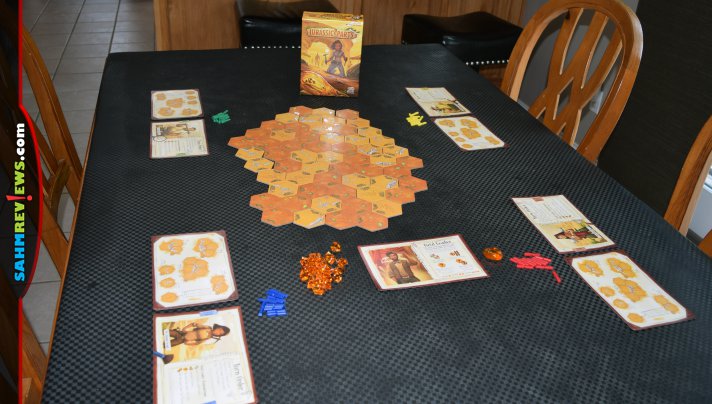 Each player takes a reference sheet, a paleontologist mat and the chisels of that color. Using the instructions, you’ll create a dig site in the center of the table with a mixture of dirt and fossils revealed on tiles. Place the Field Leader board alongside the dig site. Determine a starting player then assign supplies based on the turn order. 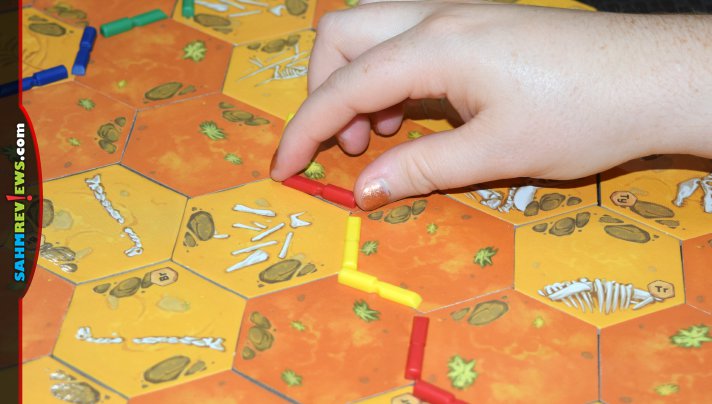 On your turn, you’ll sharpen three of your chisels by moving them from the right side of your mat (where they all start) to the left. This indicates that they are available to use to break apart the slab. You’ll place one chisel between two unobstructed tiles or use up to two additional chisels to break apart rocks that are hindering the dig. 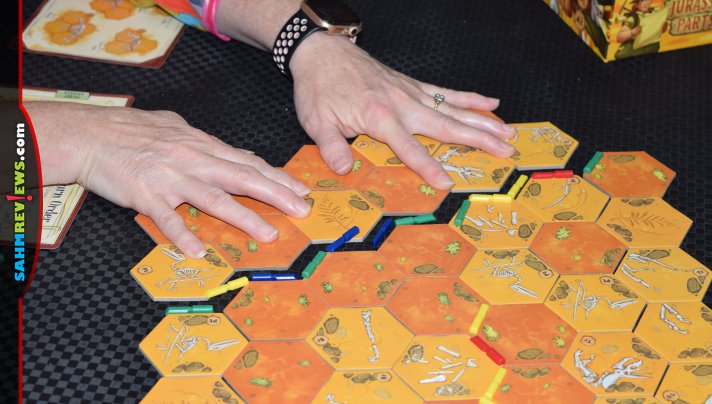 As soon as a section has been completely broken away, the player who placed the last one stops and immediately resolves the section. The player who had the most chisels contribute to the breakaway earns the right to take half of the available tiles (maximum six). The next highest chisel total takes half of the remaining. This process continues until all chisels or all fossil tiles in that section have been addressed. In the event that you contributed to the break but didn’t earn any fossils, your chisels are returned to you as sharpened to be used on your next dig. 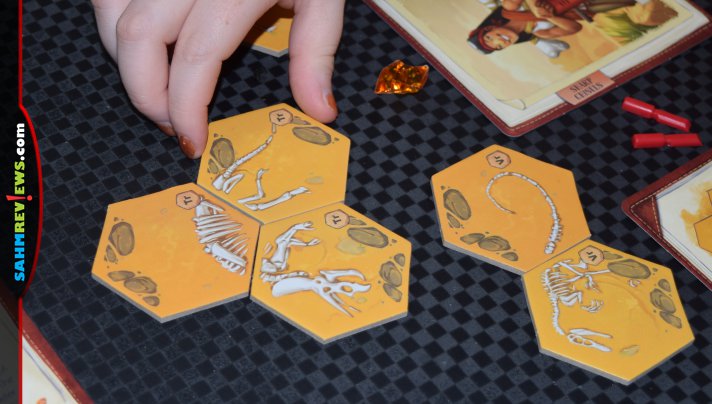 Whenever you complete a fossil, you earn a piece of amber. As part of your turn, you may spend amber with the Field Leader to ignore troublesome rocks, sharpen additional chisels or even claim a fossil tile from the slab or field leader. You may also sell one tile for one amber, but may only do this once per turn. This is a great way to create value from fossil fragments that you won’t be able to complete. The game is over when all tiles have been claimed from the slab. Players calculate their points based on plants, amber and completed fossils to determine the best paleontologist. Jurassic Parts is an area control game that’s quick to play due to the ever-shrinking board. Dig up your own copy on Amazon or check it out on 25th Century Games’ website.

These games are just a sampling of what 25th Century Games has to offer. Stay tuned right here in coming weeks for more from their product line. Of course, Twitter and Facebook are always a great place for gathering information about upcoming releases and promotions!

Which of these games would you enjoy the most?