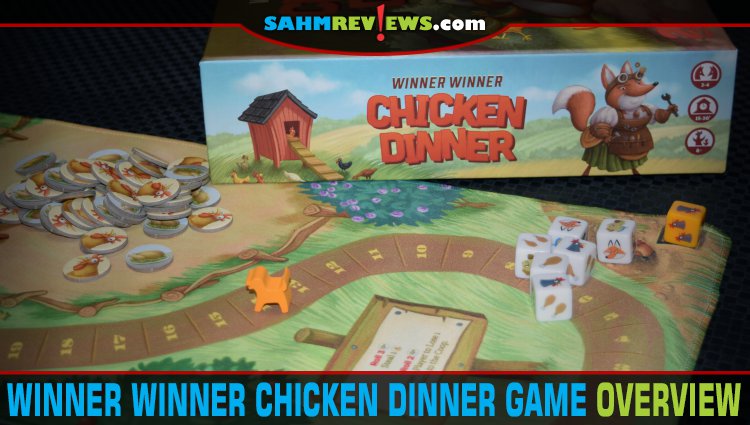 This past July we first told you about 25th Century Games and several current games they offer. Christmas Lights had previously been included in our roundup about Christmas-themed games and had been in our top ten best sellers for 2019, even outperforming Codenames!

Place the farm mat in the center of the play area and set the action card mat next to it. Shuffle the deck of action cards and flip over three – one for each slot on the mat. The rest are set next to the mat as a draw deck. The dog meeple is put on the main neoprene mat on the dog head icon at the start of the track. Count out fifteen chicken tokens per player (Winner Winner Chicken Dinner supports 2-4 players) and put them in the coop area on the farm. The bonus yellow die is also placed in its designated area on the mat and each player takes one bag, one character card, which gives you unique abilities, and two chicken tokens. The tokens are put inside the player’s bag to start the game.

On a turn you will roll all six white dice and reroll any non-dog results if you wish, up to a total of three rolls. Once you are happy with the results, you will resolve the dice in any order you wish. However, you must use up all of an icon before moving to another. Once a die is spent, it cannot be used again.

There are four possible results from the dice, sometimes in multiple quantities. For the dog icon, move the dog meeple along the bark track the same number of spaces as dogs rolled. You may then resolve the dog’s ability. Rolling two dogs lets you choose another player to lose a chicken token from their bag back to the coop.

If you roll three dogs, you may steal a chicken from any player’s bag and put it into your bag. You may also do multiple dog actions if you have enough to spend. For instance, if you have four dogs rolled, you may do the three-dog action once or the two-dog action twice!

If you rolled any chickens, add up the total number and take that many tokens from the coop and stash them in your bag. Some dice faces have two chickens, which count as two tokens. If there are no more chickens (or not enough) remaining in the coop, take as many as you can, and the game will end at the end of your turn.

Fox die results allow you to purchase action cards from the organizer, paying one, two or three as dictated on the board. At the end of your turn, slide all cards to the left and refill as necessary from the draw deck. If the card you purchased says “Play Immediately”, you must resolve the card’s effect before taking any other actions. Otherwise, collect the card into your hand for play later.

Drumstick results represent chickens you may take from your stash and prepare them for dinner. Take one token from your bag for each matching pair of drumsticks you have. The token is flipped to the cooked side and cannot be stolen. If you roll two of the double-drumsticks, you may cook two chicken dinners. One of each gets you nothing.

At the end of a player’s turn, if there are either no more chickens in the coop or the dog has reached a certain number on the dog track (depending upon the number of players), the game of Winner Winner Chicken Dinner ends immediately and proceeds to scoring. You will receive two points for each completed dinner token and one for every chicken in your bag. If there is a tie for most points, the person with the most dinner tokens is the overall winner, followed by the player with the most unplayed action cards.

While advertised for ages 8+, we feel that kids as young as five or six can easily enjoy Winner Winner Chicken Dinner if someone older is there to explain the rules. Ask for a copy at your favorite local game store, purchase direct from 25th Century Games on their website or have it delivered via Prime on Amazon. If you’re curious about what else 25th Century Games is cooking up, make sure you’re following them on Twitter or Facebook!

Oh, and about that rubber chicken in the box? It’s there so you can make your own house rules for using it in the game!