Last year at this time we were en route to Gen Con. We usually try to head to conventions a day or two early to get settled in, see some friends and help out with booth setup if any of our publisher friends need a hand. Over the years, we’ve developed a rapport with the people in this entertainment industry. They’ve come to value our opinions and the insights we bring to the table from our digital communities. Beyond all that, we’ve also become good friends and that’s worth its weight in gold. One evening last year, we had dinner with Anne-Marie and Justin De Witt from Fireside Games. Time was tight because they had several late-night meetings lined up, but they invited us to join them. Those meetings were with designers who were pitching game ideas in hopes of landing a contract to see their game produced under the Fireside Games’ brand. During and after each pitch, we all discussed the experience and potential. One of the games we tested during those meetings was Stringamajig, a party game for 4-10 players. 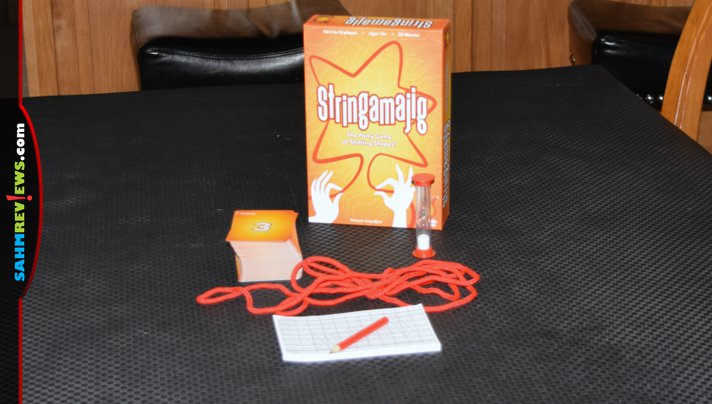 Usually in this space, I make a point of going over all the details of the setup. There isn’t much to say. Setup involves picking a player to go first, shuffling the deck of word cards then handing it and the string to the first player. Done. Oh wait, give someone the timer and someone the score pad and pencil. Now you’re ready.

When you’re playing Stringamajig, you’re working to get other players to guess what you’re “drawing” with the string. Think of it as a cross between Pictionary and Charades. Except you don’t have teams. Mostly. You mostly don’t have teams. That will make more sense in a minute. 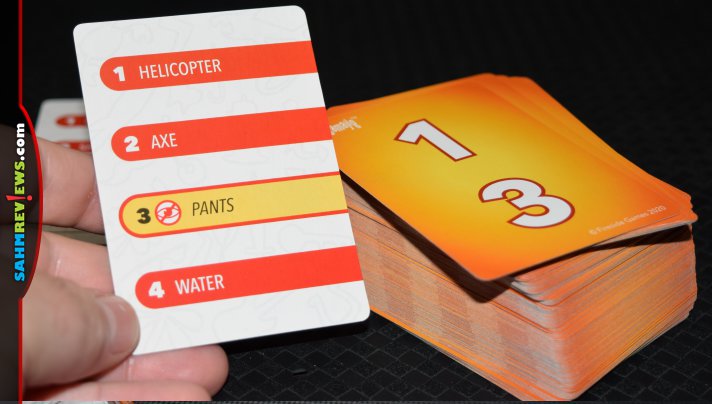 On your turn, you’ll draw a card from the deck and look at the front. Look at the back of the card on the remainder of the draw deck. It will reveal numbers that help you select which word you’ll be… umm… drawing with the string. Want to select one of the words for a number that isn’t on that next card? Keep wishing, but it’s not in the cards for you this time.

When you’re ready, the person with the timer flips it and you’re off and running. Use the string to draw a shape or image or something to convey the word you want the others players to guess. It doesn’t even have to be stationary. As long as the string never completely leaves the surface of the table, you can put the drawing in motion if it helps explain the word! Everyone simultaneously starts shouting answers while the timer continues to tick away. 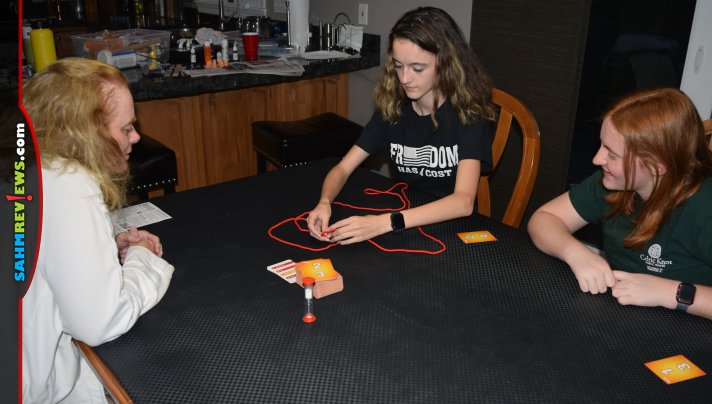 If someone guesses the word, give them the card then begin on another word. As long as the timer is still running, you can keep going. At the end of your turn, you – and the person who guessed correctly – each earn one point.

Of course, I have to explain the whole not-a-team-but-kind-of-a-team thing. This happens when you have a Challenge word to describe. Challenge words are identified on the cards by an icon and orange bar. There are three types of challenge words including 2-player, Don’t Look and Forbidden Word, each worth two points for the person drawing. In the 2-Player version, the person on your left is your assistant and the two of you must suspend the string in the air while trying to get other players to guess what you’re drawing. A correct answer will earn you two points while the assistant and guesser each score one. The Don’t Look challenge means you’ll be closing your eyes while attempting to draw the word on the table. In Forbidden Word, you have to discard the card and draw a new one if any opponent says the taboo word while you’re trying to get them to guess yours.

It’s been fun seeing this game progress from pitch to publication. They’ve even made a video to show how to play Stringamajig remotely! If you want to grab a copy of this for your next game night, ask your local game store about availability. Copies are available online direct from Fireside Games or on Amazon. You can also get tangled up in the fun by entering to win a copy here!