This year we’ve featured some great games from Jax Ltd. First there was Sequence Dice, one of our first Thrift Treasures. Then we told you about both Kazink! and Polygon. This week brings another great thrift store find from the same company:  Doodle Dice.

As kids we all played Yahtzee. Or maybe Triple Yahtzee. They were a lot of fun until you had to roll that dreaded 5-of-a-kind Yahtzee. Whether you got it or not pretty much determined who won and who lost. Luck had to be with you. The probability of getting a Yahtzee on a turn is exactly 4.6029%. I’ll spare you the advanced math, but if you’re interested there’s a great explanation over at the DataGenetics blog.

You might also remember our review of Sharp Shooters, where the combinations that you needed to roll changed every round. Well, Doodle Dice takes that premise one step further! No longer are there numbers at all, and what you need to roll changes with every turn! 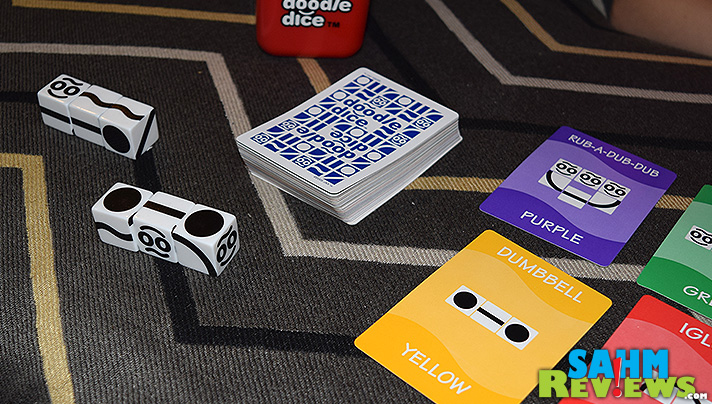 Your goal is to collect cards of each of the six colors by completing the design depicted on one of the card in the pool. Your turn is exactly like Yahtzee (except with six dice). You roll and then decide which to keep and roll two more times to complete your doodle. You can only possess one of each card color and the color of the card dictates the difficulty of the puzzle. Orange is easiest with only one die needed, purple is the hardest and requires all six dice to line up perfectly. 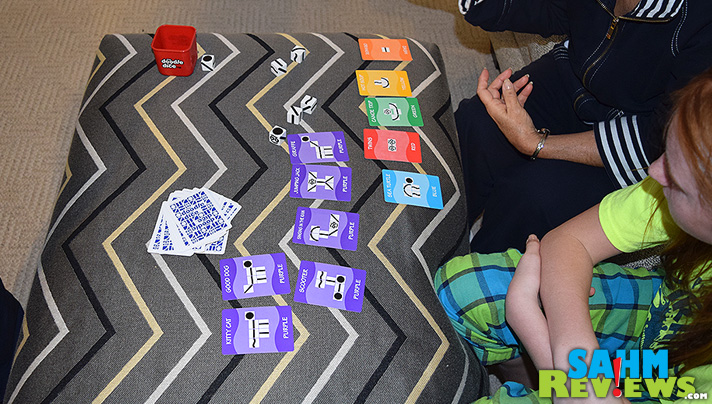 Of course, like Yahtzee, the hardest one is usually the last to be completed. With the unique addition of cards, each turn adds a new design to the stack of cards to be completed. Thus, if everyone is stuck on purple, completing one of them gets easier and easier with each turn as more combinations are added. 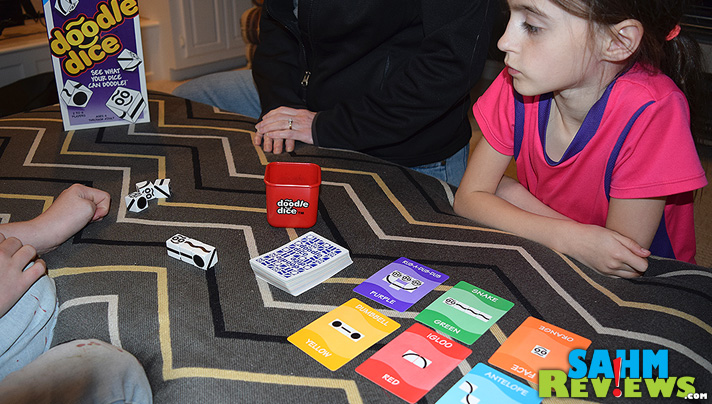 There are also bonus cards you can draw that allow you an extra roll or to force another player to skip a turn. Only need one color to make your set and there isn’t one on the board? No problem, you can steal cards from other players by declaring your intent to try to roll their doodle, and then successfully doing so. Unlike Yahtzee, this adds a bit more strategy to the mix and an interesting ‘gotcha’ among friends and family. 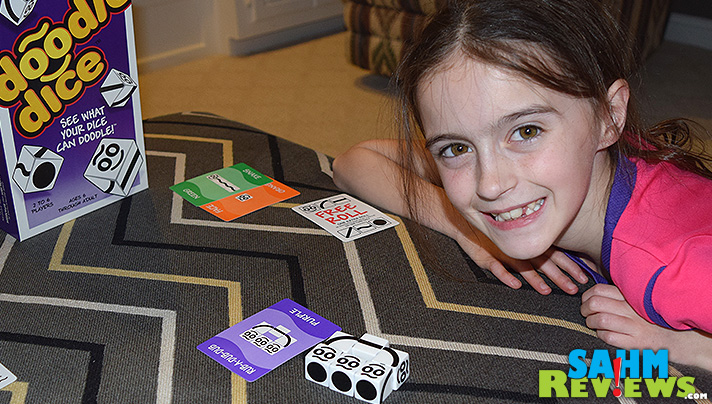 Ultimately I lost out to my youngest who rolled a perfect doodle on HER FIRST ROLL! How am I supposed to beat that?! (I couldn’t).

Because no two games are the same, Doodle Dice has a ton of replayability. We’ve already enjoyed it on more than a few occasions and I expect it’ll remain in our game arsenal for a while. Even though we found it for a couple bucks at our local thrift store, this fun game is available new for under $10! Doodle Dice is designed for two to six players and we found a game typically lasts 20-30 minutes.

I know I’ve mentioned it before, but it bears repeating. Jax Ltd. has quickly become one of our favorite age-appropriate game makers and you can’t go wrong with almost any of their products. They have a ton to offer on their website and I’m sure would love to hear from you! Tell them you saw another of their games on SahmReviews!