Last year some of our favorite family games came from one company, Jax. We played some new ones like Link-O and Polygon, and found others for our Thrift Treasure series at our local Goodwill. In fact, Doodle Dice became one of our Top 10 favorites of the year!

This week we found another Jax title – Takeaway. Using a standard 52-card deck (included), the object is to collect as many of the cards in your stack in a round, receiving one point for each. 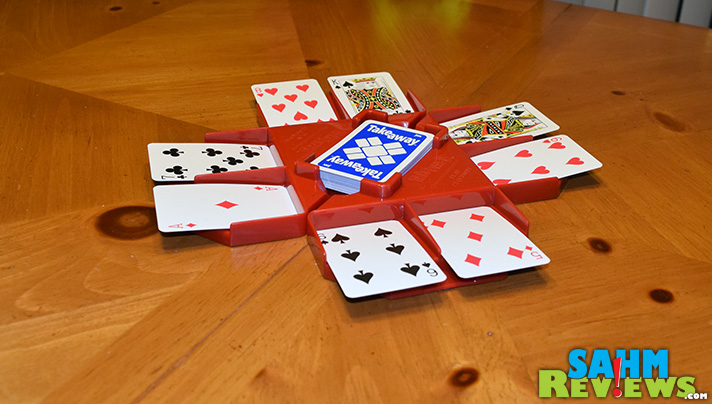 Each player controls the two slots in front of them (in a 2-player game you control four). You are trying to pair or find a run of two (same-suited) cards to combine. In the example above, if you were playing in your left slot, the six of spades matches up with the six of hearts. You would place the six of hearts (and any cards underneath it) on top of the six of spades, leaving your opponent with an empty slot. 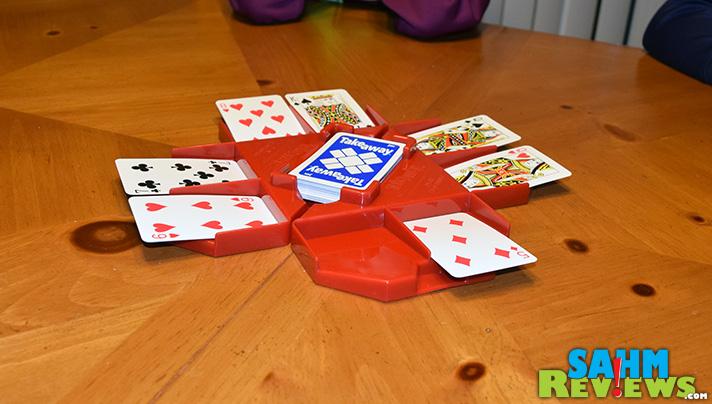 The empty slot plays into the game prominently, as turns are decided by the first person with an empty slot counting clockwise. There were many cases of back-and-forth between two players without the other two getting a turn thanks to how the cards fell. 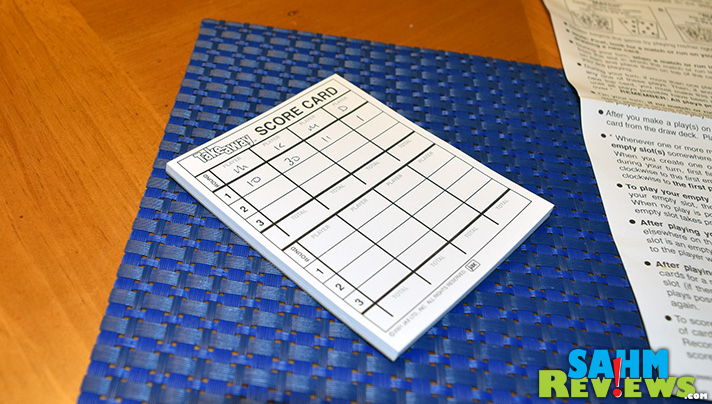 An entire game consists of three rounds with each round ending when the final card in the draw stack is played. There isn’t much strategy involved – the game is typically determined by the luck of the draw. Just because an opponent has a large stack early on, they can quickly lose the entire thing on just one card draw. Only towards the end of the game, if you’ve kept track of what has been drawn and what hasn’t, can you make some decisions that would allow your stack of cards to remain safe. 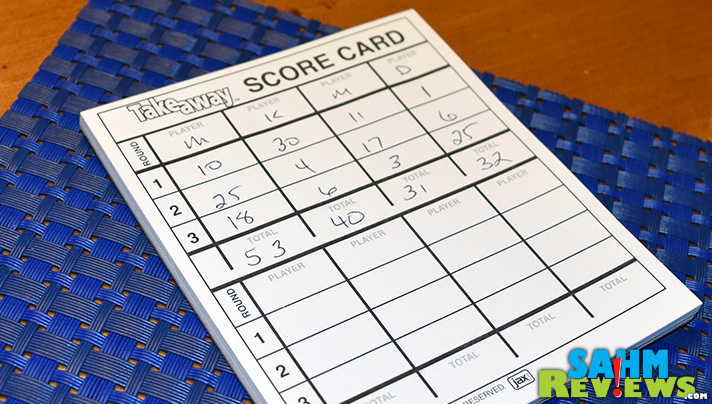 Takeaway is one of those games that can be enjoyed by all ages, even as young as 4 or 5, but definitely needs an adult to dictate the rules. Because the turn order is in a somewhat random fashion, keeping track of whose turn it is was a bit of a chore at the beginning. Once we all got the feel of how the game was played, it was no longer an issue. Just be aware that there is a little steeper-than-normal learning curve.

Our copy of Takeaway was issued in 2000, but it is still in Jax’s library today. And a nice touch, when you run out of score cards, you can print your own right from their website! You can find copies on Amazon for under $10 and it shouldn’t be quite like any other card game you have in your collection. Expect each game to last about 20 minutes, a perfect length when you’re waiting on your next hobby game to start up!