Home / Recreation / Games / Round and Round with Link-O 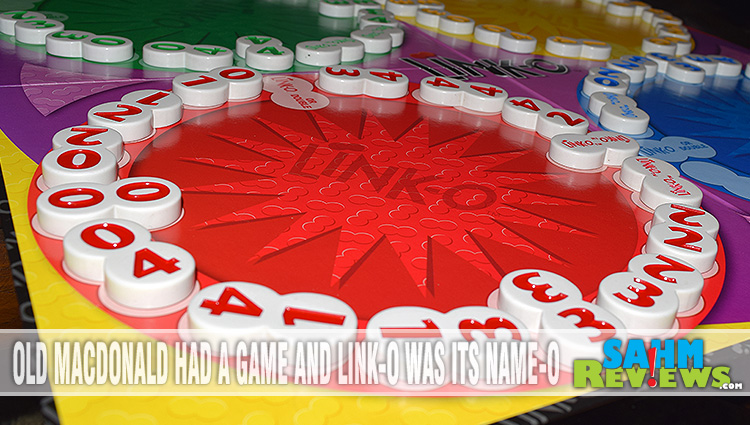 Round and Round with Link-O

Every household in America probably has a set of dominoes in their house. Either a set handed down or received as a gift at some point. Maybe you’re one of the (un)lucky ones to have a treasured Dora the Explorer set! Either way, I’ll bet it doesn’t see the light of day very often. But the premise of the game is very easy to teach, so we were happy to find a variation of the theme in the new game of Link-O by Jax Ltd. 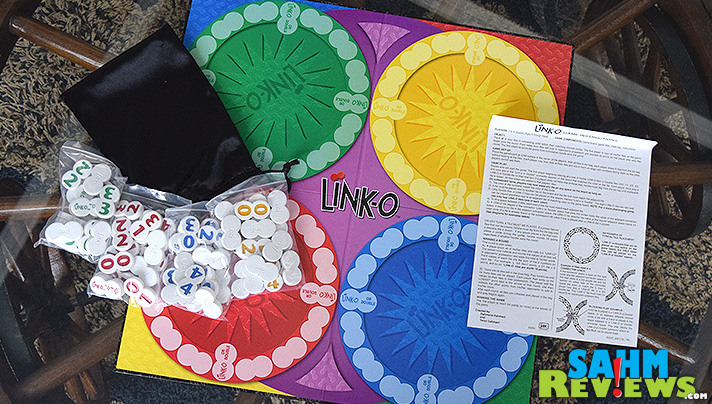 You may already know that we have a warm spot for games by Jax, with Sequence being one of our all-time favorites. At first glance we weren’t sure what to expect from Link-O, but we did immediately notice the good-quality ’tiles’ and the colorful game board. And like dominoes, the rules were easy to learn and allowed us to get playing in no time at all.

Link-O is played very similarly, each player draws eight tiles from the included bag and sets them on their edges to prevent other players from seeing their hand. 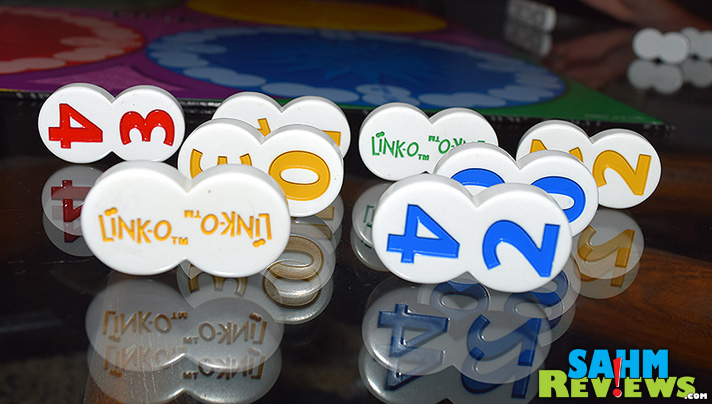 The player with the highest pair starts, and each player must start with a double to get the playing field started. Unlike dominoes where everything is built off of the starting tile, Link-O provides you with as many starting positions as there are players. 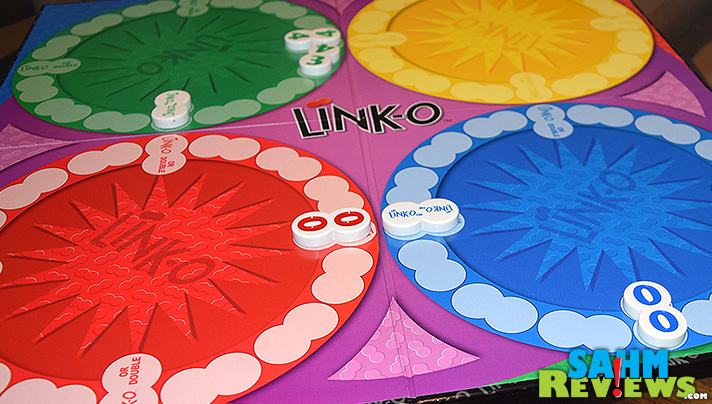 Starting tiles are placed in specially-marked points on the board and the color must also match the area you’re placing it. That’s the twist to Link-O, you can only play tiles in the corresponding colored area, so even if your numbers match, if the color is different, you’re out of luck. 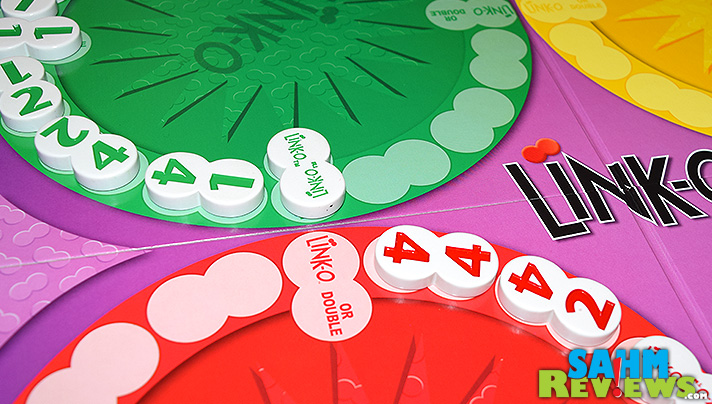 The layout of the board allows for a little bit of strategy if you see an opponent working on a specific string of numbers. When you get to the areas where the circles meet, the tiles must match in order to be able to play them. In the photo above, you’ll see a green 4/1 with a wild tile (double Link-O’s) next to it. Those represent 1’s also. In the red area the next valid tile must be a 4, but since the green wild tile is a one, there is no valid way to play a tile there. Thus, that area is now blocked. 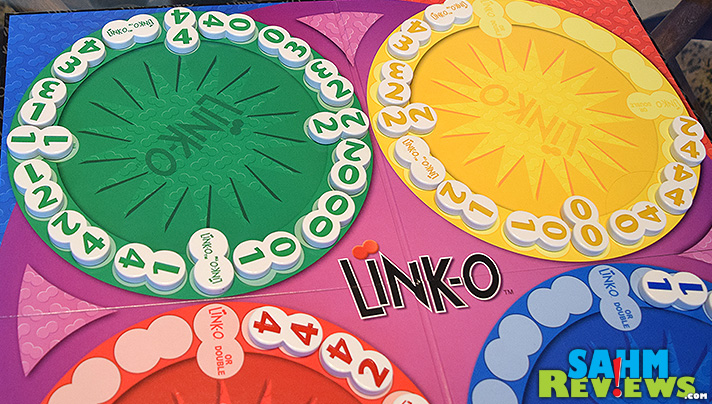 Play continues much like regular dominoes (if you don’t have something to play, you must draw until you do), filling up the board until either one person runs out of tiles or no valid plays can be made. At the end of a round tiles are summed up and added to the winner’s total score. In the even of a board with no more valid plays, the player with the lowest total wins and receives the points from all his opponents.

Multiple rounds are played until one player reaches a total score of 64 points (or more). As normal, the kids beat the adults! 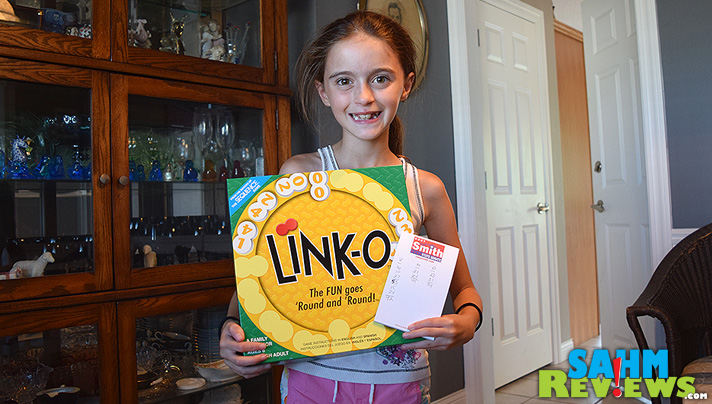 Because each round can go rather quickly, we found the overall play time to be right around 30 minutes. The perfect sweet spot for the attention span of a pre-teen (or teenager for that matter). Link-O would make a great gift under the tree this year for under $20, and if you need other ideas for kids in the 4-12 age range, be sure to check out their other offerings! 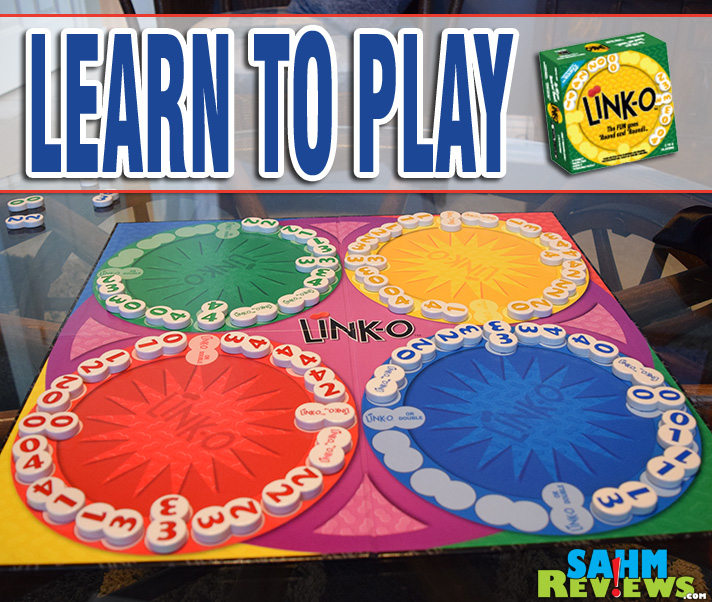 20 comments on «Round and Round with Link-O»