By now you’re fully aware of the streak of polyomino games we’ve unearthed. We traveled overseas with Copenhagen, Scarabya and Arraial then tested our green thumb with Cottage Garden and Bloom. That’s only the tip of the polyomino game iceberg. We have one more to tell you about: Ubongo! Fun-Size Edition from Thames & Kosmos!

You may recall our overview of Katamino a while back. It’s a puzzle-style game as well, but has a very different feel. In Ubongo! Fun-Size Edition, you’re racing against your opponents to use polyomino pieces to fill in a randomly shaped puzzle. In Katamino, the puzzle is always a square or rectangle and it’s more of a solitaire game. Ubongo! can be played solo, but it’s best when played with four people! 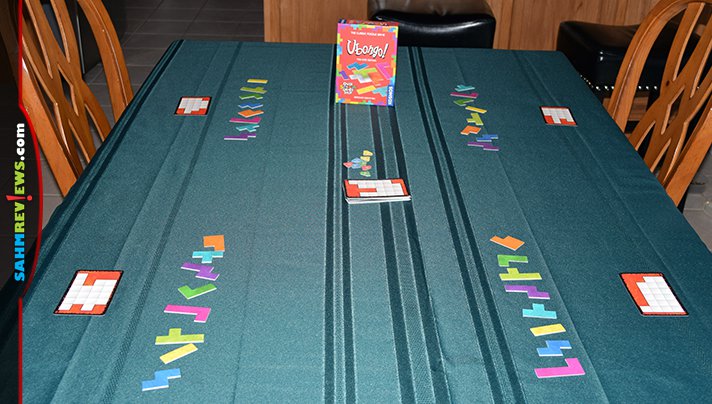 To set up a game of Ubongo!, give each player one complete set of pieces. Shuffle the puzzle cards and put them in the center of the table and place the gems next to the deck. The compact box makes it great for taking along on trips or bringing along to a restaurant. You only need enough space for everyone to place their card and arrange their tiles. 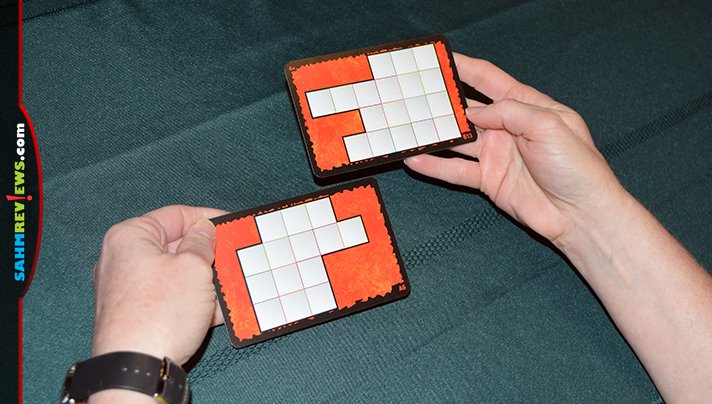 There are a couple different ways to adjust the difficulty of the game. The most obvious is simply determined by deciding on the “A” side of the card or the “B” side. You’ll use an assortment of three tiles when using the easier side (A) or four pieces on the higher difficulty (B). As an alternative, you may remove the yellow piece to increase the difficulty.

Once you have decided which side you’ll use, make sure the deck has that side facing down. Give each player one card and prepare to start the race! Someone signals the start and everyone flips their cards and begins to solve the puzzle. 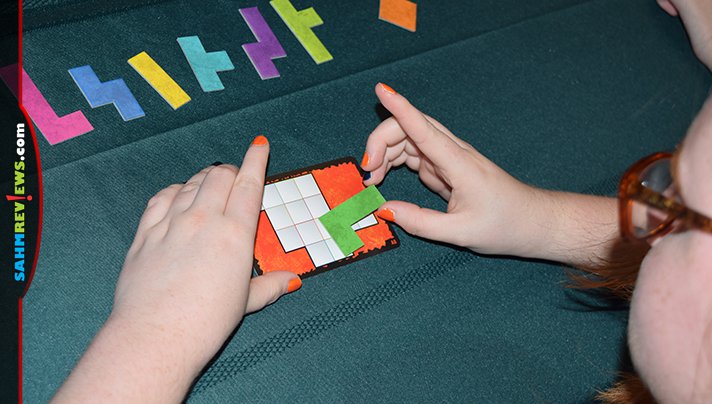 Players race to be the first to properly cover their puzzle without extending outside the lines. All players are working on randomly selected cards so there’s no concern for people looking at others and getting hints. Regardless, there are multiple solutions for each puzzle. 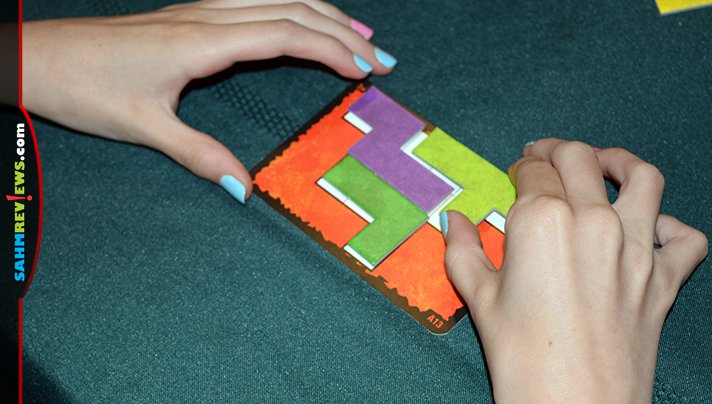 The first person to complete it yells, “Ubongo!”. From that point, the first player begins to count backwards from 20 allowing opponents one last opportunity to complete their boards. Anyone who successfully finishes before the “timer” runs out keeps their card as representation of a victory point.

In addition, the player who finished first receives a gem token which is also valued at one victory point. Any incomplete cards are returned to a discard pile. After eight rounds, the scores are tallied and the player with the most points wins Ubongo! Fun Size Edition. It’s a quick game that can be played by young and old alike. Children learn the concept of tangrams during elementary school so this isn’t difficult to grasp for even the youngest of players.

You can locate copies of Ubongo! Fun-Size Edition on Amazon or direct from the Thames & Kosmos website. Visit them on Facebook and Twitter to piece together the clues to what is coming soon. Here’s a hint to one that we featured in our list of games debuting at Gen Con: It’s like Ubongo! but it’s more extreme. I was hooked playing a demo at Origins so I’m sure we’ll be featuring it here. Stay tuned!

Do you enjoy puzzle games that require you to race against your opponents?