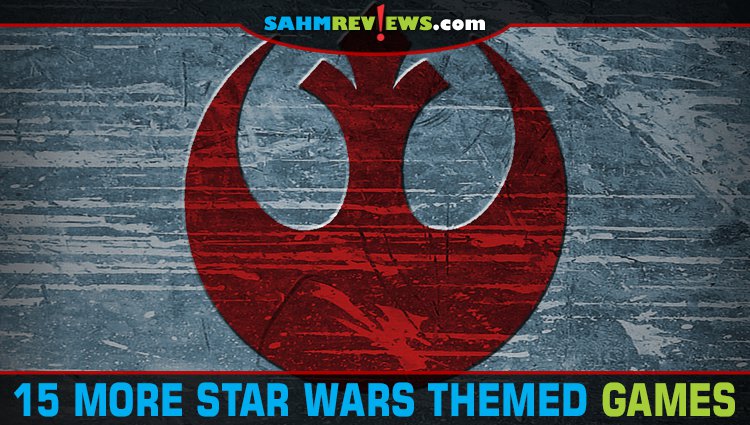 Last month we made you a promise. We showed the first half of Star Wars themed games in our 15 Star Wars Games You Didn’t Know Existed article, but the full list would require another fifteen from the latter part of the alphabet.

Take a few moments to refresh your memory with the original list and then continue with these recognizable games that have been given the Star Wars treatment! 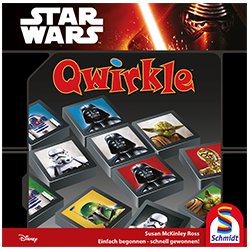 The abstract game of Qwirkle consists of 108 wooden blocks with six different shapes in six different colors. There is no board, players simply use an available flat surface.

Players begin the game with six blocks. The start player places blocks of a single matching attribute (color or shape but not both) on the table. Thereafter, a player adds blocks adjacent to at least one previously played block. The blocks must all be played in a line and match, without duplicates, either the color or shape of the previous block. 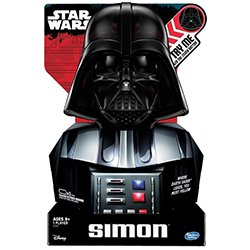 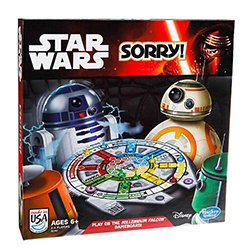 Race your four game pieces from Start around the board to your Home in this Pachisi type game. By turning over a card from the draw deck and following its instructions, players move their pieces around the game board, switch places with players, and knock opponents’ pieces off the track and back to their Start position. 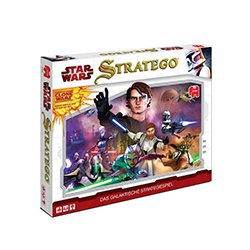 Stratego with Star Wars Clone Wars characters, variants include, quotes from box are; There are two ways to play Stratego – The Clone Wars: play the game as you would classic Stratego; or use the Force in the Clone Wars version where a number of playing peices have special powers, adding an extra dimension and extra tension to the game!

The Clone Wars have had catastrophic consequences for the entire galaxy, Can Yoda, Obi-Wan Kenobi and Anakin Skywalker call a halt to the Dark Side’s vile plans? 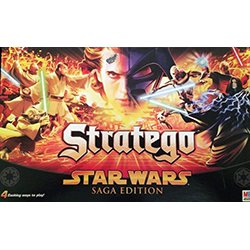 This game is very similar to the earlier Star Wars Stratego game. Unlike that game, however, this one includes characters not just from Episodes I, II, and IV-VI, but from Episode III as well. 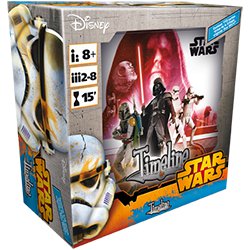 Timeline: Star Wars is a card game played using 110 cards. Each card depicts a Star Wars Universe event on both sides, with a number referring to the point in time in which that event occurred on only one side. Players take turns placing a card from their hand in a row on the table. After placing the card, the player reveals the time information on it. If the card was placed correctly with the number in chronological order with respect to all other cards on the table, the card stays in place; otherwise the card is removed from play and the player takes another card from the deck. 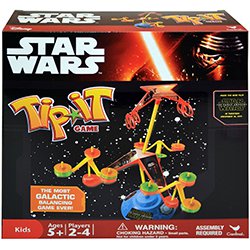 Test your nerves with the Cardinal Industries Tip It Game. Tip It is the ultimate balancing game that requires concentration and skill. Each player spins the pointer to find out what color disk to remove– without toppling the Tip It tower. The player that removes three discs of the same color wins. This exciting game demands steady nerves and perfect balance. Play it with the whole family for hours of balancing fun. 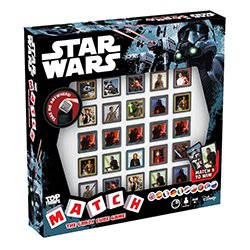 With the Force as your ally, can you get five in a row in this new Top Trumps Match game? With loads of Star Wars character cubes, from the Rebel Alliance to the First Order, see if you can make a row of 5 without your opponent altering the deal and stealing the match! It has an all-in-one carry case so you can play from Niima Outpost to the Forest Moon of Endor and beyond! 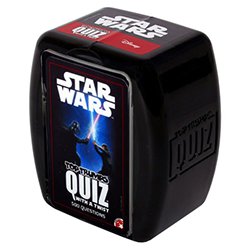 Are you a Star Wars expert? Can you identify the difference between Episodes 4-6 & 1-3? Can you remember specific scenes from Episode 7: The Force Awakens? Travel to a galaxy far, far away and test your Star Wars knowledge to see if you are a force to be reckoned with. With 500 questions to answer, it’s great for the whole family, whether you want a quick game on the go or to spend some time seeing how much you really know! With a Top Trumps twist at the end to test your memory, can you remember what you learned just moments ago? 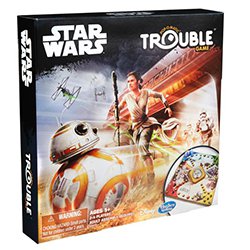 The Trouble: Star Wars edition game combines classic Trouble fun with the thrill of the Star Wars Universe. Give the bubble a pop and move around the board, following BB-8’s journey on Jakku. When BB-8 shows up, everyone can move a pawn out of home for a fun and fast-paced game. Be the first player to get all 4 pawns to the finish spaces to win! 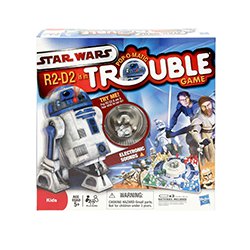 New pop-o-matic R2-D2 Trouble! Engage kids in a new way with the Clone Wars animated R2-D2.The game play of Trouble with the Clone Wars R2-D2 character combine to create a unique Clone Wars Trouble experience. Includes real R2-D2 electronic sounds. Be the first to get your pawns home to win!Trouble is a board game with a simple concept: Be the first player to send your four game pieces all the way around the board, moving spaces determined by rolls of the dice. 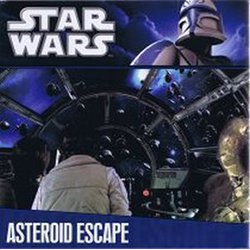 Each player has a spaceship marker that comes on the board by one edge. In his turn player places a tile that will advance his marker on the board, creating a path. Also players must avoid asteroids flying on the board. The goal is to remain on the board last and therefore push his opponents off the set by forcing their path out of bounds.

This game is an adaptation of Tsuro with a new twist: Asteroids will disrupt things. 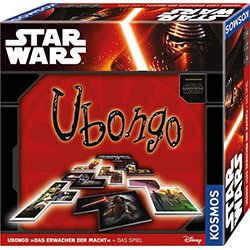 Ubongo: Star Wars: Das Erwachen der Macht merges the best-selling Ubongo game with numerous motifs from Star Wars: The Force Awakens, with the Jedi players racing against time to demonstrate their skill in covering ground with the predetermined tiles, no matter the light or dark side is in play. Whoever succeeds in time moves their spaceship ahead in the galaxy, with the fastest players naturally moving farther. After seven rounds, whoever has explored the galaxy the most wins. 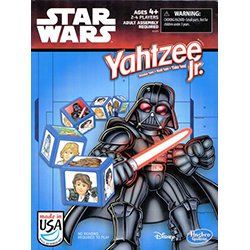 On each turn, you roll the dice UP TO THREE TIMES, trying to roll as many of the same characters as you can. You roll Yahtzee style … selecting the dice you wish to re-roll … and re-rolling up to two times after your first roll. 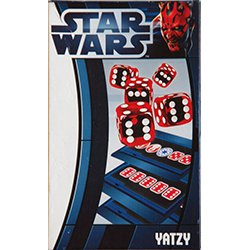 As in Yatzee you throw five dice. You can throw each die 3 times and you score by getting certain combinations.

In Star Wars Yatzy you don´t have a fixed set of combinations, but instead you draw mission cards. Each player have two mission cards and they draw a new if they have less than 2 cards. you dicard a card if you finish a mission. If you don´t use all your throws you can add one mission card. When one player has finished 8 missions, the game ends and the player with most points wins.

We’ve talked about a number of these games in the past, but never the Star Wars versions!. Ubongo! and Qwirkle are parts of our permanent collection, as is Tsuro. We’ll have to search long and hard to procure the Star Wars versions of them since they were only released overseas! But that’s half the fun of collecting – the hunt!

Have you played any of these Star Wars themed games?