2019 was certainly a banner year for movie franchises. In the Spring we saw the end of the story line for the Marvel Cinematic Universe with the release of Avengers Endgame. In December the ninth and final movie in the Star Wars saga was released. Fortunately for us fans, we can continue to get our fix through television series and independent character features.

We’ve always combined our love for all things Disney by looking for games that pay tribute to their licenses. In 2018 we featured our first list of the best Marvel-themed games and followed that up with last year’s update of 10 More Marvel-themed Games. We just realized we haven’t paid tribute to our 2nd-favorite franchise, Star Wars!

So here’s part one of our list of Star Wars themed games you may or may not be aware of. This entry is a little different than our Marvel one. We’ve ignored RPG or miniature-based games, as well as anything -opoly and variations of Trivial Pursuit. Games specifically designed around the Star Wars Universe are also omitted! This list is only about re-themes of games you already know, with maybe only a rule change or two! 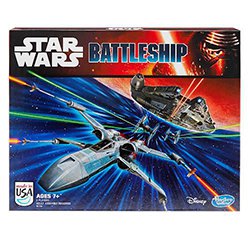 Hunt, strike, and win the galaxy with this Star Wars version of the classic Battleship game! Just like in the classic game, you fire your shots at enemy ships on a concealed grid, using white pegs to record misses and red pegs to record hits. But these ships are enemy starships! Can you figure out where your opponent’s starships are before your ships are destroyed? Whether you take the Rebel or Imperial fleet, take your shot and see if you can make your opponent say “You destroyed my starship!” 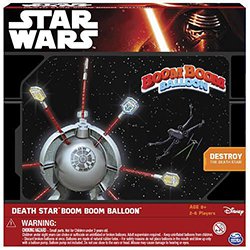 It’s Star Wars Death Star Boom Boom Balloon, the crazy and unpredictable game where at any time the balloon can go BOOM! In this Star Wars Edition, it’s a race to destroy the Death Star. Players take turns attacking the Death Star, but no one knows when it will go BOOM! Roll the die, and carefully push in a stick until it clicks. Squeeze and stretch the Death Star – will the next click make it pop? Be the leader with the most X-wing Starfighters in play to win! Bring home the thrill of Boom Boom Balloon – Star Wars Edition! 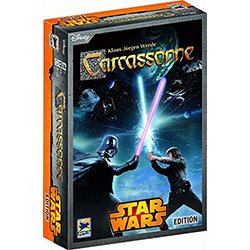 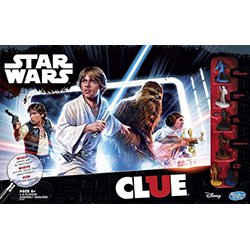 As you might expect from the title, Clue: Star Wars transports the gameplay of Clue to the world of Star Wars. In the game, it’s a period of civil war, and players have managed to sneak onto the Empire’s ultimate weapon — the Death Star! Be the first player to find out which planet Darth Vader plans to destroy next, in which room the Death Star plans are hidden, and which vehicle is the correct escape vehicle. The cards revealing the correct planet, room, and vehicle are placed in the mission folder at the beginning of the game so that no one sees what these are until the end of the game. The player who correctly identifies what’s in the folder wins! 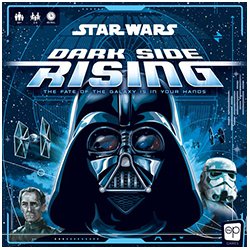 Star Wars: Dark Side Rising is a co-operative card and dice game inspired by the events leading up to and through Star Wars: A New Hope. In the game, players must work together to recruit rebels and prevent the construction of the ultimate weapon, the original Death Star. 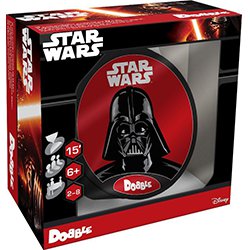 Spot it!, a.k.a. Dobble, is a simple pattern recognition game in which players try to find an image shown on two cards.

Each card in original Spot it! features eight different symbols, with the symbols varying in size from one card to the next. Any two cards have exactly one symbol in common. For the basic Spot it! game, reveal one card, then another. Whoever spots the symbol in common on both cards claims the first card, then another card is revealed for players to search, and so on. Whoever has collected the most cards when the 55-card deck runs out wins! 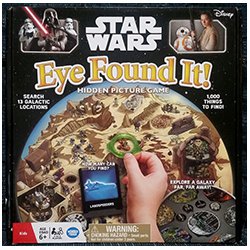 Blast off on a location-hopping adventure through the Star Wars galaxy, from Tatooine and the Death Star, to Jakku and more! Search the galaxy for over a thousand characters, starships, Droids, and artifacts in a quest to find R2-D2!. 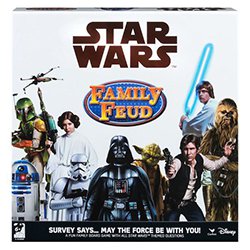 It’s time to play, Star Wars Family Feud! Are you ready to take on the challenge? Survey says, yes! One of the most popular games in the world now has a twist. The entire family can experience the fun of Family Feud as they never have before through the magic of one of the greatest movie franchises of all time, Star Wars. Based on a national survey, Cardinal Games placed the top answers on 150 Face Off cards. Figure out the most popular answers and rack up the points. Face off in three rounds, then play the Fast Money Bonus Round with 50 Fast Money cards. 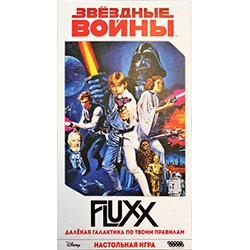 In Star Wars Fluxx, you will find yourself in the thick of battles for a distant galaxy. Draw a card, play a card, shoot from the Death Star, and use the Force. But remember that the rules can change at any time and then, by joining the Emperor, you will save the Rebel Alliance from defeat. 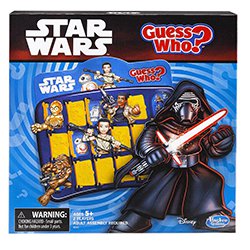 The mystery face game where you flip over a collection of faces with different color hair, eye color, hair, hats, glasses etc. to deduce who the secret person is that your opponent has chosen. You flip over the hooked tiles as you narrow your choices by asking characteristic questions. 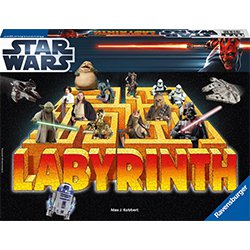 Star Wars Labyrinth uses the same basic game play as Ravensburger’s decades-old title The aMAZEing Labyrinth. Players try to move through a labyrinthine game board in order to reach a desired symbol shown on a game board tile that matches a hidden card held by this player. The game board consists of a number of fixed tiles as well as rows and columns in which tiles can slide back and forth; these tiles show tunnels – T-shaped, straight, and otherwise – and a player can move his token only along the path as it exists on his turn. 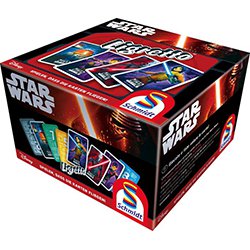 In Ligretto, each player has his own deck of forty cards, with cards 1-10 in four colors and a unique symbol on the back to identify which cards are his. At the start of each round, each player lays out 3-5 cards (depending on the number of players) face up in front of him to create his row; places a face-up stack of ten cards, seeing only the top card, next to his row to create his Ligretto stack; and holds the remaining cards in hand face down. 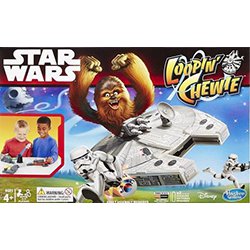 Loopin’ Chewie is out and about and he’s going to come after the Stormtroopers with his piloting skills! Every time he flies by in his Millennium Falcon vehicle, he’ll be out to knock another Stormtrooper off. But if you can flip him out of the way with your paddle, he’ll go after someone else’s Stormtrooper! Be ready, though, because he’s got some super-dodgy moves! The player with the last trooper standing wins! 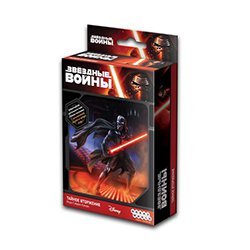 The game is played with only 17 cards. At the beginning of the game, one card is removed at random, then each player draws a card. The game is played in several rounds. Each round represents a stage in the escape plan. At the end of each round, one of the players will get closer to the plan’s realization and receive a special token. As soon as someone’s got enough tokens, that player will rescue Leia and take her to the Rebel Base. 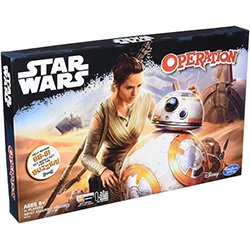 This fun version of the Operation game combines classic Operation gameplay with the excitement of the Star Wars Universe. Who can get BB-8 rolling again? After being rescued on Jakku, BB-8 is on the blink and looking for a steady hand to repair him. Remove his defective droid parts and get him rolling again, but watch out for the buzzer! The game ends when all 12 defective droid parts have been removed. Collect the most droid parts without getting buzzed, to win.

There’s a lot of familiar classic titles in this list like Operation, Guess Who? and Clue. And just as many modern hobby games that have jumped on the Star Wars bandwagon (starship?). A number of them surprised us as well! We knew of the Star Wars version of Carcassonne, but had no idea there were examples for Fluxx and Ligretto. Probably because they were only released overseas. Now I need to find a friend who is willing to ship them internationally!

Stay tuned for part 2 of our list in a couple weeks!

What is your favorite Star Wars themed board game?