Years ago when we first started getting into board games more seriously, we began attending a weekly game night hosted at a local college. Each week 30-50 people would show up to play all types of board and card games of various levels of difficulty. Before joining, we had only played a few modern board games and would quickly become overwhelmed with all the choices we had of new games to play.

Fortunately for us we met new friends who were willing to hold our hands as we tried out new games. They started us on some of the modern-day classics like Pandemic and Ticket to Ride. We also played a number of card games. Two of them stuck in my mind – Sheriff of Nottingham and Sushi Go!. We ended up purchasing copies of both games for our own collection!

This past summer, Gamewright released a follow-up to the extremely popular Sushi Go! in the form of a dice game. Now, usually we find this type of game issue to be “OK” but not nearly as good as the original. As you’ll see from Sushi Roll, this is not what happened. We may go as far as to say it replaces the original Sushi Go! in our game bag!

The premise of a game of Sushi Roll is nearly identical to the original Sushi Go! in that you’re collecting matching items to score point. Instead of passing cards, you’ll be watching the dice, representing items you would receive at a sushi bar, move around the table as if they were on a conveyor belt. Each player begins the game with a personal tray and five tokens (3 menu, 2 chopsticks). All of the dice are put into the dice bag and conveyor belt trays are placed in front of each player. Each person draws a number of dice from the bag, depending on the number of players, then rolls and places them on their current conveyor tray. 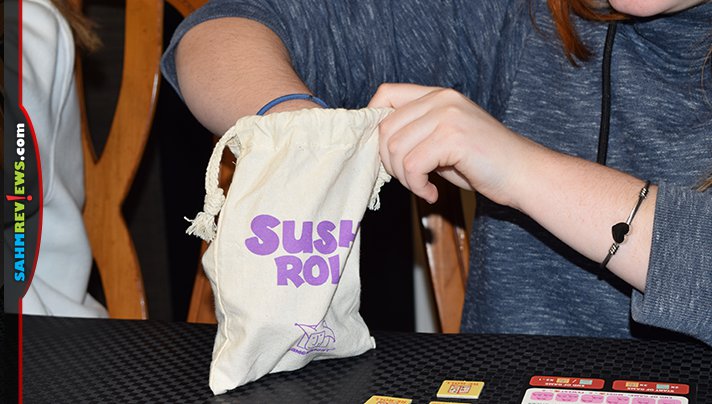 Sushi Roll is played over two full rounds, with each person taking turns at being the first player act (denoted by the red outlined conveyor tray). On a turn, a player optionally decides first whether or not to use any of their available tokens. A Menu token allows the active player to take any or all of the dice on their conveyor belt tray and reroll them. A Chopsticks token gives them the power to choose any one die from their conveyor tray and swap it with a die on another player’s conveyor. These tokens may be used in any order and as many times as there are tokens available. All spent tokens are returned to a community pool.

The second part of a turn in Sushi Roll is mandatory. The active player will choose one die to keep and move it from the Conveyor Belt to their personal Tray. Different die colors and faces will determine the subsequent action taken. If the die is a pink Pudding die, you also immediately take a number of pudding tokens equal to the die’s result. Menus or Chopsticks on the die allows you to earn more of the matching tokens to be spent at a later time as described above. There is no limit to how many you may have other than the total quantity is limited to how many are included in the game box. 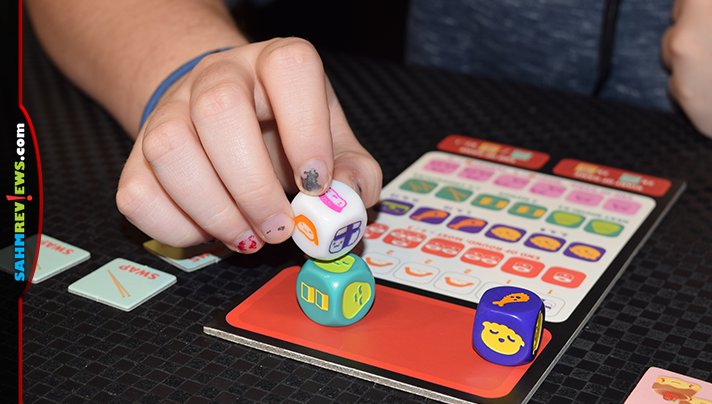 The other dice feature different types of sushi, appetizers and condiments. You will be collecting them to score at the end of the round. If you collect a wasabi die and then grab a nigiri die on a subsequent turn, the nigiri die is placed on top of the wasabi and will score three times as much! 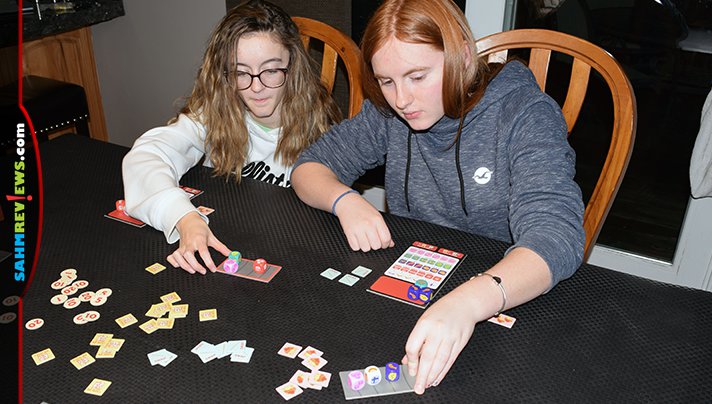 Other food types you’ll find in a typical sushi establishment are also represented. An increasing number of points are awarded for collecting multiple dumplings, tempura or sashimi. If you have the most (or second-most) maki roll symbols collected, you’ll also earn points. Once everyone has had a chance at selecting their die for the turn, slide the conveyor belt trays clockwise and begin choosing another! When there are no dice on any of the conveyor trays, the round officially ends. 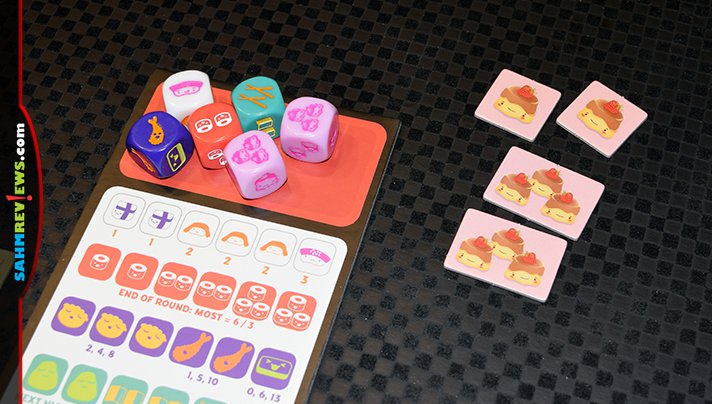 After all players have tallied their scores for the first round, all dice are returned to the bag and another round is played in the exact same manner! At the conclusion of second round scoring, the player who has collected the most pudding tokens earns additional points while the person with the fewest will lose points! Whomever has the most overall points wins Sushi Roll!

Thanks to the inclusion of dice and the ability to see all of the items coming your way, we found Sushi Roll to be even better than Sushi Go! We think you will too! Pick up a copy from Amazon or at your favorite local game store. Find out what is fresh over on Gamewright’s website and be sure to follow them on social media (Facebook, Twitter) to discover what’s coming down the conveyor next!

Have you played any other sushi-themed games?