Lots of people spent their Christmas surrounded by fluffy white stuff on the ground. We did too, but our white stuff was sand. “Sugar white sand” is how it is described in the brochures. Taking a much-needed break from the usual, we booked a short stay at a home on a beach in Florida’s panhandle. Even when it was raining, the background sounds of the waves crashing on the shore provided us with comfort that cannot be achieved at home. Along with extended family, we decided to spend a lot of time relaxing, napping, shopping, napping and playing games. And napping. Did I say that yet?

One of the games we brought along was Santa’s Workshop by Rio Grande Games. The Christmas-themed board game seemed like a natural fit for the trip. Santa’s Workshop is a board game where elves are competing to amass the most Christmas cookies by the end of nine days. Cookies are earned by collecting materials to assemble toys that match the requests that Santa has received in the mail. 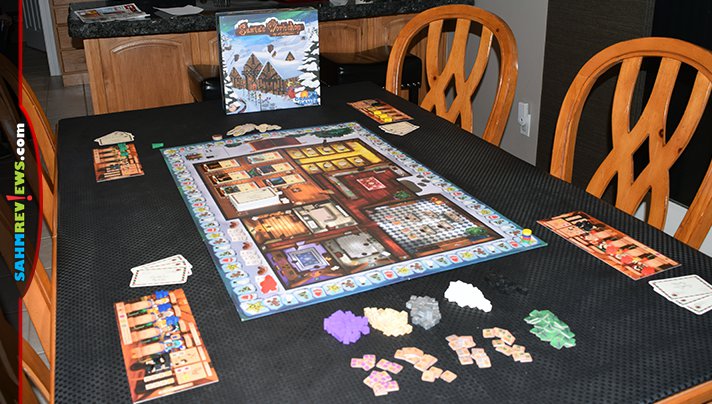 Santa’s workshop board game takes place over nine rounds, each represented by a day on the calendar. To begin the game, players select a color then take the related player mat, elves, scoring disc and scoring token. Place the board in the center of the table and create general supplies of material cubes and tokens (cookie, assembly and training). Based on the number of players, cover action spaces that won’t be used during the game and distribute a starting allotment of coal to all players. Shuffle the deck of gift cards, add some to the Mailroom and deal 3 to each player. Everyone keeps at least one to try to fulfill (like we recently described in our overview of Ticket to Ride London). 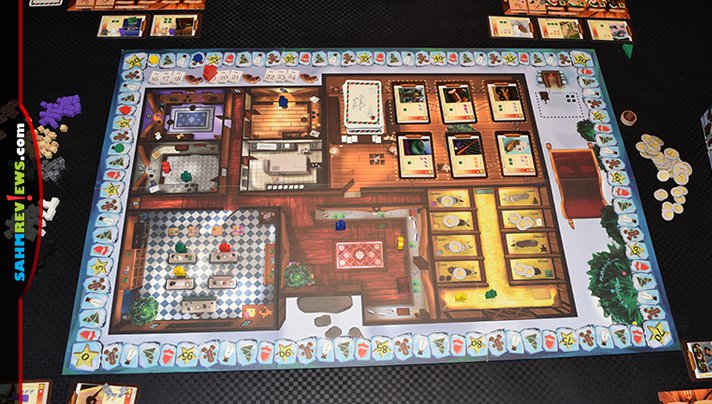 The board is divided into four primary sections. 1) The day (rounds) and cookie (scoring) tracks are for monitoring the progress of the game. 2) Locations around Santa’s Workshop where elves work their magic including workshops, classrooms for training, reindeer stalls, labs, Mailroom and the coal mine. Santa’s sleigh is where the completed gifts go (duh, so he can deliver them). 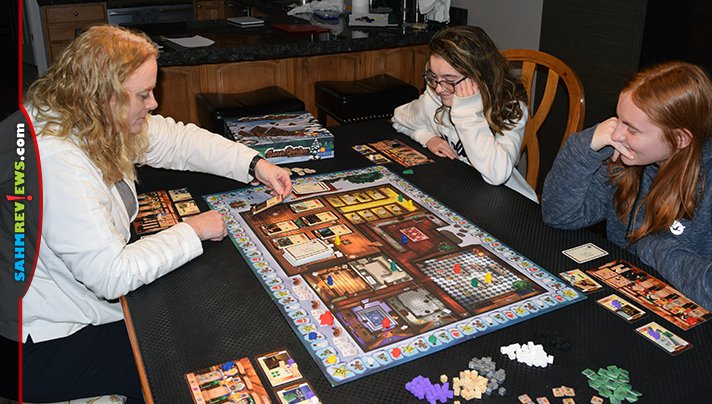 Each of the 9 days consists of the “Start of Day” phase, the “Workday Actions” phase and the “End of Day” phase. The first phase includes repopulating the board. That’s it. In the second phase, all players take actions with their elves. Finally, you wrap up the day by retrieving all your elves, move one space on the day track and award cookie bonuses when applicable. 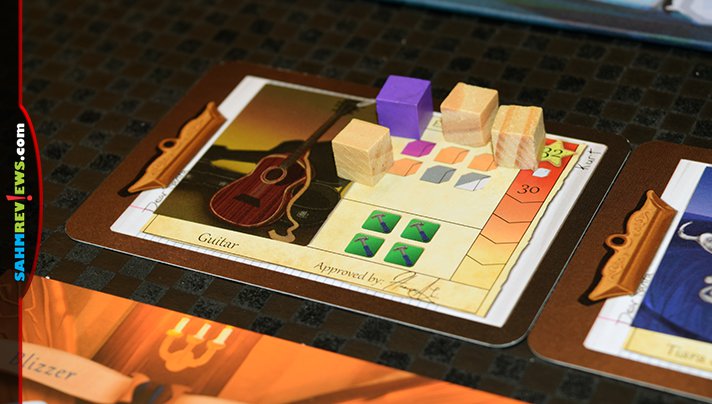 As elves, you’re trying to fulfill as many letters to Santa as possible. Each card displays the material and assembly requirements to indicate what materials can be used to craft it and how much assembly it will take. You’ll also see the number of cookies you can earn for completing it. Plastic is easier to acquire, but yields an inferior product thus earning you less cookies. Higher grade materials ensures you’ll earn more cookies. You’ll start the game with at least one gift card, but you can send elves to the Mailroom to pick up more. Don’t overdo yourself though since you can only have five unassembled gifts at any time. 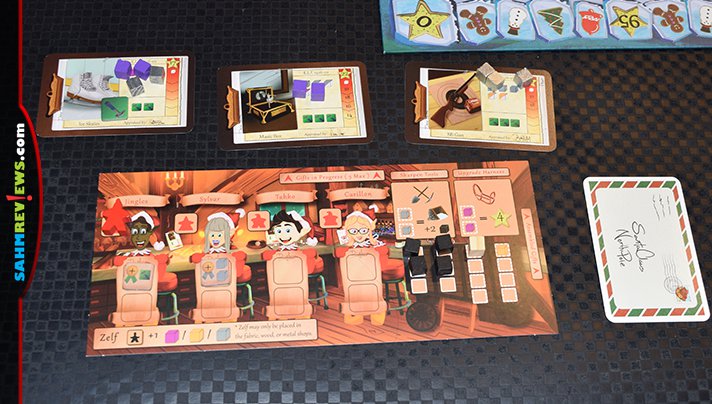 Go throughout the workshop training elves, upgrading your coal cart, feeding reindeer and visiting the shops and labs. If you send your elf through training, that one will be more efficient when collecting materials. With a limited number of spaces for gathering, having an elf that can earn more can make a difference in how quickly you are able to complete the items you’re working to assemble. However… Unlike many games that involve resource gathering, in Santa’s Workshop you have to be able to make use of what you collect. If you don’t have a project in the works that requires the extra goods then you need to discard them. Resource gathering actions have a cost associated with them and in Santa’s Workshop, that cost is coal. If you run low on coal, a visit to the coal mine is in order. 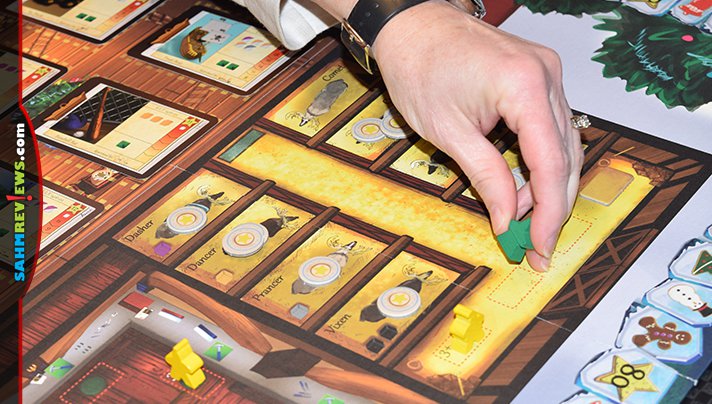 What you probably didn’t know is that Santa’s reindeer didn’t just stand around playing games while waiting for their annual adventure around the world. They have dreams of helping in other ways so you’ll earn bonuses (and cookies) when you tend to the reindeer. You can send your elves to the stables to earn the right to be first player for the next round, an extra assistant for one round, goods, assembly tokens and more.

You’ll continue to send your elves on these errands to fill Santa’s sleigh and after nine days (rounds), the team of elves who earned the most cookies wins Santa’s Workshop. It’s a nice introduction to a worker placement game with enough variety of action options to feel like you aren’t constantly anguishing over a spot that’s been filled by someone else. That’s one of the hardest things with these types of games. While I wouldn’t encourage playing it with young kids, I could easily see tweens picking up on it if it’s explained. If you’re interested in adding a copy of Santa’s Workshop to your collection, watch for it with other Rio Grande Games on Amazon or ask your local retailer if they stock it. As a last resort, you can find copies on eBay. Reach out to the publisher on Twitter and Facebook to find out about their other games.

What would you want Santa’s elves to make and deliver?