With New York Toy Fair around the corner, followed closely by GAMA (Game Manufacturers Association) Trade show, I’m already getting an onslaught of emails from companies asking if we’ll be in attendance. It’s not unique. It happens whenever there’s a major event coming up. Whether it’s the Consumer Electronics Show in Vegas, the Chicago Auto Show, SxSW, a film festival, or any number of other events, we receive several requests to feature their brand/client/product/whatever on our site. More often than not, the company name rings a bell, but that isn’t always the case. Last year someone from Good Games Publishing reached out and asked us to stop by their booth at Gen Con. I agreed because we have a passion for getting families to play more games which is best done by showcasing the variety of games available. It didn’t take any time at all to realize I had already heard of some of their games, just didn’t recognize who the publisher was. As we sat down at their exhibit space at the convention, we learned about a few others, too.

Fluttering Souls is a 2-player card game about collecting butterflies. It’s plays quickly over 3-5 rounds lasting a total of about 20 minutes. The deck contains 21 cards depicting five different types of butterflies, five butterfly tokens and 15 layout cards. You’ll earn points based on the collection you amass. 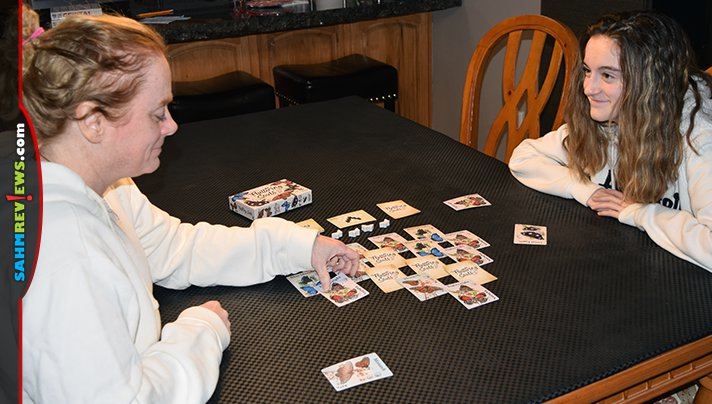 Select a starting player then give the second player the Great Eggfly card. On your turn, you may select any card that is not covered by another. Place your selected card in your player area then reveal any facedown cards you’ve opened up. After you have drawn and revealed, if you possess the Great Eggfly card, you may replace the card you just collected with it. 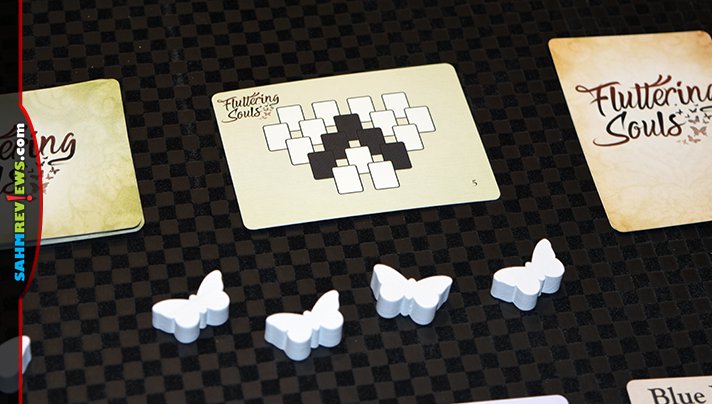 Play continues back and forth until all cards are claimed. Calculate points based on the sets of cards you’ve acquired and the player with the most receives butterfly token. Draw a new layout card and start a new round. This continues until one player has collected three tokens. That person claims victory in Fluttering Souls!

Seasons come and seasons go, but have you captured enough fairies along the way? Fairy Season is a card game where players are constantly upping the ante of their opponents in an effort to win the stack which is also referred to as the swarm. 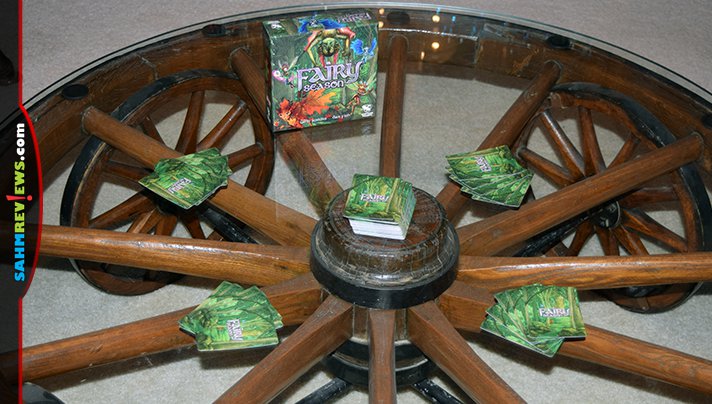 As with most card games, setup is simple. Shuffle all the cards into one deck and deal five to each player. The rest are placed in the center of the table to use as a draw deck. 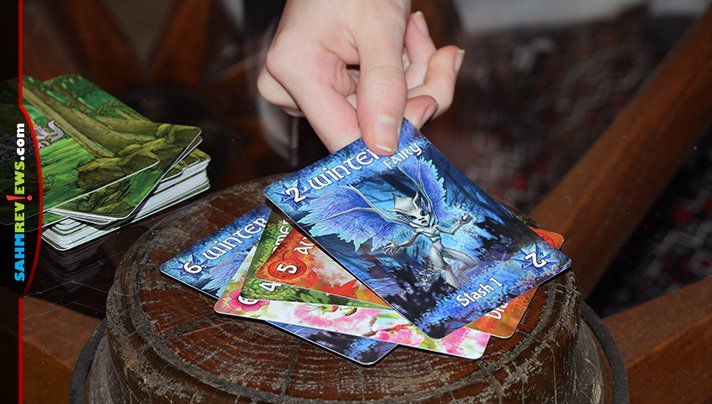 The first player places a card in a central discard pile to begin a swarm. The player uses that’s card’s ability, if possible. Some Fairy cards allow you to draw or stash cards, Goblins do special tricks and Traps capture the whole Swarm. Then play passes to the left. 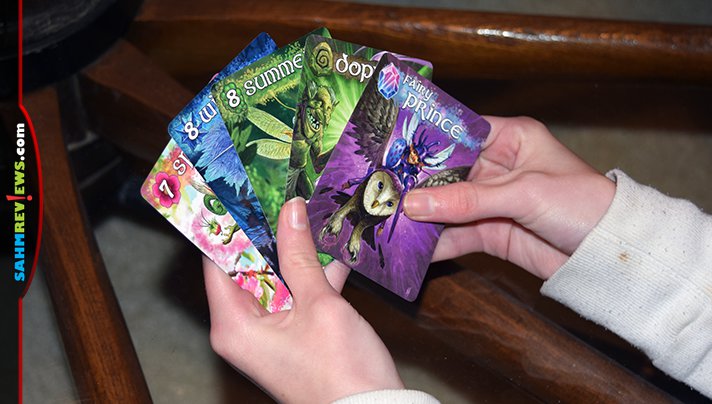 The next player needs to play a higher card from the current season, any card from the next season or a special card. If that player isn’t able to meet the requirement then other players can opt to play a Royal Fairy. If nobody is able to top it then the starting player wins the Swarm, collects it and adds it to their stash. 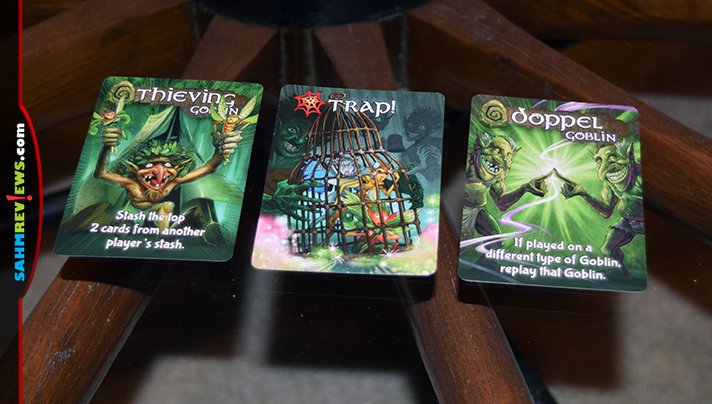 The process continues until the draw deck is depleted. The player with the most points in their stash is the winner. With the inclusion of Traps and Goblins that break the rules, Fairy Season is more than just another trick-taking game. Accommodating 3-5 players, Fairy Season is a quick game that’s perfect for occasions when you don’t have a lot of time to play.

It’s almost Spring Break which means families will be heading to amusement parks. I remember the first time I took Madison on a roller coaster, she was scared beyond my expectation and insisted she would never ride one again. She’s a teenager now and let’s just say she’s been on more roller coasters in the past year than I’ve been on in the past ten. Those family trips to Disney were the first thing I thought of when I started playing Unfair. It’s a game about creating the best theme park. 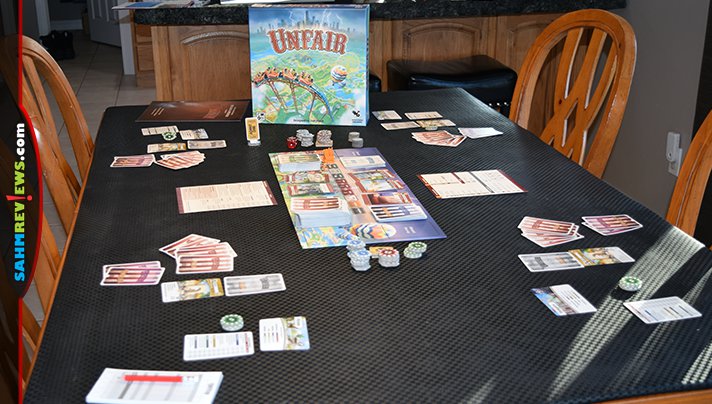 There are six different theme packs in the game, but you’ll only use as many as there are players. This gives variety to each game. Each player takes the Main Gate card, summary card and Loan card from their respective deck in addition to 20 coins. Place the board in the center of the table and place shuffled Park, Event, Blueprint and City cards as noted in the directions. Distribute Showcase and Park cards and you’re pretty much ready to go. Okay, I simplified it a lot, but you get the idea. 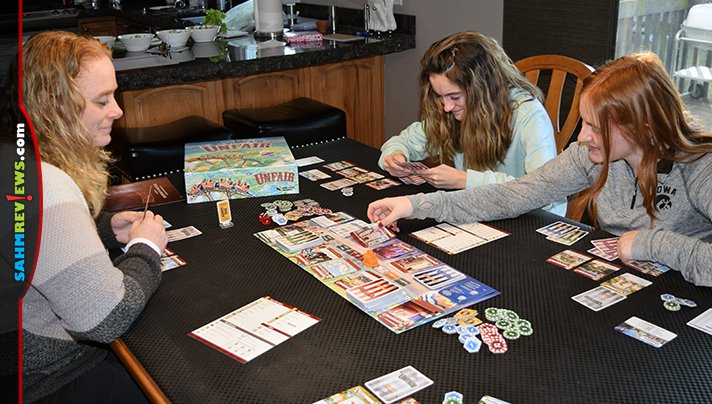 A game of Unfair is only about 8 rounds with each one including multiple steps. You begin each round with events then move on to the Park steps. You’ll take turns taking cards, building, upgrading or demolishing attractions and collecting loose change. Money is earned based on how well you’re able to attract visitors to your park which is determined by the types and quality of the attractions you have invested in. It’s worth noting that it’s not a quantity over quality game since your park can only hold a limited number of attractions and has a cap on attendance as well. You’ll want to provide thought as to what you build and how well you upgrade those five. At the end of each round, players open the gates for guests who pay admission and spend money on souvenirs and snacks. 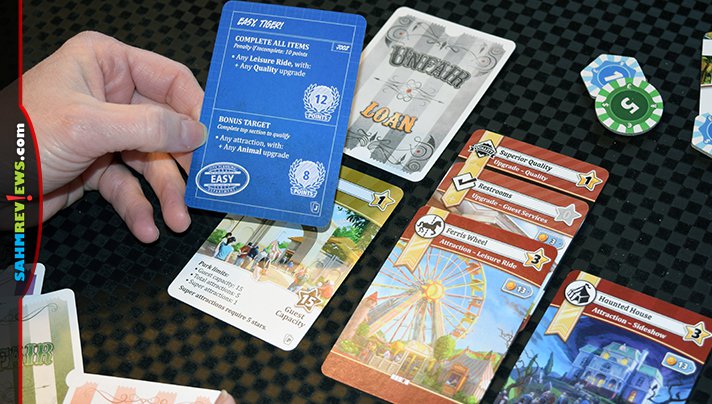 After a cleanup phase, the starting player shifts and the process repeats. At the end of the game, there are a few ways to earn points but the bulk of the points come from the size of your attractions. One of the other major ways to earn points is to collect Blueprint cards throughout the game. These cards offer end-game objectives to meet and award points as noted on each card. Once again, quality is key… not quantity. If you fail to meet the basic requirements on a Blueprint card once the game is over, not only do you NOT earn the points, but you actually LOSE points!

Unfair looks like it has a lot going on with so many piles of cards, but I assure you it’s not overwhelming to learn. The game varies in length based on the number of players (about 25 minutes per person). It’s recommended for ages 14+, but with an explanation of the rules, we could see younger players enjoying Unfair as well.

Let’s start by explaining what ABDW stands for because that pretty much sums up the expansion completely. It’s Alien, B-Movie, Dinosaur, Western. Inside this box you’ll find these additional themed packs, markers, tokens and additional cards that you’ll use to diversify the base game. Aside from that, Unfair’s ABDW expansion clarifies some rules while offering a few new cards. If you enjoy playing Unfair but are looking to switch things up, this is an easier solution than trying to find a fresh batch of friends to play with. 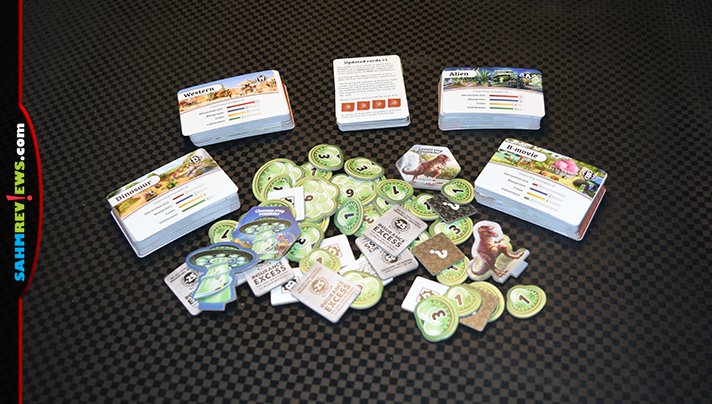 These games show the diversity of Good Games Publishing. You can play a quick game for two, a card game for a small group or a board game that can last about an hour or so. If you’re looking to add these to your game collection then we encourage you to check with your local game retailer. While you can pick up a copy of Unfair on Amazon, the others aren’t available there yet.

Which title from Good Games Publishing would you play first?