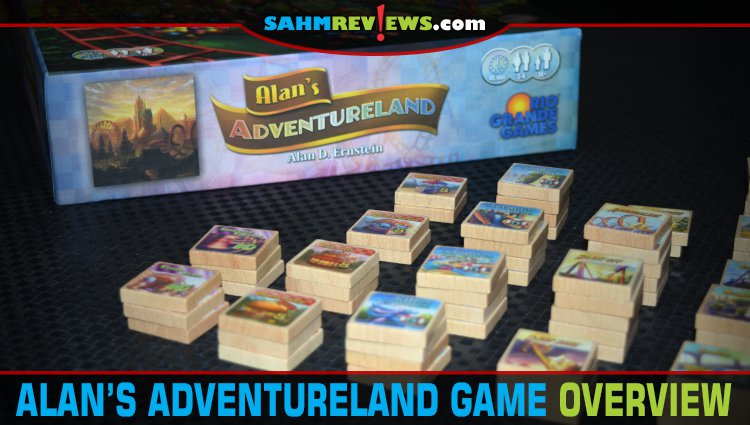 Normally I might say it’s THAT time of year when families start planning family bonding activities like summer vacations and day trips to local amusement parks. But, you know, world shutdown means things aren’t exactly normal. The girls were looking forward to their band trip to Disney last year, but it was cancelled the day before they were supposed to leave. Aside from being able to hang out with their friends, I think they were genuinely excited about going on new rides and roller coasters. I had been able to get Madison to ride some coasters like the Rock ‘n’ Roller coaster at Disney, but she was skeptical about many and Kennedy refused almost all of the big ones. I can’t complain though because they are trying them out now that they are older, which means there’s still hope for them. Cince we aren’t able to actually visit these fun places, we’ve had to get our fill through amusement park-themed board games like Tiny Park, Meeple Land and Unfair. We  recently added a new one to the mix: Alan’s Adventureland from Rio Grande Games. 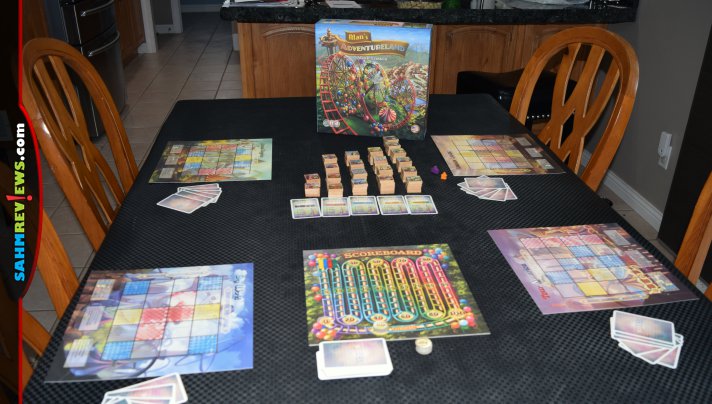 While you may want to just head off to the park and take in the entertainment, that’s not exactly how it works. Alan’s Adventureland is actually a city-building game where players are responsible for one of for neighborhoods of a new theme park. Each turn represents a week and at the end of each month, bonuses are awarded for meeting preferences. At the beginning of the game, select whether you’ll play which variant you want to incorporate into the game then set up accordingly. Place the scoring track near the center of the table. Sort the attraction tiles with the highest values on the bottom and set the stacks alongside the scoring track. Give each person a player mat, select a dealer and give them the Start and First Player markers. Shuffle the deck of ride cards then deal six face-down to each player. To begin the game, each player selects one of the six ride cards and places it face up next to their player mat then takes the matching attraction tile from the pool. (If it’s a four-player game, this action is done a second time.) 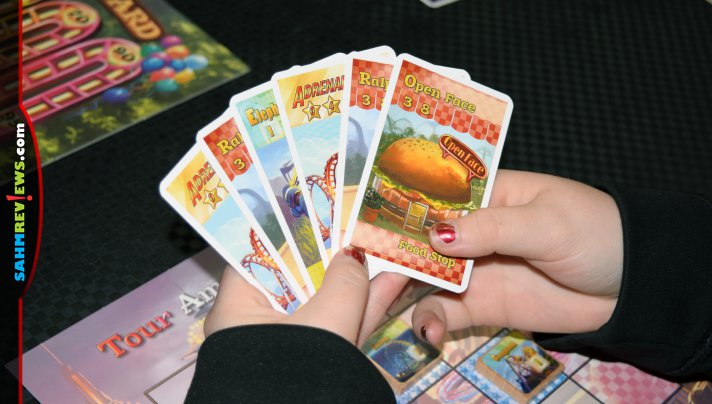 Each round consists of a series of steps. Deal ride cards, draw, play, build then reset. For the first phase, the dealer places two cards per player, face up, in the center of the table. Each player then takes turns selecting one and adding it to their hand then reversing the order to select a second card. 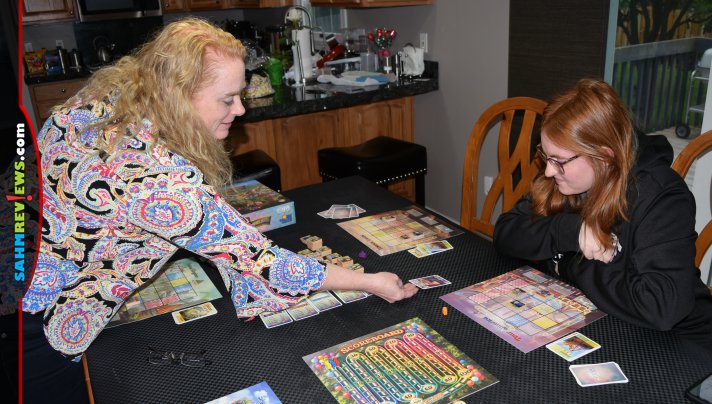 Beginning with the first player, everyone takes turn selecting a card from their hand and playing it face up in an empty space between two other players. These cards represent the types of attractions those players are encouraged to build. 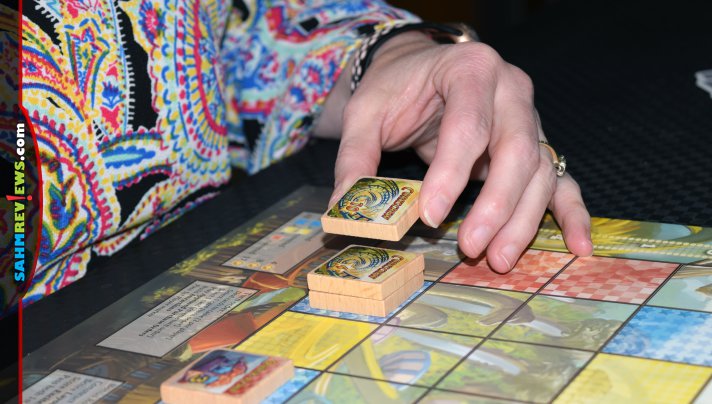 Each player then must select one ride card from their hand and place it on their personal discard piles. They may select any card from their hand, but they’ll incur a penalty if it doesn’t match one of the two approved ride cards. The amount of victory points the player loses depends on whether or not it matches a ride card elsewhere on the table. The player then selects the matching attraction tile from the center of the table and adds it to their player mat. New attraction types are played in a new space on the mat. If the attraction already exists in that player’s park then the new tile is placed on top of the prior, representing an improvement. 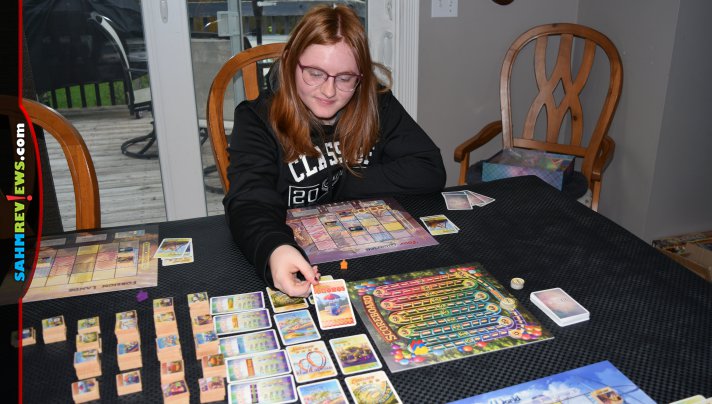 After all players have finished building, the dealer picks up ride recommendations from between each player, shuffles them then returns them to the bottom of the draw deck. First player passes to the person on the left and the process begins again until all players have been given that opportunity. At that point, it’s time for a bonus round. Each player selects one card from his hand, adds the corresponding tile to their mat then scores their personal layout bonus. They’ll also score the excitement level which is determined by the number shown on the top of each tile.

Upon completion of four bonus rounds, construction is completed and it’s time for final scoring. Players score the parking lot view (rows), main entrance view (columns) and theme then whomever has the highest score is the winner. It’s worth noting that the box indicates this game is for players 14+, but Alan’s Adventureland is pretty straightforward with the game play. With proper instruction, younger players should be able to play as well. If you’re ready to add Alan’s Adventureland to your game shelf, look for it on Amazon or check with your local game store for availability. Visit Rio Grande Games on Amazon for a variety of other games. For the latest news and details about upcoming releases, visit their website or connect with them on social media (Facebook, Twitter).

What types of attractions entice you to visit an amusement park?