Another common theme of games in our collection are those that have you pretending to be an artist of some type. Or maybe a connoisseur of fine works. Or even a trader of masterpieces vying to make the most money. There’s no lack of options if you’re looking for an art-themed game. In fact, just last month we were playing Atelier and trying to mix our pigments to paint a painting.

What most of these games don’t do is explain how you suddenly gained all this artistic ability. I don’t know about you, but I struggle with stick figures. There’s no way I could reproduce a portrait of a bowl of fruit. It’s nice to imagine that I could actually recreate one of the masterpieces. However, this would cause me to classify those games as “fantasy”. I would need a TON of lessons before I would even attempt one!

That’s the difference we discovered while recently playing iello‘s Kanagawa. This is a game that does have you creating your own works of art, but in order to do so you must first go through training. Set in 1840’s Tokyo, you are a student disciple of Master Hokusai’s newly-opened painting school. You will follow his teachings to paint your preferred subjects and expand your own studio! 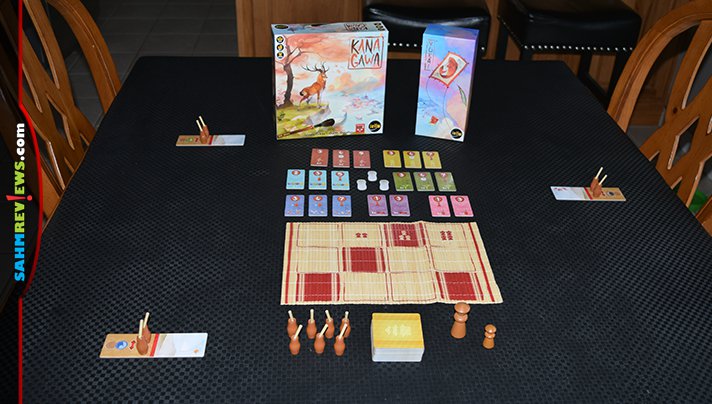 Up to four players each begin the game with a randomly distributed starting tile and two Brush pawns. The bamboo School Board (sushi mat?) is placed in the center of the play area. Diploma tiles are organized by color and value and laid out face-up next to the board. Colored Lesson cards are shuffled together and also set next to the mat, forming a draw deck. 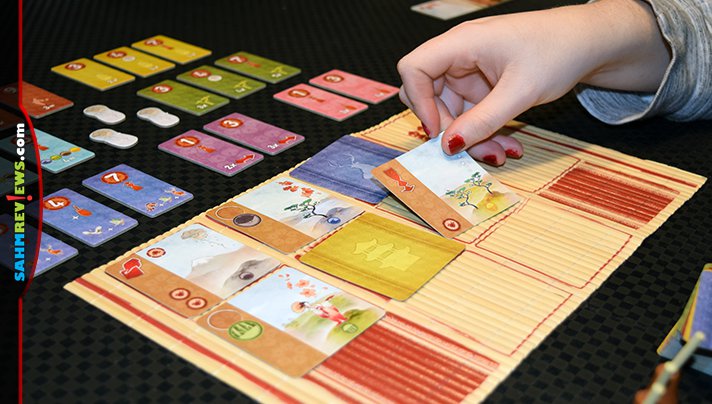 The first player of a round will “follow the teachings of the Master” by dealing out a number of Kanagawa Lesson cards equal to the number of players and placing them either face-up or face-down on the board, matching the printed area. Beginning with the start player and moving clockwise, all players will take one action out of a possible two.

A player may decide to “broaden their knowledge”, meaning they will pass their turn in hopes of gaining extra knowledge later in the turn. The risk is other players may take the card you want, leaving you with something worthless to you. However, the reward is you will receive two or three cards in return!

Instead, a person may “put into practice” the lessons they have already learned. This signifies choosing a column of Lesson cards from the School Board. Take all of the cards in any one column (1-3 cards) and decide how to play them. With the Lesson cards you just received, you may elect to play them to your studio or expand the print you are creating. 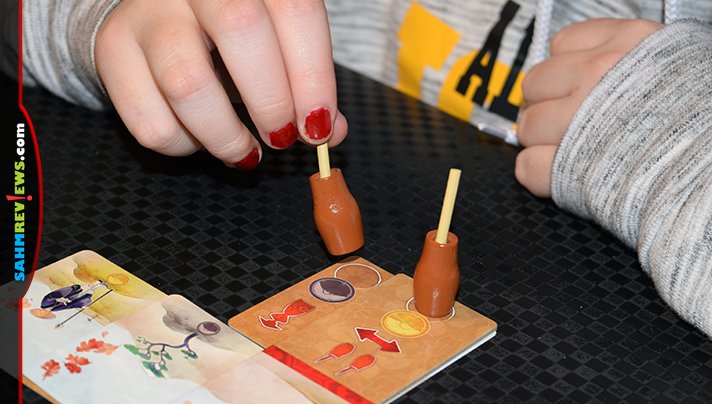 To “improve your studio”, turn the card 180° and tuck it under the card or tile on the left. This adds to your studio and the specialties (types) of drawings you can create. Most cards also contain an effect printed on it, which takes place either immediately or awards you with abilities you can use once per round. This may give you additional brushes, allow you to move brushes or award you an assistant that will make you first player during the next round. 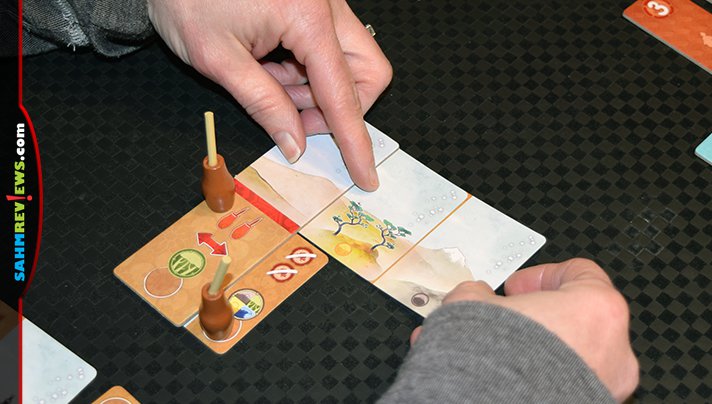 To add a new section to your print in Kanagawa, you must be able to match the combinations of brush and landscape on the card. As long as you have a brush upon the matching symbol to the card you wish to play, you may add it to your print by again tucking it under the card or tile on its left. Each icon on your studio cards may only have one brush on it at a time and it may only be used once per turn, even if you were to move a different brush onto it. 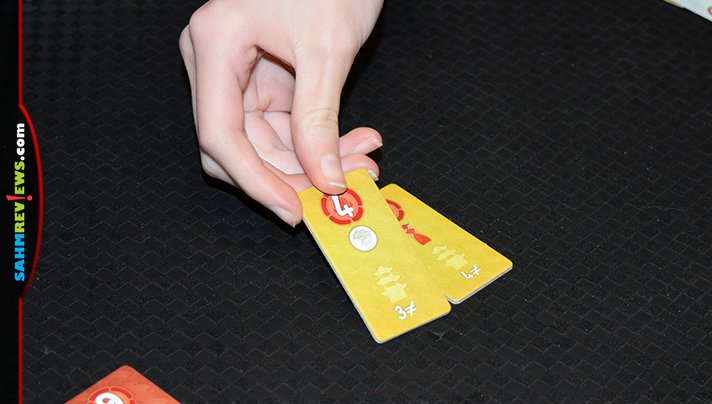 The Diplomas on the table have various goals for you to meet with your print. As soon as your print meets or exceeds one of these requirements, you must immediately make a decision on whether or not to take the Diploma. If you take it, move it from the center of the table into your personal area. You cannot ever have more than one Diploma of the same color in Kanagawa, so you may elect to pass on the lower-valued one to try and obtain a better example. Once you decide to pass on a Diploma, you may not go back later and collect it. Some Diplomas award the player with a Storm token. These tokens may be placed over the season area of the Lesson cards in the print at the end of the game to change the original season into a season of your choice.

After all players have taken one turn, if there are any players left in the round because they passed previously, new cards are added to the next row under the remaining cards on the School Board. Only the remaining players will proceed with another turn, selecting a column of cards or passing once again. If there are three cards in a column, the Board is full and you must choose one of them.

A round of Kanagawa ends when all players have taken Lesson Cards and resolved them. Whoever has the Assistant pawn takes the Grand Master pawn and becomes the first player for the next round. Subsequent rounds are played in the exact same manner until the last Lesson card from the deck is dealt to the School Board. This triggers the end of the game and means it is possible that not all players will receive cards on their turn. The round is finished before moving on to final scoring.

If a player is able to place at least eleven cards in their print, this also will trigger the game’s end. Final scores are calculated with all players receiving a point for each Lesson card in their print (including the starting tile), an additional point per Lesson card in the longest sequence of identical Seasons, a point for any bonus icons on Lesson cards in either the studio or print (some have negative points!), points from completed Diploma tiles and two points to whomever has the Grand Master pawn at the end of the game. The player with the highest overall total wins Kanagawa!

Last year iello released an official expansion to Kanagawa called Yokai. This inexpensive add-on introduces Yokai spirits to the game along with additional Lesson card types and associated Diplomas. When playing with the expansion, you will choose two Lesson card colors from the original game and two from the expansion (and obviously only use the corresponding Diploma tiles). 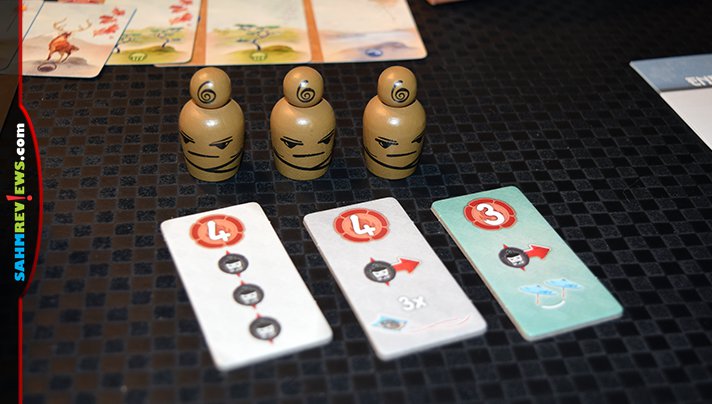 When you pick up a Lesson card from the School Board that has a Yokai symbol, you must take one of the three Yokai tokens and place it in front of you. If you manage to collect all three, you may claim the matching Diploma tile! This is yours to keep even if someone else later has all of the Yokai. At the end of the game you do not want to own them as they will be worth negative points depending on how many you have in your possession!

You can find copies of this highly-rated game on Amazon or at your favorite local game store. Make sure you spring for the inexpensive expansion while you’re at it! Iello is one of the few companies to always let you know exactly what they have coming down the pipeline, so check out their “Coming Soon” section of their website. If you’d like to try your hand at creating a masterful print, enter to win a copy of both the base game of Kanagawa and the Yokai expansion below!