While Scott is engrossed in all kinds of nature-themed games like Herbaceous: Sprouts and Songbirds, I’m focusing my interest on how many polyomino games there are. Copenhagen, Cottage Garden and Scarabya are three that I’ve already shared with you, each with very different themes and mechanics. While they all involve the familiar Tetris-shaped pieces, one has you building up from the bottom of a building, another allows you start in the middle and work outward and the third lets you randomly plant throughout two garden areas simultaneously. None offered the feeling of anxiety reminiscent of the original Tetris game.

This latest addition to the polyomino game train may fill a bit of that nostalgic gap. Unlike the others, in Arraial from Pandasaurus Games, you’re replicating the dropping of pieces. Not literally dropping pieces, but moving them visually from the top portion of your play area to the bottom. I’m starting to get ahead of myself so let’s back up to the basics. Arraial (pronounced uh-high-ole) is about a Portuguese street festival. You’ll be drafting pieces into your personal play area to represent the people attending your activities. The more you’re able to entice, the better because that’s how you earn points to win the game. 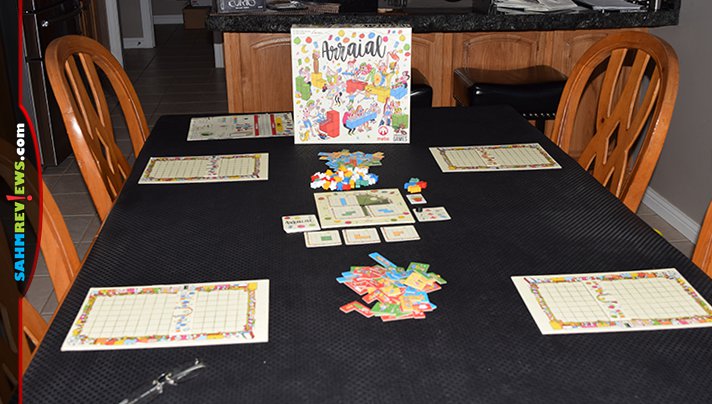 Each player takes a player board and places it vertically in front of them. You’ll also grab one entrance bar and place it in the designated space on your board based on the number of players. This signifies the entrance to your festival. The Central Board (aka the Octagon) is placed in the middle of the table, oriented to the players as noted in the instructions. Festival Tiles are placed in piles within reach of the players as are the individual visitor tokens and Couples tokens. Shuffle the Festival Cards then randomly align three on the board and place three in a queue alongside the board. The Round Card with marker on Round 1 is set where all players can see it as well. 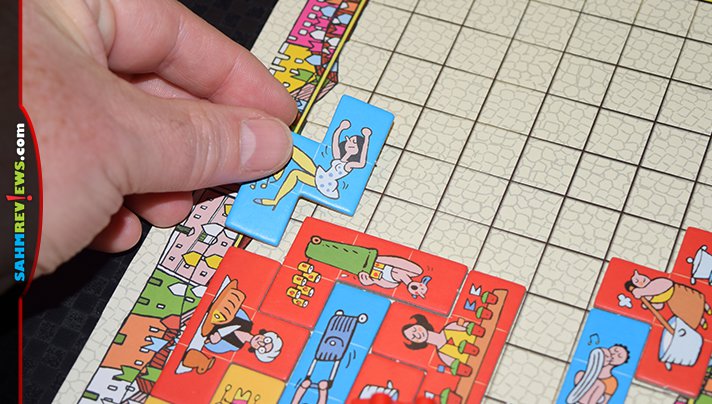 On your turn, you’ll have three action points to spend. It costs one action point to rotate the Octagon one space which will change the orientation of the pieces. While you can opt to spend one or two on rotating, at some point during your turn you will have to spend at least one of those points to select a Festival Card and place the associated Festival Tile. If the alignment is good and the shapes work, you could use two (or even all three) action points to draft tiles! On the other hand, you may decide to strategically rotate the Octagon so the orientation of the cards isn’t beneficial for the next player. 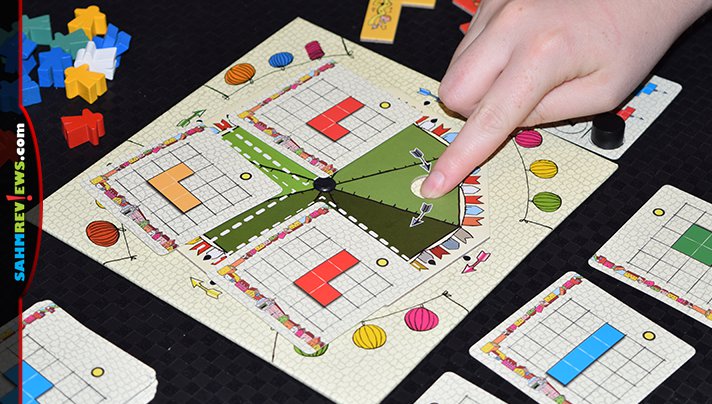 You may be wondering why you would need to spend action points to rotate the board. That’s because unlike a game of Tetris, you don’t get to spin the orientation of the tiles. You’re stuck with whatever direction they are when you select the card from the Octagon. You can slide the tiles sideways as needed to fit under an overhang, but only if there was room for the piece to maneuver into that space in the first place. 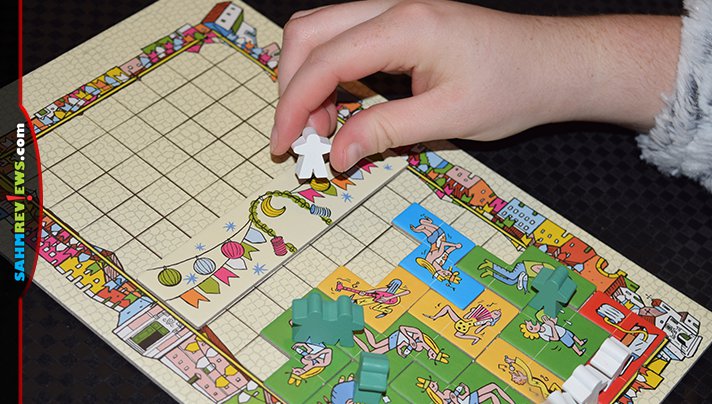 At the end of your turn, you’ll refill the empty spaces on the Octagon with the cards in the face-up row. Then you’ll reveal new cards that will be used in future turns. This process will continue as long as the Octagon is full at the beginning of someone’s turn. Arraial takes place over three rounds with each ending when the stack of Festival Cards is depleted. After the first and second rounds, players relocate their Entrance Bar to reduce the space available while at the end of the third round, the game ends and scoring takes place. 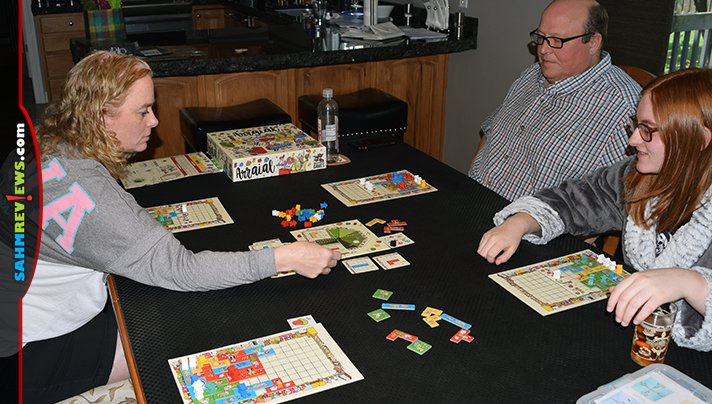 As I mentioned previously, the only way to score is to entice people to your event. Any time you form a group with two or more adjacent tiles of the same color, you earn an individual visitor that matches that color. Each one is worth one point at the end of the game. 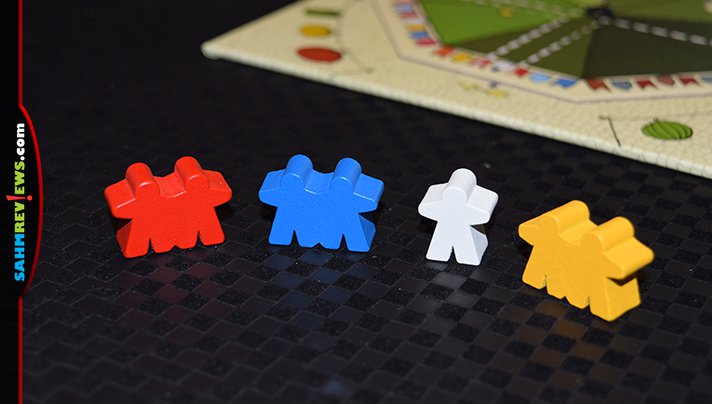 You can continue to grow the size of the group but will not earn additional individuals. Why would you do that if you don’t earn more people? Simple: The player who has the largest of each color of group earns the the Couples token which is worth two points at the end of the game. These tokens will continue to move between the players throughout the game. In addition, each time you complete a row, you’ll raise your entrance bar one row AND collect a bonus visitor. At the end of each round, any bonus tokens hanging out at the entrance will join the party. 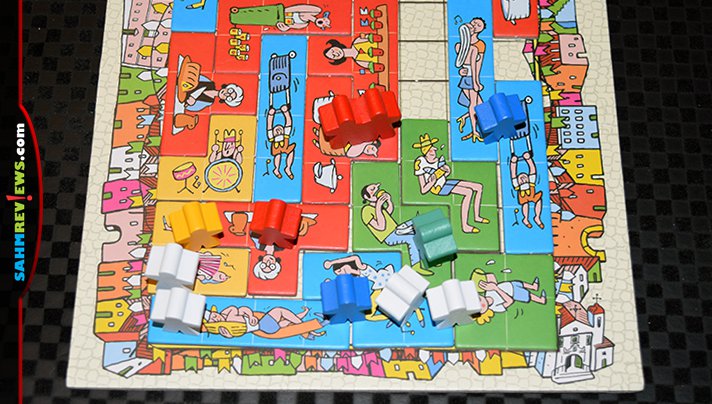 However, if you run out of space and are unable to place the required number of tiles on your turn or if it overlaps your tiles during the end-of-round resizing, you’ll need to remove your entrance tile and all associated bonus visitors leave along with it. When there aren’t enough Festival Cards to fill the Octagon in the third round, the game ends. Players calculate their scores and the one with the most total visitors can claim to be the best festival organizer.

With the ability to play up to four people as well as a solo option, Arraial is a different variation of game that uses this type of pieces. The Tetris-like nature of how the pieces enter the board might make it more inviting to players unfamiliar with this type of game. It’s best if played by individuals of the same skill level as there’s definitely strategy required when deciding which cards to make available for opponents. If you’re feeling festive and want to give Arraial a shot, pick up a copy of Arraial on Amazon or direct from Pandasaurus Games. Drop in on their social channels (Facebook and Twitter) to see what festivals and events they’ll be attending!

When was the last time you attended a street festival?