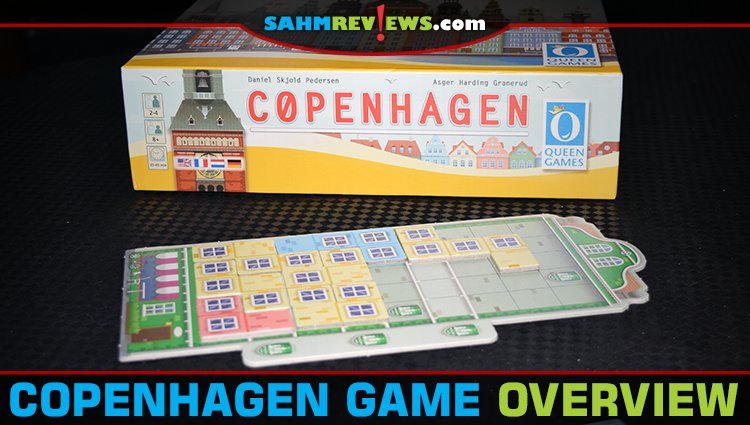 As you know, we recently spent a week in Ohio for Origins Game Fair. When attending a convention like C2E2, Gen Con or Comic-Con, you can do things at your own leisure and on your own schedule. However, when attending professionally – in our case as media – schedules are much more stringent. I schedule meetings with exhibitors every half hour and take 10,000 steps playing Pac-Man around the hall in an effort to connect with as many publishers as possible. But time is my biggest restriction so I cannot see all-of-the-everythings around the show. A half hour isn’t enough time to get all the details let alone actually play games. That’s why I was incredibly grateful that Queen Games coordinated a media night and set aside a couple hours before the show officially opened for us to check out some of their new titles. The event was so engaging that we stayed well after the designated time frame set aside by their staff! Copenhagen was one of the titles we played and definitely stood out in the sea of new games at Origins. Keep reading to find out why it stole my heart.

Puzzles are a fond reminder of my childhood when not only I spent a lot of time assembling jigsaw puzzles but also because that’s when I first learned the thrill of deciphering logic problems. Games that employ any aspect of these concepts jumps to the front of my list of games to play and the latest is Copenhagen. The concept of the game is that you’re modifying the facades of buildings in Nyhavn, a waterfront entertainment district in the capital of Denmark. You’ll select colorful brick and window tiles and carefully assemble them onto your building. One look at the building board and tiles and you’ll think those hours of investment in Tetris may pay off.

Up to four people can play Copenhagen board game but the setup is always the same. Place the harbor and the scoring tract in the center of the table within reach of all players. Each player selects a player color and takes the corresponding building and scoring token. Everyone takes the “Any cards” ability tile and places it next to their building while the remaining ability tiles are sorted by type and placed next to the scoring track. The facade (Tetris-looking) tiles are sorted by color and shape then placed within reach of all players as well. If you have less than a full compliment of players, you’ll need to remove some of the tiles from the stacks as noted in the instructions. The cards are shuffled and placed on the designated space on the harbor board, players take cards (quantity varies based on your turn order) and cards are flipped to fill the seven spots in the harbor. Now you’re ready to start building! 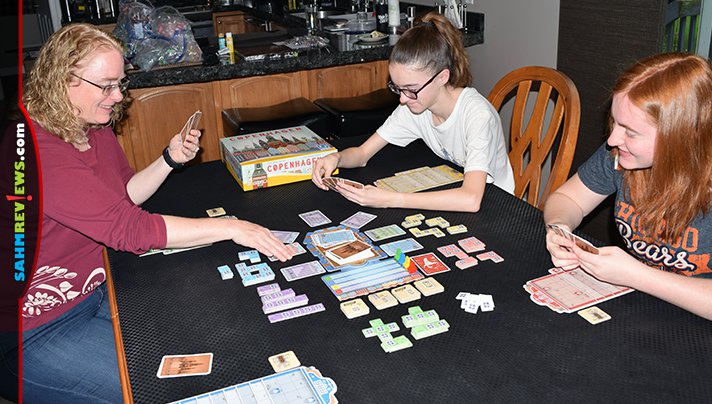 Before I begin to explain how to play the game, I want to point out that while it looks like an analog version of Tetris, it isn’t anything like that. You won’t be dropping tiles from the top of the building nor will you be limited in which comes next. However there are limitations and I’ll explain those shortly. While 4 of the facade colors sync with the player colors, you aren’t restricted to only selecting tiles in your building’s color.

On your turn, you’ll select 2 adjacent cards from the harbor or you’ll construct your facade by turning in cards you already own. As cards are selected, they are replenished from the draw deck prior to the next person’s turn.

There’s a hand limit of seven so if you end up with more cards than that, you need to immediately discard down to the requirement.  Each card represents the equivalent of a square in the facade piece. So to claim a yellow piece that is the combination of 4 bricks and windows, you’ll need to turn in four yellow cards on your turn. When you have enough to purchase the facade tile of your choice, you’ll turn in the related cards and select the related tile.

As I mentioned, there are some limitations to how you can build. Tiles need to be supported by the floor in some way. You either place them so one side is touching the bottom or you place them so at least one portion of the piece is supported by an existing part of the structure. 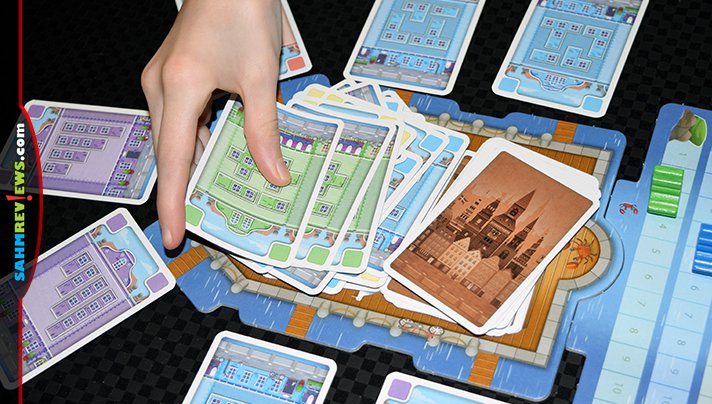 If you happen to place the tile so it’s touching at least one of the same color already in the structure, you may discard one less card of that color! In other words, you could grab that four-piece yellow tile I previously mentioned by only discarding three cards as long as you are placing it next to an existing yellow tile. 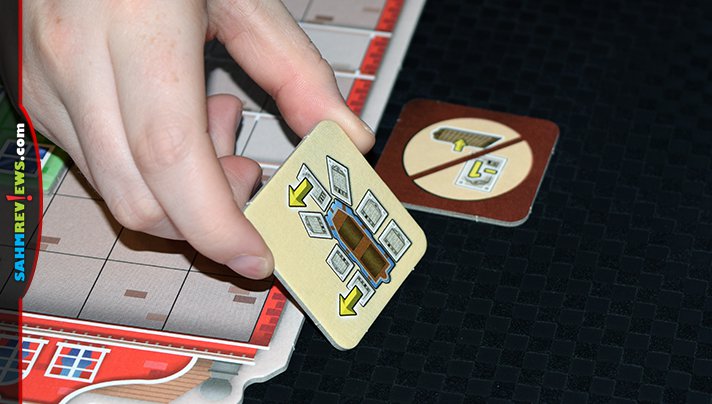 There are other ways to discount the tile costs or amend the normal rules. That’s by using the ability tiles. Each player starts with one that allows you to select two cards that are not adjacent. When you utilize that feature, you flip it over to show it’s been tapped. You can earn additional ability tiles by covering the red coat of arms building spaces on your board. In lieu of selecting another ability tile, you can refresh your existing tiles so you can use them again or you could select a single tile to fill in gaps in your facade. Some coat of arms bonuses are achieved for completing the rows they are next to. You are limited to one of each type of ability tile which include rule-breaking actions such as using one less card to purchase a tile, selecting a third card in addition to the two adjacent, converting the colors of one card into another while purchasing a tile and being able to select cards and construct on the same turn!

I’ve covered all the basic details, but we haven’t addressed scoring! If you complete a row, you earn one point. However, if you’re able to complete it using all windows, it’s much more desirable to prospective owners which makes it worth two points! Likewise, if you complete columns you’ll earn two or four points using the same scoring rules as with the rows. Scoring is done as earned and the games ends as soon as a player scores 12 or more points. There’s a secondary end of game trigger which involves the draw deck. When you’ve cycled through the deck once, the cards are shuffled and ten cards removed. The mermaid card is shuffled into those ten cards then placed on the bottom of the deck. As soon as the card is revealed, the game ends immediately. The player with the highest score when the game end is triggered is the winner.

The puzzle-ish nature of the game earned this game high marks from me while also giving it replay value. It’s releasing on July 18th, but if you’re ready to get your hands on a copy, you can pre-order Copenhagen on Amazon! Learn more about what Queen Games has in the pipeline by following them on Facebook and Twitter then enter to win a copy of the game here!