Continuing on our theme of what we’re calling serene games, this week we’ve been playing Herbaceous Sprouts by Pencil First Games. In case you don’t remember, we started with Wingspan and then moved on to Songbirds, very different games about a similar theme – ornithology.

While Herbaceous Sprouts extends our streak of nature-inspired games, it’s not a title about birds or even animals of any type. In this game you are challenged with populating a community garden with herb and flower sprouts of all kinds. We’ve always had a little garden in our backyard and enjoy fresh produce every summer. You might have also noticed from the title that dice are used! As you probably already know, that’s a perennial favorite of Nicole’s! 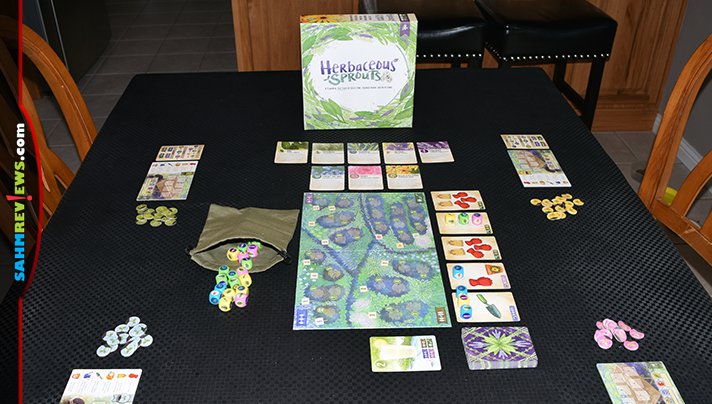 Instead of a personal garden, in Herbaceous Sprouts you are working with (and against) your opponents to fill in your neighborhood’s community garden. During setup, each player receives their own wheelbarrow card which can hold seven dice and fifteen sprout tokens in their player color. All of the dice are put into the included bag and two are drawn and given to each player to start the game. Tool Cards are also shuffled and set beside the colorful board. A number of cards equal to the number of players plus one are drawn and laid face-up in a line next to the deck. Any cards with empty die spaces are filled from the bag by the first player. 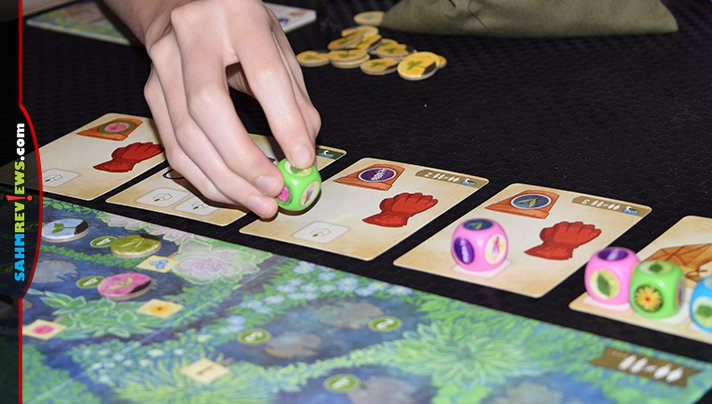 The Filling of the Tool Shed, as the drawing of Tool Cards is called, is the first part of every round. Once the round is ready to begin, the first player will take one of the Tool Cards and add its dice (if any) to their wheelbarrow, keeping the seven dice limit in mind. 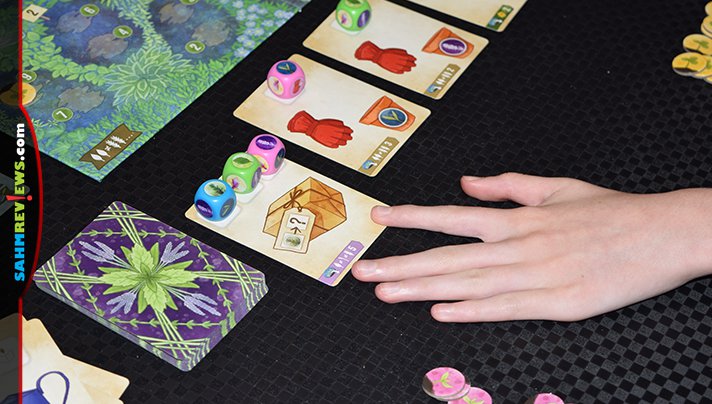 They may then perform any, all or none of the actions listed on the card. These range from rerolling dice, obtaining bonus seeds, turning a die’s face to exactly what you want, gaining additional dice or planting seeds/sprouts in the garden! I should mention the custom dice included in the game – there are four different colors of dice that have various faces on them. All dice have the five herbs represented, with the sixth face of each color being a special action or a flower seed. 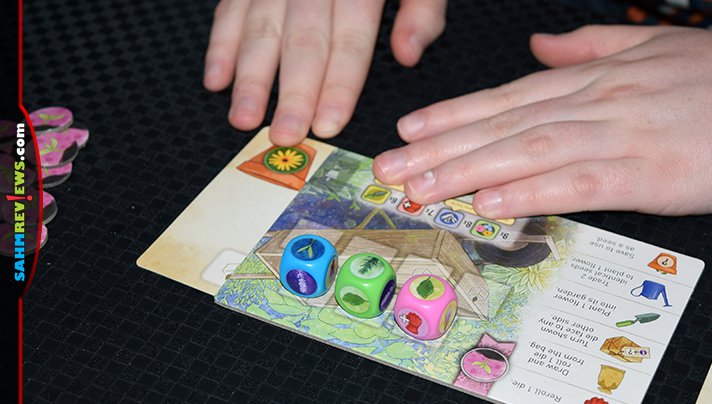 In order to take card actions, you must have the appropriate items in your wheelbarrow. For instance, to plant a flower you must have a flower seed! It would also seem obvious that to plant an herb you must have an herb seed, right? Not so fast! The herb gardens have specific requirements in order to be able to put your sprout there! 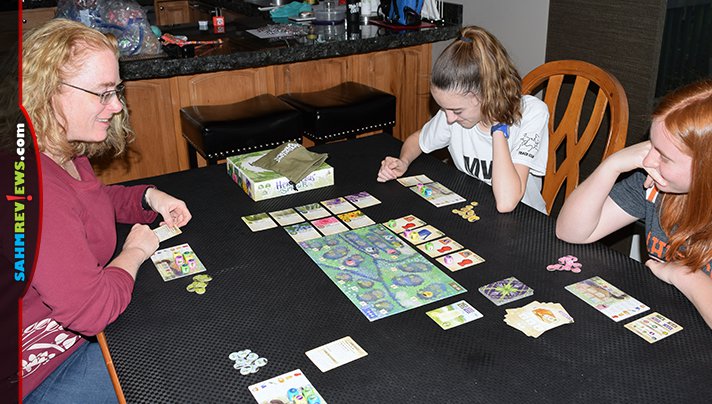 Each of the three herb gardens have different requirements and each plot can only be “won” by one player. To plant in the first garden, you must submit a number of matching dice (herb plants) in the number shown on the garden marker. It will take 3, 4, 5 or 6 identical herbs to plant in this section. The next area is similar, only you must have 2-5 different seeds, not identical. The final plot asks for pairs of seeds, either one, two or three different sets. The first player to plant in these sections chooses which plot in which to dig and will receive the listed points at the end of the game. 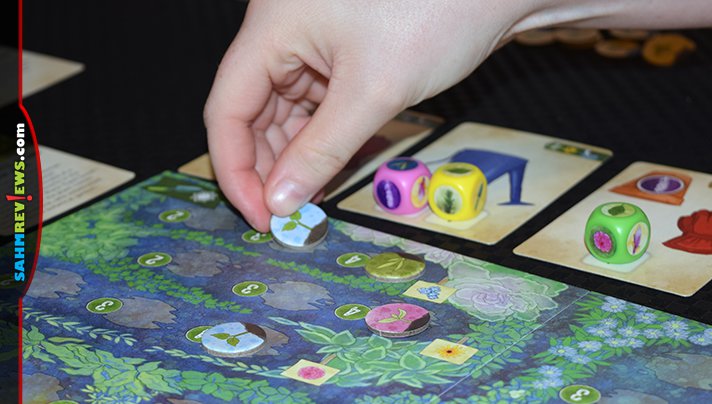 In order to plant in the flower garden, you need a flower seed and a trowel or a watering can and any two matching dice. These spaces are very limited, but the flower seeds are also harder to obtain since they only appear on some dice. One additional bonus, the first player to plant a sprout in all four of the gardens takes the Lemonade Card as a reward for their hard work and will be awarded an additional two points at the end of the game! 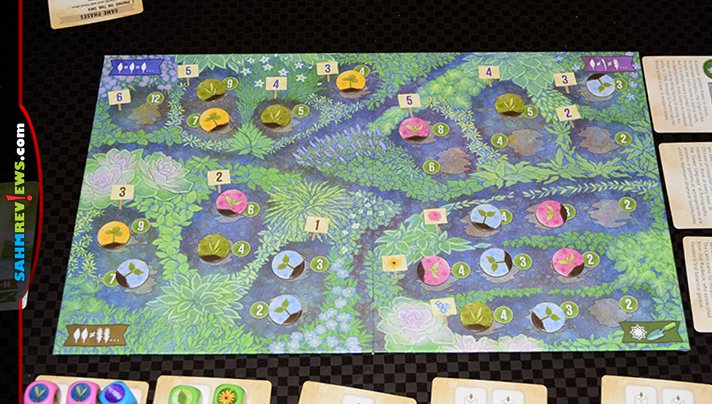 Rounds consist of one turn each, with the unused Tool Card being discarded and new ones dealt for the next round. After eight rounds, all of the cards will be used and the game of Herbaceous Sprouts ends. Players total up their points for sprouts in the garden and add bonuses for dice left over and not used. The holder of the Lemonade Card takes their two points and the person with the highest overall total wins Herbaceous Sprouts and is now the Head Gardener!

Herbaceous Sprouts is such a great follow-up to the wonderful card game, Herbaceous. The introduction of dice and a bit of area control means we’ll probably end up playing this new version more often and fall back on Herbaceous for travel or for a much quicker game. You can’t go wrong with either choice! Find your copy of Herbaceous Sprouts on Amazon for well under the $40 MSRP or at your favorite local game store.

Make sure you are following Pencil First Games on Facebook or Twitter to find out more about their next release, One Hundred Torii, which will come to life thanks to a successful Kickstarter campaign earlier this year. Expect to see it hitting store shelves sometime next Spring and hopefully we’ll be able to find a copy to present here on SahmReviews!

Have you ever contributed to a community garden?