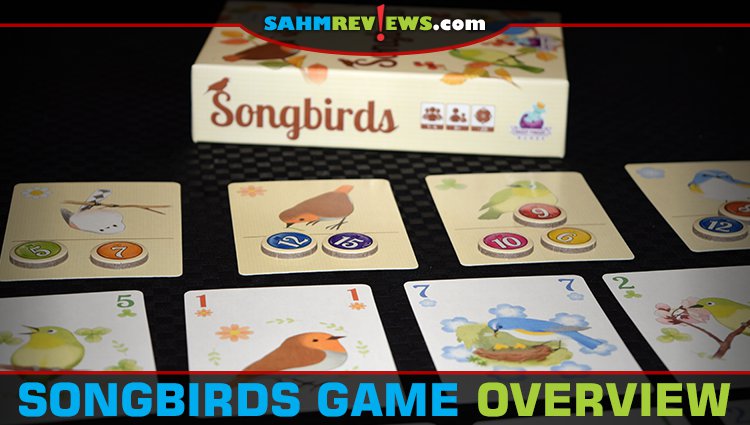 We love trends. Especially when they reflect something we prefer. In the board game world there have been a number of trends recently. A few years ago you couldn’t turn your head without seeing another new zombie game. Train-themed games have always been popular and will probably continue to be for a long time. Even the steampunk style became popular again with the issue of games like Dastardly Dirigibles, Steampunk Rally and Rivet Wars.

As of late we’ve noticed a wonderful trend in what we’re calling “serene games”. These are approachable games with a theme usually set in nature. For example, we recently highlighted Wingspan, one of the hottest games of 2019. It’s a variation on an engine-building game set in the science of ornithology. At first you might not think the study of birds would be a great theme for a board game, but once you play it, you’ll understand how the tiny details of things like the weight of the bird, its wingspan and behaviors all play into the strategical decisions you’ll make.

There’s a long list of recent games that fall into this “serene” style, but today we’re playing a brand new one by Daily Magic Games called Songbirds. It’s yet another example of how you can take a previously untapped subject and create an engaging and entertaining game out of it! 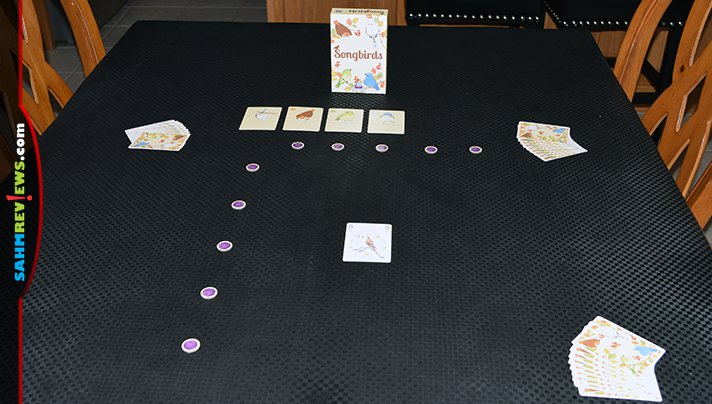 Songbirds is a quick card game advertised for one to four players, with three being the ideal number. Players are trying to score points by predicting which songbird type will sing the loudest. Inside the box you’ll find a custom deck of 28 songbird cards, 10 berry tokens and 4 berry holder cards. Additionally, two special cards, special berry tokens, worm tokens and additional score cards are included to accommodate rule variations for fewer or more players. For the purpose of this overview, these will not be used and put back into the box. 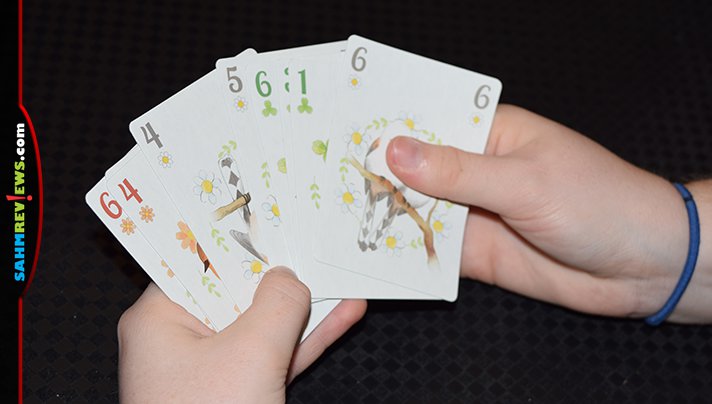 All players are working together to create a public tableau of songbird cards in the center of the play area. Set up the game by mixing the 10 berry tokens together and setting them out at the edge of five columns and rows, denoting a 25-card board to be built. One songbird card is dealt to the middle of this area to begin the game while every player receives the rest of the cards dealt out equally. The four berry holder cards are set next to the tableau within reach of all players. 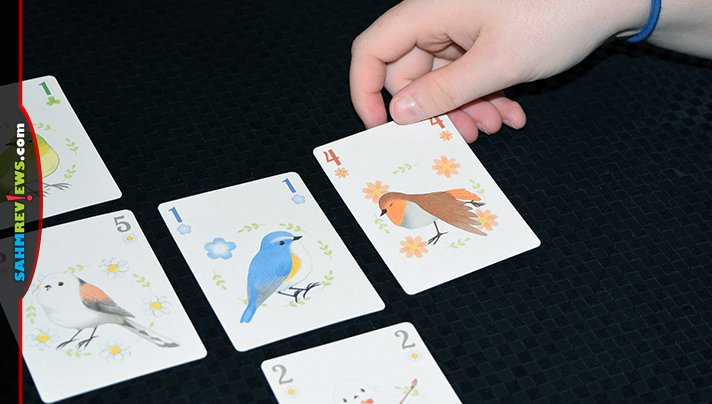 The songbird cards depict a specific songbird type and a number which represents their volume. Beginning with the first player and moving clockwise, all players take turns placing one card from their hand onto an open space in the forest (tableau). The newly-placed card must be adjacent to a previously-placed bird (not diagonally) and must lie within the 5×5 grid depicted by the berries. Each time a row or column is completely filled with five cards, it is immediately scored. 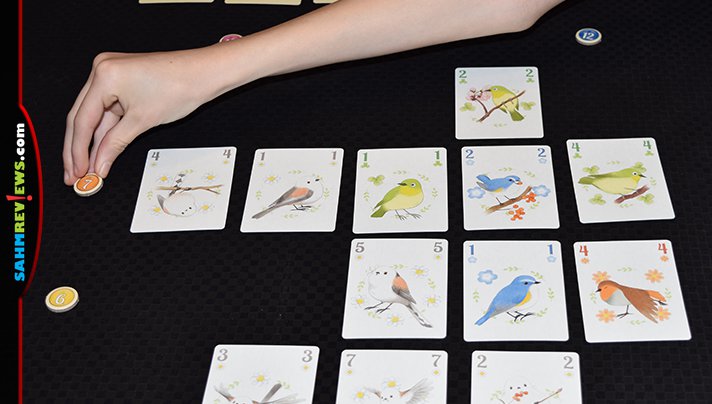 The five cards in the row/column are examined and summed by songbird type. The species with the highest volume total is awarded the berry, which is placed on the matching berry holder card. If there is a tie, neither type receives the berry as their voices cancel each other out. The next highest bird type then receives the berry. If all species present in the row or column are tied, no birds get the berry. The berry tokens have different values on them, ranging from 5 to 15 points! 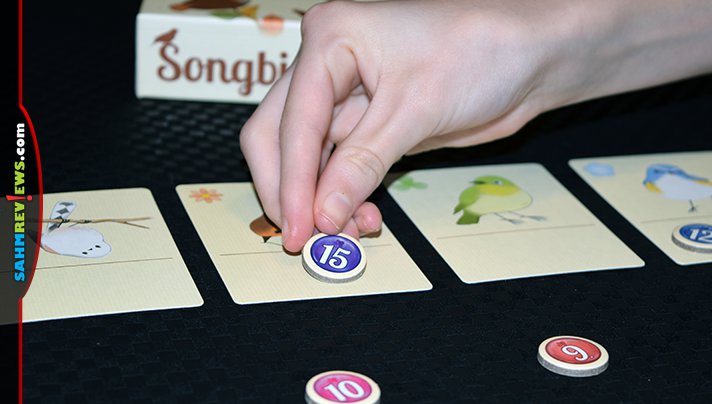 Players continue to take turns until the entire 25 card grid is full. At this point each player will have one card left in their hand, and this is the songbird they consider their favorite. Players score points for any berry tokens on the songbird matching their favorite and add points for the volume value of the last card in their hand. The person with the highest overall total wins Songbirds! 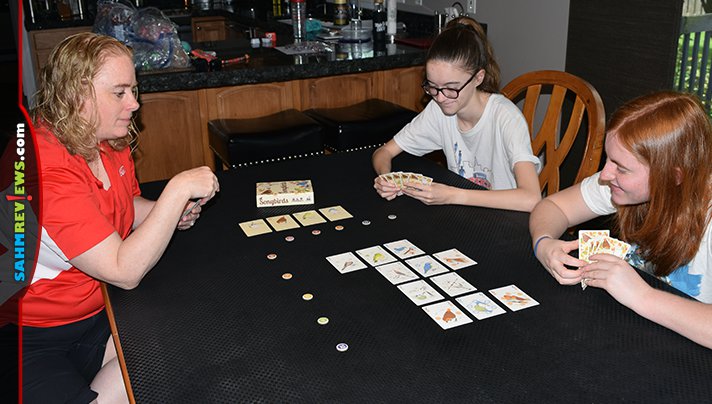 We found Songbirds to be a cute and unique twist on a traditional card game. At first you get the feeling that you’re working on filling the forest together as in a cooperative game. But you’ll soon realize that you want to favor the bird types that you have most of in your hand and will probably call your favorite. At that point, it’s a head-to-head match where winner takes all!

At around $20 on Amazon or at your favorite local game store, you’ll find Songbirds to be a good value and will get a lot of plays. Plenty of player interaction as you vie for dominance in a row or column, yet you still need to make sure you keep a favorite in your hand that will score for you! See what other titles Daily Magic Games is singing about by checking out their website or following them on Facebook or Twitter.

Have you been playing any bird-themed (or serene) games lately?