It’s that time of year when we see princesses and their princes showing up at restaurants before heading off to the annual ball. If you haven’t spotted them out in the wild, no doubt you’ve seen moms posting hundreds of photos of their high school children all dolled up. Prom. It’s a big day and a dream for most girls. Like so many others, an old high school friend of mine posted pictures of her daughter and date all dressed up in a dress, beautiful hair and lovely makeup. What was unusual is that it was the pair of steampunk boots that complimented her dress.  While it wasn’t the traditional high-heels you normal see, I loved it.

Steampunk has been trendy for quite a while but it continues to creep into modern pop culture with games like Rivet Wars by CMON, Dastardly Dirigibles from Fireside Games and Steampunk Rally from Roxley Game Laboratory. The first involves tanks that battle, the second is all about constructing airships and this third revolves around the idea of crafting vehicles for a rally race. To add a little flare, you get to act as your favorite scientist to see if you have what it takes to win the race. 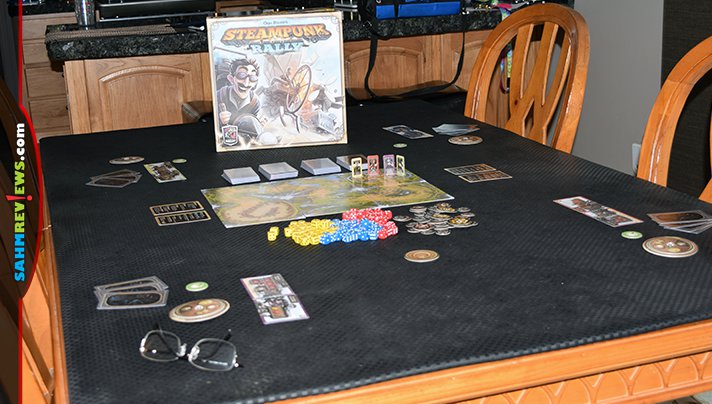 With a modular board, Steampunk Rally allows you to change your course from one game to the next. To begin the game, you’ll begin by selecting which one you want to implement. The track tiles are double-sided with one representing the Alps and the other the Hoverdrome. Each track will include a start, finish and end along with 3 of the 5 sections of middle track. Use these 8 pieces to craft your unique track for the outing. Place the cogs and dice along the side of the track to form a general supply. Sort the Boost and Machine Part cards into four piles based on their border color, shuffle and place along the board within reach of all players. Each player selects their favorite inventor then takes the related inventor cockpit, inventor machine part and inventor pawn. Place a light bulb token in your play area with the “on” facing up. Construct a vehicle by connecting the valve connections and place the damage gauge next to it. 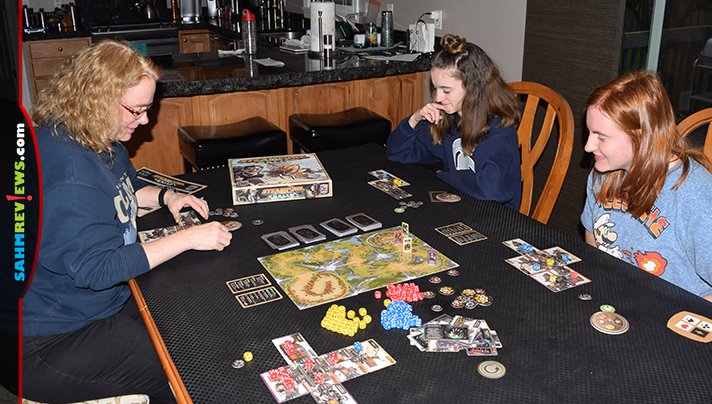 Up to 6 people can play Steampunk Rally and the player count definitely impacts the feel of the game. You’re acting as your favorite inventor, creating steam-punk engines and venturing on a multi-day race across the landscape. Each day is represented by a round that includes the following steps: Draft, Vent, Race and Damage. While you’re literally building a steampunk engine to race, the game mechanism is also an engine builder like Colony, Gizmos and Wingspan. Your engines are created with cards that display dice and the types of actions they offer. Yellow is electricity, blue is steam and red is heat. The Cogs are used to adjust the pip values on the dice and have a few other uses as well that we’ll talk about in a minute. 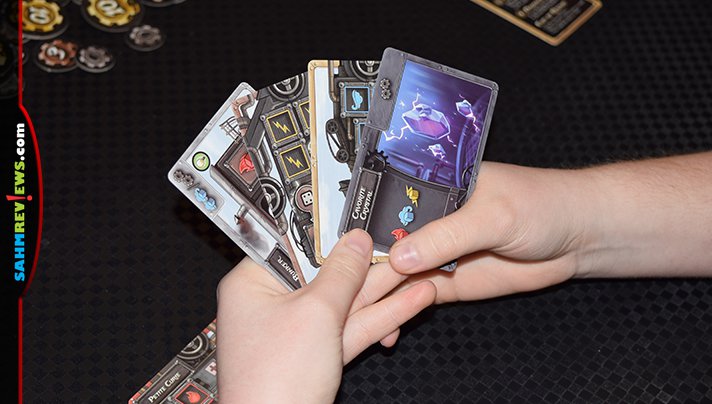 You’ll begin the day (round) by adding machine parts to your invention, gaining dice, cogs and Boost Cards. Remember that you’re a creative scientist; if you’re not happy with the vehicle you were racing yesterday, you can disassemble and reassemble it with new parts at the beginning of the new day. Begin the round by selecting a card from one of each of the four stacks of cards. Black border cards represent Boost Cards which offer a one-time bonus. You can save those to use at a future point in the game. The gold, silver and copper border cards are Machine Part Cards. They improve your invention and are used during the Race portion of the game. Gold border cards generation motion, propelling your invention forward through the race. Silver border cards generate dice which are used to power your invention. Copper border cards have four valve connections which provides you more flexibility when you’re trying to expand your invention. Alas, you cannot do it all so you’ll have to be selective! You’ll draft one of those cards then set the remaining aside. If it’s a Boost card, you’ll stash it for later use, but Machine Part cards offer a couple of options. If you choose to construct it, you’ll attach it to your vehicle using one of the available valve connections or rearranging parts to create a viable connection. As an alternative, you can trash a card to earn the components (either cogs or dice) noted in the upper right corner of the card. Once everyone has made their selection, the cards are resolved simultaneously. You know those leftover cards in your hand? Now you’ll pass them along to the person next to you. You’ll receive a fresh batch of rejected cards from your opponent and you’ll repeat the process from draft to resolution until all cards have been disbursed.

The venting phase is skipped the first round but comes into play beyond that. Basically, during the race phase you’ll be gearing up your engines by placing dice on the various components. The Vent phase allows you to spend Cogs to reduce the pips until you’re able to remove a die from the space. This frees it up to be re-engaged. Each Cog reduces two pips. Cash in one Cog to reduce one die or multiples to vent even more! 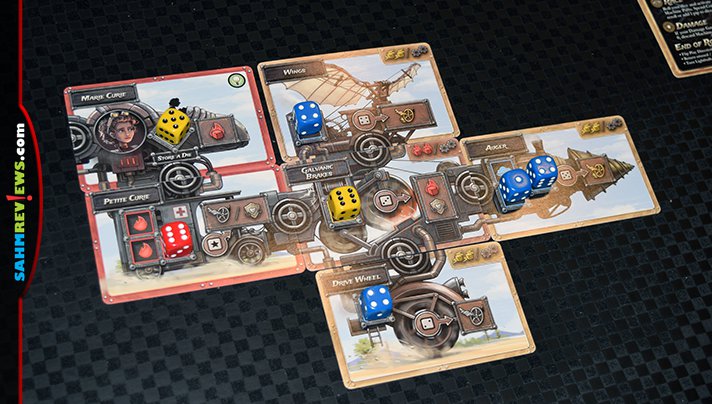 The next phase is the meat of the game. At the start of the Race Phase, you’ll roll all the dice you have in your pool. You don’t have to place them all at the same time but can place and resolve one at a time. As an example, you can place one that might allow you to move a space on the board. This is determined by taking the value of the die (or dice) you placed and dividing by the value on the converter part of the engine. A low roll might result in moving only one space while higher die counts may allow you to move multiple. 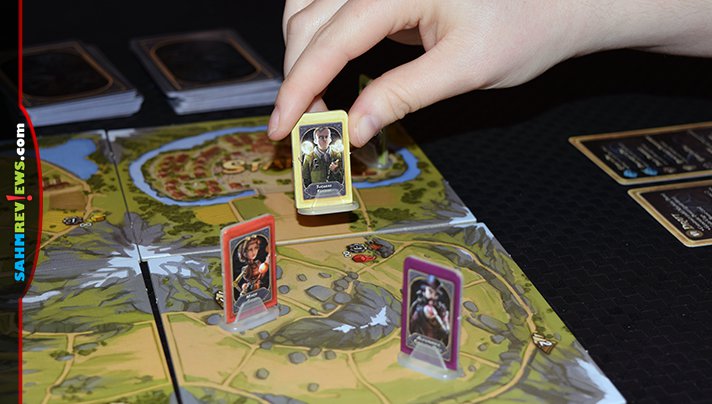 If those movements cause you to cross rough terrain, it immediately causes damage to your invention. You’ll adjust your shield wheel accordingly to reflect the damage. At that point, you may want to play a different die that helps generate another shield before you move forward on the track again or to get you out of a negative shield situation. At any point, you may play a Cog to adjust the pip value by one. When you are first getting familiar with the game, it’s best to take turns doing all these actions.

Remember all that rough terrain we talked about. It’s not good for your invention. You may have added shields along the way to help mitigate the damage, but if you didn’t then there are consequences! If your Damage Gauge is at 0 or above during the Damage Phase, you’ll leave it alone. However, if it’s lower than that you’ll need jettison portions of your Invention until you return your Damage Gauge to zero. Before beginning a new round, you’ll do a few maintenance items including returning unused dice (that you don’t have space to store) to the supply.

The only thing I didn’t address are the Boost Cards. Remember I said you stash them until you’re ready to put them into play? Unless otherwise restricted on the card, you can use them at any point during the game. Some create an effect that remains in play for the phase or round while others are a one time event. They’re a handy backup to get you out of a pinch or help push you over the line! 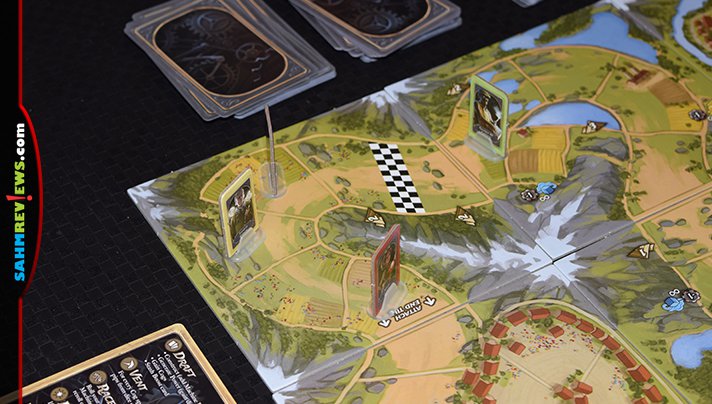 The end of the game is near when someone crosses the finish line. You’ll have one last round to blast past all your competitors! In other words, just because you trickle across the finish line doesn’t mean you’re declared the winner. The inventor who gets furthest past the line in that final round is!

You can race to your local game story to pick up a copy of this steampunk-themed engine-building game or you can pick Steampunk Rally on Amazon or direct from Roxley Game Laboratory. If you want to be in-the-know about other cool, thematic games from Roxley, follow them on Facebook and Twitter. With convention season just around the corner, keep an eye out for news!

Have you ever participated in any kind of auto race?