The other day Madison sent me a photo via text of her and a friend at school being twinsies. I was baffled by the image, not because of their matching sweatshirts, but because she was wearing something she didn’t own. Apparently he had ordered one online and the sizing was wrong so the company shipped a second and told him to keep the original. She was the lucky benefactor of a How to Train Your Dragon sweatshirt, given to her because the two of them geek out together over the franchise. Seeing her excitement consistently makes my heart melt because it brings back memories of her playing the How to Train Your Dragon video game all the way back in 2010. She was sooo little then!

It’s not that we’re fanatical about dragons, but it is fun to incorporate them into our game night. Whether it’s a board game with a mechanical dragon, a card game about pet dragons, or one where you’re trying to save the princess before the dragon knocks down the tower, there are plenty of options. Over the years, we’ve encountered several games that include some reference to dragons, but our latest addition to the collection is one that is reminiscent of How to Train Your Dragon. In Dragon Island from R&R Games, your goal is to gain fame and fortune by capturing and taming dragons.

You and up to 3 friends will take on the roles of wizards who are exploring an uncharted island. Unfortunately, it’s inhabited by dragons so not only are you attempting to capture and tame them, you’ll also be building structures and searching for treasure. I mean, really, don’t all dragons have hidden treasures nearby? To start a game, each player selects a color, takes the Wizard Start Tile, Wizard Screen, Dragon Pen Tile and Wizard Figure in the matching color. In addition, each player takes one of each color of Pet Dragon Card. Terrain Tiles are shuffled and added to the tile bag then a designated number are removed from the game depending on the number of players. Shuffle the Treasure Map Cards and place the deck face down off to the side of the play area. Place the Wizard’s Keep in the center of the table and create general supply piles of remaining components on the outskirts. You’ll be connecting tiles to the Wizard’s Keep so leave enough room to add several in each direction. Each player will begin the game with a random tile from the bag, and will draw two Treasure Map Cards and keep one. 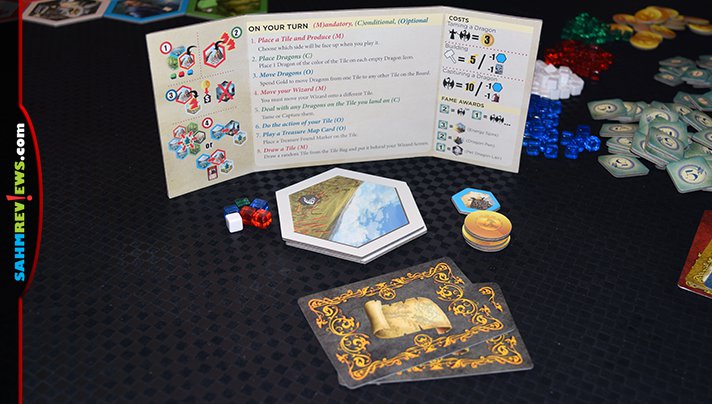 The idea of Dragon Island is to earn the most fame and fortune. This is done in a number of ways including capturing dragons, building (Dragon Pen, Energy Spire or Pet Dragon Lair) and playing a treasure map card. Actions you take may require the use of Active Energy which are the cubes you collect as you explore the island. They’re generated based on the tile you place at the beginning of each round as well as all the tiles that are attached to that. As an example, if you add a white tile to the board touching a red, blue and green tile then you’ll collect one cube of each white, red, blue and green. Yellow tiles produce gold instead of energy. These energy cubes and gold (along with tiles and anything else you collect during your adventures) are kept hidden behind your player screen. 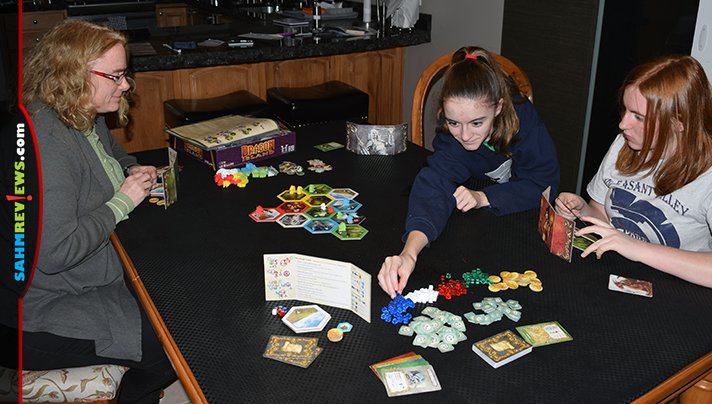 Each turn consists of 8 possible steps, 3 of which are mandatory, 3 that are optional and 2 that are conditional. First, you’ll place a tile and produce energy. Tiles are double sided so you’ll be able to select which side best aligns with your goals and provides you with the energy you’ll need moving forward. As I mentioned before, you’ll produce energy based on which tiles are connected to the one you’re placing. Placing a tile is one of the three mandatory actions each turn. After that, if any of the tiles on the board display dragon icons, you’ll place a dragon matching the tile color on that icon if there isn’t a dragon or building already there. Placing dragons is one of the two conditional actions. Now that there are dragons on the board, your next action to Move Dragons is optional. You may spend gold to move dragons around the board to either get them into places allowing you to capture or tame or to prevent your opponents from doing so. 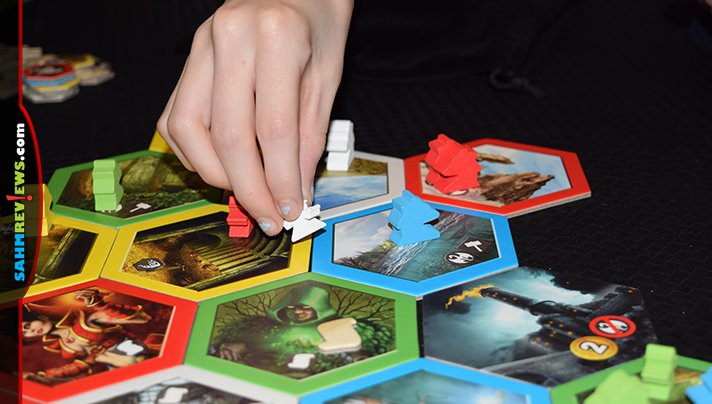 The second mandatory action is to move your wizard. The distance you move is one space in any direction or fly to a tile matching one of your Pet Dragons. Pet Dragons have benefits which vary based on their color, but all allow you to fly to a tile matching their color. As an alternative, you can teleport to the tower and move one space from there. 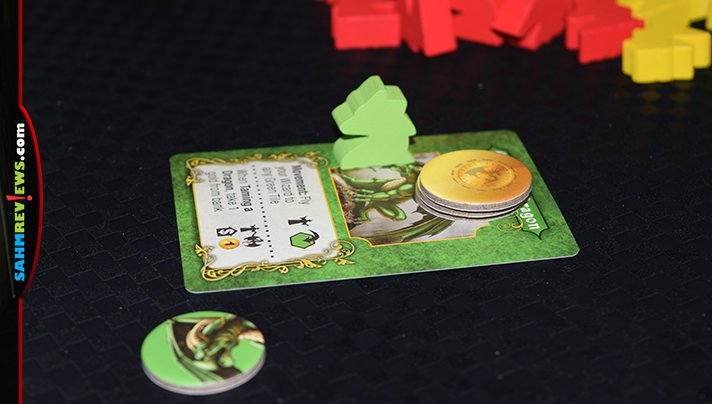 If you land on a space with a dragon, you will need to either tame the dragon or capture it. This is the second conditional action. You’ll either pay gold or energy depending on the whether you plan to tame or capture it. If there is only one dragon on the tile, you have the option to capture or tame it. If you capture it, you’ll earn fame, but if you tame it, you can make it your pet, thereby being able to use the special bonuses it offers. Dragons sure are magical, aren’t they? If there is more than one dragon on the tile or if you’ve already tamed a dragon of that color, your only option is to capture it. You’ll earn fame for doing so though!

If the tile you land on has an icon, you have the option of performing the action type (Build, Map, Telekinesis or Gold). A build icon allows you to build there as long as there aren’t any dragons present. You’ll earn fame for doing so and dragons will no longer spawn on that tile. Telekinesis is like producing energy, but instead of collecting for the tile you placed, you gain one energy cube and/or gold coin for each tile in one straight line from that tile. If you land on a tile with a map icon, you draw two Treasure Map cards and keep one.

As I said, I feel like dragons are synonymous with treasure and the next optional action is built on that idea. You may play a Treasure Map Card if you are on the space matching the border color of the card and have met the requirements on your card. Confirm that the map and tiles match and gain fame and gold as noted on the card. Once you do this, you’ll place a marker on the tile and no further treasures can be claimed there. You’ll start the game with one of these cards, but as I mentioned a minute ago, you can earn additional by landing on the tiles with a map icon.

The final action of your turn is to draw a new tile from the bag. While there are 8 total actions, seldom will you do all of those. Early in the game you’ll mostly only be doing the mandatory actions but as the game progresses, turns get longer as players maximize the optional actions whenever possible. But even with all that, it’s still only a 60 minute game. When the last tile is placed, that player completes their turn and the game is over. Fame is tabulated and the wizard with the most is declared the winner.

Whether you enjoy tile placement games, like dragons or simply enjoy a good treasure hunt, check out Dragon Island. It’s not a difficult hunt to find a copy on Amazon but you can also pick up a copy direct from R&R Games or ask your local game retailer for availability. Dragons not your thing? There are plenty of other game choices! You can be among the first to hear about new games on the horizon with R&R Games by visiting their website or following along with them on Facebook and Twitter.

Are you a fan of dragons?