When I think back to games we have played over the past couple of years and try to recall which ones got played the most, I would have to put Codenames high on the list. If you haven’t played, it’s a game between two teams who are trying to guess words given to them by their team’s clue-giver in fewer turns than the other team. The premise is surprisingly simple. But what made it such a hit for us and tens of thousands of others was the execution. Because you’re working as teams with strict rules about how clues can be given, a lot of conversation ensues about possible answers – sometimes from the other team trying to persuade you the wrong way!

This idea of two teams divided up into two parts is something we also saw in the recently released Shadows: Amsterdam by Asmodee. In it you are investigators at a local detective agency trying to collect three pieces of evidence and deliver them to your client. In order to be paid for your services, you must do so before the other team does! But the local police don’t want you around either for fear you’ll hinder their investigation, so you must avoid them at all costs! 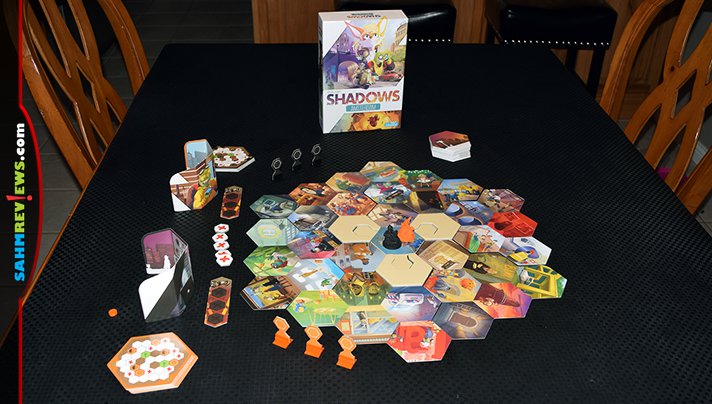 Each game of Shadows: Amsterdam is different thanks to how the board is set up. Six of the seven district tiles are randomly assembled around the starting tile into a hexagon. Four of the intel cards are drawn from the shuffled stack and placed in the three open spots, with the last one on the center starting tile. Both detective pieces are placed on this starting tile and each team assigns one person to be their Intelligence Officer (clue-giver). This person takes their team’s screen, all the map cards of their team’s color and a hand of ten intel cards. 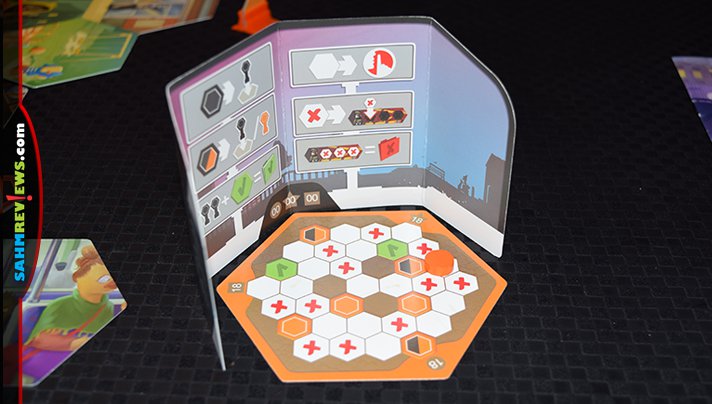 One of the Intelligence Officers draws a map card at random and the other searches through their pile to select the matching numbered one. They both place them behind their screens, making sure they are oriented in the same direction (it is best to have the two clue-givers sit side-by-side and the rest of their team across from them). 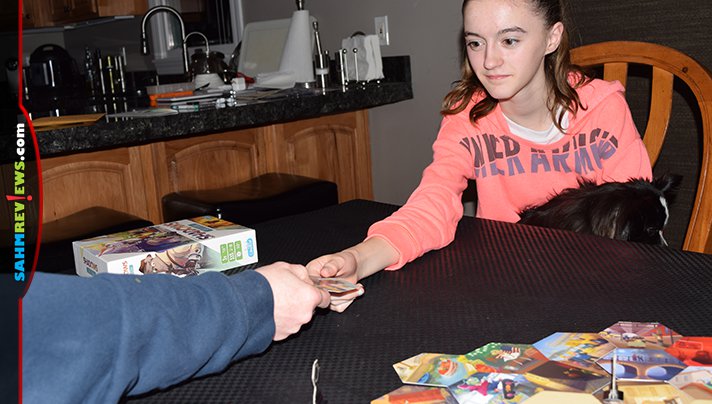 On the map card is a diagram of the board that was just constructed. Many of the hexes are labeled with symbols that denote the location of evidence that your team (or both teams) can find, the position of the client you must deliver said evidence to and the locations of local police who you must try to avoid. 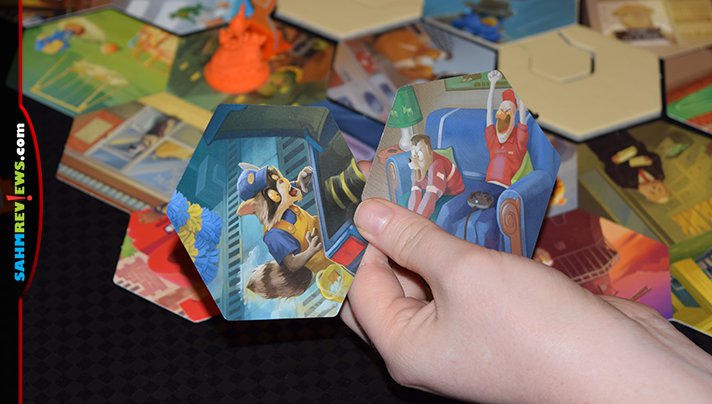 As the game begins, both Intelligence Officers must give clues to the rest of their team on where to move their detective. Here’s the catch – no words, expressions, body language, etc. can be used! The only way to communicate with your team is through pictures – in the form of the intel cards. If you’ve ever played Mysterium (by the same company), you’ll recognize this mechanic. If you want your team to move the detective one space, then you’ll select one card from the pool of ten and pass it to your teammates. You’re hoping to give them clues about which direction you want them to move by matching up features in the photos on both the card and board, similar colors, abstract details or whatever you think will have them choose the correct space. If you would like them to move two spaces, you can pass them two cards! 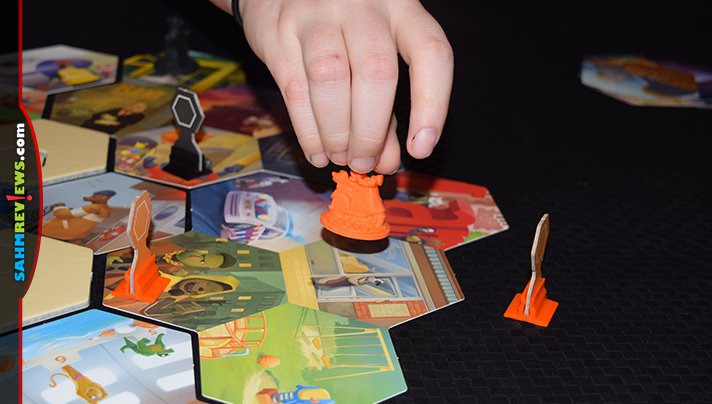 When your team of detectives agree on a movement after discussing your clues, they move the team’s detective figure onto the space they have chosen. Then that move is resolved. If they moved to a space that depicts nothing on your map card, do nothing and continue the game by giving them another clue. If they land on an evidence space, congratulate them and award them one evidence token, which is placed on their current space. If three evidence pieces have been collected by one team and they then land on a client space, that team wins the round immediately! 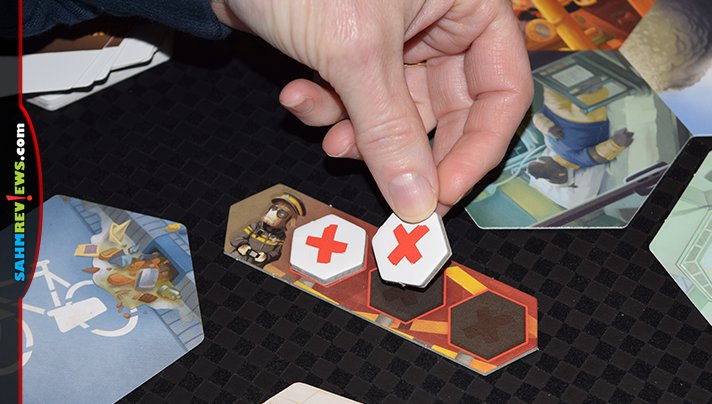 Landing on a police space forces the team to place a police token on the team’s police track. If a third token is collected, that team immediately loses the round to the other team. A round continues with movement, resolving the space and collecting evidence or police tokens until one team wins by delivering to the client or having the other team being stopped by the police. A new round is set up and teams can switch up who the Investigating Officer is if they like. The first team to win two rounds is the winner of Shadows: Amsterdam! 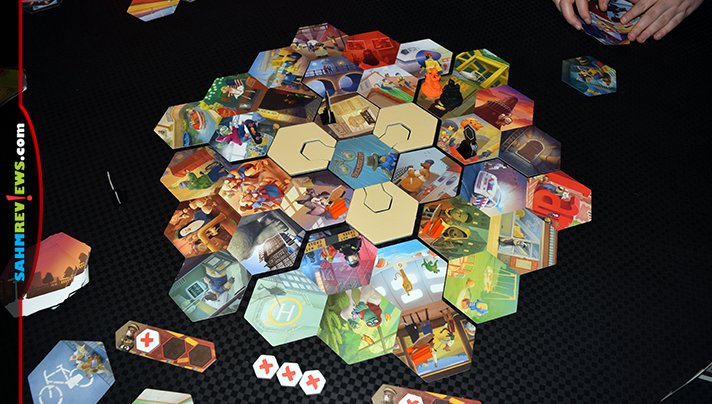 While best played in teams, there are special rules for two or three players where you play as one team in a race against the clock. Shadows: Amsterdam has a lot of features we’ve loved in other games like Inkognito, Cryptid and the aforementioned Codenames. It’s no wonder that we’re now huge fans of this game and hope there are more coming in the series set in different locations! 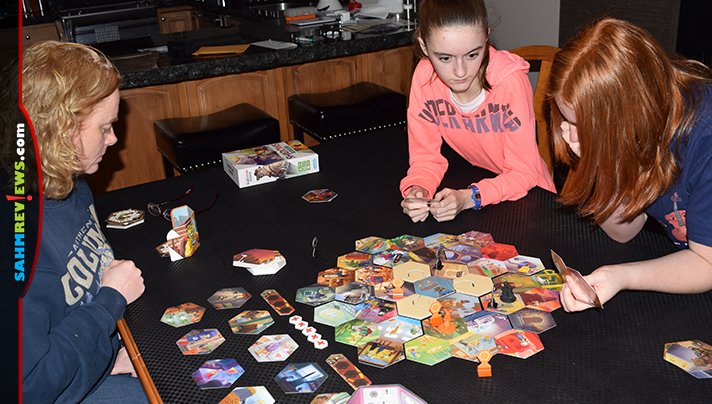