When we lived in Los Angeles, I had the opportunity to participate in advanced screenings of movies.  I always loved it and it’s one thing that I miss about living here in Iowa.  It was a time before we had kids and we frequently saw movies of all genres.  And loved it.

While we still love movies, we’re more limited on being able to go.  The difference now is that our theater experiences are dominated by kid-friendly movies.  But we’re okay with that because a lot of them are great these days.  A few weeks ago, we took the kids to see “How to Train Your Dragon.”  You know… it was awesome.  Not only did the kids enjoy it, but DH and I did as well.  I’ve come to realize that just because a movie is animated or rated “G” or “PG” for that matter, doesn’t mean it is only for kids.  “How to Train Your Dragon” is one of those movies that I would recommend to pretty much anyone.

But this isn’t a review about the movie.  It’s about the video game brought to us by Activision.  I’ve heard people before say that video games with movie tie-ins just don’t work.  While some games make more sense if you have seen the movie, they can still be entertaining even if you haven’t.  When our “How to Train Your Dragon” games arrived, we hadn’t seen the movie yet.  The kids sat down to play on their DS’s and created dragons of their own.  Once they had each created a dragon on their respective DS’s, they proceed into single-player game mode to battle dragons.  And they had fun.

Here are a few observations I made about the game for the DS: 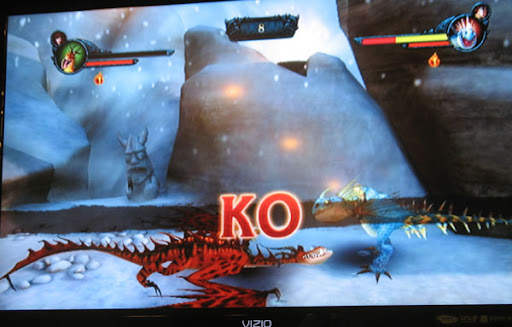 Let’s talk about the game’s rating.  I’ll admit that I let my daughters, ages 7 and 5, play “‘How to Train Your Dragon” which happens to be rated “E 10+” by the ESRB.  That means that it may be best suited for people aged 10 and over.  I watched the girls play the game when we first loaded it and honestly, the E 10+ rating is kind of overkill.  Yes, dragons fight to the death.  But a dragon’s death, even if totally engulfed in flames or blood, still isn’t what I would consider gory.  Did I have a concern that I was causing harm to my children (who are under the age of 10) by letting them play this game?  Heavens no.

With that said, they weren’t particularly fond of the multi-player (dual cartridge) feature on the DS.  Which leads me to my next section – Single player vs multi-player:  Not only can “How to Train Your Dragon” be played solo, but there are also two different options for multi-player.  If you have two DSs, but only one copy of the game, two people are able to play each other but they are limited to the type of dragon.  If each person has a copy of the game, they’re able to battle using their own customized dragons.  When I was talking to Miss K (age 5) about the game, she said “We don’t like that (multi-player) because we have to fight each other.”  There may be an option to team up and fight other dragons, but we didn’t find that.  Once they realized they had to fight each other, they had no interest in playing multi-player.  For most, that’s probably fine… for my girls, as I said, that didn’t work. I was convinced that was a characteristic of their age and not the game itself.  Once I played the console edition, I changed my mind and realized it has everything to do with the game and not just my kids. I’ll explain that in more detail when I explain the console features. 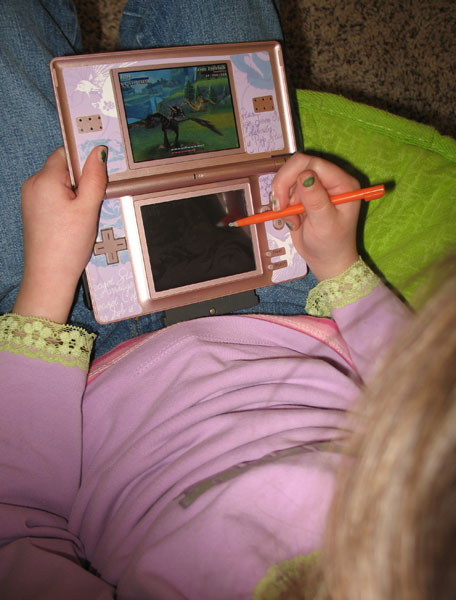 Graphics:  I can only describe the graphics as a mix of excellent and awful.  During the battle scenes, there was a decent amount of depth to the images giving it the appearance of a toned down console game.  However when moving between locations and back to the village, I felt like I was watching Pitfall for Intellevision.  (No comments from the peanut gallery about how old that makes me.)  At least the dumbed down graphics were during non-essential portions of the gameplay.  If you want great graphics for the entire game, grab a console copy instead.  In addition to the DS, it’s available for the Wii, XBox 360 and PlayStation 3.  We had the privilege of demoing the Wii console version which I’ll explain further on in this review. 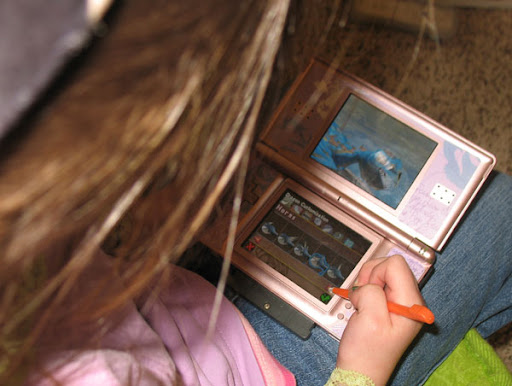 Customizing dragons: As we discovered in more depth during the movie, different species of dragons have different strengths and weaknesses.  Actually, when we were watching the movie, I had to laugh because Miss M leaned over to me and whispered “This is where we find out what we can unlock!”  Anyway… when you first set up your dragon, you can select the features that you’re most interested in utilizing in battle.  Torn between types of dragons?  That’s okay because you’re able to customize a few different dragons and store them in a stable in the village.  When you return to the stable, you can switch to a different dragon.  Not only does this give one person some variety, but it also allows for a few different family members to participate in the game using their respective dragons.

Gameplay:  You navigate your way and battle various dragons.  Utilizing a handful of offensive or defensive moves, you take turns fighting the dragon.  It isn’t a Mortal Combat style game where you’re both fighting simultaneously, you’re literally taking turns.  After you make a selection, the game enacts your moves then shows how much damage you inflicted on your opponent.  Then you wait until they do the same.  While I felt this was monotonous, my daughters were fine with it.  My niece (10) and nephew (13) both played the game and said it was a lot of fun.  When I was talking to my nephew about it, he admitted that the battle scenes are a bit redundant but that the game in general was entertaining. 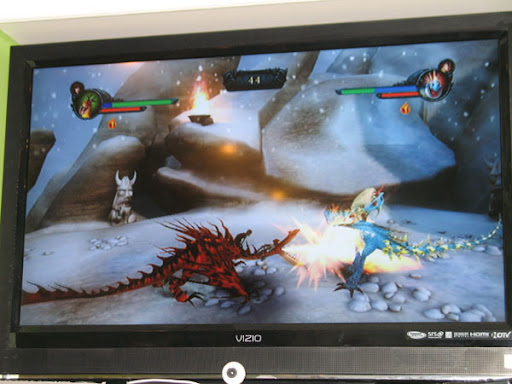 Here are a few observations I made about the game for the Wii:

Game Rating:  As is to be expected, the graphics on the console version are significantly more robust than the DS version.  However, I STILL wouldn’t consider it a gory game and feel the “E 10+” by the ESRB errors on the side of caution. 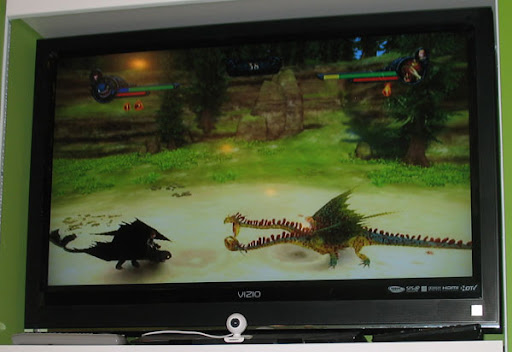 Single player vs multi-player:  Story mode is single player, arcade mode is multi-player.  Unfortunately, multi-player is only PvP.  Unlike the camaraderie displayed in the movie, these dragons only fight each other.  As I said before, I thought it had to do with my daughter’s ages but I was seriously disappointed that Miss M and I weren’t able to launch an assault together.

Graphics:  Be-a-u-tiful.  Vibrant colors and details.  I’ve provided plenty of pictures so you be the judge. (Try to look past the glare from the lights.)

Customization:  Yes, you can create different dragons.  As I said before, different dragons have different strengths and weaknesses.  Since dragons require rest, it helps to have more than one available.  This allows you to let one sleep, grab another and can continue to play. What makes it even more interesting is that not all dragons like the same items that increase food, health, mood and trust. 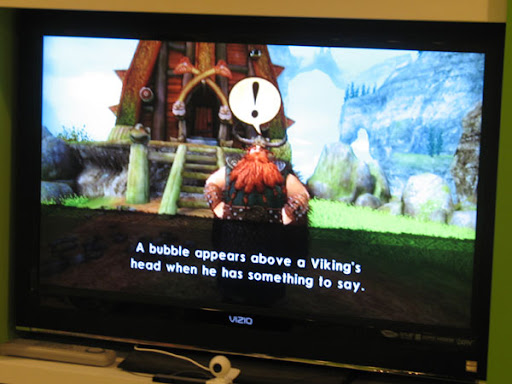 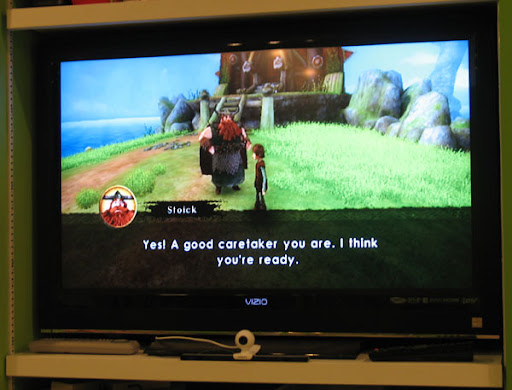 Gameplay:  I’ll start with the easy one:  Arcade mode.  As I said, it’s for PvP (2 player) or solo where you’re battling the computer.  Miss M and I sat down to play and found that knowing the capabilities of each dragon makes all the difference.  Sure, you can hop into arcade mode and hit the ground running.  However, it’s best to start in story-mode and learn about the pros/cons of each dragon, how to create combo moves as well as the back-story. 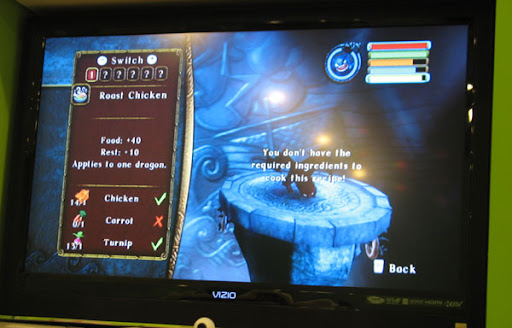 During story mode, you complete assigned tasks like learning how to forage for food – killing chickens or sheep in the village, picking plants and vegetables from the gardens and shopping at the merchant.  You also learn how to move and what it takes to make your dragon stronger.  After completing assigned tasks, you train with your dragon before competing in a tournament.  You also learn about creating recipes for increasing food, health, mood and trust.  I found the arcade mode to basically be a Mortal Combat or Street Fighter game.  It was fun but playing story mode made me feel like I was playing a modified version of WoW.  Something I found interesting when DH and Miss M were fighting each other in arcade mode… this isn’t a game for sitting down.  They both were able to control their dragons better, taking advantage of swinging the remote easier by standing up.  Since shaking the WiiMote initiates a particular dragon move, standing up while playing is the best option… and it’s funny to watch. 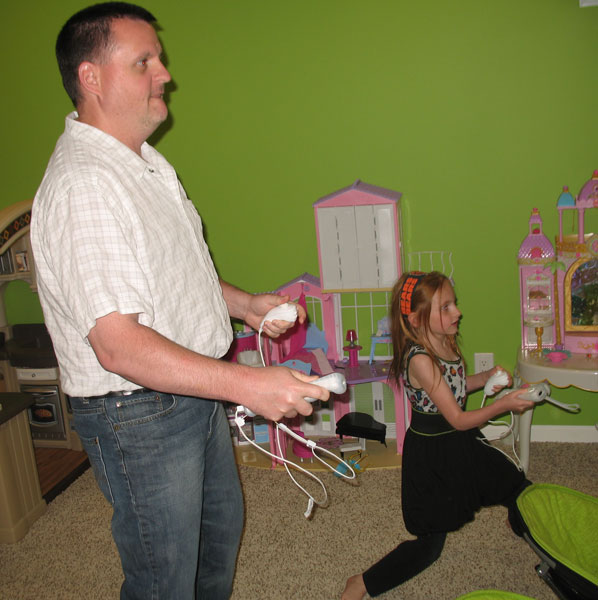 PvP. For both the DS and the console game, I hated that we couldn’t team up to battle a common enemy.  If there was an option to do so, we didn’t find it on either system.  Sometimes it is fun to fight each other but fighting together would have been a nice option.

Map. I don’t believe there is an in-game map.  This would have been helpful.

Pause key.  As I mentioned in gameplay, flailing around to maneuver your dragon is pretty much a necessity.  Numerous times, we bumped the pause key.  DH’s palm would bump it while gripping the WiiMote but Miss M and I just happened to keep hitting it while trying to remember which buttons were strike, evade, hit and taunt.

Overall:  It’s a really entertaining game for the Wii.  The kids loved the DS version but if required to choose, I would pick a console copy.  The kids enjoyed it and weren’t frightened or effected by the graphics.  Since we saw the movie, it just made it that much more fun.

Have you gone to see the movie yet?  If not, set aside some time to do that before it leaves the theaters.  In the meantime, representatives for Activision have generously given some extra copies of the game specifically for SahmReviews.com readers! 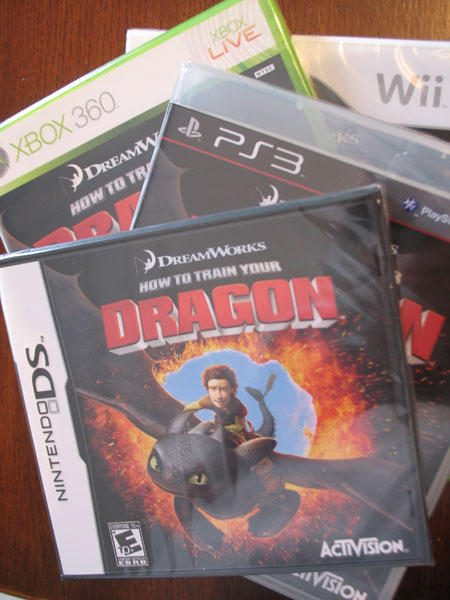 Participants –
…must provide a US shipping address
…must provide an email in the first comment, email me directly with an email address or have email accessible from their profile.

Sometime on May 7, 2010, winners will be chosen at random (using random.org) from all valid comments left. Winners have 72 hours from posting/notification to respond. If a winner cannot be contacted, I will move on to the next random selection.

160 thoughts on “Dragon Trainer at your Service”