When I was in grade school, I heard a snippit on the radio on the way to school.  It posed the question of “Do you prefer your toilet paper to go “over” or go “under”.  Up until that point, I honestly had never even noticed that there was a difference in how the paper hung.  It was like “Okay, the toilet paper is gone. Replace it.”  So when I heard this little trivia question, I made a mental note to see what on earth they were talking about.  Over?  Under?  Huh?

And then I realized the power of suggestion.  Something that I had never noticed before now became an obsession.  A preference.  An annoyance.  I discovered that I prefer the toilet paper to hang with the paper going over the top – away from the wall.  When it is hanging the other way, I feel like all the paper hanging down is rubbing against the wall and getting dirty.  Ick.

It’s a strange feeling using the restroom somewhere away from home and finding yourself noticing whether they roll the paper over or under.  I find it even odder that I feel compelled to want to flip the roll when it is not hanging to my liking.  Do I?  If I’m at my mom’s house, YES.  If I’m anywhere else, I respect them and leave it alone.  But none-the-less, I desperately want to flip it over. 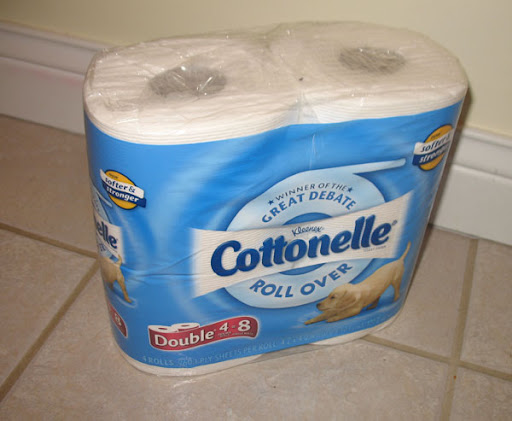 While I thought I had developed some sort of obsessive-compulsive behavior, I know that isn’t the case.  Cottonelle created a Roll Poll asking the question:  Which do you prefer?  I was so glad to see that 72% of the people felt the same way I did… they prefer “over”.  Are they as fanatical about it?  Some, yes.  People have posted comments on the results page.  Some just say that they prefer “over” while others actually justify and explain why!  It’s crazy.Mom Central invited me to participate in this campaign and I’ll be honest and say that while the debate itself struck a chord with me, I couldn’t recall ever trying Cottonelle.  I usually shop for toilet paper at Sam’s Club – and our local one offers only Charmin and Quilted Northern.  My preference had always been Quilted Northern until they offered pink ribbon packaging last year – with a portion of the sale supporting cancer research.  The price was the same so I was very excited to see that a purchase that I already make would now benefit breast cancer research!

Unfortunately, my opinion of Quilted Northern was dramatically deflated when I got home and found the package was much smaller than the prior package.  The rolls were smaller.  And my impression of the company was…well… in the toilet.  While I thought they were contributing a portion of the sales to a worthy program, I found that they were actually shortchanging the customer in order to make that happen.  So when Mom Central sent along the sample of Cottonelle, I was open minded about trying it out.

What did I think?  I liked it.  Can’t believe I haven’t tried it before.  It’s soft yet sturdy but didn’t clog the toilet.  The rolls are a good size and the price is fair.  The packaging even offers Boxtops4Education!  Will I purchase it again?  Probably.  I’ll definitely put it in the suggestion box at Sam’s Club!

If you want to voice your opinion about the Over/Under debate… and you aren’t talking about gambling… stop by Cottonelle’s Facebook Fan Page or find them on Twitter.  Feel free to leave a comment here with your opinion of over vs under!

2 thoughts on “Betting the Over-Under”