Shortly after Miss M was born, we relocated from Palmdale to Arcadia, California.  A few years later, we decided to move back to Iowa where we could raise the girls around family.  It was always one thing or another that made things chaotic: the new baby (Miss M) or the pregnancy (Miss K) or the move to Arcadia (during the pregnancy) or the new baby (Miss K) or the move to Iowa.

And each chaotic thing gave me an excuse to avoid going to the dentist.  Oh, and I didn’t have dental insurance so I used that excuse too.  It was a couple years between appointments but my teeth seemed fine so I figured “a little longer isn’t going to hurt”.

Pfft.  Don’t judge me.  I’m not the only person who avoids the dentist whenever possible.  No offense to dentists, of course. It’s mainly because as a young child, we saw a dentist that found a cavity literally at every visit. My parents eventually realized the dentist wasn’t very good and we switched. As an adult, my mom told me that she had later found out that he had several problems and that other dentists were well aware of his shenanigans. I’ve come to believe that he drilled and filled even when there wasn’t necessarily a cavity… all for the sake of profit. Not only at my parents expense financially, but causing his patients emotional and physical issues. But that’s a story for some other time.

Anyway… In October 2006, I received a Philips Sonicare toothbrush as part of a BzzAgent campaign.  I had always wanted one but was just too cheap to spend that much on a toothbrush and I didn’t want just any kind of electric toothbrush, I wanted a Sonicare.

We finally settled into Iowa and I made an appointment with a dentist that we went to before moving California… and who my parents and brothers still go to.  When the hygienist cleaned my teeth, she grabbed my chart and asked me to confirm when my last appointment was.  She said that my teeth looked just as they would during a regular six-month cleaning.  She applauded the results and confirmed that the Sonicare is a great product.

Now… that brings us to an ongoing disagreement I have with DH.

I have used Crest with Tartar Control since, well, I can’t remember when. Hubby, on the other hand, uses Colgate… exclusively. It’s not that I’ve never been a fan of Colgate but I’ve always felt the “Tartar Control” part of Crest would help keep the tartar away. I would try DH’s Colgate here or there like if we traveled and I forgot mine. I didn’t NOT like it but I just thought that Crest Tartar Control was the ONLY way to go since I had used it for so long. As new Crest products came out, I shunned those also.  But after that dental appointment and talking with the hygienist, I realized that the Sonicare deserved the credit as opposed to my much-loved Crest with Tartar Control.

I certainly didn’t want to give DH the idea that he was right or that I was wrong or any gray area in between because, well, I just don’t want to give him that kind of ammo.  But when one of my PR contacts asked if I would be interested in trying out a few Colgate products, I figured “Sure. If all else fails, DH will have a new stock of toothpaste.” Besides, the package she was offering included some kids’ toothpaste, and that was huge. My girls are big fans of Colgate’s branded toothpaste line. Even before we let them start watching SpongeBob, they couldn’t resist requesting Colgate’s SpongeBob toothpaste. 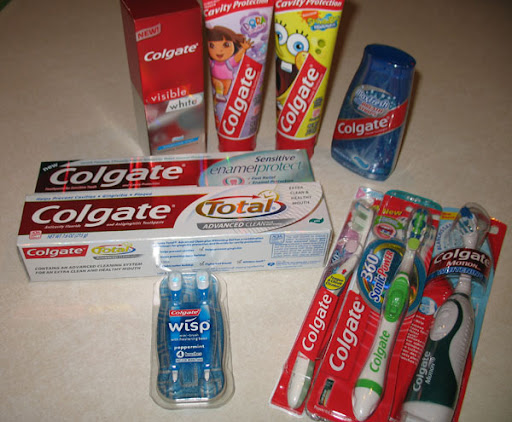 So the package arrived and it was filled with several items:

First, it’s important to know that I have two crowns that resulted from fillings from my childhood that finally gave out in adulthood.  As a result of the many fillings, I sometimes have sensitive teeth.  Every once in a while, when I start to experience discomfort while brushing I switch to a sensitive toothpaste until cold drinks don’t bother my teeth. For that reason, I opted not to use the Colgate White because my dentist had told me that whitening toothpastes tend to be a little harsher on the teeth and might aggravate my sensitive teeth.

The first one that I started off with was Colgate MaxFresh. It’s a very robust toothpaste that left my mouth feeling clean while giving me nice fresh breath without needing mouthwash. I liked it and would definitely add it to my personal ‘approved’ list. Following that, I utilized Total Advanced Care. Thinking it was going to be the most comparable to the Crest Tartar Control that I had been using, I used this exclusively for a few weeks. It did, indeed, give me the same clean feeling that my Crest did but it also made my teeth very sensitive. I hadn’t noticed the small print that said “plus whitening”. Because of that, I think that other products in the Colgate Total line would be fine for me but the whitening bothered my sensitive teeth. Thankfully, the package included a tube of Colgate Sensitive. Obviously, I switched to that next and have been using it since. My teeth aren’t sensitive to the cold or hot now but I’ll continue to use this one. Despite being a “sensitive” toothpaste, this toothpaste worked well and made me feel like my teeth were clean. It’s definitely one that I would add to the list of toothpastes I would use.

As for toothbrushes, I decided that utilizing either the Sonic or the Motion toothbrushes wouldn’t be appropriate. Because I’ve been using a Sonicare so long I didn’t feel I would be able to prepare a balanced review. I’ll turn those over to a contributing author who can provide a more balanced opinion of them.  For me, I opted to use the Colgate 360 to replace the manual toothbrush I use – as well as the variety of toothpastes with my Philips Sonicare toothbrush.  As I mentioned, I used my Sonicare mostly, but there are times when I use a regular, manual toothbrush. For example, I’ve been fighting a head-cold so I have been taking longer-than-normal showers to help steam my head clear. On those occasions, I opted to use the Colgate 360 while in the shower… figured I was just standing around wasting water so I might as well make use of the time and water by brushing my teeth. I have to admit that I loved this toothbrush. It’s ergonomically designed handle and gel grip were comfortable. The bristles felt good (and effective) and the tongue/cheek cleaner worked great. I always brush the roof of my mouth but it often aggravates my throat, making me cough or gag. With the 360, I was able to do it without coughing. I’ve used a variety of brands and styles of toothbrush but when I used the 360, I didn’t feel rushed to just finish up. Part of that is because my Sonicare has helped me realize how long 2 minutes is but mostly because it’s just a very comfortable brush.

For the kids… well, I’ve already said how much they love the character toothpastes. The Colgate kids toothpastes are our usual purchase.  As long as they are happy with the toothpaste, they are more likely to brush their teeth.  I’m all for that.

The one thing in the package that is a little more unique is the Wisp. It’s a disposable toothbrush that doesn’t require water. They’re perfect for keeping in your purse, desk or briefcase. I, personally, have a package in the car because as a mom… I’m in the car a lot. Just like some people keep gum on hand, the Wisp is small, handy and effective. And if you’re on your way some place where you want to make a good impression, sometimes you want clean, fresh breath but you don’t want to walk in chomping away at gum. They come four to a package.

Overall, I really liked the Colgate products. They’ve come a long way since I used them years ago and I’m glad I had a shot at trying a variety of them out. I realized that there are so many to choose from that it doesn’t take much effort to find the one that targets exactly the ‘issues’ that I want. As for price, they are comparable to other toothpastes so I am comfortable adding them to my list of “approved” products.

Oh… and don’t go telling my husband that I like Colgate… or I’ll never hear the end of it.

3 thoughts on “Let the Tooth Be Told”