Last week we told you about Tennis, a card game that we found at the Quad City Symphony’s annual Second Fiddle Tag Sale. We picked up six games that day ranging in price from $1 to $3, each one missing from our collection. Today we’re highlighting another from that group that is more in line with what we expected to find at a sale hosted by a music organization.

I’m normally not a fan of music games since they either require a broad knowledge of music genres, the ability to sing or proficiency in reading music or playing an instrument. I have none of these. A recent feature here was an exception – Paraphrase by Flying Lemur Games. In it, all I needed to do was remember the title of songs from a particular era and decipher the clues around the title.

Noteability by Tiger Games was originally issued in 1990 and caught our eye because of the inclusion of a “baby” baby grand piano! You are trying to decipher the songs by listening to a stanza played on the piano. Don’t worry, you don’t have to be able to read music – the notes are laid out on the answer cards and include rests. The rules even suggest playing it slower than normal until you get the hang of it. 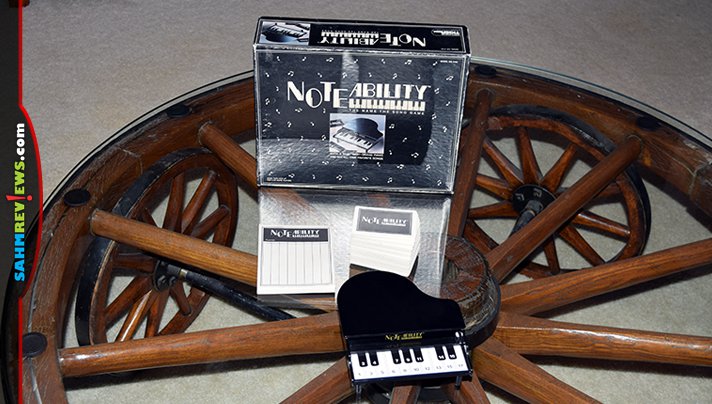 Noteability can be played as teams or as individuals, theoretically supporting an unlimited number of players. On each card is three songs of different genres. On a turn the piano player will play any one of the three songs, up to twice, for either their teammates or the player on their left to guess. If correct, the team or individual will receive four points, which are kept track of on a piece of paper. In incorrect (or no guess), the other team (or other players) may try to steal by guessing and receiving two points for a correct response.

The keys on the piano are numbered from 1 through 17 and are called out on each card for a note to be played. Rests are denoted by dashes and spaces are ignored. We weren’t huge fans of how the music was transcribed, but haven’t come up with a better solution either.

After one song has been played and answered, the piano player then plays a second song from the same card for their team or the next person in clockwise order. Again, they may play through it twice and the opponents may steal if they pass or answer incorrectly. In the individual game the piano player also receives two points for every song identified correctly as a reward for a good performance! 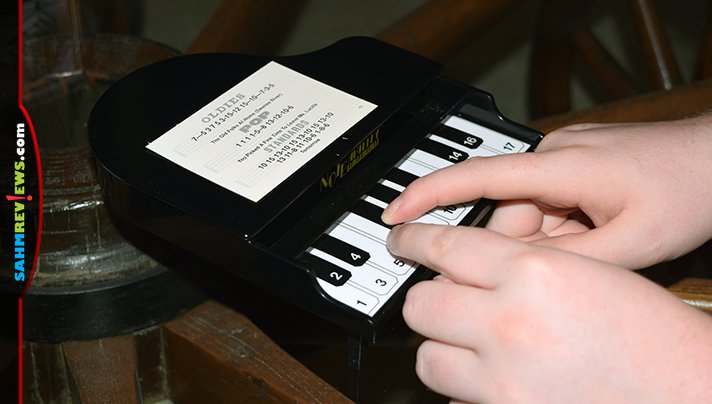 At any time if their primary Guesser feels the piano player is intentionally playing poorly to prevent them from scoring, they may call for everyone to “shoot the piano player”! After discussion and a unanimous vote by everyone except for the piano player, the piano is passed to the next player on the left in order and the role of Guesser also cycles clockwise. The first player (or team) to collect a total of 50 points or more is the winner of Noteability! 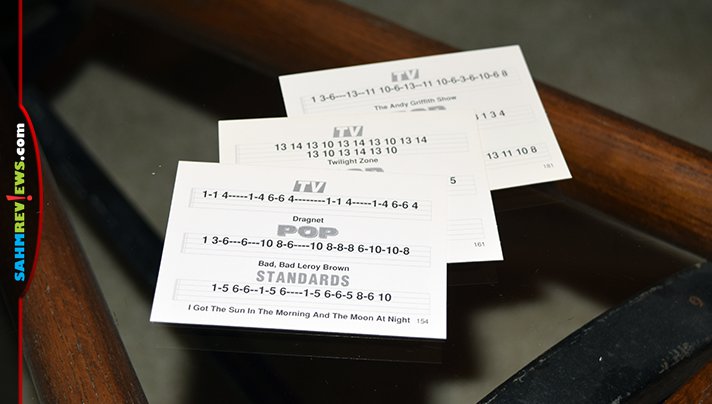 The one drawback, and for any game this old, is how the content ages. Just like in a trivia game where answers may change over time or become outdated, most of the music in Noteability is more vintage than current. The Oldies category includes folk songs and the sort from the 19th century. The POP category is what most today would consider oldies, while Standards are not so standard any longer. Fortunately the TV Tunes, while vintage, still hold a place in our hearts.

Another one that can be found easily on eBay, this is the first time we’ve ever seen one at thrift. Probably because of the piano since there is no on/off switch, requiring you to remove the batteries each time you play. If you forget, you’ll certainly be greeted by corrosion, rendering the game useless. And as with all things electronic, they break with use. I’m sure many of these ended up in the trash!

Do you play piano?