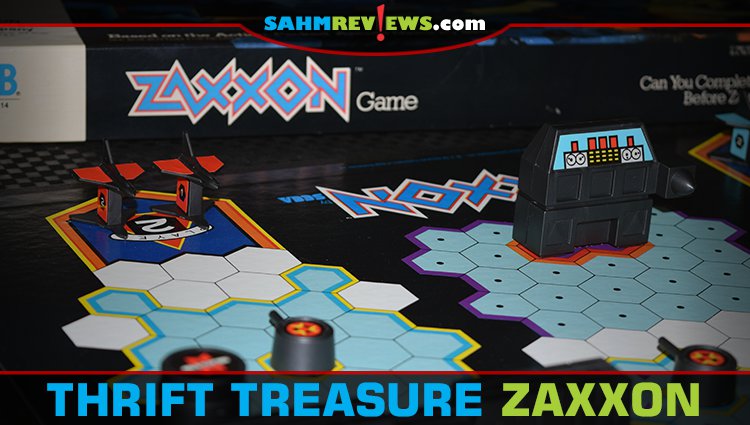 When I spotted this copy of Zaxxon at the Quad City Symphony’s annual Second Fiddle Tag Sale, I couldn’t get it into my hands quickly enough. It went into the pile with Rummy 21, Noteability and Tennis along with a couple more you’ll be hearing about in the upcoming weeks.

Being a child of the 80’s, Zaxxon was the first 3-D video game I ever got to play. It’s 3/4 view scrolling display was revolutionary at the time and I lost count of how many quarters I spent trying to beat my high score. I was never what one would consider “great” at the game. Fortunately just playing it brought me more than 25 cents worth of joy. Milton Bradly capitalized on its popularity with this board game it created in 1982 to simulate the electronic experience. Designed for two players aged 7-14, both people play at the same time, unlike the video game version. 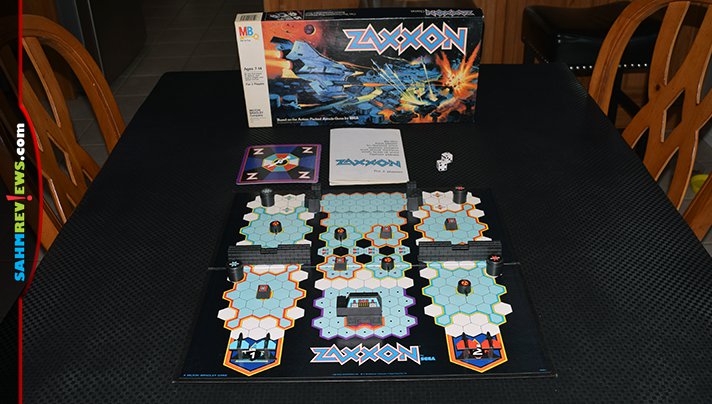 The Zaxxon board game wasn’t just a standard game with a theme thrown on. It was designed from the ground up to incorporate the many things present in the arcade version. From the large custom board to the innovative variable-height pieces, everything about the game screamed Zaxxon.

Setting up the game is pretty quick thanks to special symbols printed on the board denoting piece placement. The board is set in the middle of the play area and the Fuel Tanks, Missile Silos, Gun Turrets and Long Walls are placed in their designated spaces. Each player receives two Fighter Planes with special bases and puts them in their individual starting areas. The final boss, Zaxxon himself, sits in his own special area at the end of the pathways.

The board has a pathway that resembles the letter “M”. The legs of the “M” are called the Outer Fortress for each player, while the center path is labeled the Inner Fortress (which leads to Zaxxon). Each player takes one die and rolls them at the same time. If tied, both players reroll until each has their own result. The player with the lower number will play first. 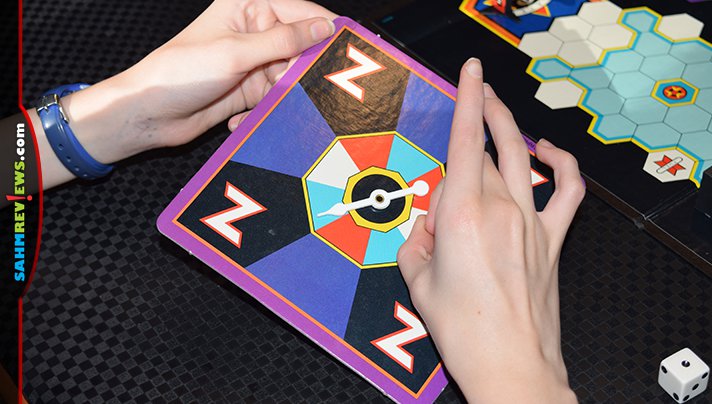 The first player will spin the included spinner, which controls enemy fire from Missile Silos and Gun Turrets. If your plane is in the area for silos or turrets when the spinner gives that result, your plane is shot down and returned to the start area. Same goes for your opponent! They don’t spin themselves – they are subject to the results you spun! 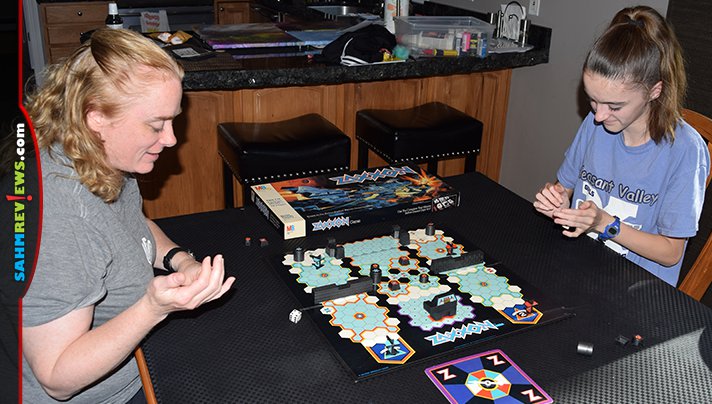 After the spinner is resolved, the first player then spends action points equal to the number of pips on the die they rolled. An action might be to move one space on the board or to shoot at a target (each space the shot moves through counts as one action). It only takes one hit to destroy the targets, so any actions left over can be used to continue your turn (moving or shooting again, if in range). 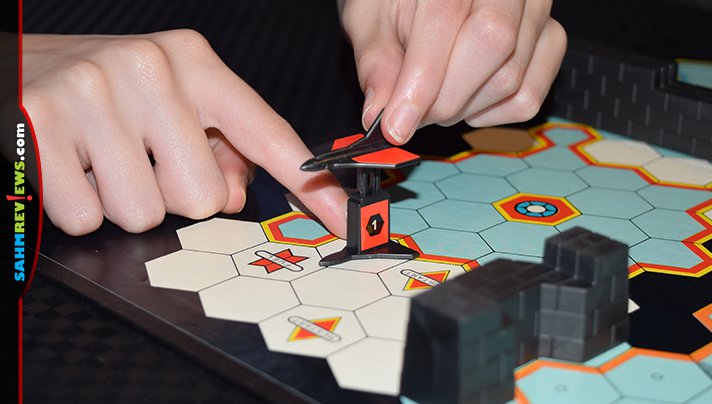 At various points on your trek there are walls you must go over. Each wall has a small area you must guide your plane through, just as in the video game. The player pawns (planes) have an extendable base that allows them to fly at a low or high height. Changing heights also costs one action point and you can only shoot while in a low position. But to traverse the wall you must fly high to make it over! 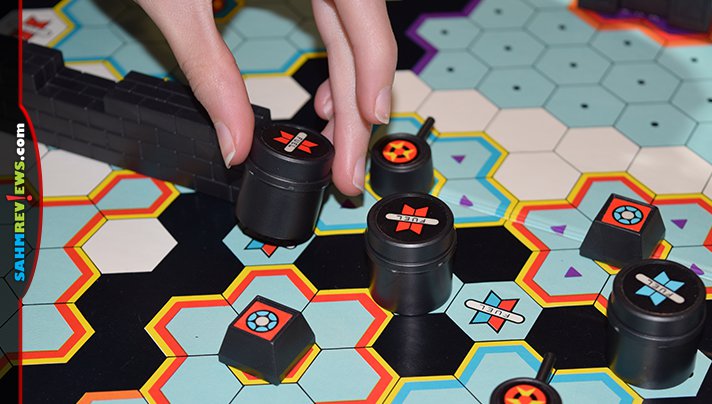 Once over the second wall, your path collides with that of your opponent. In this area a dogfight might occur where you shoot at each other, trying to send them back to the closest restart point (save point). Fixed barriers, more fuel barrels and additional gun turrets are in your way before you can take on Zaxxon. Maneuver your planes through these obstacles and set up to take a shot at the boss! 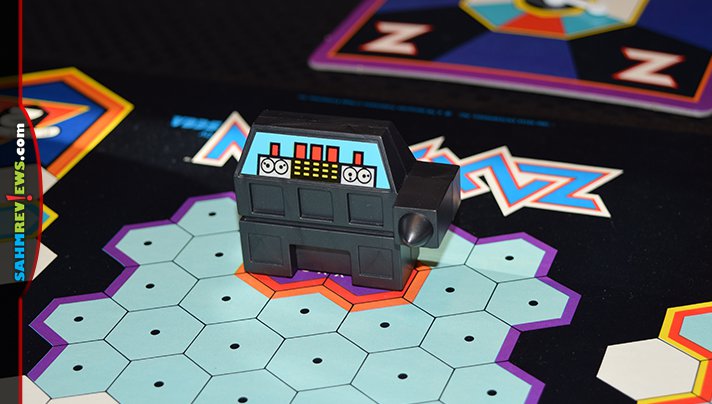 Any time a plane crosses the printed Radar Barrier, Zaxxon is alerted and is activated. The spinner is spun and will either result in him moving the same number of spaces as the die count (and shooting an unlimited distance) or have it doing nothing and remaining in the same space. Your goal is to shoot and hit Zaxxon once with each plane. When successful, remove the plane from the board and focus on getting your other plane into shooting position. The first player to successfully target and shoot Zaxxon with both planes wins!

While strategically not up to today’s board game standards, the same could be said for the arcade game when compared to today’s releases. However, I still found Zaxxon to be a wonderful tribute to the original video game and look forward to painting the pieces to closer match the digital version. You can find copies of Zaxxon on eBay for very reasonable prices, probably because it was widely issued and a popular Christmas present in 1982! If you’re a child of the 80’s, you’ll want this in your collection!

Have you played any board game versions of arcade games?