We often talk about the various things that excite us about playing a specific game. Whether it’s the type of game (press your luck, logic, strategy) or the theme (nature, Marvel, whatever), there’s typically something that stands out that drives our interest. While we don’t often call out the names of designers on the site, our personal game collection is definitely impacted when one of our favorite designers releases a new game. But what if I said it’s the designer, but this is the first game he’s had published? That’s the case with the game I’m about to tell you about, The Mansky Caper from Calliope Games. The game is fun, creative and filled with Easter Eggs, but the designer, Ken Franklin, is simply a class act of a human being, a retired doctor and a Veteran. 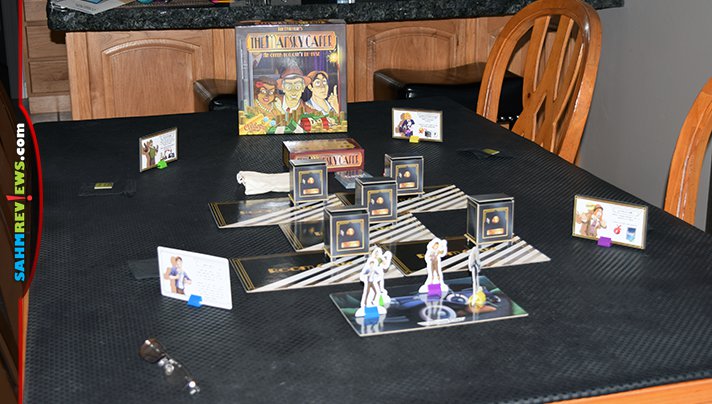 So let’s talk about the game! As is the case with most titles like Ancestree, Running with the Bulls and Tsuro from Calliope Games, The Mansky Caper accommodates 2-6 players. The game has a variety of interchangeable components that make each play-through unique. As an example, when you set it up, you’ll randomly select from the eight available characters, each with a unique special ability along with five of the ten room cards. The remaining ones will be returned to the box and not used in this game. Place the five rooms face down in the center of the table to form the home of Al Mansky. Place an empty safe on each room and the Getaway car outside the home. Place the deck of shuffled Gasp! cards, the box of tokens and the bag of loot next to the mansion. Each player selects their player, takes the corresponding character card along with a favor marker. You’re ready to go scavenge his place for loot now. 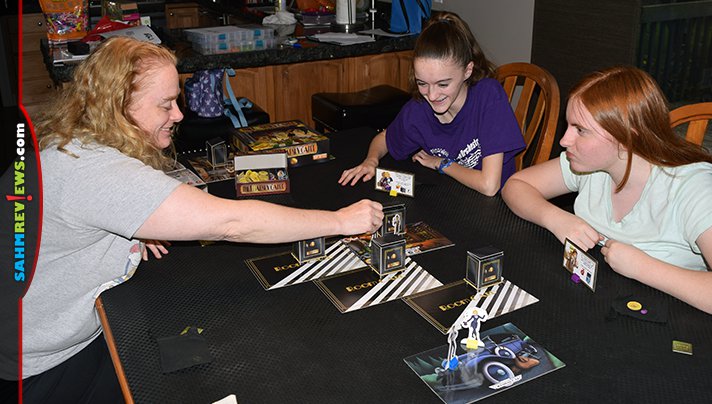 So why, exactly, are we ransacking a wealthy man’s mansion? Because he isn’t any typical man, he’s the richest mobster in the country and he’s been keeping more than his fair piece of the pie. So while he’s out of town, we’re all breaking in to see if we can redistribute the wealth while simultaneously avoiding the traps he put in place to protect his riches. You’ll take turns discovering rooms (and populating the corresponding safe), opening safes to accumulate loot, dodge/disarm traps and secure your finds in the getaway car. On your turn, you’ll opt to 1) stay put and open the safe in your room, 2) move to another room and open the safe or 3) stash loot at the getaway car.

When you’re the first to discover a room, you’ll make note of the icons on the board and populate the new safe accordingly. At the beginning of the game, two players will enter two different rooms to start the game and the rest of the players will choose between those. The remaining three rooms are available to be accessed in following rounds if you have found a key among the loot. 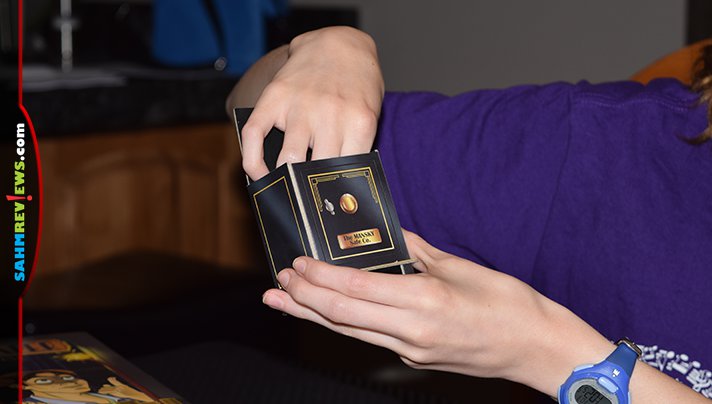 Sometimes it’s good to venture to a new room so you can keep the loot for yourself, but there’s also a benefit in being in a room with other people. When a player opts to open a safe, they shake the safe then reach inside and randomly grab one token. 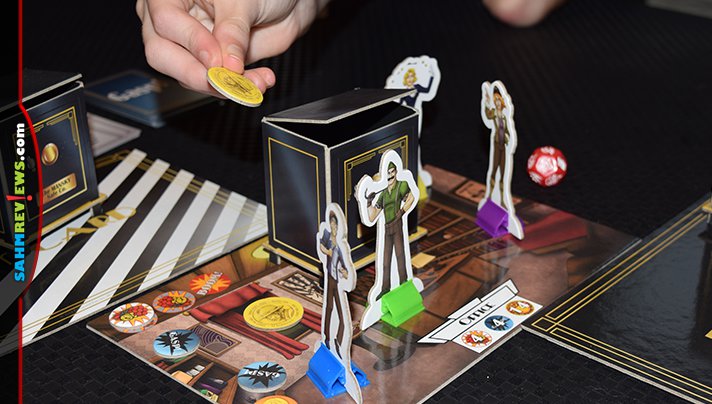 If the token is loot, you’ll split it evenly with any other accomplices in the room. That means you’ll be able to get loot even when it’s not your turn. Unfortunately, that also means you’ll have to share the loot you grab. Any loot that cannot be evenly divided by all the people in the room is left on the floor until enough is there to split. Each time someone exits the room, the remaining loot is examined and if it can now be split evenly then it is. Likewise, if you’re the last person in a room then you’ll get to pick up everything that everyone left on the floor! 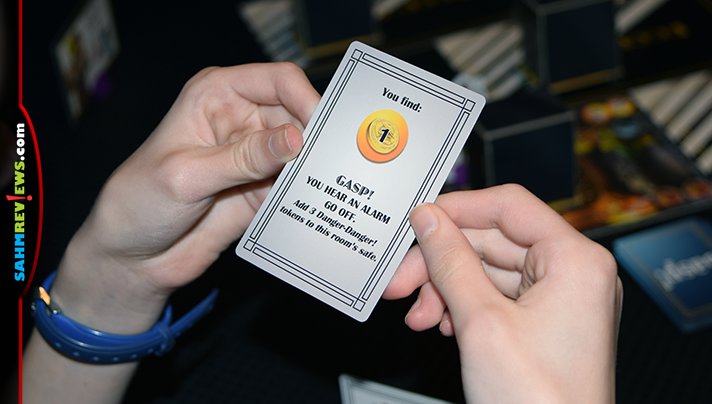 But Boss Mansky didn’t trust the banks nor did he trust that a safe would keep his stuff, well, safe. So he filled them with traps of various types. If your attempt to take something from the safe resulted in a Gasp! token, you’ll need to flip the top card from the Gasp! deck and resolve it immediately. 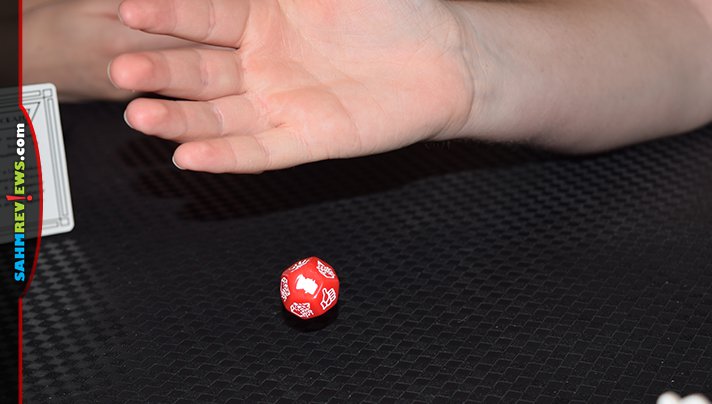 While sometimes the Gasp! cards are a division of mostly good but some bad results, the same cannot be said for the Danger-Danger tokens! If you happen to draw one of these then you’ll place it on the Danger track for that room then roll the Danger-Danger! die in hopes of disarming the trap. You may get lucky and disarm the trap (whew), blow up all YOUR loot that hasn’t been stored in the getaway car (awww), blow up ALL the loot in the room including everyone’s unstashed loot and leftover loot on the floor (yikes), or completely destroy the room and everything in it (OMG!). The last potential result is that Al may show up so you’ll need to hide until he leaves again. If you’ve pushed your luck too much and fill the last spot in the Danger track for that room, you’ll immediately blow up the room. 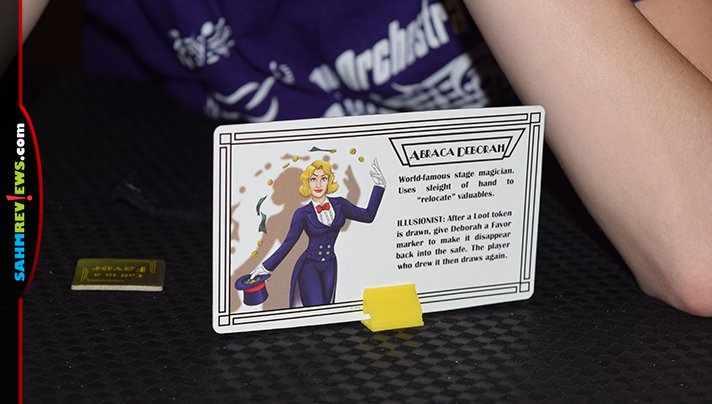 When you’re feeling like it’s time to save the loot you’ve acquired, you can head to the getaway car to stash it. Place those items into your personal loot bag. It’s (mostly) safe from being lost once you’ve put it there. A player at the getaway car with you may opt to use their Favor Token to ask that everyone there at the time evenly split all their stashed goods. However, that’s not the best use for the Favor Tokens. They’re actually designed to call in favors of your fellow accomplices. Maybe they’re good at defusing bombs or taking extra loot from the safe and you want to take advantage of their abilities. Give them a Favor Token and call in a favor to use their ability on your turn. It’s not what you know or who you know, it’s how you use who you know. 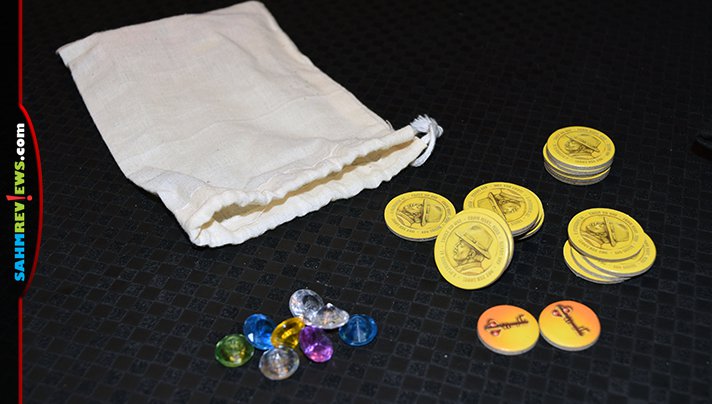 The game continues until all rooms are destroyed or everyone returns to the getaway car and unanimously agrees to leave the remains of the mansion intact. With money valued at 1 point each, keys valued at 3 and gems tipping the scales at 5 points each, the player who has accumulated the most points at the end wins! 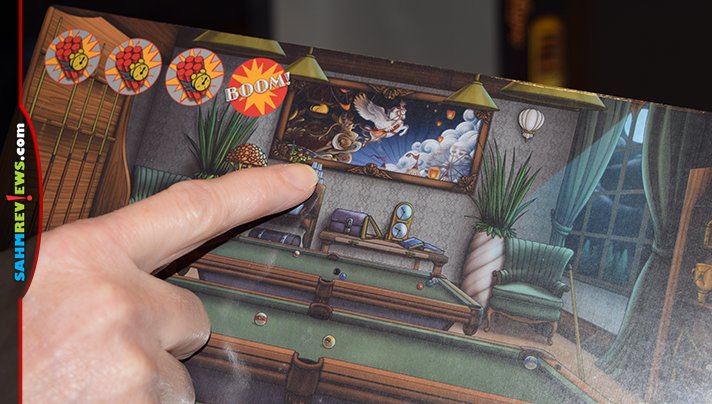 Plundering the safes is fun, but as I mentioned before, the game itself is also filled with surprise Easter eggs. Survey the paintings, sculptures, rugs and decorations in the rooms and you may spot logos or artwork from other Calliope games. A good eye and you may even see pictures of real people (in cartoon form)! You can engage with Dr. Ken Franklin on Twitter or follow along with the antics of the Calliope crew on their Facebook and Twitter channels. You can pick up a copy of The Mansky Caper on Amazon or direct from Calliope Games’ website.