Lately we’ve covered games about trees, plants (Herbaceous Sprouts & Herbalism) and birds (Wingspan & Songbirds). These nature-inspired games are all the rage and there is no end in sight for titles featuring these serene themes. They are topics we enjoy playing and make the games more approachable for friends and family who haven’t played a board game beyond Yahtzee or Monopoly.

Games about bugs are nothing new. Most think of the classic Bed Bugs when asked which bug-themed game they’ve played.  And I’ll be the first to admit that most bug-themed games we’ve played are not what I’d call calming. Usually you’re fending off some type of invasion or preventing the bugs from getting your food. That isn’t the case with Dust in the Wings by Board & Dice – this one chooses beautiful butterflies as the subject for their abstract-style game! 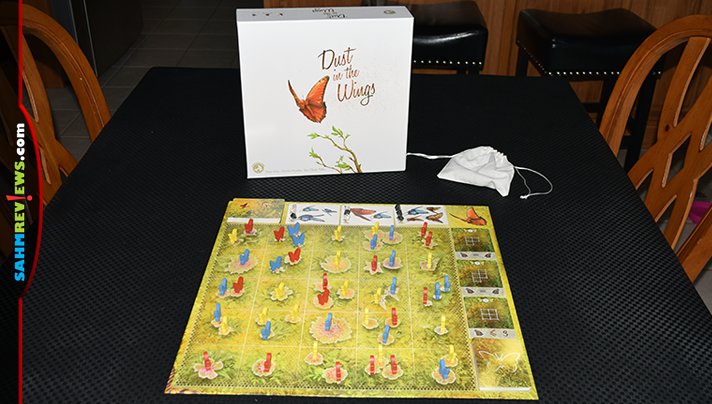 The premise of Dust in the Wings is that you are a photographer who is trying to take captivating images of butterflies in their natural environment. There are certain compositions you are looking for, such as specific types in the shot or certain numbers in a field. These goals are represented as cards, which we’ll talk more about in a minute. 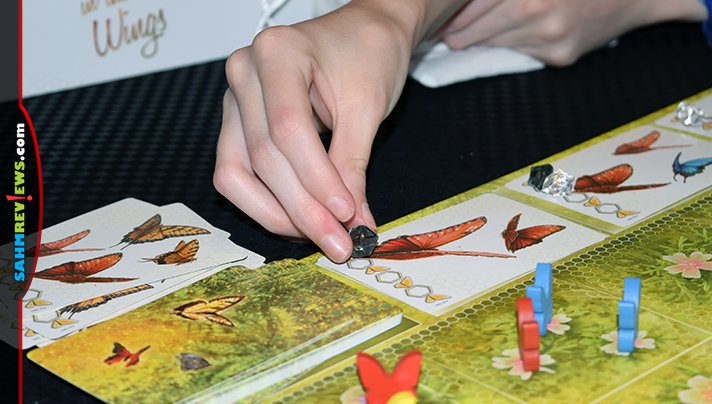 Setting up the game is pretty quick. Lay out the large board in the center of the play area and randomly populate the flowers with butterflies, one per bloom. Scoring Crystals are put into an included cloth bag while Gathering and Composition Cards are shuffled into their own decks and set on the board. Three of each card are dealt out to the open spaces next to the decks and a Scoring Crystal is drawn and put on each of the Gathering Cards. The last person to have visited a butterfly conservatory becomes the first player! 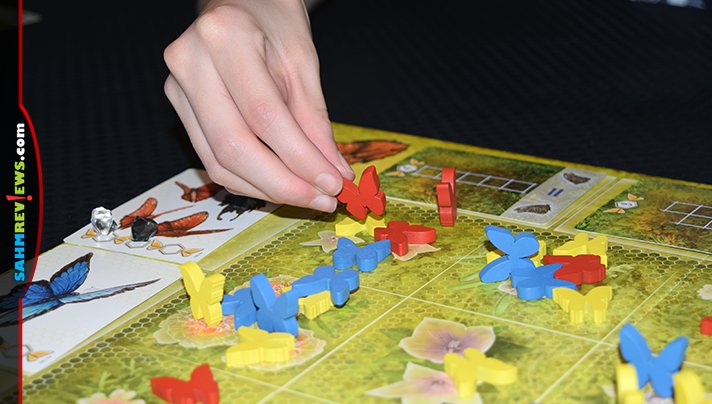 On a turn, a player will choose all of the butterflies in one square, pick them up and drop them on adjacent squares Mancala-style. This simulates the butterflies’ flight as they hop from flower to flower. They travel to any orthangonally-adjacent square, where one butterfly lands, and then on to another adjacent square until they have all landed in a space. They may not reverse course back to the flower they were previously on, but may get back there by travelling through other squares, eventually returning to their original space.

Whichever square the last butterfly landed on is the area in which you will try to score with. Gathering cards call out specific colors and quantities of butterflies, and if your final square matches a card, claim the Scoring Crystals on it and put the card in the discard pile. 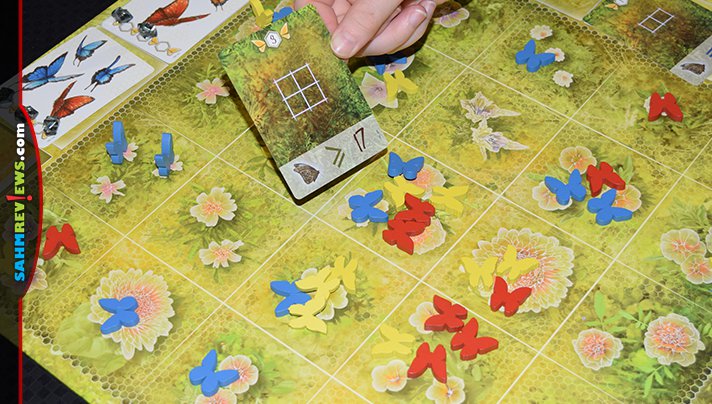 Matching a Composition Card is a little more difficult. On each card is a polyomino shape that represents an area on the board. Your butterfly’s final landing square must be part of the shape and the overall area must match the requirements at the bottom of the card. These cards might require the total number of butterflies to be less than or equal to a certain number or greater than or equal to a much larger number. Alternately, it may ask for all spaces in the polyomino to have the exact same number of butterflies, whether one each or many each! Again, if you meet the criteria, claim the card and keep it in front of you. Note – you can only claim one card per turn, regardless of the type. So choose wisely! Usually the highest-valued card is the right choice. Unless you see that your opponent might grab some easy points on their turn, then you might choose a different card to prevent them from getting it! 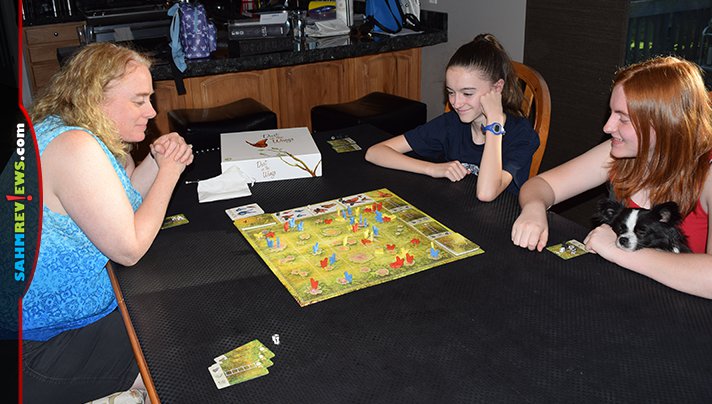 At the end of your turn you will fill the empty space left from the card you took by drawing a new one. Any Gathering Cards that have three crystals on it are discarded, with the crystals being returned to the bag and a new card drawn. You will then randomly draw three new crystals from the bag and place one on each active card. Players take turns in order moving butterflies, claiming cards and refilling the board until the last crystal is drawn from the bag. At this point only the next player in order gets to take a turn and the game of Dust in the Wings is complete. 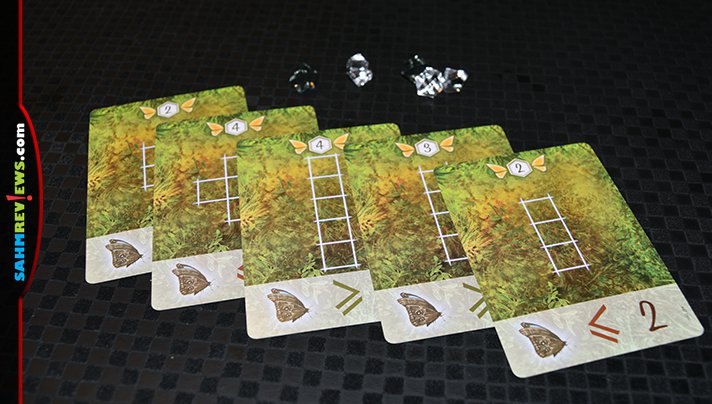 Players add up the points listed on their claimed Composition Cards and receive one point for each black crystal and two for clear crystals. The player with the highest summed total wins Dust in the Wings!  Ties are broken by the person having the most clear crystals and then by the one having the fewest Gathering Cards (which are a bit easier to obtain).

Dust in the Wings made its US debut at the Origins Game Fair in June and we lost count of how many times we saw it being played in one of the open gaming areas and the Big Bar in the Hyatt. It’s very quick to learn, but will still challenge all ages as they try to determine how to move the butterflies to get the best score available. And who doesn’t love butterflies in the first place?! A perfect theme for any age.

You can find copies of Dust in the Wings on Amazon and shortly in your favorite local game store. Make sure you’re following Board & Dice on both Facebook and Twitter to find out where they’ll be demoing their games next and what they’re working on for the holiday season!

What is your favorite type of butterfly?

1 thought on “Dust in the Wings Game Overview”