It’s that time of year… the time when we gather together with family and friends to celebrate any number of holidays or events. No matter the size of your family, if you’re sharing a meal with more people, then you can definitely relate to the scramble that comes along with who sits where when it’s time to eat. Until I had kids of my own, I was always subject to getting relegated to the kids’ table and once I had kids, then we had to sit with the kids because, well, someone had to. It was bitter sweet. The conversations were definitely not as mature, but at least there was chocolate milk. Chocolate milk is magical and makes everything better.

Before you say anything… I don’t need anyone ruining my delusion by telling me there was chocolate milk at the adult table also. I need this little victory to help me remember the good things about being at the kids’ table. It wasn’t all bad. There were silly jokes and confiding in each other when someone would “help” us eat something we didn’t want to. It was a lot of laughing and giggling and not feeling like we had to be all formal. I wouldn’t dare slurp spaghetti like Lady and the Tramp while sitting at the adult table. A lot of these repressed memories came to the surface a couple years ago when we first connected with Kids Table Board Gaming during Gen Con. They were sharing a booth with Green Couch Games and were either pre-retail on their game, Food Fighters, or it had just been released. When we came across them again this past year at Gen Con, they had a couple games so we decided it was a good time to check them out and introduce them to you. 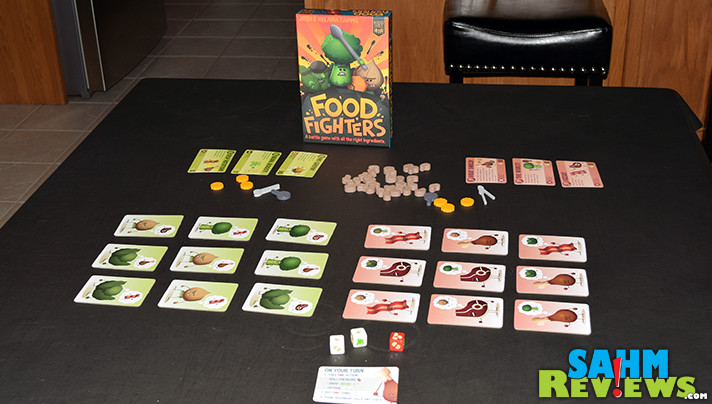 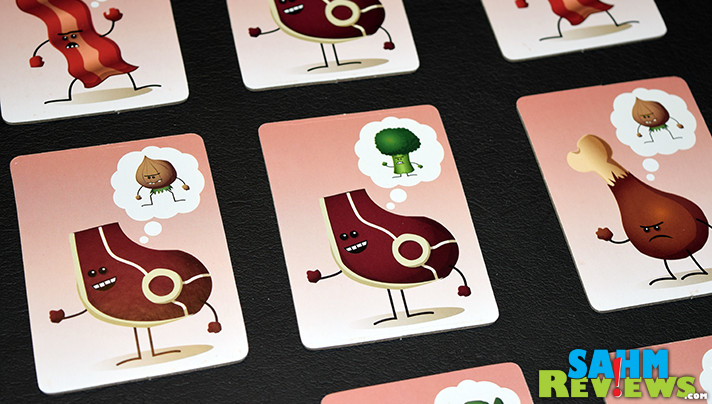 The game includes a team of vegetables and a team of meats, each with their mind set on splatting someone on the opposing side. Using tools found in the game’s pantry along with some rolling skills, you attempt to knock out the players on the other team who are either directly across from or directly diagonal from your fighter. 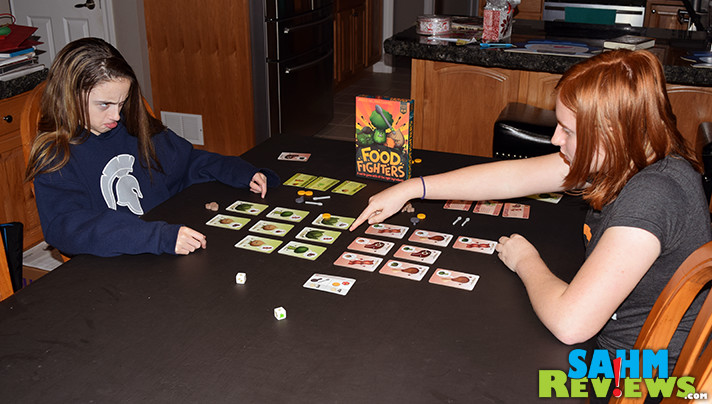 On your turn, you’ll either roll for beans, swap or attack. When you roll for beans, you roll the dice and collect the beans displayed on the dice. If you roll a splat, re-roll it until it shows beans. Swapping involves strategically moving your cards. You may swap the position of any two cards or move one card from one row to an open space in that same row. Attacking is where the meat of the game is. First, you acknowledge which of your fighters is attacking which opponent. As I previously mentioned, it has to be across from or diagonal from that fighter AND the attacker needs to be thinking of that type! Roll the dice and if you reveal a splat, you remove the card from the tableau. At the end of your turn, your opponent fills in the empty spot with a card further back. 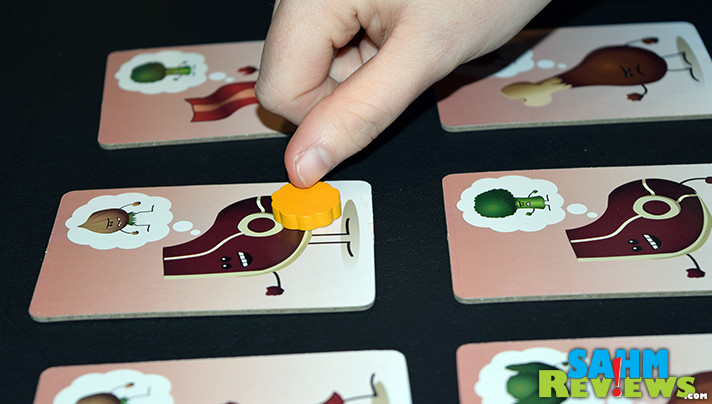 The exception is if the defender holds a shield. In that case, it takes two splats to defeat him! How can a piece of food hold a shield? Good question! The pantry is filled with spoons (for extending your reach), crackers (to use as shields), pans (that allow the attacker to go after any character) and power cards that have a variety of abilities. When one player collects three matching opponents, the food fight is over! Food Fighters is currently available on Amazon or direct from the Kids Table Board Gaming website. 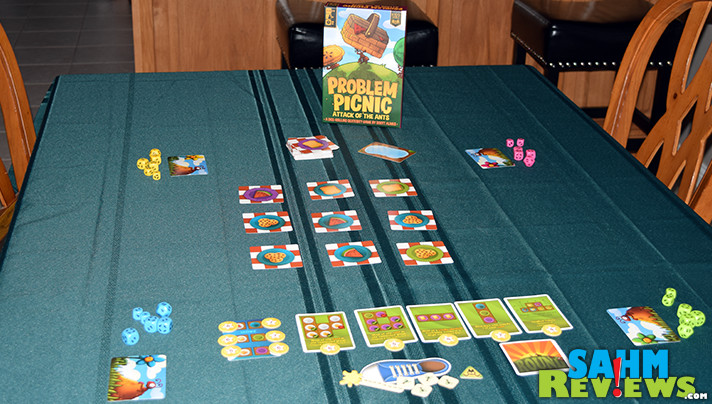 Problem Picnic Attack of the Ants

The newer game, Problem Picnic is a combination of a dice rolling game and a dexterity game. Up to 4 players are rolling 3 sizes of dice, which represent ants, and landing on various types and colors of food cards at the picnic. All food that is collected will help develop your colony which is what will be used to determine the winner. Each player selects a color and the 6 associated dice: 1 soldier ant (a large D10 die), 3 worker ants (medium D6 dice) and 2 scouts (small D6 dice) – each with varying numbers of ants displayed on the dice faces. The food cards are placed in the center of the play area with the number of cards determined by the quantity of players. Each food card displays a combination of one of 3 colors of plates along with one of three types of food. 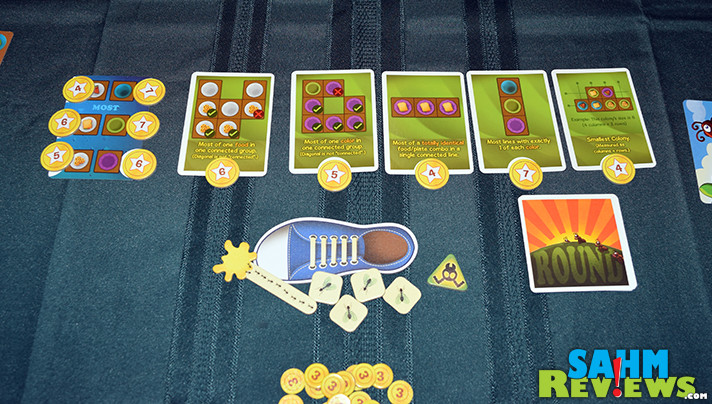 At the beginning of the game, scoring cards are randomly selected and scoring tokens are randomly added to establish a range of end-game goals. These goals may include collecting the most of a color of plate, most number of something in a row in their colony or even the smallest colony. There are more cards than what are used per game so this extends the replay value of the game by ensuring it’s different each time. You may be wondering what makes a colony. I’ll get back to that in a minute. Before that, we need to figure out how to get the food in the first place. 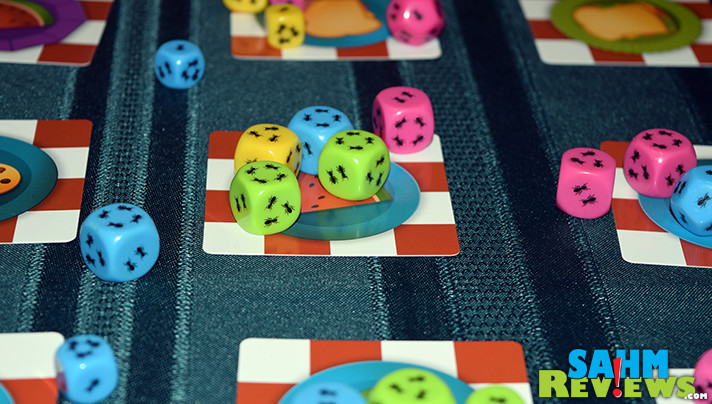 Players take turns rolling their dice in an attempt to end the round with the most ants ready to carry the plate away. Which plate do you want? Well, you can shoot for one that helps meet the requirements on the goal cards, but it’s a dexterity game so what you want and what you land on may be two different things. At least for me, they are. As you throw your dice, you’ll not only want to aim for specific plates, but you’ll also want to push other ants off them! All is fair in love and picnics. After everyone has rolled all their available dice, each plate is evaluated and the player with the most ants on that plate gets to claim the card to add to their colony. But those ants that carried away the plate had to work hard and must report to the Puddle to refresh for a turn.

I previously mentioned the three different types of ants (dice). Each has advantages and disadvantages. You only have one soldier worker which is large and difficult to get bullied from the plate it lands on. A soldier is strong and can return home to the anthill after collecting a plate without needing to go to the Puddle for water like the other types of ants. The worker ants are represented by the normal-sized dice, but each displays more ants than the other two types. As a result, when you deploy a worker ant, it has higher chance of claiming the plate it lands on. Two Scouts are great at collecting but they’re smaller and are easily bullied by larger ants. Unlike with other dice, if a Scout lands on the picnic space instead of a plate, you can re-roll it once per turn! 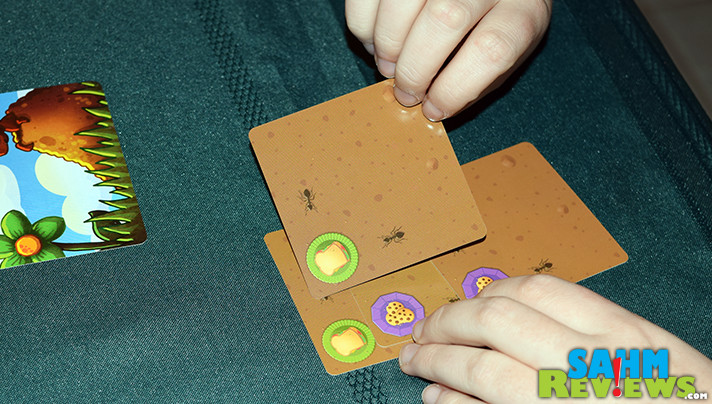 Now that you understand how the ants win the plates, we can talk about the colony. As you claim cards, you add them to the space in front of you on the table, creating a tableau that represents your colony. Each time you add another card, it needs to be connected with one already in your colony. The goal is to place them in ways that allow you to meet the end-game scoring cards. At the end of each round, the player who collected the least amount of plates becomes the new starting player and takes a Round card and the ability to use any referenced action tokens. Play continues until there are no longer any Round cards available to be claimed. The game immediately ends and colonies are evaluated based on the goals. If you have the most of one of the goals, you earn the scoring token on it. Once all scoring cards are awarded, the final scores are calculated and the player with the most overall points wins! You can pick up a copy of Problem Picnic on Amazon for under $22.

Both of these games from Kids Table Board Gaming are simple to learn and great for families, but also offer enough strategy and skill that adults will enjoy them as well. Food Fights and Picnics… what’s not to love about that? Learn about the next game they are releasing by visiting their website or following along with them on Facebook and Twitter.

Do you have positive memories of sitting at the kids’ table?

17 thoughts on “We Cordially Invite You to the Kids Table”