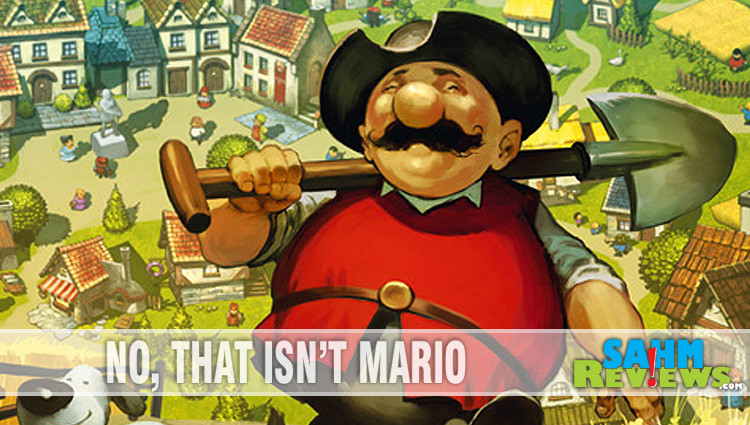 It almost starts as a joke. “A Japanese man, a Roman, an Egyptian and a Barbarian are walking through the town…” But Imperial Settlers by Portal Games is no joke at all. In fact, I’ll go out on a limb and say it is my current favorite city-building game. I rarely (if ever) call a particular game my favorite, so that should give you an idea of how much we enjoy this game.

We croon about how much I love abstract games while Nicole revels in dice games. There’s another type of more complex game we both enjoy playing, and that’s a genre typically referred to as “city-building”. This generic term usually refers to each player independently trying to build the biggest/most productive/prettiest/etc. city while preventing their opponents from doing the same. A good example of another similar title we’ve enjoyed is Mayfair Games’ Oh My Goods!

This small-box card game packed a huge punch of complexity into the tiny package. It utilized the best mechanics of a full-sized euro strategy game to give serious players something they could take with them while travelling or sneak into family game night without scaring off the relatives. To this day it is a regular staple in our game bag. 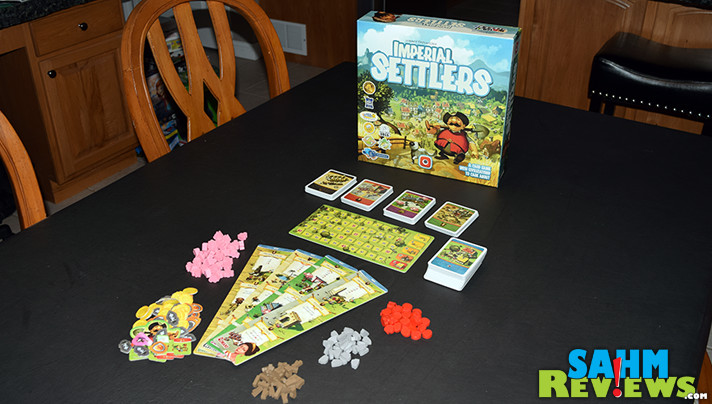 Today, however, its prominent position in our tote has been supplanted by Imperial Settlers. Originally published in 2014 and since updated with a number of expansions, I have to sheepishly admit that until recently I had never had the chance to play. Now I know I was missing out.

Imperial Settlers is a city-building game in its truest sense. Set in a fictional world where the four major world powers have discovered a brand new land, the Japanese, Romans, Barbarians and Egyptians all begin constructing buildings to strengthen their economy and expand their empires. They quickly discover that the new area is too small for everyone and war ensues.

Each player takes on the role of a leader of one of the four factions. An included feature – the asymmetrical faction boards may be flipped over to reveal a leader of the opposite sex, each having the exact same powers! You’ll also find a score board, faction markets, various tokens and over 200 cards divided among the factions and common cards. Faction cards have their own unique abilities and matches up with the faction board you chose at the beginning of the game. 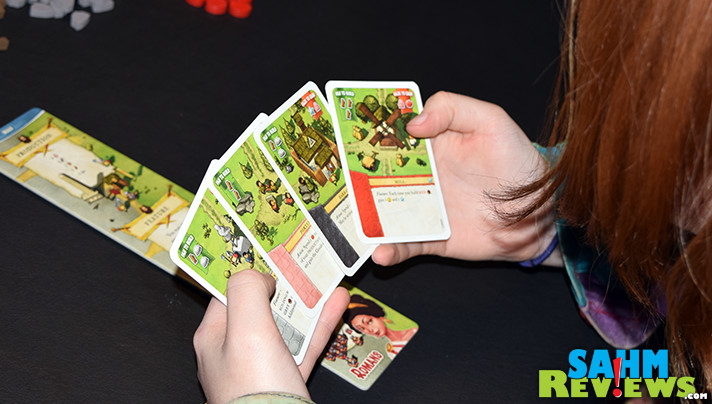 The entire game is played over five rounds, with each round being divided into four phases. First, players add to their hand of cards by drawing one from their faction deck and then selecting two additional common cards round-robin style from randomly-dealt cards. These are added to their hand (each player begins with four – 2 from their faction deck and the rest from the common deck) and have various uses. 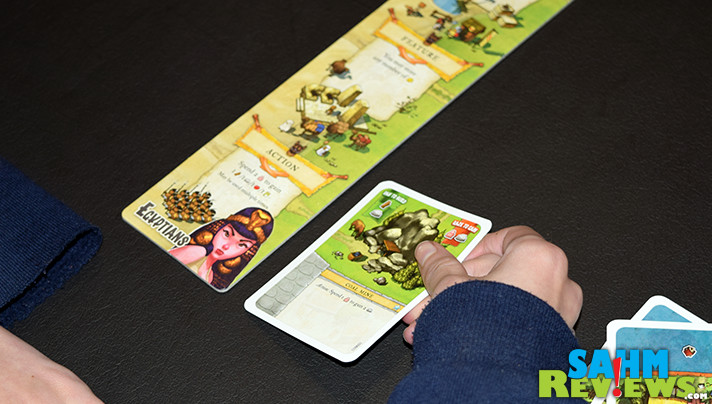 All cards can be used as built locations in the player’s new city by simply paying the building cost listed on its face. These can be activated, again by paying the cost, to award victory points, additional goods or even additional cards! Much like most games in this genre, Imperial Settlers uses this “engine building” feature to encourage you to build structures that compliment each other (use one building to produce stone, then spend the stone in another building to buy victory points, as an example). 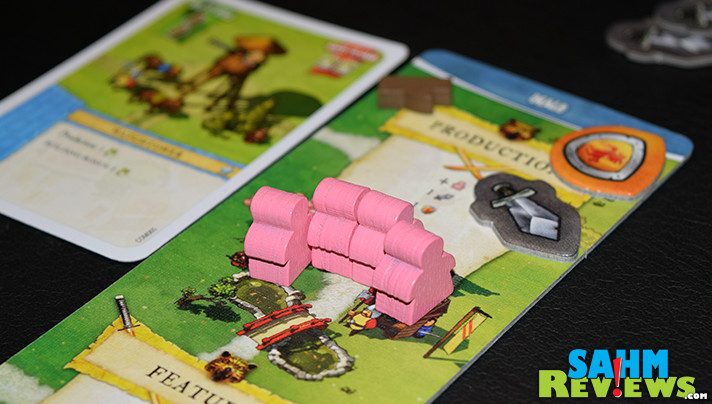 Faction cards can also be used to “Make a Deal”. By paying a food to the bank, you gain the resource listed on the bottom of the card and it is then placed under your faction board. For all subsequent rounds you will also gain that resource for free, although you do lose the ability to build that card. 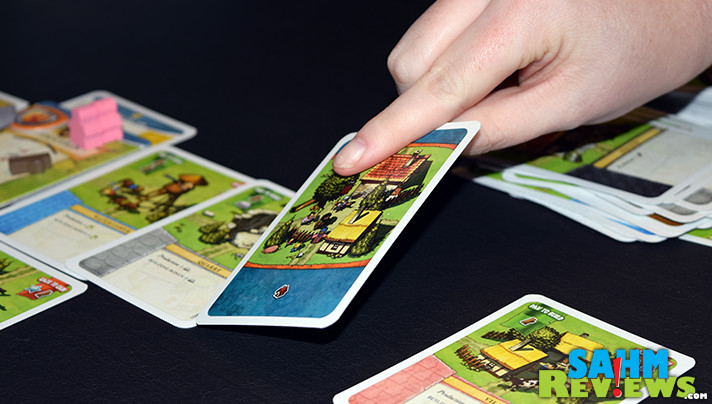 Common cards can be razed (destroyed) to immediately gain the goods depicted. You may raze cards from your own hand or an opponent’s city! Pay one Raze Token (two if razing an opponent’s location) and collect the listed goods. 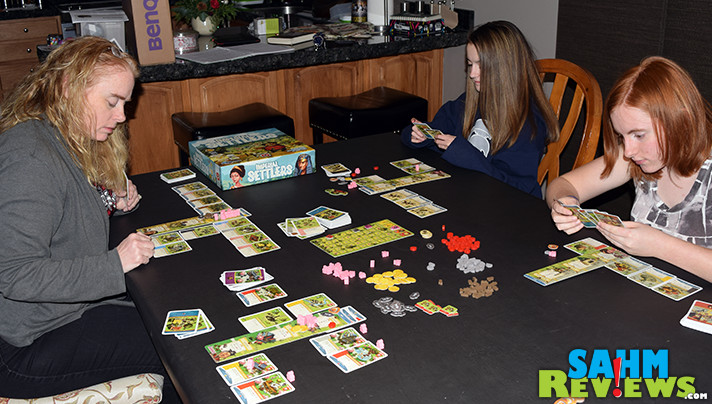 Lastly, workers (meeples) can be exchanged for additional goods or cards. Players take turns completing these various actions and there is no limit to how many actions you can take or how many times you can perform the same action as long as you have the resources needed to complete the transaction. When you have exhausted your possible actions, or choose not to perform any more, you simply “pass”. When all players have passed, the final stage of the round (cleanup) is resolved.

You may choose to store goods for the next round as long as you have storage space on your faction board or your buildings. Any that you don’t have room for are discarded and the first player token is passed to the next person clockwise. The round marker is moved up one and the next round is resolved in exactly the same manner as the previous! 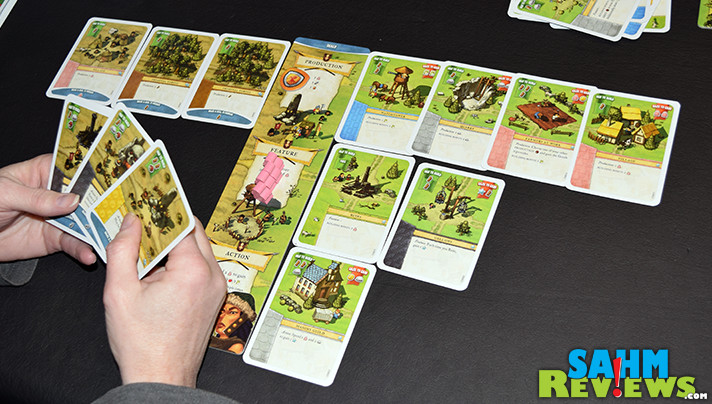 After the fifth round, each player tallies their final score by adding one VP for each common location built and two for each faction location. As the game progresses, you earn victory points and these final points are added to that total. The player with the highest number of victory points after they have all been totaled wins Imperial Settlers!

What makes Imperial Settlers our new favorite in this genre? Light engine-building introduces new players to this type of game without overwhelming them. Asymmetrical factions means it will be a while until you master the game since someone else might grab your favorite. Light-to-medium complexity means you’ll be up and playing in a shorter-than-normal time for a euro-styled game. And an overall playing time of under 90 minutes is perfect for most new and hard-core gamers.

At under $40 on Amazon, I believe it will be a while until Imperial Settlers is knocked off our throne for our favorite city-building game. Now that we’ve had the chance to finally try out this 3yr-old title, we can’t wait to give one or two of the expansions a shot. If and when we do, we’ll be sure to update this post to let you know what they add to the game play!

In the meantime, check out Portal Games’ Facebook and Twitter feeds as they have a couple exciting things in the works. One is an expansion to their very popular game, Cry Havoc, and another is a brand new game, Alien Artifacts. We’ve never played either, but if we ever do, we’ll be sure to tell you about them!

And if you ever want to learn more about hobby board games and how they’re developed, check out the podcast by Portal Games’ founder, Ignacy Trzewiczek, and Stephen Buonocore, owner of Stronghold Games (Frogriders, Flamme Rouge, Survive: Space Attack). We’ve found it super-informative and extremely entertaining!

Which faction would you pick? Japanese, Barbarians, Romans or Egyptians?