For most people who play board games as a family, little thought is given to who actually created the game. Sure, we know the names of the publishers like Milton Bradley or Hasbro, but rarely are we given any information about the person or persons behind the actual creation. Such is the downside of buying games from mega-corporations.

I think that’s what we like about the hobby game world. Not only can we follow a favorite publisher, we also get to know exactly who worked on the project thanks to their names being listed either on the box or somewhere inside the rulebook. From the game’s designer to the artist, right down to the people that proofread the copy, everyone gets a slice of celebrity. No, the credits aren’t as long as a Marvel movie…

Over the years I have developed a short list of designers that I follow religiously. If there is a hint that they’re working on a new game, I’ll search for as much information as I can about the project. Two of my favorites are Stefan Feld and Uwe Rosenberg, names I’m sure you’ve never heard of. Both have scores of games under their belts and nearly all have stood the test of time, many being reissued over a decade later due to high demand for out-of-print titles.

One thing you may not realize about the hobby board game industry is that most of the game designers are freelance. They design a game, pitch it to publishers whose catalog closely matches the characteristics of this new title and then receive a signing fee and royalties. This frees them up to work on their next project. I’ve always said that good board game designers are artists in their own right, and you certainly wouldn’t want them to waste their time on sales & marketing when they could be working on the next great game. This system works very well in this industry.

Because of the freelance nature, following one publisher won’t expose you to all of the games designed by one designer. Feld and Rosenberg might have their preferred publishers, but they both have licensed their games to more than one for various reasons. Recently I discovered that there’s another designer that I unknowingly have gravitated towards simply because of how fun his games are. Hisashi Hayashi and his games have already made a few appearances on SahmReviews without us realizing the correlation!

First we enjoyed Sail to India by AEG on a Disney cruise we took last year. While set up in the main lobby, we had a number of people to stop and admire all the cubes we were using to track the game. In September we were playing Tasty Minstrel Games’ Okey Dokey, a cooperative title using only cards that has become a game night favorite.

Stronghold Games’ Get the Cheese was an easy selection for this years gift guide featuring card games. And at the time we were whittling down the submission ideas for our family games gift guide, we didn’t realize that Samurai Gardener by Osprey Games was also by Hisashi Hayashi! 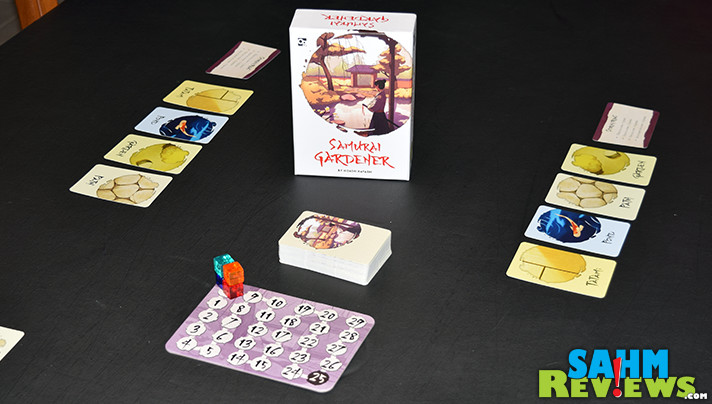 I think I’m going to coin a new phrase – “simple complexity”. It perfectly describes all of the titles we’ve played by Hisashi Hayashi to date. Samurai Gardener is no exception, and introduces an interesting mechanic not seen in his other offerings – the need to play cards partially on top of each other to be successful. Don’t worry, it’ll make sense in a minute.

In the box you’ll find a deck of 64 garden cards, 20 feature cards, 5 scoring aid cards and five colored dice-sized plastic cubes along with a scoreboard. Samurai Gardener supports up to five players and each game should last only 15-20 minutes. With those specs, you’d think this would be a rudimentary game. I assure you this is not the case.

Each player chooses a score marker (the plastic cubes) in their color preference and a set of feature cards (4 different). The garden card deck is shuffled and one card is dealt face-up in front of each player. This becomes their starting card for their growing garden and contains a 2×3 grid of garden sections of the four types (garden, pond, path or tatami). 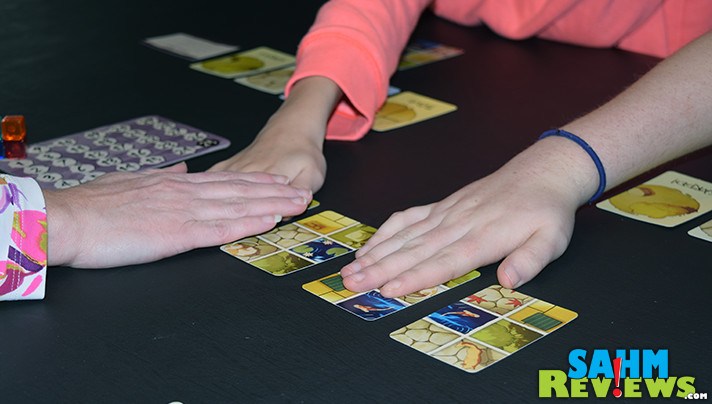 The starting player will then deal out one card per player from the deck and place them in the center of the table. They will then call out “Ei! Ei!” and everyone else will then shout “Oh!” and slap their hand on the card of their choice. If more than one player chooses the same card, the hand on the bottom will receive it and the other player(s) will need to quickly slap a different card. 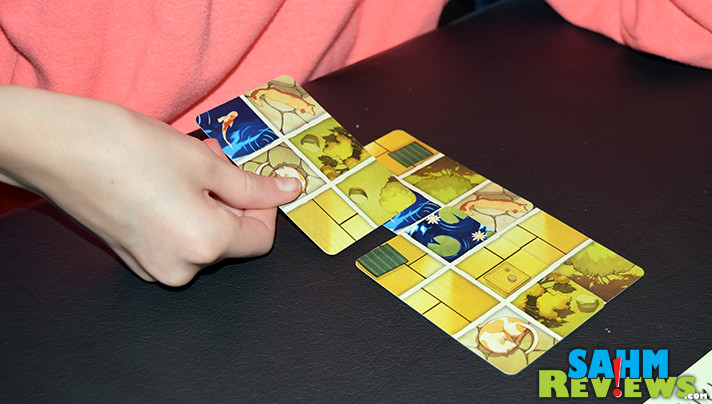 Once everyone has a card, players add it to their garden according to the game’s restrictions. Garden cards must be played vertically and must either be put directly beside or partially over another card already in your garden. When placing to the side, it must have at least one square adjacent to a square on a previously-placed card (no diagonals). If you are overlapping an earlier card (or cards), you are not allowed to place it so that it covers any part of a row or column of three or more squares of the same garden type. 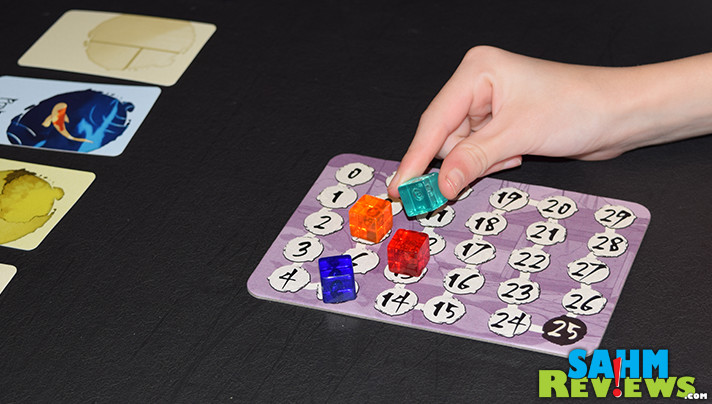 At the end of each round of garden-building, scores are tallied. You score one point for 3-in-a-row of one type, two points for 4-in-a-row, four points for 5 and six or more is worth zero! When you score a particular type of feature you turn over the matching feature card in front of you. You may not score that type of garden again until you turn all the cards back over by scoring each type. 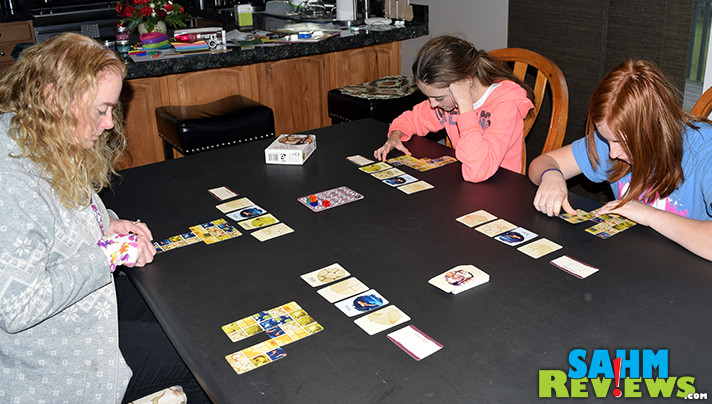 This prevents you from just scoring on one garden type and forces you to build multiple gardens. Remember, you cannot cover any 3-in-a-row, so if you’re going to place your card so it makes one, be sure you can score it! You can score as many rows in a turn as you have face-up feature cards, and if you turn over the fourth, you can flip them over right away and begin scoring additional rows! In addition, there are bonuses for scoring different types of rows in the same turn, with a maximum of six bonus points being awarded for resolving all four garden types in one turn! 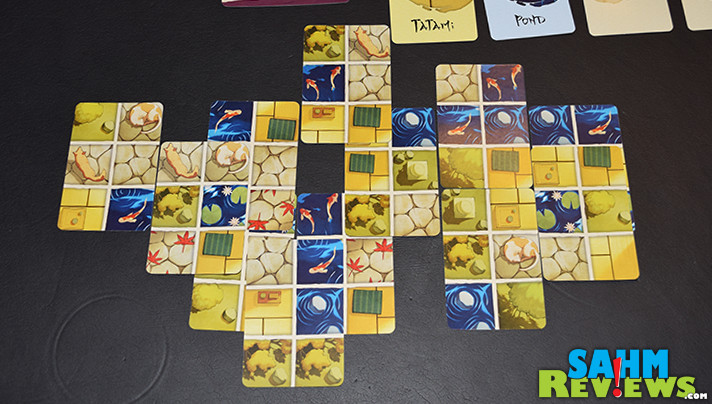 Samurai Gardener continues into new rounds until one player reaches a score total of 25 points or more. If more than one player achieves that level, the person with the higher total score is the overall winner (ties are ties). To keep things fair when you’re playing with younger players, you can choose to let them ignore the feature cards and simply score anything they construct, while you are still limited to the original rules.

As I’m sure you can visualize, Samurai Gardener is super simple in its gameplay, but will require a forward-thinking mindset while building your garden. Knowing when to score a row to maximize points gained, but still making sure you’re in the running, will be key to your horticulture success.

At under $20, Samurai Gardener is one of (if not the) best game values put forth by Hisashi Hayashi to date. You can find your copy over on Amazon or direct from Osprey Games on their website. We also recently learned from their social media feeds (Facebook, Twitter) that February will bring a new title by another favorite designer, Reiner Knizia, entitled “Sakura“. We can’t wait to learn more about it! In the meantime, watch our daily giveaways in our 150+ Days of Giveaways series. You’ll have a chance of winning your own copy of Samurai Gardener on day #73!

What would you plant in your Samurai garden?