I should know better, but I made a rookie mistake when comparing a couple card games we own. I’ve said before not to judge a book (game) by its cover (box), but I did just that. A little over a month ago we featured a brand new game by Osprey Games called Samurai Gardener. In that game you are competing to create a beautiful Japanese garden, scoring along the way by lining up garden areas that match.

The most glaring element of the game’s design is the playing cards, which are divided into six different areas – some matching, most not. You will use these cards to build your garden and may cover other garden areas in order to line up the garden type you are working on. We liked it so much that we’re giving away a copy in Day 73 of our annual giveaways in conjunction with our Holiday Gift Guides!

When I first saw a copy of Honshu by Renegade Game Studios and noticed the similar six-segments cards (and a Japanese theme), I erroneously assumed it was almost the exact same game. Sure, it is set in Japan and the cards are divided up into six equal areas, but that’s where the similarities end. And it’s a good thing we took a second look at Honshu as it is a LOT of game in a little box! 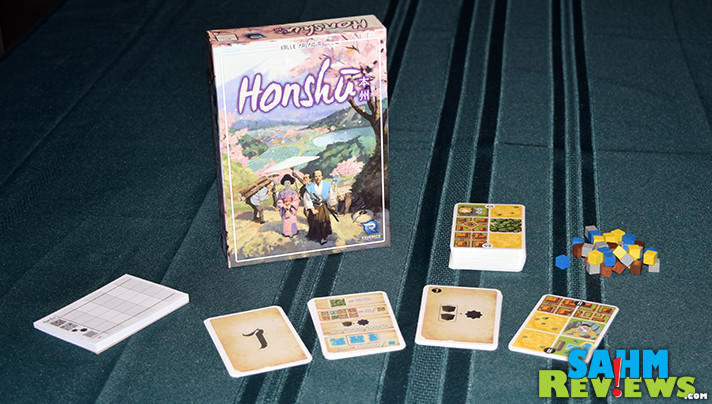 In Honshu you are not creating a garden, but a map of a newly-born city. You are a lord/lady of a Noble house in feudal Japan and wish to construct the best city plan (map) of all other other houses. Honshu is played over twelve rounds, each taking only a couple minutes. While twelve rounds sounds like it would make for a long game, even with the full compliment of five players, you can expect an entire game to last only 30 minutes!

From the 84 included cards, shuffle the 60 Map cards and deal out six to each player. Everyone also gets a starting Province card dealt at random, a Scoring Summary card to remind you of your goals and a Player Order card to keep track of whose turn is next. There are also optional End-of-Game Scoring cards that add unique goals for each player. Each player receives one of these, also given randomly, and we highly recommend using them as they add another layer of complexity to the game. 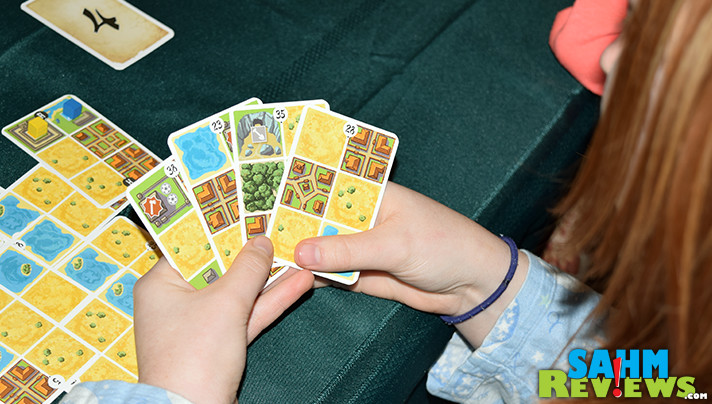 Each round takes place in only two phases. The first is called the “Card Selection Phase” and actually requires a bit of thought and strategy. Each player in turn order will play a card to the center of the table from their hand. These cards have a number printed on the top, with the highest number played being awarded the first player card (second highest gets the second card, and so on). Once everyone has played one card and the new player order is determined, the starting player gets to choose one of the cards from the center to add to their map. 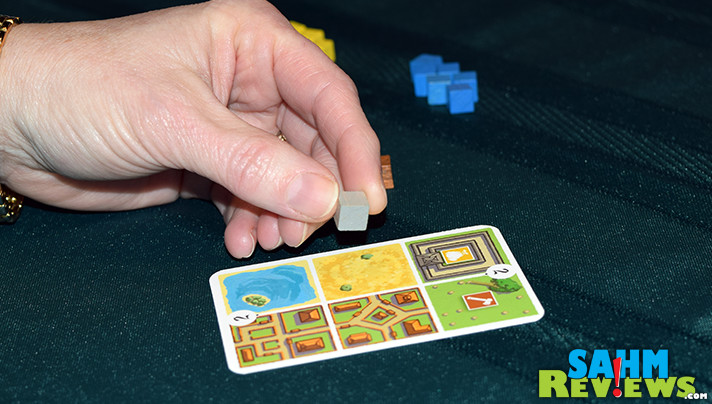 When you submit a card to the center, you may also add a production cube of your choice to the card, adding a value of 60 to the number on the card. With this method you can almost guarantee your position for choosing a card, but at the cost of a precious resource. The first person to “bid” with a resource added to their card sets the resource type for that round. Meaning, if anyone else wishes to add sixty to their bid value, they must do so with the same color of resource that was originally played. A shrewd player will take notice of what resources other players have in order to shut them out of increased bidding! 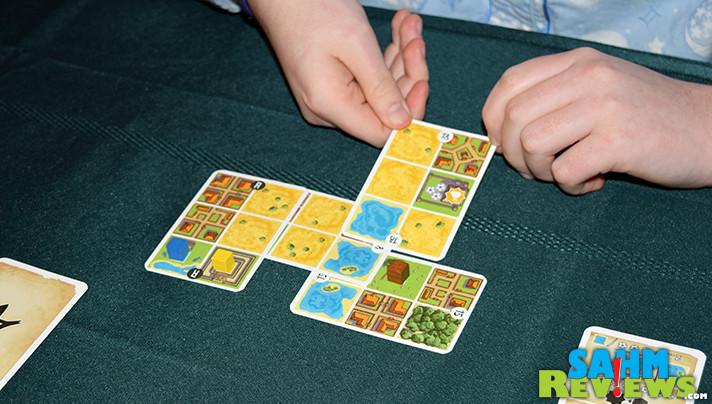 When you collect your chosen card from the center during the second (Building) phase, place it on your map but keeping in mind the following rules and restrictions. First, you must always either cover at least one square from a previously-placed card or tuck one square of your new card underneath an old card. You also may never cover or hide any lake squares (you can’t build on lakes). If there are any production symbols on your newly-placed card, you gain a free resource matching the color of the square. 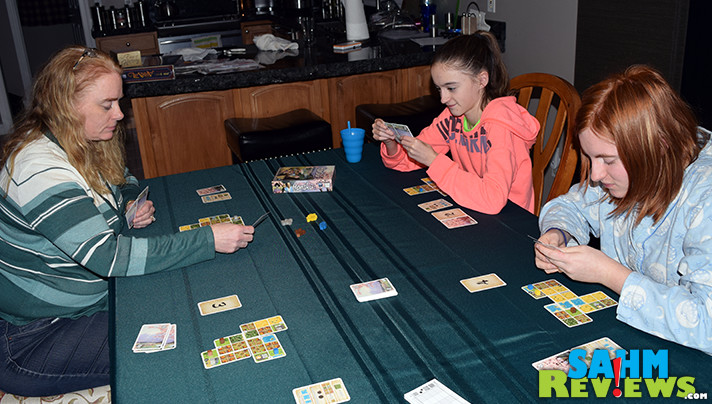 And that’s all there is to a round of Honshu. Two more identical rounds are played, bringing your hand count down to three cards. At that point everyone passes their hand to the person on their left and three more rounds are played until everyone has no more cards. Six more cards are dealt to each person, three rounds played, and then hands are again passed, but this time to the right. Once the final three rounds are complete, final scores are tallied. 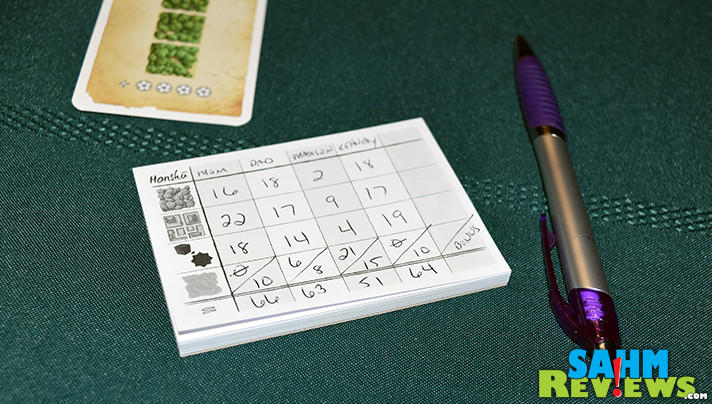 So how do you score in Honshu? Along the way hopefully you have been paying attention to your Scoring Summary cards and see that you will receive two points for every visible forest square. You’ll also be awarded one point for every town square in your largest connected town. Lakes by themselves are worth nothing, but for each additional connected lake you will receive three points! Factory squares will score 2/3/4 points depending on the card, and activate only if you have a matching resource still on your map (meaning you didn’t spend it to bid on player order). As you would imagine, desert areas are worthless and only used as a tie breaker. 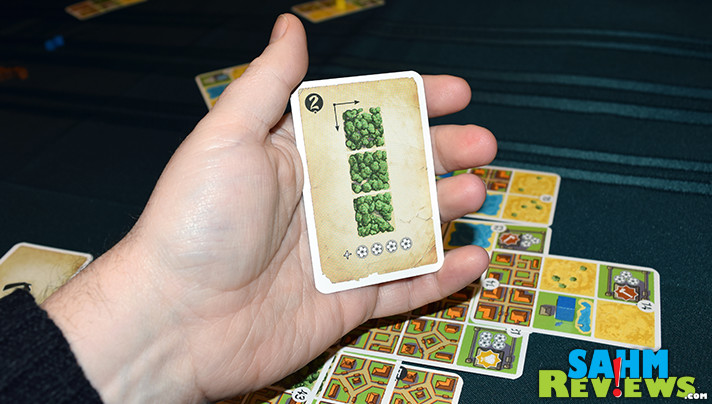 Add up all your scoring types, not forgetting to check if you completed your personal End-of-Game goal and adding that value, and the player with the highest overall total wins Honshu! There appears to have been a small oversight by the publishers as there is no space on the scoresheet dedicated to the optional End-of-Game cards. As you can see from our tallies, first through third place was separated by a mere three points! However, if we had tied, the player with the most deserts still showing in their map would have been the victor!

While I’m off writing “I will not judge a book by its cover” 100 times on the blackboard, pick up your copy of Honshu on Amazon for under $20 shipped! You’ll be hard-pressed to find an inexpensive game that offers more strategy and complexity, something that Renegade Game Studios tries to implement in nearly all of their title. Be sure to check out their website along with their Facebook and Twitter feeds to find out about upcoming releases. In particular, take note of the newly-released Topiary which we’ll be featuring next month!

What is your favorite Japanese-themed game?