Can I let you in on a little secret? Sometimes I get a bit obsessive. Not in the colors-in-the-right-order kind of way, but more like do it until it’s perfect even at the cost of something else that needs attention. There are stacks of “stuff” around the house that bother me but don’t take priority, but if someone leaves a glass on the counter instead of putting it in the dirty dishwasher, I’ll stop what I’m doing to go put it away. I can be found hand-washing dishes multiple times a day because I don’t like them sitting on the counter. It’s petty, but it is what it is. We all have our idiosyncrasies.

Everyone once in a while I’ll get obsessed with something of leisure that will consume my time. I’ll get engrossed in finishing a book series (hello, Hunger Games), watching a TV series (thanks, Netflix), or playing an app (I had to uninstall Star Realms and some other board games from my iPad!) to the extent that I’m not getting my work or chores done. Never was it more apparent than when I was introduced to Trog at the arcade when I was visiting my brother-in-law in Alabama way back in the early 90’s. I was perfectly happy pluncking quarters into that machine because the game was pretty awesome. I was so obsessed that Scott bought the PC version when it came out and even had to pull me away from the arcade unit when we found it at DisneyQuest a number of years ago. 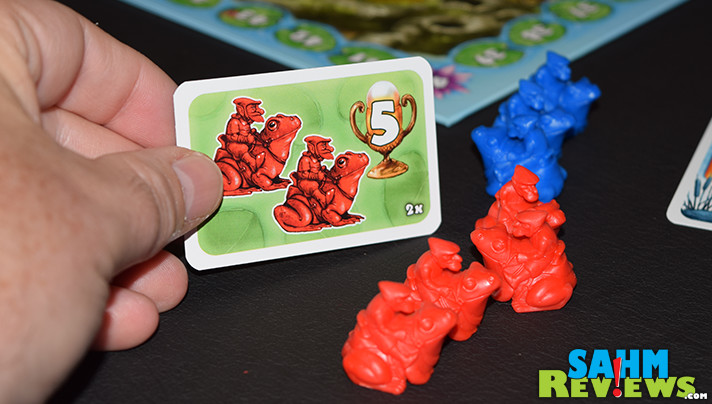 When I saw Frogriders in the Stronghold Games booth at Geekway, Trog is the first thing I thought of. The pieces don’t really resemble my beloved arcade game, but there’s just something about it that struck me. Maybe how colorful it is or the giant on the instructions and the likeness to the Trog caveman. I don’t know. Whatever the reason, I was drawn in by some familiarity and, well, here we are.

The pieces are pretty adorkable, don’t you think? 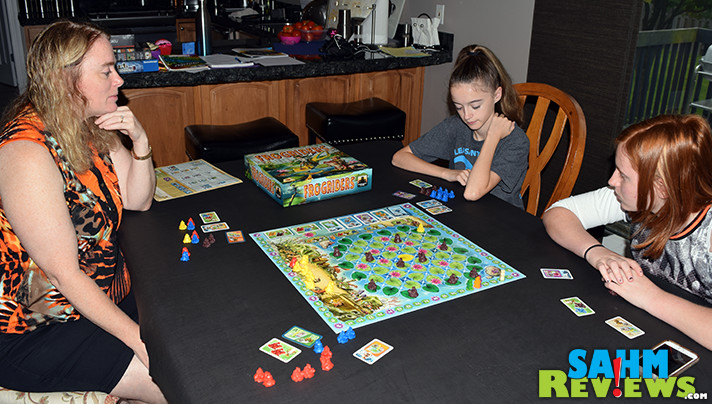 We sat down and played it at Geekway and I was sold. Let me give you a quick rundown on Frogriders. You belong to a tribe of frog-riding warrior elves. Using special abilities when mounted on frogs, your ancestors were able to defeat an army of giants, allowing your people to live peacefully ever since. As a tribute, there’s an annual tournament where you and other frogriders compete to claim the title of greatest tactician. Trophy points can be earned through private and public goals, set collection, number of units and privilege. The goal of Frogriders is have the most trophy points when the pond is cleared of riders or no valid moves remain. 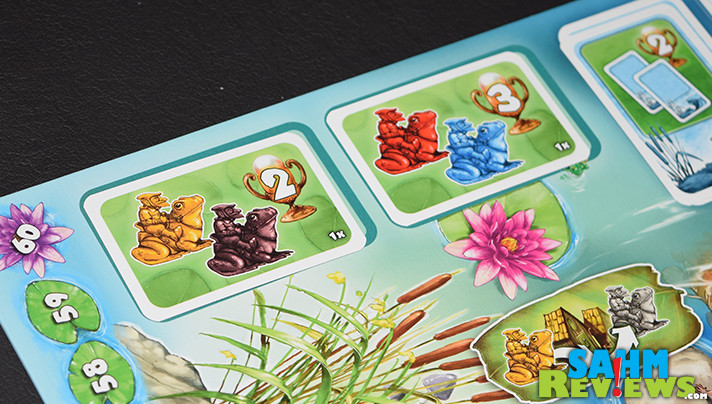 The board is comprised of armies of different colors, each maintaining a different ability. Brown frogriders have no special ability but award a trophy point at the end of the game. Red units allow the player to take an extra action. Yellow frogriders can be exchanged for another color frogrider and blue ones can be turned in for privilege cards. What’s a privilege card, you ask? They are cards you can acquire that give you some side goals or abilities to make moves that your opponents cannot. 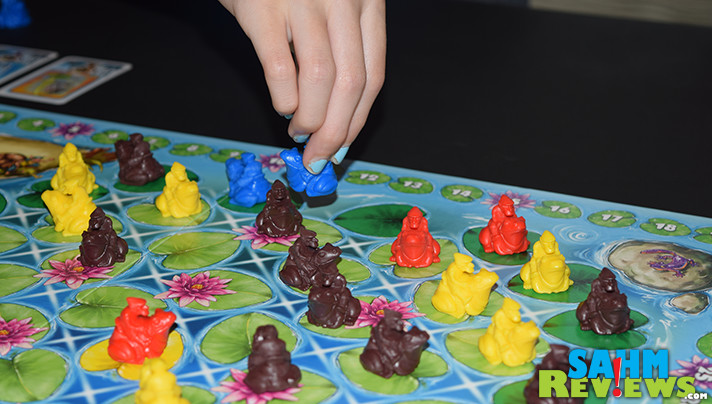 If you’ve ever played a peg-jumping game, you have the basis of Frogriders already under your belt. On your turn, there are only two options. One is required and the other optional. If there’s a valid leap, you have to take it. If there are multiple available moves, you can select which works best for your goals. If there are no available actions, the game is over. The optional action involves returning riders to their village in exchange for use of their ability.

Explanation done, let’s play! Well, sort of. There’s a bit more to it than JUST a peg-jumping game. The colors of frogs you acquire make a huge difference. At the beginning of the game, each player will have one unique personal goal. Your goal may award you five trophy points for leaping and collecting two red frogriders while your opponent may be trying to get a combination of one of each color frogrider for five trophy points. Likewise, there are public goals that everyone is trying to achieve. Each frogrider can be applied to multiple goal cards so if you’re savvy, you’ll be able to combo your private and public goals! You have to not only be strategic about which you leap and collect, but also which ones you return to the village to use their bonus. 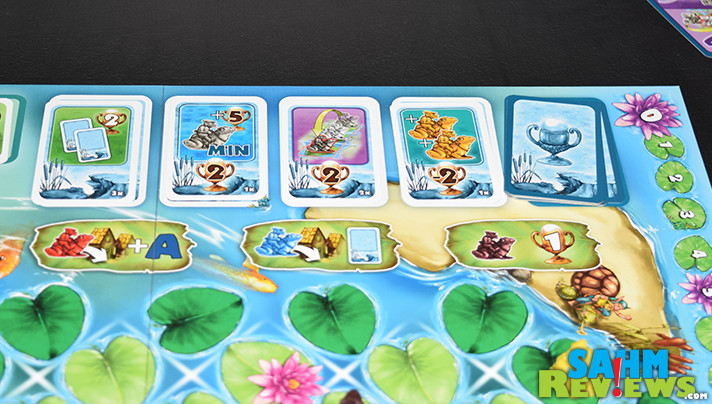 Then there’s the matter of those privilege cards I told you about. Some allow you to earn a set number of trophy points while others score based on various abilities. Orange cards allow players to move “illegally”. As an example, one gives the card owner the option of jumping diagonally while another can get a running start. Purple boxes alter the unit you collect or award a trophy point if your rider lands on a space with a flower. There are six different types of privilege cards so you get the idea on the variety of ways these cards can alter the game. Oh, by the way, some have bonuses but give you negative trophy points!

As soon as there is no longer a valid move for a player, the game ends and scoring begins. First you’ll reveal your private goal and score it followed by scoring of each public goal card. Next, you’ll earn one trophy point for each brown unit. They don’t have abilities like the red, blue and yellow, but they do score points! Finally, the privilege cards are scored. The person with the most wins, of course.

With so few options on what can be done, the gameplay is very quick. While it isn’t complex, don’t mistake that for lacking in strategy. There are multiple paths to victory and it’s important that you pay attention to your own goals as well as what your opponents are collecting. Leap over to Stronghold Games’ website for more information on Frogriders or hop onto their Twitter or Facebook pages for updates on other games. They offer a variety of richly complex games as well as some lighter ones for the whole family. You can pick up a copy of Frogriders on Amazon for under $40, direct from Stronghold Games or check your local game store. Oh yeah, you can also enter to win a copy right here!

25 thoughts on “Frogriders Board Game Overview”