It isn’t often that we find a game at thrift that is both a puzzle and a game at the same time. Of course, we’ve talked about offerings from ThinkFun and their amazing line of single-player puzzle challenges, but this week’s Thrift Treasure supports up to four players! Keep reading, because we think you’ll be impressed with how the game works. I know we were. 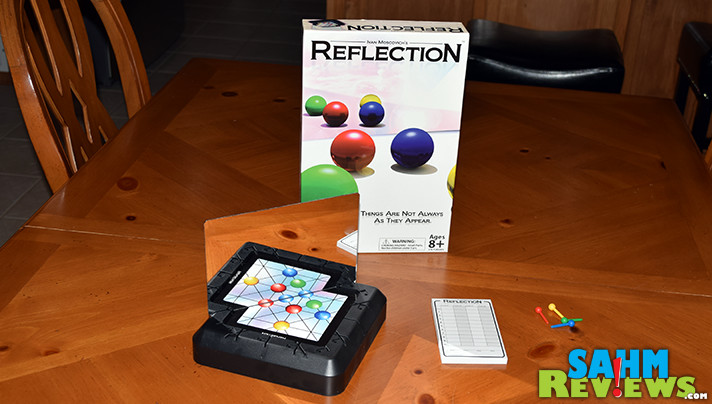 Reflection by Fat Brain Toy Co. is certainly the first game we’ve ever owned that includes a separate mirror to be used in a game. The closest thing we’ve seen previously is one of the very first Thrift Treasure games we ever featured back in 2014, Laser Khet 2.0. It had tiny mirrors embedded in the pieces and you bounced a laser off of them trying to ‘shoot’ your opponent’s pieces. Reflection is a very different game. 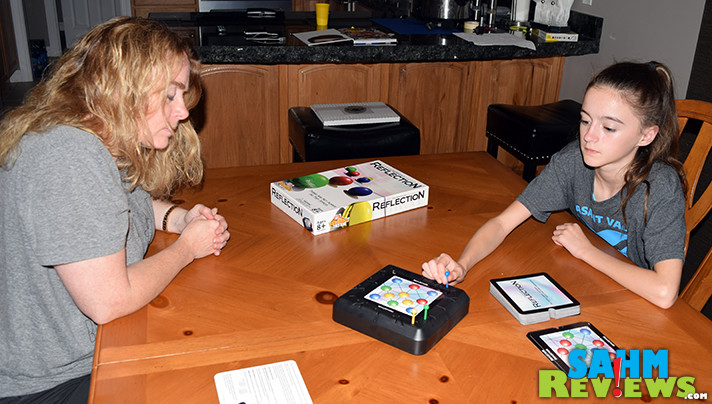 Like most games, the goal of Reflection is to score as many points as you can. In this case it is over the course of ten rounds, each lasting just a couple minutes. The game includes a stack of sixty challenge cards with spheres of varying colors on them (note – it sure would have been nice to have double-sided cards! Twice as many for the same price!). 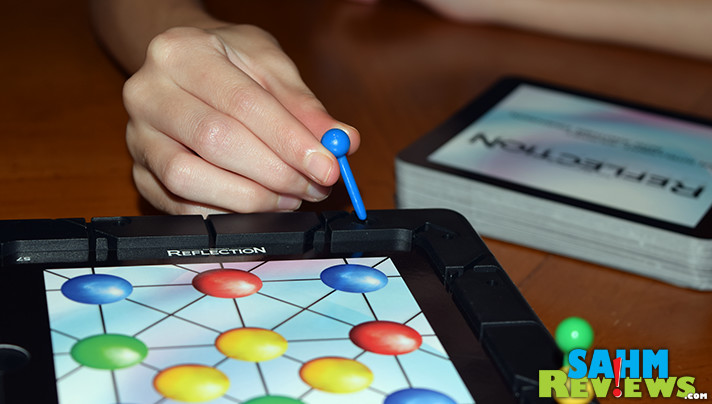 One card is chosen at the beginning of the round and placed into the plastic holder in the center of the play area. At this time the mirror is set to the side. Each player must then choose an axis (line) by placing their peg in the corresponding hole in the holder. There are limited spots, so players must rush to beat each other to the space! 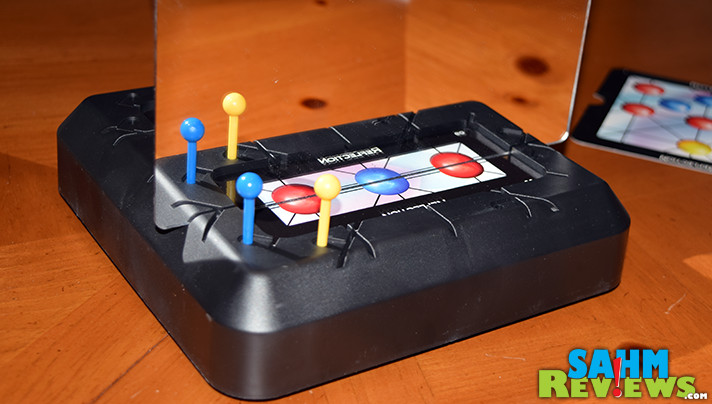 After all players have placed their pegs, in turn the mirror is set along each axis the players have chosen. This extends the size of the challenge card by duplicating a portion of it. A player’s score is totaled in the following manner: One point for each green sphere, minus one point for each yellow. Then add the difference between the number of red and blue spheres. Another card is then chosen and the next round begins. Again, scores are kept for ten rounds and the player with the highest total score is the overall winner!

As you might have already figured out, visualizing the board with the mirror in place is the key to success in Reflection. You need to be able to quickly determine the optimum spot to place the mirror and grab the one space it corresponds to. Sitting on different sides of the board can certainly affect your ability to spot the best axis, and you have to remember the mirror is reflective on only one side!

Quite a unique little abstract game with features we don’t have in any other games in our collection. Copies are still available on Amazon for around $13 shipped or you can do like we did and keep an eye out for one at thrift! Although rated for ages 8+, it should be easily played by children as young as six or seven, so don’t let that scare you away.

What do you think of this interesting use of a mirror in a game?