Imagine the classic game of chess. But with lasers! Yes, lasers! A mix of old and new makes up our latest thrift find:  Laser Khet 2.0

We had seen this game for sale on the store shelves, but at $39.99 couldn’t justify the price not knowing if the girls would be into it. Boy were we wrong! Fortunately this nearly-new copy only ran $3.38 at the local Goodwill and it sure was money well spent. 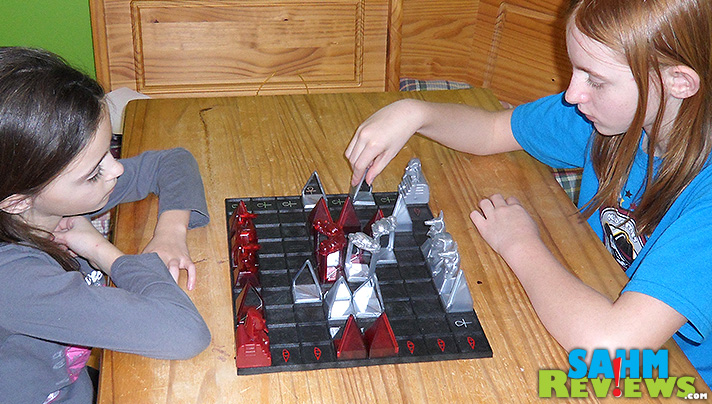 There are different ways to officially set up your pieces to begin the game.  Shown here is the basic setup and the various pieces.  In a nutshell, your object is to utilize all the Egyptian-themed pieces to either block or reflect (using mirrors) your laser beam and shoot the other person’s pharaoh (king piece).

Each person takes a turn moving or turning their pieces while predicting the path of their laser. At the same time they must consider the other player’s laser and how their move will affect its path. It is possible to shoot your own pharaoh and lose the game if you’re not careful! 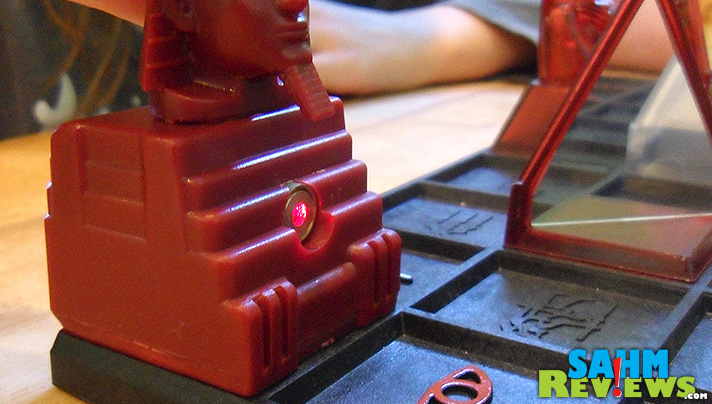 Hitting other pieces in the side will remove them from the board, regardless of the color of the piece (ie. lasers are dangerous). Game play is usually about 10-15 minutes before a pharaoh takes it in the chin.

Laser Khet 2.0 really requires a lot of forward thinking, a skill we definitely feel our girls should develop. At 9 & 11 they caught on rather quickly (too quickly, as I lost 2 out of 3 games…), and would probably be well understood by anyone 7 and up. The inclusion of two working lasers is probably the reason for the 9-99 age recommendation on the packaging.

While not an official company video, this is a great intro into how the game is played.

Among the various awards they’ve already won, probably the most prestigious is the Mensa Select National Competition Winner seal proudly displayed on both sides of the box. Learn more about Laser Khet 2.0 on their website and by following the on Facebook and Twitter. Right now they’re available on Amazon for more than 30% off!