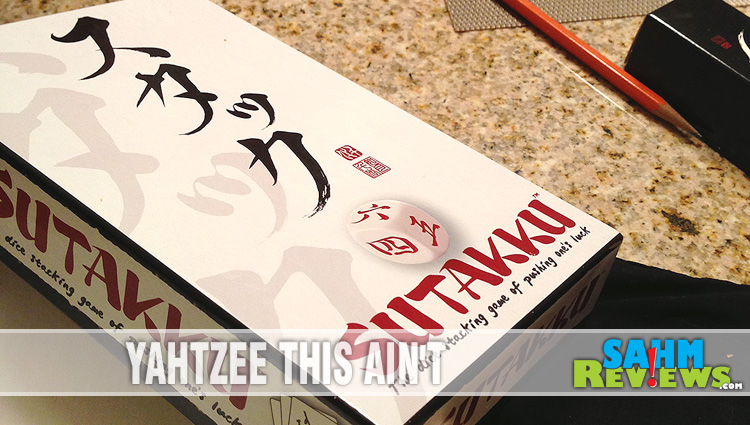 One of the great things about the Chicago Toy & Game Fair is you get to see and try out games that you won’t find in your local Walmart or Target. In 2012 we picked up a copy of an unassuming dice game called Sutakku. We did get a brief introduction to game play at the booth, but among the noise and crowd it was difficult to really digest in a short period of time.

Once we got it home we realized the portable nature of the game (which consists of only a bag of custom dice, a scoresheet pad and a cardboard playing field) was perfect for our annual trip south for the holidays. We spent the better part of an evening trying it out – over and over and over again!

The game is played in rounds and the player with the highest score after five rounds is declared the winner. Each round you’re trying to create the tallest stack of dice among the other players. During each turn you grab three dice and roll them.  Then you must decide which TWO dice you are going to add to the stack. 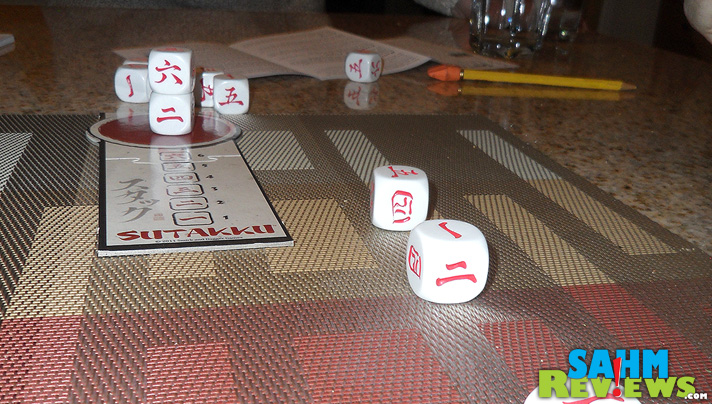 You must stack them in numeric order with the lowest going first (don’t worry, there is a handy key in the instructions to help you make heads or tails of the Japanese characters). You can only stack numbers equal to or greater than the number below it. Obviously rolling pairs gives you great advantages as you can in theory stack them up forever if you consistently roll the same numbers. It also triggers a special rule allowing you to add the third die to the stack if it is playable and you choose to do so. 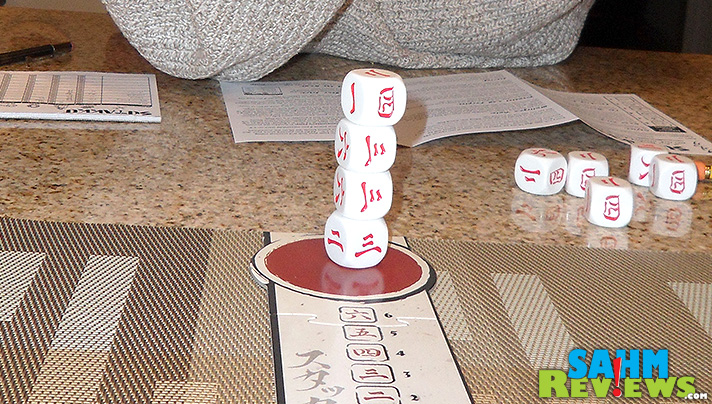 There is no penalty for knocking the stack over, but be sure to take mental note of your dice so you can recreate it if necessary. If you roll something that cannot be played (for instance you roll all 2’s and your top die is a 4), then you bust and receive no points. If you elect to stop your turn before your roll, you add up the number of dice in the stack and multiply it by the face value of the top die for your score. Play continues on with a fresh stack for the next player.

Lastly, there are some bonus points awarded for certain achievements such as “The Rule of 5”, “The Rule of 6”, “The Tower of 12” and “The Stonecutter’s Folly”. What do all of these mean? You’ll have to buy the game for yourself to find out!

Ultimately we found Sutakku to be a great party game with good replay value. It takes a good bit of luck and some mathematical strategy to be proficient at it, perfect for a drinking game if you’re the sober one! Find out more about Sutakku on their official website or by liking them on Facebook. If their other games are as engaging as this one, we look forward to trying them out!