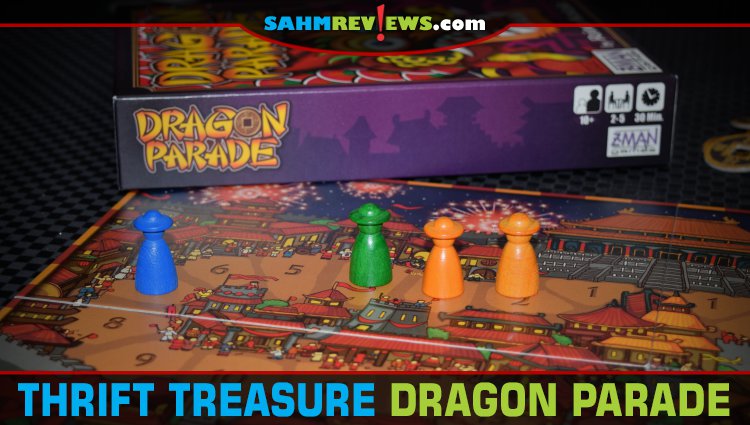 After seeing the last few weeks’ worth of Geekway to the West flea market finds, you’re probably a little bit jealous. I’m not kidding when I say we brought home two full tubs of games. Some of them have been duds, but the vast majority are keepers. This week we broke out Dragon Parade by Z-Man Games.

Two things stood out to us about this title. First, Reiner Knizia designed it. While we’ll never own every title made by Dr. Knizia, when we run across something we don’t own, it’ll usually come home with us. The second thing I noticed was Joshua Cappel was responsible for both the illustration and graphic design. This may not have meant much in 2007 when Dragon Parade was released. However, you might know his current portfolio of games by Kids Table Board Gaming where he and his wife, Helaina, run the company.

Dragon Parade is a thirty-minute game for up to five players who are trying to predict the final resting place of the Chinese dragon in the Chinese New Year parade. Each player begins the game with three Street Seller pawns in their player color and a hand of six cards dealt from the shuffled, two-suited (red and yellow) thirty-six card deck. A beautifully illustrated board is set in the center of the play area and a pile of thirty coins is set to the side.

Dragon Parade is played over several rounds equal to the number of players. Each round is technically a full game and is repeated over and over. The object is to predict where the dragon will end after all players have played four of their cards. Each card has a suit (color) and a number. The first player will play one card from their hand and move the dragon that many spaces in the direction of the color. If this causes the dragon to exit a gate on either side, the round ends immediately.

Next, that player will place one of their pawns on an open space on the board, predicting the dragon’s final resting place. The pawn may be placed on any open space with few restrictions. It cannot be placed on the “zero” spot (the Forbidden City), nor on either red or yellow gate at the end of the path. Additionally, it may not be put in a space that already has other pawns directly on both sides.

After all players have had three turns, they will have three cards left in their hands and will not have any pawns left. All participants will then discard two more cards and in order, play their final card. After all cards have been revealed, scoring for the round commences.

If a person correctly predicted where the dragon would land, they receive five coins. Anyone else who is connected to this spot in a chain will receive three points. All others who are on the correct side of the board receive one point per pawn. Pawns on the opposite side of the board never earn anything.

If no one predicted the space exactly, then the five points aren’t awarded. The pawns closest to either side of the dragon, and any connected to those in a chain, receive three points each. Others on that side still get one point each. A new round is played in the exact same manner with the role of start player passing to the left and denoted by a special dragon figure. After everyone has had a chance at being start player, the person with the most overall coins is the winner of Dragon Parade!

Although Dragon Parade is already fifteen years old, the game play still holds up today. You’re only limited by the luck of the draw and have plenty of decisions to make about where to place your pawns and which cards to keep or discard. Our copy only set us back $5 at the flea market. It was issued in the US just one time in 2007, so if you find a complete copy underneath the eBay price, grab it!

Do you have a favorite game designer?