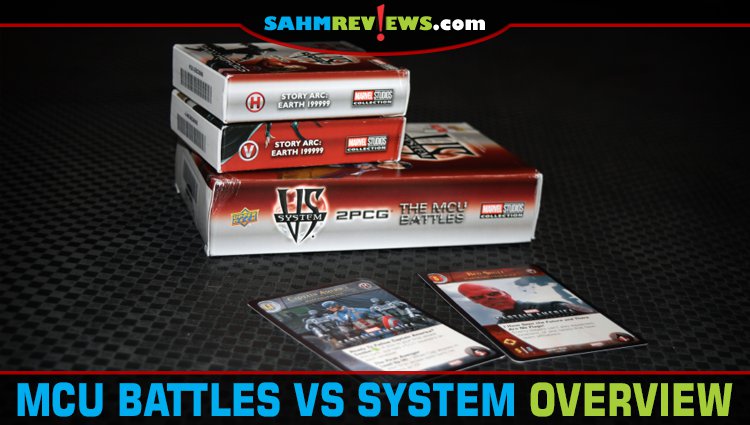 There’s one thing that amazes me whenever we’re at conventions or game stores where multiple people are playing games. The number of people participating in two player card games. There are entire tournaments devoted to the hobby and a secondary market for people who want to collect the best or beef up their tournament deck. While the girls were interested in Pokémon for a while and I enjoyed playing Star Realms, we never ventured too deep down that rabbit hole with any of the other games of this genre. Of course, that rabbit hole may be calling our names after all. Upper Deck Entertainment recently sent us a package containing the Vs. System® 2PCG® Giant Pack and two add-on packs. But these aren’t just an ordinary card game system, they’re licensed from Marvel and are entirely based on the Marvel Cinematic Universe! And it’s no secret how we feel about the MCU!

Before I talk about this specific game, it’s important to discuss the system itself. It’s a card game for 2-4 players with each person having their own deck of characters, locations, equipment and plot twists. There are two universes (Illustrated and Photographic) with all things before the MCU arc falling into the Illustrated Universe and all after including actual photographs from MCU movies and television shows. When you build your starting deck, you focus on one of the two universes. Your opponent(s) can opt for the same or the opposite.

Each player begins with a main character then throughout the game plays resources, recruits supporting characters and organizes attacks on the opponent with the ultimate goal of knocking out their main character before they do the same to you. Each deck is made up of 60 cards in addition to the main character. To set up the game, craft your deck of cards (there are recommendations in the instructions for those unfamiliar), place the tokens and counters near the play area. The Level 2 version of the main character is set aside and the deck placed next to the back row. Players then take turns adding their main character to either the front (for melee) or back (for ranged) row of their play area. Shuffle your deck and draw seven cards to start.

There are four phases to a game of Vs: Draw, Recovery, Build and Main. Each player will run through all four phases before play passes to opponent (or the next player on their left in a 3-4 player game). At the beginning of the Draw Phase, any cards that activate “at the beginning of your turn” are handled first. Then the player draws two cards. Next, all stunned characters are readied during the Recovery Phase.

The Build Phase is a little more involved as it has three steps that are completed in order. First, you may add a card to a third row of your play area which is designated as a Resource Row. This row contains face-up locations or face-down cards that are used to recruit supporting characters or play equipment. Recruiting is the second step of the Build Phase. For each card in your Resource Row, you’ll gain 1 point to be used as noted above. Finally, rearrange your character’s locations during the Formation Step before moving on to the Main Phase.

While the Main Phase is the meat of the game, it’s actually pretty short to explain. This is where you attack. Exhaust a character (or team) to engage in combat then you may opt to play a “Combat” plot twist or super power. That special card is resolved then your opponent may do the same. Resolve the combat by both players simultaneously striking. There are four possible outcomes to combat: No one gets stunned, the attacker or defender does or both do. After that combat, you may opt to engage again with readied characters or end your turn and leave some characters active to defend.

And just like in the movies, there are plot twists and other things happening that stir up the pot. These cards do things like add power to characters. Some characters such as The Winter Soldier are affiliated with both the Heroes and the Villains because that’s how his character aligned during the movies!

The game is over when one of the main characters is knocked out in a two player game or all but one are KO’d in a 3-4 person game. Card battle games are wildly popular by people of all ages, but it’s often difficult to find one that resonates enough to revisit it over and over. The MCU Battle editions of Upper Deck’s Vs 2PCG System not only give Marvel fans something to geek over, but additional arcs will be released to continue to evolve the universe in card form. Order decks direct from Upper Deck Entertainment, from your local game store or online at Amazon. They’ve clued us in to some other exciting news coming so tune in to their social channels (Facebook, Twitter, Instagram) to find out what else is happening!

The question is… will you play the Heroes or the Villains?