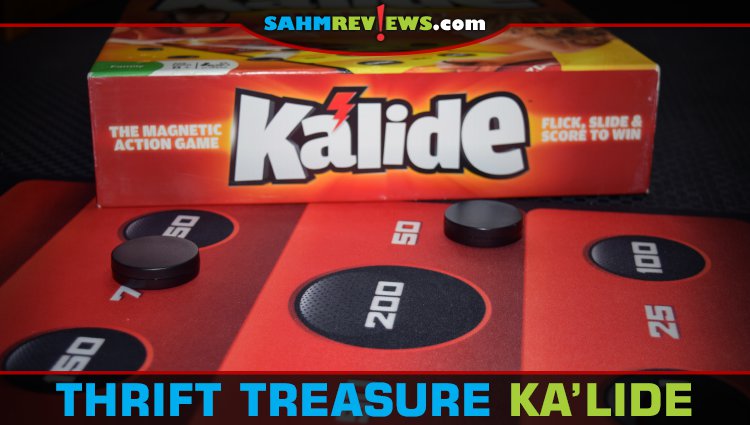 Among all the deals found during the flea market at Geekway to the West, there are always many to be had for a dollar or two. These are typically the same mass-market games we’ll find at Goodwill. We can count on finding a lot that we need for our collection and at that price it’s worth taking a chance.

This week’s Thrift Treasure is one of those such deals. It was only $1 and 100% complete. It’s not that old of a game, having been published in 2011. Neoprene game mats haven’t been around for long, so this must be among the first games to feature one. Along with the colorful mat are a dozen plastic, but magnetic, discs.

You might consider Ka’lide a tabletop version of curling, the oddly popular Olympic sport. Instead of sliding on ice, using brooms, and working from the same side, players will flick their discs in opposite directions. The mat has identical scoring areas on both ends and any discs in those areas will score for that player.

Did I mention the discs are magnetic? This created some interesting shots as you don’t know if one will repel or attract. When two or more are connected magnetically, they will all score the highest amount touched by any disc. Single discs also score for the highest area they are in. Unless any of them touch the “dead zone” in the middle of the mat. This voids all scoring for any which are connected. All discs that leave the mat entirely are left in place but do not score either.

Ka’lide is played over three complete rounds of each player taking turns flicking six discs. After the completion of a round, scores are tallied on any piece of paper (not included). For the final round, even though the rules didn’t state it, we elected to give the player in second place the option of whether to go first or second. The player with the highest total score after three rounds is the winner of Ka’lide!

This is another recent game that was only issued once and then went out of production. You can still find a copy or two on eBay if you hurry. Your best bet is to try to find one at thrift or a local yard sale. There isn’t much to the game, so I wouldn’t pay more than a couple of dollars for one in good condition.

What recent game have you found to be hard to find?