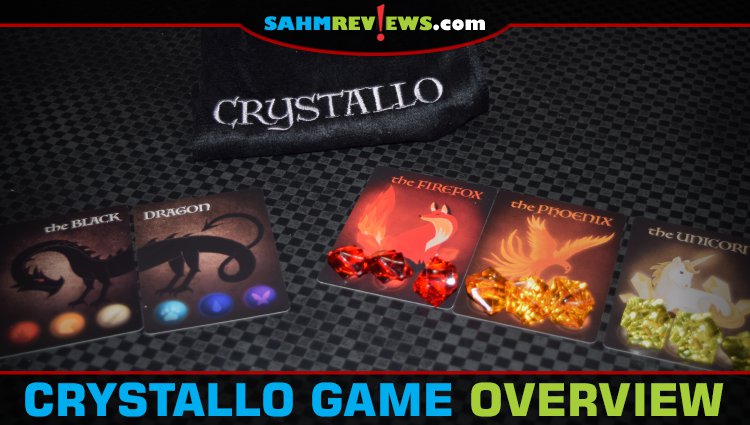 The last several months have been a bit overwhelming. Madison wrapped up her freshman year at college, Kennedy graduated from high school, Scott’s next game is gearing up for release and I was elected to the board of directors for The Game Manufacturers Association (GAMA) which is the game industry’s trade organization. Several matters with my part time accounting job have really taxed my personal bandwidth. As we were getting ready to head off to Origins, I could really feel my anxiety rising so I decided to sit down and play a solitaire game of Crystallo which had been provided to us by Deep Water Games last fall.

As much as I love playing games with the family, sometimes our busy schedules don’t align. And desperately needed to walk away from my computer for a bit, I decided that Crystallo might be a good option. In hindsight, fighting dark dragons in order to save magical creatures isn’t exactly the stress-free experience I expected it to be. At least it was easy to set up and get playing. You pretty much sort the dragons and creatures out, placing them on the play area, then shuffle the cavern cards. Gems are placed on the creature cards then nine cavern cards are set aside for the final battle.

The idea behind the game is that you’re attempting to free the creatures by exploring the cavern and creating crystal sets. When you combine crystals, they activate an orb that draws the power from one of the corresponding orbs that is controlling the fate of the creatures.

Exploration is the process of drawing cavern cards one at a time then aligning the crystals near each other in groups. Acceptable groupings include three crystals that are the 1) same color and shape, 2) same color but different shape, 3) same shape but different color or 4) different shape and color. The square is completed by one of the orbs mentioned above. Treasures acquired during exploration phase have special effects as well.

When all the bonds from the creatures have been released, you’re ready to trap the Black Dragon. You’ll utilize the nine cavern cards reserved during setup along with any additional left over from the exploration phase.

Turn them face up then repeat the four-square process, using the orbs to charge up the ones on the Black Dragon cards, trapping him in the same way he trapped the magical creatures. Your title is calculated based on whether you are able to free all the magical creatures, run out of cards during exploration or how efficiently you worked to trap the Black Dragon. Now you’re ready to play then use your score as a benchmark to play again for a better rank.

The bulk of the game is the puzzle-like nature needed to trigger the orbs/crystals. While it’s themed as dragons, I didn’t feel like the game is married to the theme. It could have just as easily been an abstract game so don’t let the theme scare you away from introducing this to younger family members. You can find copies of the game on Amazon or possibly from Deep Water Games. As you can see from that article, this game had a rocky start prior to arriving at Deep Water Games. They have a lot of other products in their catalog and regularly share news on Facebook and Twitter. Be sure to check them out!

What types of games or puzzles do you use to decompress?