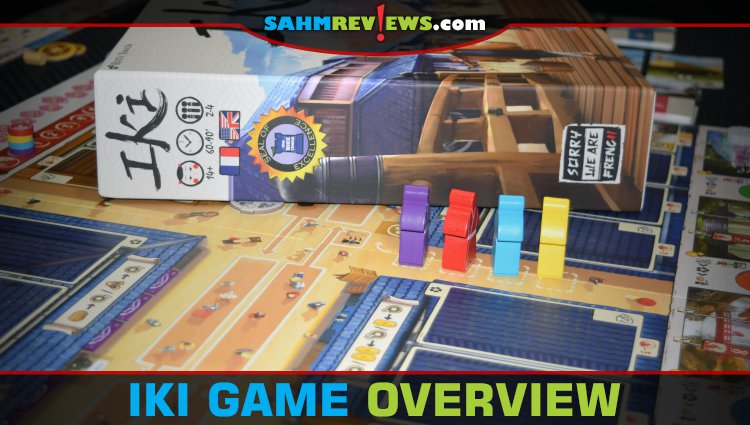 There was a time that we had a pretty regular schedule. We went to the movies, shopping and traveled. We would visit street fairs, farmer’s markets, concerts, festivals and sporting events. While we weren’t constantly on the move, we did randomly include these things into our busy schedules to help break up the monotony. Then everything got locked down and we stopped doing a lot of things. This past Saturday we went to the farmer’s market for the first time in I don’t know how long. The location was the same but the layout was very different because the building next to it now had active business in it. The market couldn’t use their parking lot like they had for many years while the building was mostly vacant of non-farmer’s market vendors. It was interesting to discover a different flow to something that used to be very familiar to us. We returned home with a bagful of fresh produce and a renewed interest in returning. Then for Sunday game day with our friends, we decided to play Iki, a street market-themed game from Gigamic and Hachette Boardgames US.

Before I explain the game, I have to confess that I was unfamiliar with it, despite discovering it was originally released in 2015 and carrying a promising 7.7 rating on Board Game Geek. Iki is a strategy game that offers multiple different opportunities to earn points. Give each player a player board and the meeples in their available color then place the main board in the center of the table. There are 13 rounds with as assortment of places where cards and tokens are replenished so randomize the stacks in preparation for the game. The object will be to accumulate the most points through various activities such as building, hiring vendors, diversifying your staff, purchasing fish or tobacco and creating a sense of harmony in the market.

Iki is divided into 12 rounds corresponding to the calendar year and the four seasons then wraps up with a final “New Year’s Day” action. While New Year’s Day is handled differently, all the others are the same with each consisting of three phases. The first phase determines the turn order, the second is the action and the final is the event.

Just like in real life, Iki involves walking in circles around the stalls of the market. Each stall has an action associated with it, but players have the option of hiring a worker at the beginning of their turn in lieu of taking income. In doing so, you’ll be able to place it anywhere you like and anybody, including you, can land on that space and take that action as well. There are a few catches: 1) you have to be able to pay their purchase price 2) you must have a meeple available to place on the card and 3) at the end of the season, you must pay one rice for each on the board.

Whenever another player takes your action, your worker gains experience and eventually retires. Where you opt to place the worker makes a difference because you’ll earn harmony points for the type and number of workers in each sector. As your artisans get more experience, they’ll earn more income for you as part of the end of season actions so it’s worth encouraging people to stop by your space!

In addition to needing to feed the workers, you also must be aware of potential consequences of not properly equipping your stall with fire protection. A few times during the game, a fire token is randomly drawn and fire begins to tear through that section of the market, starting from the outside of the board and working inward. If someone has enough on the fire track, they can put out the fire. If not, those cards are removed from the game. The fire track also determines the order in which people can select their movement option for the round.

Let’s talk about movement for a minute because it really does make things interesting. There are five possible movement options each round. One, Two, Three, Four and 1-4. The first four options allow the player to take four income or hire a worker in addition to moving that exact number of spaces selected. The latter allows the player to take one income only then move any of the four space options. While the person with the highest placement on the fire track gets to select their movement first, the actions are resolved as noted on the board. Players can turn in a sandal token (one of the many components in the game) in order to move one additional space.

At the end of each season, you’ll earn income based on how experienced your workers are. That includes the ones still working as well as those who have retired. Continue hiring, paying and retiring workers, collecting resources, building buildings and accumulating points. Following the New Year’s Day actions, final scoring is calculated (based on numerous criteria) to determine who was the most successful.

There’s a lot going on in Iki, but it’s actually not overwhelming difficult to understand. With multiple ways to earn points, you can select a path and if it isn’t successful then try a different way the next time. As with other games of this type, you can’t do everything so don’t fret when you realize something isn’t possible. Copies are currently available on the Hachette Boardgames website as well as on Amazon. Ask at your local game store or check it out at an upcoming gaming convention! Follow Hachette Boardgames or Gigamic on social media (Hachette Facebook, Twitter; Gigamic Facebook, Twitter) to find out what other games are part of their lengthy catalog!