Like many families, we gather around the table during the holiday season and play a game or two with cousins, nieces and nephews we only see during this time of year. Most often it is a few rounds of Hearts or Spades, classic card games that are easy to teach and are light enough to allow for great conversation while playing. They’re both played with a regular deck of cards and are little more than highest card wins the trick.

Recently we’ve feature a number of trick-taking card games as an alternative to the classics. Creature Clash was a thrift store find with art that will appeal to the youngest of players. Eagle-Gryphon Games’ Sluff Off! introduced tokens that are your predictions of how you will fare in that round. Tournament at Camelot is supplied with tarot-sized cards, my personal favorite, and adds a fantasy flair to the otherwise mundane theme of a regular trick-taking game. 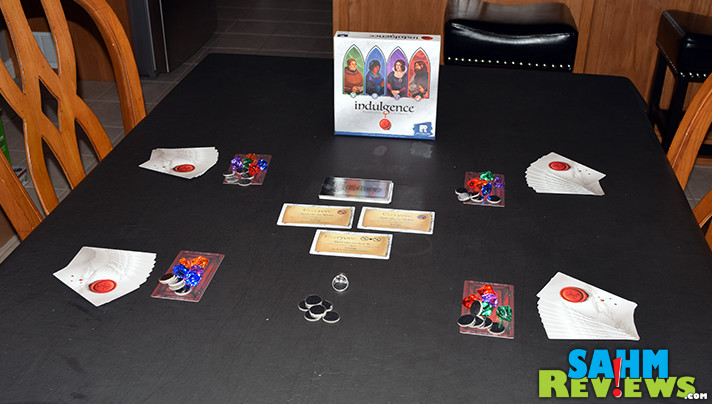 So after featuring these great alternatives, and also highlighting nearly twenty other card games in this year’s Holiday Gift Guide, we found another trick-taking card game that still manages to bring something new to the table. And it turns out that Restoration Games‘ Indulgence is a remake of Dragonmaster, a Milton-Bradley game from the early 80’s, re-imagined to bring it up-to-date and in-line with what is expected from today’s games. 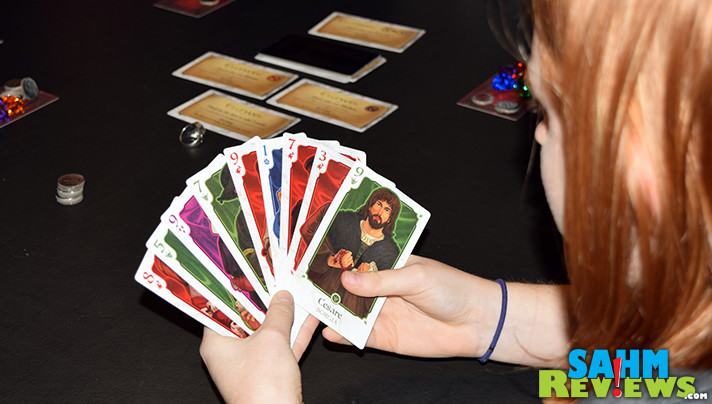 Remember how I said tarot-sized cards were my favorite? Indulgence has tarot-sized cards! Instead of suits like diamonds, spades, etc., the four suits are represented as families. Each family is made up of nine cards in total, numbered one through nine. These are shuffled and dealt out completely to all players (Indulgence supports up to four participants). 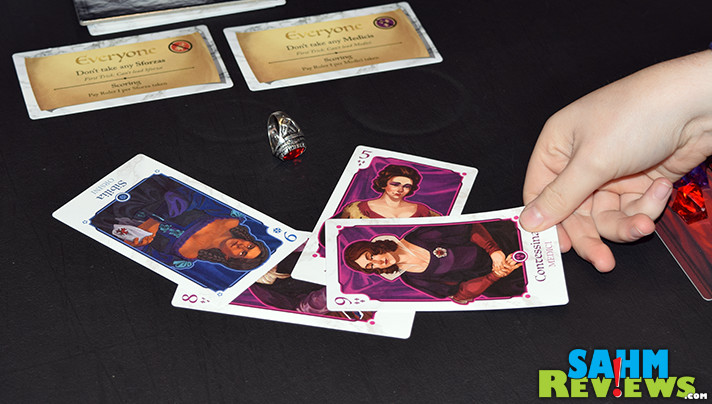 The starting player, called the Ruler, plays a card and everyone else must play the exact same suit if they have one in their hand. Otherwise they may play any other card. The person who plays the highest-numbered card of the lead suit wins the trick. Now I know what you’re thinking, “This is just Hearts or Spades with fancy artwork!” If that was all there was to Indulgence, you would be correct. 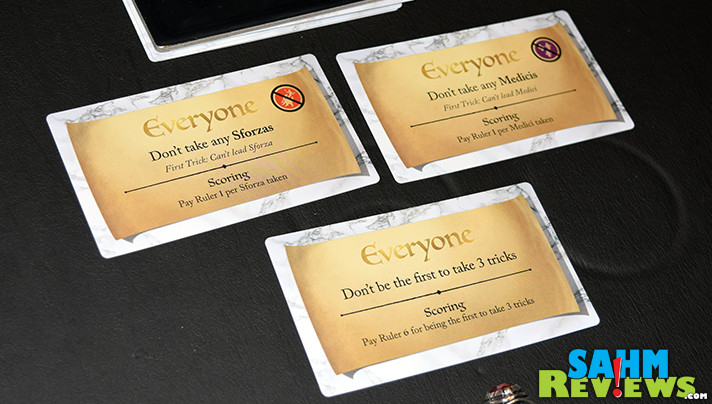 Also included are 20 Edict cards, of which three are randomly dealt to the center of the play area. At the beginning of a hand, the Ruler chooses one of the Edicts to follow. These cards change the rules of the game or gives the Ruler (or everyone) a goal to try to achieve. Failing to follow the Edict will result in paying Florin (the game’s currency) to the Ruler. 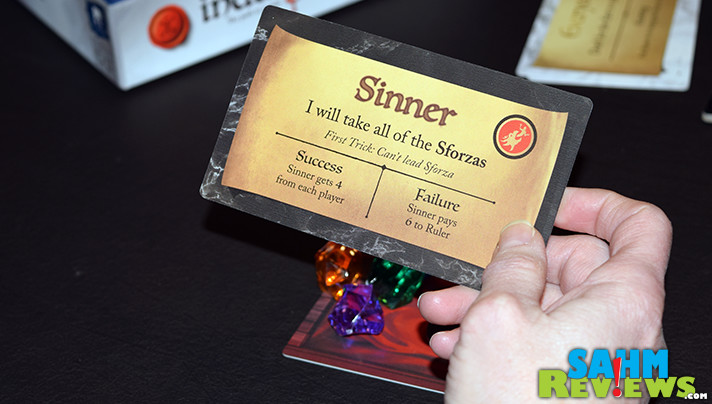 Each hand a different Edict is selected, making Indulgence a LOT more challenging than a classic card game. In addition, when the Edict is revealed, any player may elect to become a sinner by taking the Edict card and placing it in from of them, turning it over to the Sin side. Much like trying to take all the tricks in a game of Hearts, the Sin side challenges the sinner to (usually) do the exact opposite of the Edict and not miss a single one. If they succeed by taking all the forbidden cards, the other players pay Florins to them. If they fail, they still pay the Ruler. 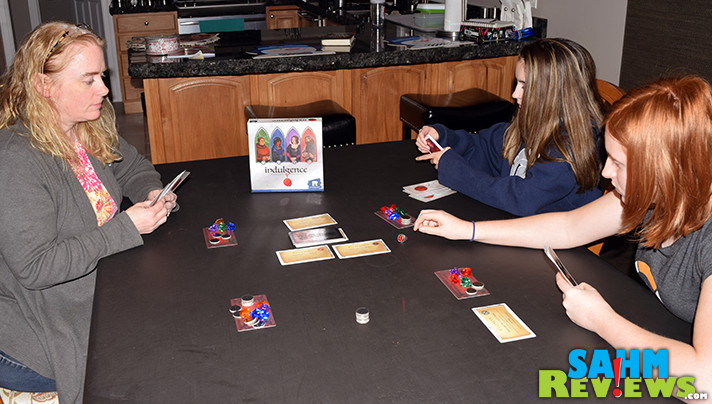 Indulgence is played over a number of rounds until every person has had three opportunities of playing as the Ruler. You will collect and pay out Florins over the course of the game, and the player with the highest total of Florins at the end is declared the winner.

With the inclusion of Edict cards, Indulgence adds the need to be concerned with the contents of the tricks you take, not just awarding you for winning a trick. And since this changes from round to round, your strategy for one hand will be vastly different from the next. 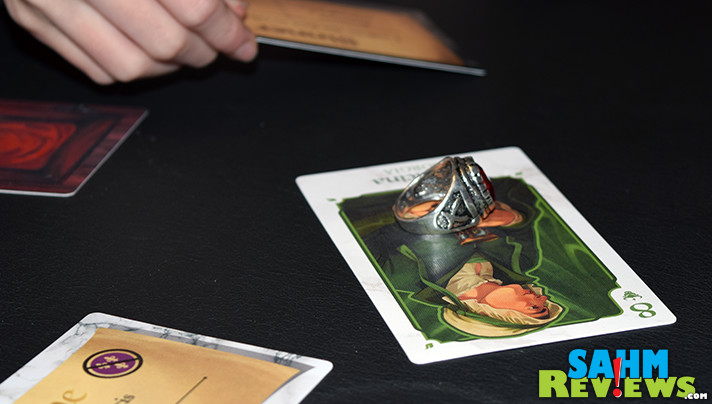 Don’t let the semi-religious theme put you off from enjoying Indulgence. Other than some of the terminology used to put the game in an Italian Renaissance setting and the real family figures depicted on the cards, there are no religious undertones of the game play at all. In fact, you may find humor in playing a game where families are fighting with each other to impress – sounds like many of our holiday gatherings!

At under $20 on Amazon, Indulgence is a great solution if you’re looking for something to replace those (boring) classic card games. Be sure to check out what Restoration Games is up to by checking out their website and following them on Facebook and Twitter. You may remember our article on their first release, Downforce, which is another classic game brought up to speed with modern artwork and mechanics. That’s their specialty and we can’t wait to find out what is next!

What is your go-to card game to play with family this season?