If you’re familiar with WizKids, it’s probably because you’re a fan of one of their collectible games like HeroClix, Dice Masters or Attack Wing. These are all competitive games where you field your own custom ‘army’ of cards, dice or miniatures against an opponent in a battle to the death. The strategies of these games is constantly changing as WizKids issues new characters that have different powers, strengths and features. No one person will ever have the perfect team since there is always a ‘scissors’ to their ‘rock’.

But what you may not realize is that recently WizKids has begun producing titles distinctly different from their core product line. Over the coming months we’ll be introducing you to a number of new (and older) games by WizKids and we think you’ll agree, this is a big departure from their typical game offerings. And one that it looks like they’re already succeeding at. Let’s take a quick look at two of their first card games, both of which were available for purchase at this year’s Origins Game Fair.

I’ve played a lot of card games over the years, but nothing quite as unique as Fantasy Realms. Your goal is to build up the mightiest realm in the world, but you are limited to only seven cards! Fortunately, by collecting the right cards, you can create powerful combinations that prove that the total is greater than the sum of its parts. 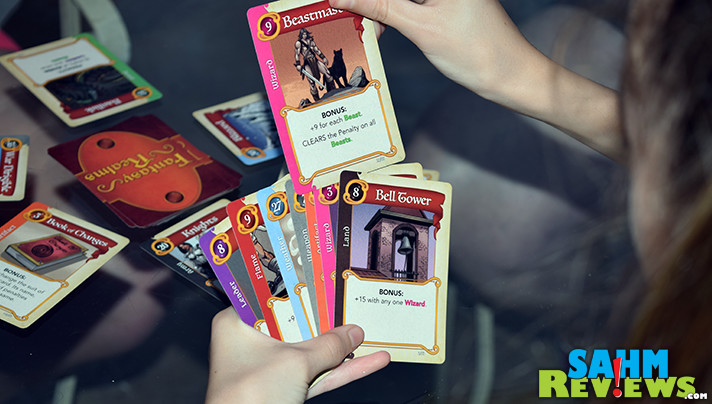 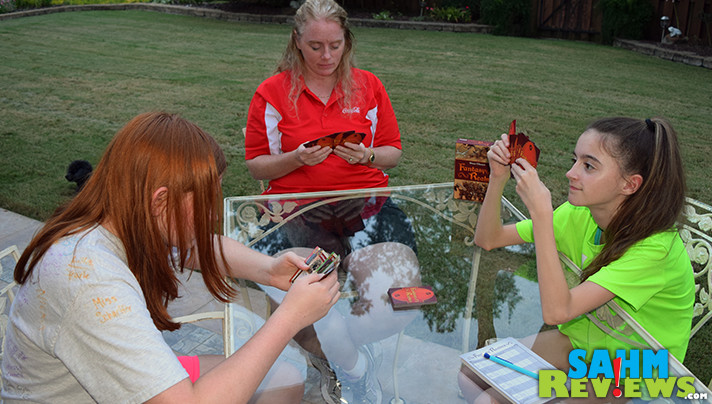 What make Fantasy Realms different than just collecting sets is every card has some type of bonus or penalty, usually taking effect if another card is also present in your hand. This is what makes drawing from the discard area so powerful, as you’ll know exactly what you’re getting (and it hopefully pairs up with something powerful in your hand!). 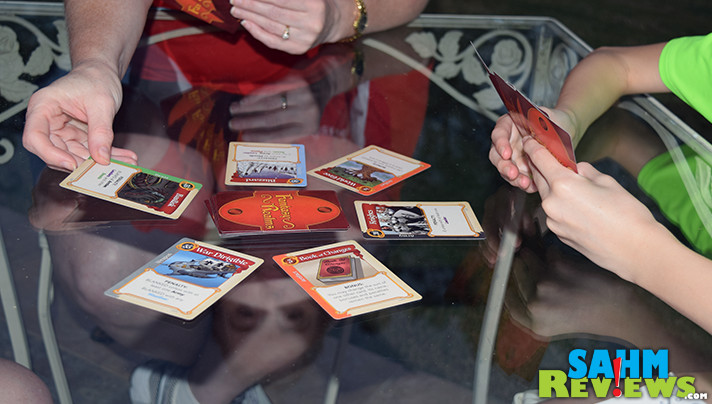 The game ends when there are ten cards in the discard area. Scores are tallied using the included sheets and the player with the highest scoring hand wins! Expect a game of Fantasy Realms to only last 15-20 minutes – plenty of time for multiple rounds! 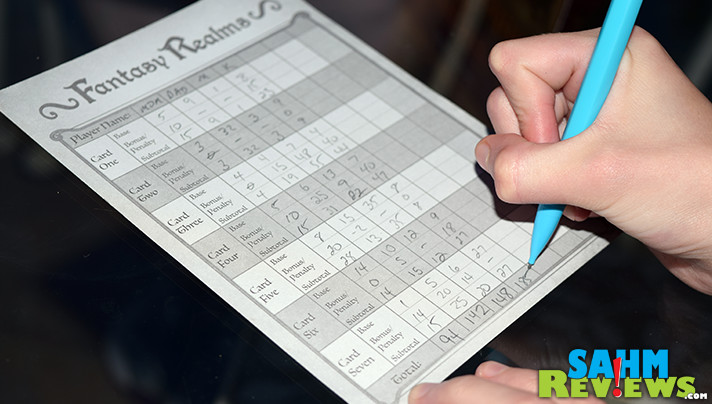 Copies of Fantasy Realms can be found on Amazon for under $20 or from your local game store!

The first thing that attracted me to Tournament at Camelot is the oversized (tarot) cards. My eyes aren’t what they used to be, and having cards that don’t require reading glasses is a huge plus in my book. 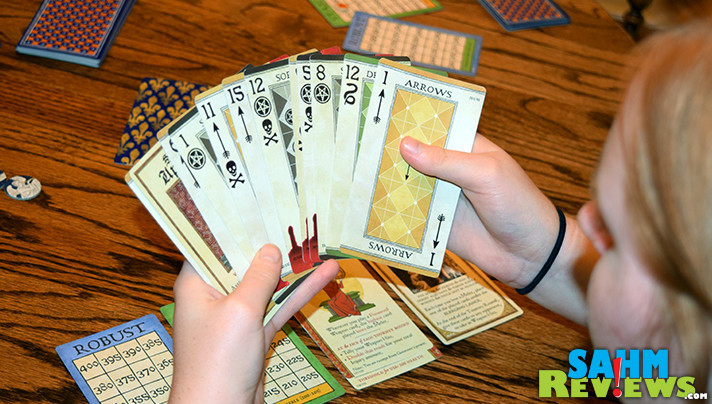 Tournament at Camelot is exactly what you think it is – a card-based tournament where each person represents a Protagonist doing battle against all opponents. Unlike Fantasy Realms, it is a trick-taking game that you’ll recognize as being similar to Hearts or Spades. Except that it is played backwards. That will make sense in a minute.

The deck of cards is made up of four suits (swords, arrows, sorcery and deception) along with a “wild” suit (alchemy). Additionally, Merlin and Sorcerer’s Apprentice cards are also randomly shuffled in and may be played at any time. In most trick-taking card games, you actually want to take the hand. Not so in Tournament at Camelot – taken cards represent damage to your Protagonist at the end of the round. Ultimately you want to take no tricks at all, but that is rather unlikely. 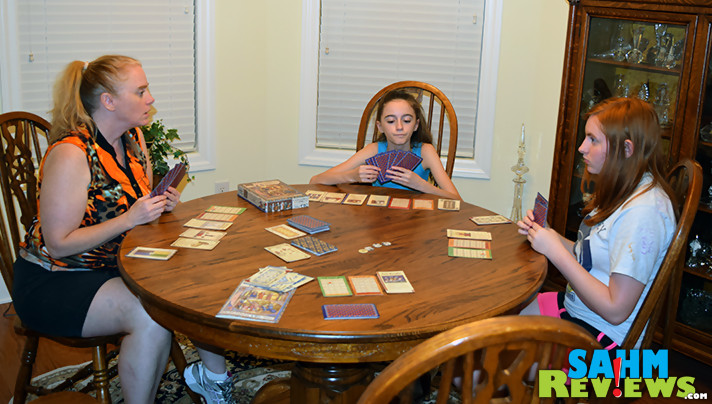 Once a lead suit is played, everyone must follow suit and play one card. Instead of the suit, the previously-mentioned Merline and Sorcerer’s Apprentice cards may be played, following the card’s instructions. If you don’t have the right suit, you can then play one of the wild “alchemy” cards, but still using the card value. Can’t do either? Discard a card from your hand and take 5 points of damage. 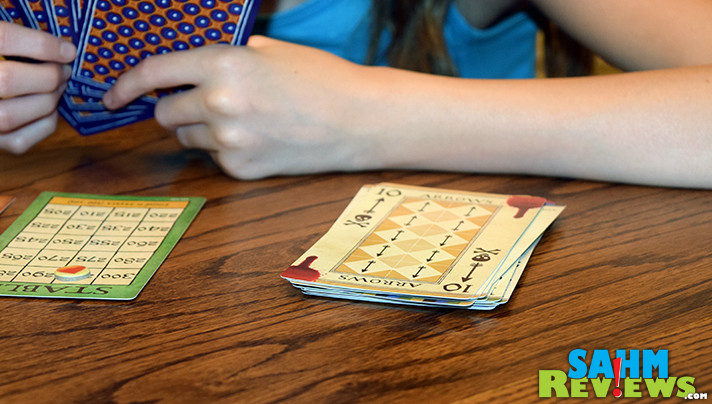 Once everyone has played their card, the lowest-valued card on the board takes the trick and collects the cards to their area. But if there were any ties, those cards are turned over and ignored. Only then is the lowest determined. It is possible that everyone will be tied and those cards are saved until the next round! 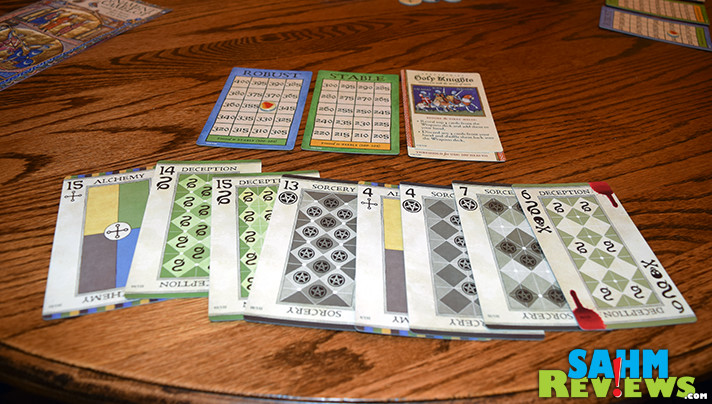 After 12 tricks, players tally the cards they have collected and subtract five points for every regular card they received. Ten points are deducted for any cards with poison on them (a red blood splatter) and a whopping 25 points if you ‘won’ a Merlin! Each player begins with 400 health points and the rounds continue until one person is killed. Then the person with the highest health is declared the winner.

What’s unique about Tournament at Camelot is the various catch-up mechanisms. To prevent someone from pulling far ahead thanks to a lucky draw, players with the lowest health receive a “Godsend” card at the beginning of each round. These provide powerful one-time bonuses that may be used at almost any time during the next round. If you fall behind 100 or 200 points, you’ll receive an additional one or two “Godsend” cards! 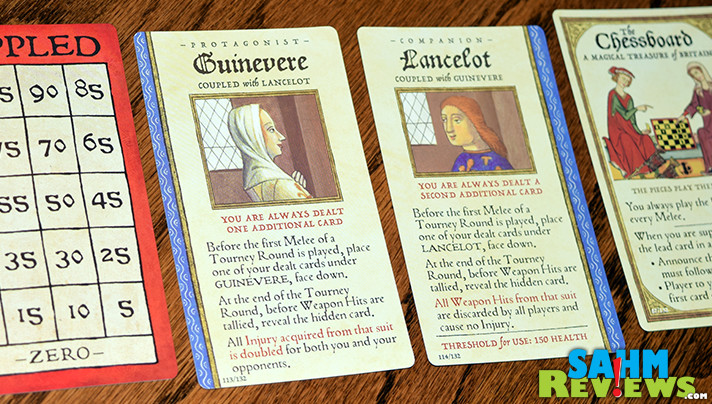 Each Protagonist has their own special abilities, and these are combined with the features of their Companions which come into play once you drop below a certain level of health. Coupled with the Godsend cards, it can be quite difficult to maintain any kind of meaningful lead. We found that most games were decided in the final round!

Tournament of Camelot lasts a little longer than Fantasy Realms, each full game taking about 45 minutes. Your copy is waiting for you on Amazon for under the $25 MSRP, or again at your local game store.

As you can plainly see, WizKids is now offering much more than head-to-head battle games. Based upon what we’ve been given a sneak peek of, there is good reason to be very excited for what’s up next. Make sure you’re following their social media channels so you can be among the first to know! (Facebook, Twitter)

Were you familiar with WizKids’ products before this?