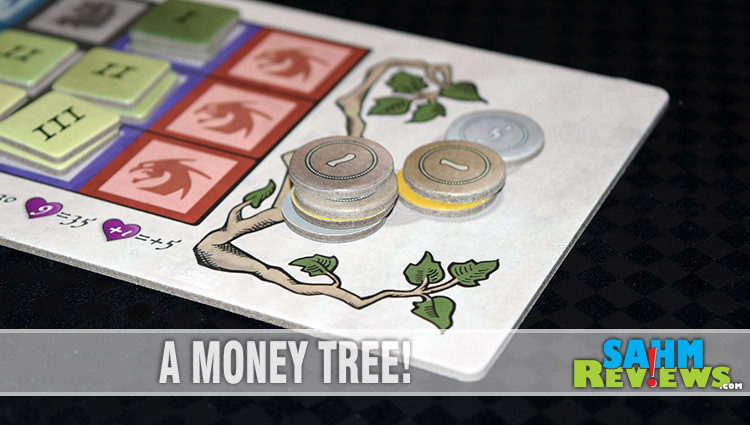 I was listening to an interesting conversation on the radio the other day. It was about surnames but went a step beyond the typical “Should a woman take her husband’s last name?” conversation. This time, it was addressing whether a woman has the ultimate say over the name that will be given to the child or whether the husband (and lineage) should be considered. While I understand the desire for people to name their child something unique, I think a surname should be a given. If the mother and father have different last names, the child should take one or a hyphenated version.

As someone who spent many years trying to research my family tree, I can tell you there’s a lot of frustration when names are different than their ancestors. It was common as people immigrated to the United States and I know of multiple situations where the spelling in the census isn’t the same as the spelling in some other document such as a bible, marriage license or birth announcement in the newspaper. The name will be the same with a different spelling. My mom has spent a lot of time lately researching our family and she is running into the same hiccups that I did… except she has the benefit of utilizing a multitude of digital records that have been uploaded to the internet. 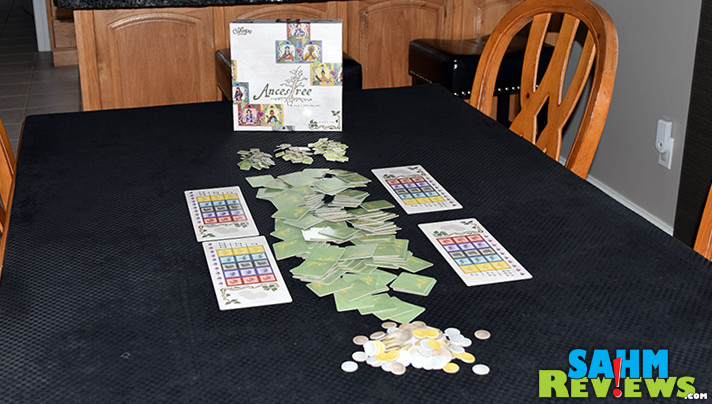 If only it was as simple as finding two people and connected them, then laying out a family tree would be much easier. Naturally, since it can’t be done in real life, we choose to do it in board game form with Ancestree from Calliope Games. Ancestree by designer Eric M. Lang is another in the Titan Series that already includes titles such as Running with the Bulls and Menu Masters. 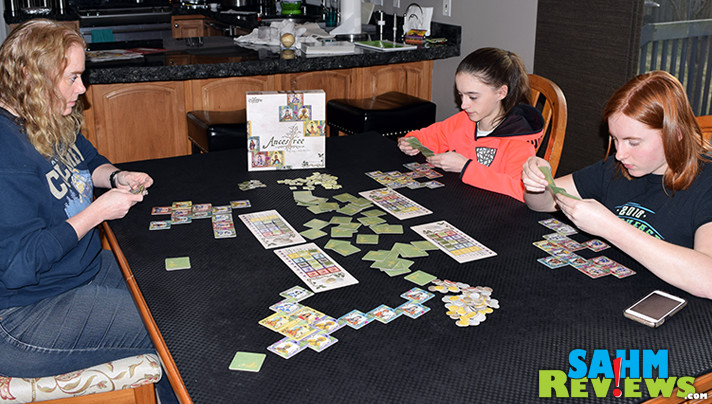 To get started, shuffle all the tiles and place them face down in a pile in the center of the table. Up to six players will each be creating their own family tree tableau so make sure everyone has plenty of open space in front of them. Give each player their own scoreboard and you’re ready to go. Ancestree is played over three rounds consisting of drafting then laying tiles followed by scoring. 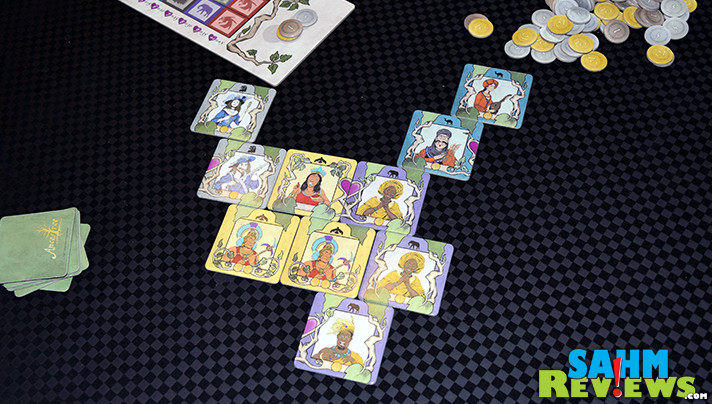 Everyone belongs to one of five great lineages, shown by their border color and family icon. The Ancestor tiles contain a wealth of information about each person. The center of the tile depicts the person with their Heritage family icon displayed above them and their wealth below. The top and bottom borders contain half leaves that help connect parents to their children. On the sides, you’ll find half a heart for connecting by marriage. They all have a purpose and I’ll explain those in a minute. 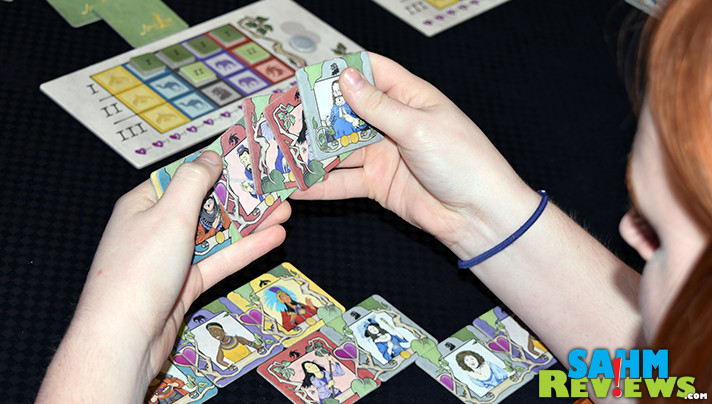 At the beginning of each round, each player randomly draws six Ancestor tiles from the pile to create a hand. Much like Between Two Cities, Sushi Go and Nevermore, you’ll choose one then pass the remainder of the hand to the player next to you. Which direction you pass depends on the round. Everyone plays simultaneously as you add your chosen tile to your family tree. Your first one is easy, but the rest you’ll want to put some thought into. 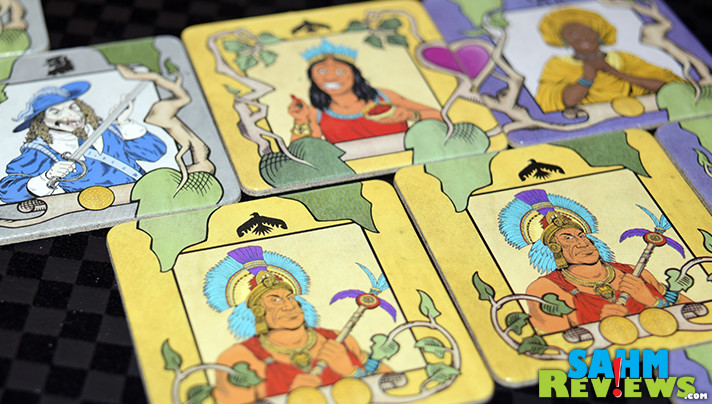 You can connect new family members in two ways: By marriage or as a parent or child. As you may have guessed from my previous explanation of the tile, two half hearts make a marriage while a matching leaf means you’ve added a parent if placed above an existing tile or a child if placed below. Different lineages of family can marry as well as have children. The catch? The tiles have to line up somewhere to be part of the family. Whether it’s by marriage by connecting a heart or parent/child by connecting a leaf, you need to find a place for this person in your Dynasty. If you’re unable to place the one you drafted then you have to discard it. 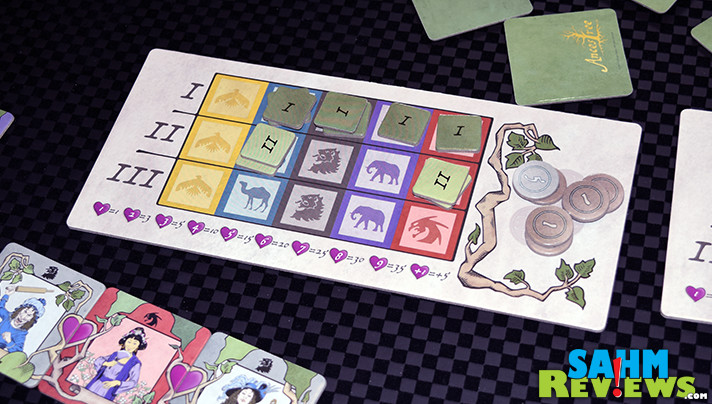 You may be asking what you’re trying to achieve. Or at least how the scoring works so you know what you should place where and why. After choosing and passing 5 times, your Dynasty is scored. But there’s more to it than just tallying what you’ve done. You know the concept of keeping up with the Jones’? That’s what you’re doing here. You’ll compare your Dynasty to the ones on either side of you to score tokens for who has the longest Dynasty of each of the five Heritages. A parent, child and grandchild means you have three levels. A parent and two siblings means you only have two levels. You’ll earn a point for each Dynasty where you bested your neighbor. In addition, you’ll earn Coins for every coin displayed in your Dynasty. 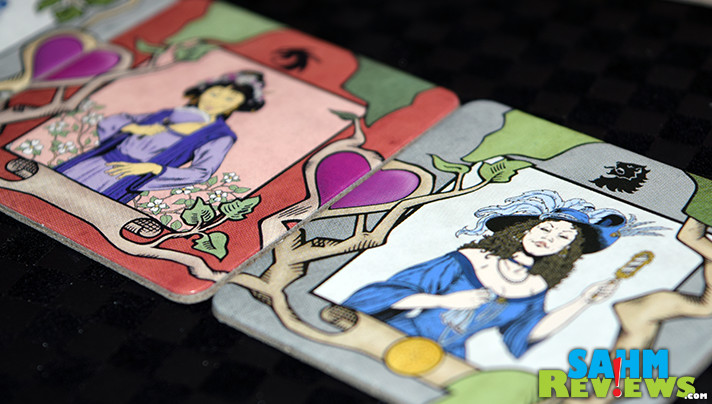 This process happens for three rounds and at the end of the game, you’ll score a bonus for the number of marriages throughout your family tree. With the variety of ways to score, each player can take a different path and still find success. The player with the most victory points can claim to have the best Ancestree.

With simple matching concepts, a basic drafting process and an awesome theme, Ancestree is an excellent choice for a family game night. Take on a more strategic approach and it’s perfect for playing with more seasoned gamers. You can pick up a copy of Ancestree on Amazon for around $27, direct from Calliope Games or ask about it at your local game store. Follow along on Facebook and Twitter to learn about more games that will become part of Calliope Games’ own dynasty.

Have you ever researched your family tree?